Afghanistan: A War in Crisis


The U.S, has announced a potential peace agreement with the Taliban in Afghanistan. Many of the details are still secret or undecided, and the Administration has sent mixed signals about the timing and scale of U.S. force cuts. President Trump announced shortly before reports the U.S. had agreed to the basic structure of a peace deal that he would cut U.S. forces.

He described these cuts as follows in an interview on Fox News on 29 August, “we're going down to 8,600 and then we make a determination from there as to what happens. We'll make a determination, but we're going down to 8,600, we're bringing it down. We have it very well controlled. You know, we're not fighting a war over there, we're just policeman over there. We could win that war so fast — if I wanted to kill 10 million people, Brian, which I don't. I'm not looking to kill a big portion of that country. I'm not looking to do that.”

On September 2nd, in the middle of new Taliban attacks, the U.S announced a draft peace agreement between the United States and the Taliban that withdraws 5,400 U.S. troops from five bases in Afghanistan within five months – or 135 days – after the deal was signed. U.S. peace envoy Zalmay Khalilzad described the proposed plan in a broadcast on TOLO News as “an agreement with the Taliban in principle” although he cautioned that “it is not final until the president of the United States also agrees to it.” He stated that such a withdrawal would depend on the Taliban meeting the terms of the agreement, ending its ties to Al-Qaida, and provide clear guarantees to support counterterrorism activities.

Presumably, far more details will become apparent with time, but it is all too clear that any peace agreement will have to be a highly uncertain option, and it is far from clear what guarantees the U.S. will make to secure it, or what levels of military and civil aid it will pledge. Earlier media reports indicated that the Administration was considering a full withdrawal within a year of a ceasefire, but no report has had any official confirmation.

It is also unclear that the U.S. has the option of staying in Afghanistan without providing open-ended military and financial support. Much depends on current trends in the war, and the extent to which the Afghan Government or the Taliban are winning control and influence over the country, and a detailed review of the fighting shows that it is the Taliban that is making progress even while the Afghan forces still have major U.S. combat air, U.S. train and assist, and U.S. land combat support from elite force elements.

Much depends on the degree to which the Afghan government forces can stand on their own if a peace negotiation leads to the withdrawal of U.S. and Resolute support forces, or if the U.S. makes major further force cuts. At present, it seems doubtful that Afghan force can survive if the Taliban should use the peace process to secure a U.S. withdrawal and then turn on the Afghan government.

At the same time, the civil sector is weak and making marginal progress at best. The Afghan government remains weak and divided, the economy and government budget are heavily dependent on outside aid, and efforts to make aid conditional on Afghan performance has so far had only limited success.

The end result is that both peace and any open-ended effort to stay are both likely to be bad options, and the U.S. will be forced to choose between them. If the peace process should fail, it is doubtful that Afghan forces can survive without ongoing U.S. combat air support, help from U.S. elite forces, and forward deployed security assistance brigades indefinitely.

It is equally uncertain that even if Afghanistan can unite around some future President, that it can survive its gross failures in governance, the rule of law, and economic development without equally indefinite billions of dollars in U.S. civil aid. A detailed analysis of the civil side of the war shows that Afghanistan is still the equivalent of a failed state.

Understanding the Trends that Shape a Possible Peace and U.S. Capability to Stay

The Burke Chair at CSIS has updated and expanded a report that uses official reports, maps, and graphics to examine Afghan military and civil progress, or the lack of it, in full detail. It draws on official reporting by the Resolute Support Command, the Office of the Secretary of Defense (1225 Report), the Lead Inspector General for Overseas Contingency Operations (LIG-OCO), the Special Inspector General for Afghan Reconstruction (SIGAR), and the United Nations. At the same time, it draws upon a variety of outside sources that raise serious questions about the accuracy of some of this official reporting.

The report is entitled Afghanistan: A War in Crisis. It is available on the CSIS web site at https://csis-website-prod.s3.amazonaws.com/s3fs-public/publication/190904_Progress-Afghanistan.pdf. The key military portions of the report are available as a separate report here. The civil portions are available here.

The key sections of the full report include: 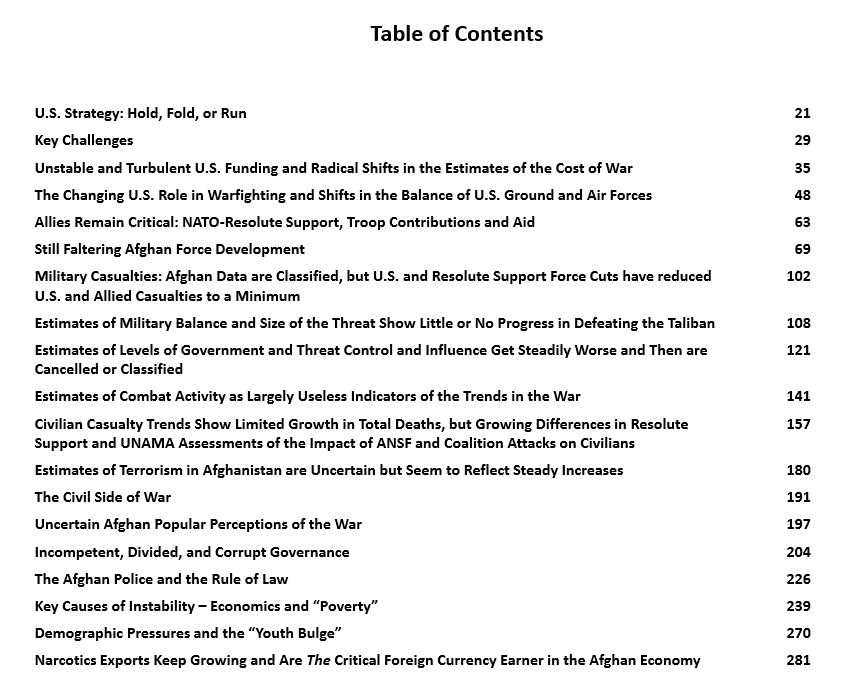 Israel and the Palestinians: From the Two-State Solution to Five Failed “States”
By Anthony H. Cordesman
May 26, 2021
In the News

The Other Sides of Renegotiating the JCPOA Iran Nuclear Agreement
By Anthony H. Cordesman
April 15, 2021
View all content by this expert