After the AUKUS Crisis, Are France-U.S. Relations Back on Track?

“There’s a strong affection, a sense of loyalty and commitment to France. And there is no place in the world where we can’t work together and cooperate,” said President Biden before a highly anticipated meeting with President Macron in Rome on October 29. These strong words stress the U.S. commitment to repair damaged bilateral ties with France after weeks of diplomatic tensions. Franco-American relations have reached a historic low point after the surprise announcement in mid-September of AUKUS, a security partnership between the United States, the United Kingdom, and Australia. French authorities felt blindsided by this partnership negotiated at the expense of its interests in the Indo-Pacific. Paris reacted strongly to make an impression by recalling its ambassadors to the United States and Australia for the first time.

While France’s relations with Canberra and London are still in disarray and will take time to mend, Paris and Washington have managed to come out of this crisis rather quickly. An extraordinary number of high-level U.S. visits to Paris culminated in the development of an ambitious roadmap paving the way for stronger bilateral and transatlantic cooperation in key areas from the Indo-Pacific to the fight against terrorism and European security. If AUKUS unnecessarily eroded France-U.S. ties, there might be a silver lining from this diplomatic crisis: this shocking episode forced Washington to revisit the way its relationship with France and its European allies generally was working. Now starts the hard part of translating these good intentions into tangible and lasting results.

Washington and Paris Managed to Turn the Tide

The announcement of AUKUS resulted in an unprecedented diplomatic crisis between Washington and Paris. While France’s anger was at first perceived as a bruised ego over the loss of a lucrative submarine contract with Canberra, Washington quickly came to realize that the situation was far more serious. Paris experienced AUKUS as a “breach of trust,” as stressed by the French foreign minister, because of the total lack of consultation from Washington, Canberra, and London over a partnership directly impacting and limiting France’s strategy in the Indo-Pacific region. The White House understood the larger implications of this crisis and decided to take the necessary steps to reset relations with France.

While the United Kingdom and Australia have not admitted any wrongdoing toward France so far, the Biden administration acknowledged that things should have been handled differently. Following a first phone call on September 22, President Biden and President Macron agreed that “the situation would have benefited from open consultations among allies.” Similarly, during the bilateral meeting in Rome, President Biden recognized that his administration had been “clumsy” in its handling of AUKUS and added that he “was under the impression that France had been informed long before.” Following the meeting, President Macron explained that both countries “clarified together what we had to clarify.”

Washington understood that tangible commitments would also be needed to demonstrate its genuine desire to repair and improve its partnership with France. Instead of agreeing on short-term compensatory measures, France and the United States engaged in high-level consultations for several weeks to develop robust initiatives. Secretary of State Antony Blinken and National Security Advisor Jake Sullivan went to Paris, while Secretary of Defense Lloyd Austin met with his French counterpart, Minister of the Armed Forces Florence Parly. Vice President Kamala Harris also recently visited Paris for four days.

These consultations resulted in a United States-France Joint Statement, which underscores the need for “systematic and in-depth consultation and coordination” between Paris and Washington on “policies and initiatives that are of respective interest.” This commitment is important, as France and other European countries were increasingly concerned by the lack of genuine consultation coming from the Biden administration, as was the case with the U.S. withdrawal from Afghanistan. This engagement toward more transparency is a two-way street. As underlined in the joint statement, Paris will keep the United States “closely informed” of its priorities for its presidency of the Council of the European Union during the first half of 2022.

Both countries have also agreed to intensify their military cooperation in the Sahel, the Levant, and the Indo-Pacific. In the Sahel, Washington will commit “additional assets” to support counterterrorism efforts led by France and its European partners. In the Levant, Paris and Washington will pursue their “military efforts in Iraq and Syria to ensure the enduring defeat of ISIS.” This is particularly important as the United States contemplates the withdrawal of its remaining forces in Iraq. President Macron has already announced last August that French forces will remain in Iraq regardless of the U.S. force posture decision. Finally, the United States will “increase its support” to French and European air and maritime deployments in the Indo-Pacific.

Positive Outcome for France . . . and Europe?

Even though the joint statement is bilateral, its content goes beyond the U.S.-France relationship. The terms “Europe” or “European” are mentioned 12 times across the declaration, almost as much as “France” (14 times). While both countries stress their strong support for NATO as a pillar of Euro-Atlantic security, Washington “recognizes the importance of a stronger and more capable European defense that contributes to global and transatlantic security and is complementary to NATO”. Washington notably acknowledges the benefits of “stronger European military capabilities” and enhanced European operations—especially in the Sahel.

This is a shift in U.S. policy toward European defense, as previous U.S. administrations have long been reluctant to openly endorse greater European security and defense efforts. Indeed, this ambiguity contributed to existing divisions among European countries that limited their collective ambition. Both sides also reaffirmed the need for closer EU-NATO and EU-U.S. defense cooperation.

The joint statement also recognizes the importance of greater transatlantic cooperation in the Indo-Pacific. While Europe’s role and interests in the region were overlooked by the Biden administration with AUKUS, the declaration underlines the need for a “robust collaboration” not only between France and the United States but also with Europeans at large. Washington notably “welcomes” the European Union’s Indo-Pacific strategy, which was revealed the day after the announcement of AUKUS, and Washington and Brussels recently agreed to hold consultations to explore ways to deepen their cooperation in the Indo-Pacific.

The Biden-Macron meeting was successful in turning the page after the AUKUS crisis and offered a robust roadmap to strengthen the relationship. Yet, this success could be short lived if it is not sustained by steady engagement between Paris and Washington or if future U.S. policy surprises are announced. As President Macron noted, “This is very much the beginning of a process of trust, of confidence, which we’re building together.”

Stronger Franco-American ties must also be embedded in a larger effort to increase transatlantic cooperation through NATO and EU-U.S. channels. This is all the more important as both organizations are developing forward-looking strategies. A final condition for success will be revived relations between France, the United Kingdom, and Australia. Restoring strong defense, security, and economic cooperation between these countries will be critical. This is a challenging but essential task, as proved by the France-U.S. experience. 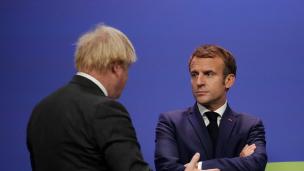 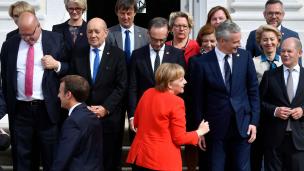 What Is the Future for the French-German Engine?
By Pierre Morcos
October 13, 2021
In the News

Macron says Europeans need to stop being naive and assert independence from the United States
Washington Post | Rick Noack
September 28, 2021
In the News

Is the current between Biden and Macron restored?
Radio Canada | Raphael Bouvier-Auclair
September 22, 2021
View all content by this expert