The United States, its allies, and international organizations are just beginning to come to grips with the civil dimensions of "failed state" wars in Afghanistan, Iraq, Libya, Somalia, Syria, and Yemen. In each case, any meaningful form of "victory" requires far more than defeating the current extremist threat in military terms. The insurgent threat exists largely because of the deep divisions within the state, and the past and current failures of the government to deal with such internal divisions, and the chronic failure to meet the economic, security, and social needs of much of the nation's population.

In practical terms, these failures make the host government as much of a threat to each nation’s stability and future as are Islamic extremists. Regardless of the scale of any defeat of such extremists, the other internal tensions and divisions with each country also threaten to make any such “victory” a prelude to new forms of civil war, and/or an enduring failure to cope with security, stability, recovery, and development. They also require a different approach to stability operations and civil-military affairs.

Iraq provides a critical test case, and is the focus of a new Burke Chair analysis entitled After ISIS: Creating Strategic Stability in Iraq . This analysis is now available on the CSIS website at https://csis-website-prod.s3.amazonaws.com/s3fs-public/publication/170711__Iraq_After_ISIS.pdf?2YaQgwPQq4GnjGoSIzhMoQ7eplxQ2vq6. It provides a detailed picture of the challenges Iraq must meet, drawing on material from a wide range of sources—such as World Bank, IMF, CIA, UN, Transparency International, Institute for the Study of War, and IISS—to address the deeper critical challenges that Iraq must address over time if it is to achieve any degree of lasting strategic stability.

In doing so, the analysis focuses on six key sets of challenges:

Dealing with these challenges is also a far more immediate need than is the case of other "failed state" conflicts. Iraq is the only one of America's "failed state" wars where the United States has a near-term prospect of winning some form of military victory and of being able to help implement some form of conflict resolution that can begin to deal with the other critical factors that have long made Iraq a "failed state." Defeating ISIS in Syria will not—by itself—solve its other failures and may well be the prelude to new forms of conflict. Libya remains a divided mess, and the wars against extremism in Somalia and Yemen are far from over.

Iraq also has unique opportunities. It does not face the same level of post-conflict challenges as Syria, Libya, Yemen, or Afghanistan. It has achieved substantial levels of development relative to other “failed states” in spite of nearly a half century of revolution, turmoil, and war, and has substantial petroleum income.

This does not mean, however, that the defeat of ISIS will bring stability, recovery, or successful national development. Iraq was still a “failed state” in virtually every respect before ISIS invaded and it is still largely a failed state. Ending ISIS's physical "caliphate" in Iraq will not end ISIS or the broader threat of terrorism and Islamist extremism. Finding a stable relationship between the central government and the Kurdish regional government presents a critical challenge, as does finding a stable relationship between Sunni and Shi'ite Arab and protecting minorities.

Unless Iraq's leaders can come together and govern more effectively, defeating ISIS may well be a prelude to continuing ethnic and sectarian crisis or civil war. While the war against ISIS has created some degree of cooperation, it is important to note that the ISIS invasion was enabled by massive misgovernment under former Prime Minister Nouri Maliki, and a steady rise in ethnic and sectarian violence—that had risen back to the 2008 levels of civil conflict by the time ISIS invaded Fallujah in January 2014. Significant tensions and risks of violence exist within the Kurdish, Sunni Arab, and Shi'ite factions. Iraq also is not able to choose its neighbors or its “friends.” Russia, Iran, Turkey, other Arab states, and the United States and its allies all have conflicting interests and compete for influence.

Moreover, many of the reasons why Iraq is a "failed state" are structural, and not just a matter of the impact of war and political differences. Iraq's politics and governance are corrupt and dysfunctional at the working level from the central government down to local government. Its justice and political systems are weak, sometimes virtually non-existent at the local level, and often corrupt and ineffective. Iraq has critical economic problems at every level, and it has long been under acute population pressure in spite of the impact of its wars.

This complex mix of pressures makes creating any form of lasting stabilization, recovery, and movement towards development a massive challenge. It also makes it grossly unrealistic to assume that stability can be accomplished simply by political dialogue, or that recovery and development can take place by implementing some form of nation-wide reforms that ignore regional, ethnic, and sectarian differences and the role of given factions and powerbrokers. Far too many recent U.S. and other outside efforts to bring stability to Iraq at the end of the major fighting with ISIS ignore these realities, and do not address the full range of challenges that will shape Iraq's "post-ISIS" future for at least the next half decade.

This analysis focuses on the depth and structural nature of these broader structural failures and challenges. It does not address the immediate problems in dealing with the political, sectarian, and ethnic divisions in Iraq; but it does focus on their deeper structural nature and how they interact with population pressure and the impact of key factors like poverty, unemployment, and the gross—state-centric—distortion of the nation's economy. It also focuses on the aspects of stability and Iraq's status as a failed state that receive less attention than the risk of factional political conflict, but are equally important. These include failures in governance, economics, and demographics.

The analysis concludes by noting that Iraq is still a country with vast opportunities, but the study outlines a host of critical challenges. Given Iraq’s recent history, such challenges are virtually inevitable, and it should be clear to any reader familiar with today’s Iraq that the ones outlined in this study only include the more serious problems and describe them using uncertain data and in broad terms.

Accordingly, one key step in meeting such challenges is to look beyond the immediate priority of finding some practical solution to Iraq's ethnic and sectarian divisions and to assess these challenges more accurately, along with possible solutions, and to establish clearer priorities and options for dealing with them. It is also clear that a proper diagnostic effort will require years of in-country efforts to analyze and quantify Iraq’s needs and create some kind of ongoing planning and management effort to deal with the changing interactions created by Iraq’s evolving problems and needs.

Such an effort can only begin, however, if Iraq's leaders look beyond their present sectarian and ethnic tensions, face the full nature of Iraq's problems, and find some way to work together. The first step is to take advantage of the defeat of ISIS's "caliphate," and find a common path to short term stability and the ability to work towards common goals. No outside effort, aid, or advice can deal with scale of the structural challenges outlined in this study unless Iraq's leaders take responsibility for their country and the broader consequences of their actions. The past and current mistakes of outside powers and factions may be all too real, but they are irrelevant. No one can successfully help an Iraq that does not help itself.

Iraq cannot succeed on its own. It will need outside technical and financial aid for years until its progress reaches a self-sustaining level. Outside states and institutions also have a potential common interest in helping Iraq, and some moral responsibility to do so, but only if Iraq's leaders can come together and show that such help will serve a clear purpose . It is critical, that Iraq’s leaders understand that they—and they alone—must assume responsibility for creating the necessary politics, leadership, and institutions that can ensure Iraq’s success. Iraq’s past tendency to try to export blame and responsibility will only end in another exercise in self-destructive behavior, regardless of the faults of outside states and institutions.

As events during 2003-2011 showed all too clearly, no outside power can help an Iraq that is not prepared and organized to actively meet the full range of challenges outlined in this report. The same lessons about a failure to assume responsibility have emerged again and again since World War II. The end result of exporting responsibility, and depending on outside aid efforts, may allow Iraq’s leaders to focus on their own or factional interests and dodge full responsibility for their actions. It will, however, end in failure, and create growing resentment and tension that may well divide the nation or lead to new forms of civil war.

The world must hold Iraq fully responsible for finding its own path in making the transition from war to security, stability, recovery, and development. This is particularly true because there is little sign of any outside willingness to try to rescue Iraq from itself. The United States, in particular, has already recognized that it cannot assume the burden of dealing with Iraq's complex human, governance, and economic transitions once ISIS is largely defeated in the field. 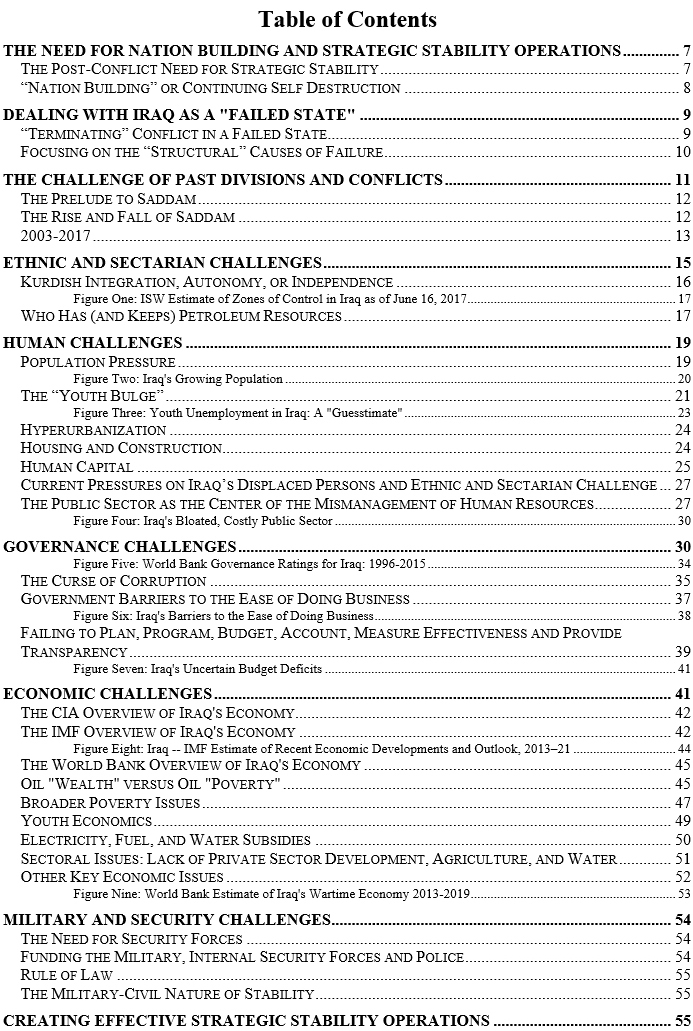 Republicans ramp up criticism of Biden over Afghanistan
The Washington Examiner | Naomi Lin
August 16, 2022
View all content by this expert