All Quiet along the GERD: Will This Year’s Rains Avert a Worst-Case Scenario?

Addis Ababa has heavy rainfall to thank for sidestepping a direct confrontation with Sudan and Egypt over the Grand Ethiopian Renaissance Dam (GERD). According to satellite imagery and hydrology data acquired by CSIS and ISciences, near-record runoff in the Blue Nile catchment area enabled Ethiopia to fill an abundant reservoir behind the $4.6 billion hydroelectric dam while releasing enough water through the gates to placate Sudan and Egypt’s considerable water needs. Above-normal runoff in the White Nile catchment area also helped reduce the impact from the GERD’s filling on downstream water supply. Ethiopia views the GERD as an essential lifeline for its economy, while Egypt and Sudan see it as an existential threat to their water supply. It remains an open question whether the current rainy season will be enough to keep tensions low between the three countries, and how they will navigate drought conditions in future water years.

When Ethiopia announced in July 2020 that it would begin filling the GERD (despite the lack of a binding agreement with Egypt and Sudan on filling and operation of the dam), the prospect of a confrontation between Ethiopia and its neighbors seemed increasingly possible. The threat of diminishing the Nile’s downstream flow to Egypt and Sudan prompted both governments to appeal to the United Nations and regional bodies to intervene before it was too late.

Ethiopia’s fill, however, has not led to a doomsday scenario—at least not yet. In a satellite image taken on July 1, 2020, the Nile River looks like a thin, snaking line behind the dam; just 43 days later, on August 13, 2020, the same stretch of river had grown more than 15 times into a bloated reservoir—from 8 km2 to 114 km2.1 Ethiopia was able to maintain the reservoir’s area from August 2020 through the end of June 2021, despite a drop-off in runoff beginning in September 2020. 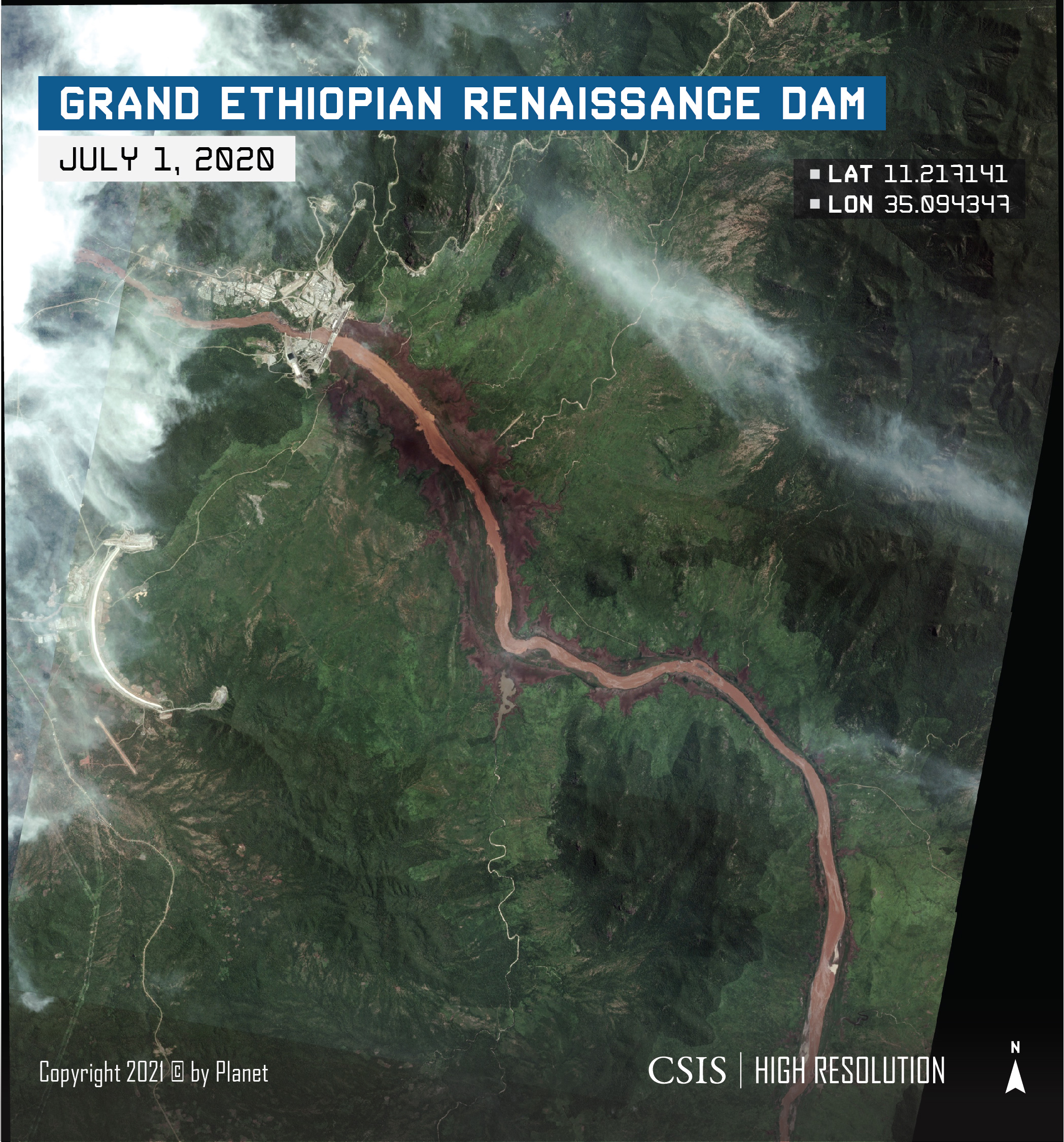 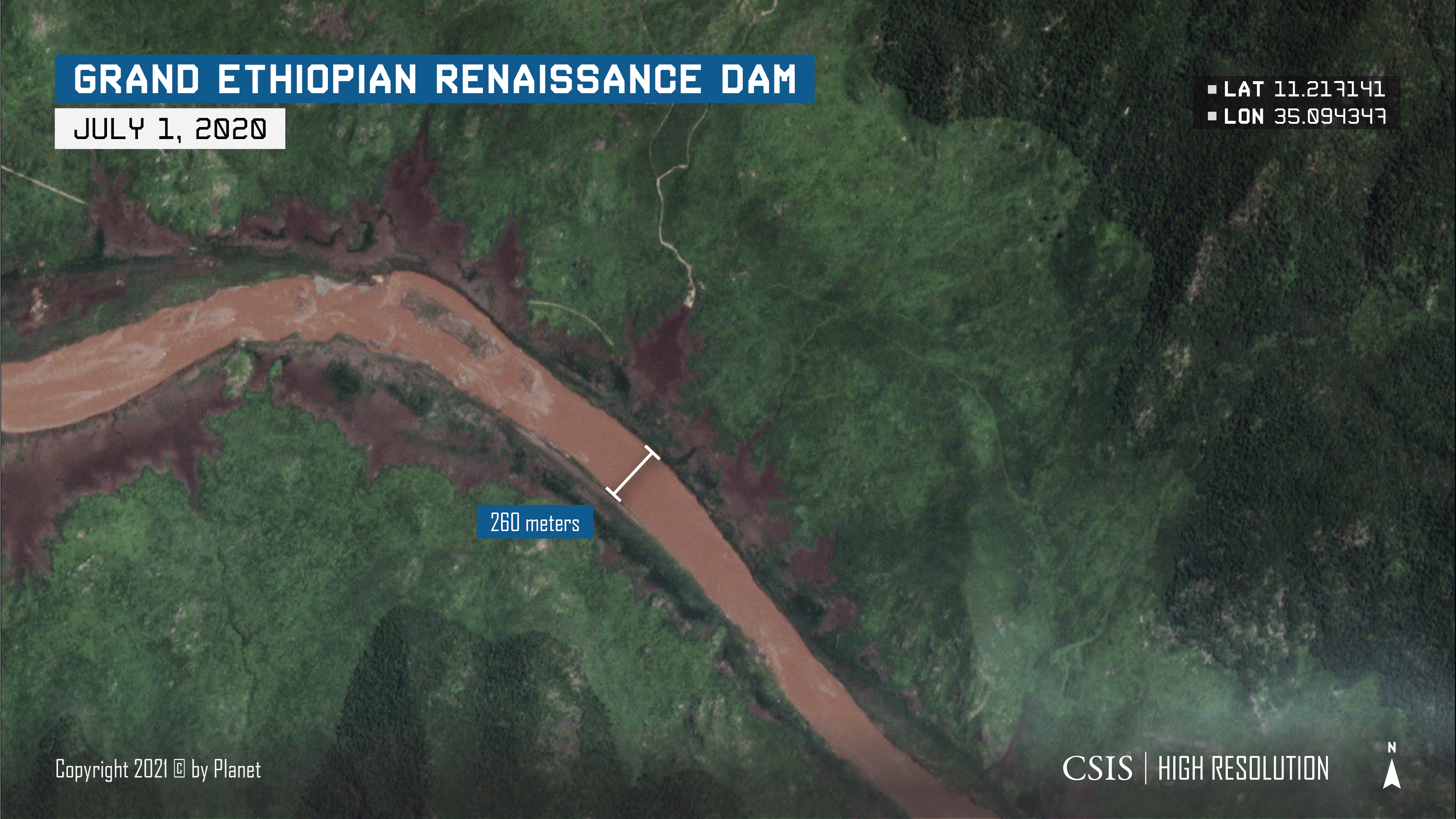 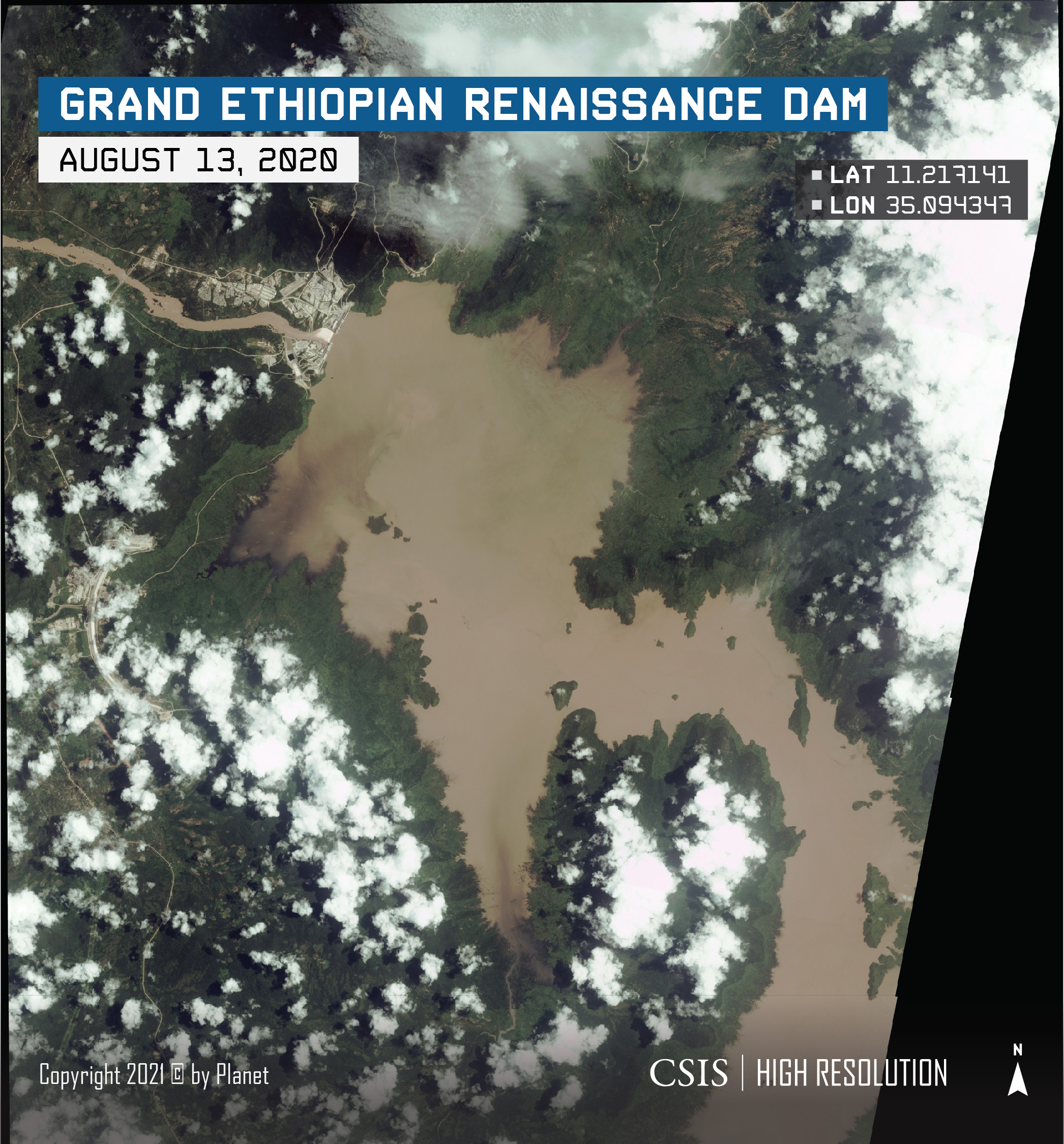 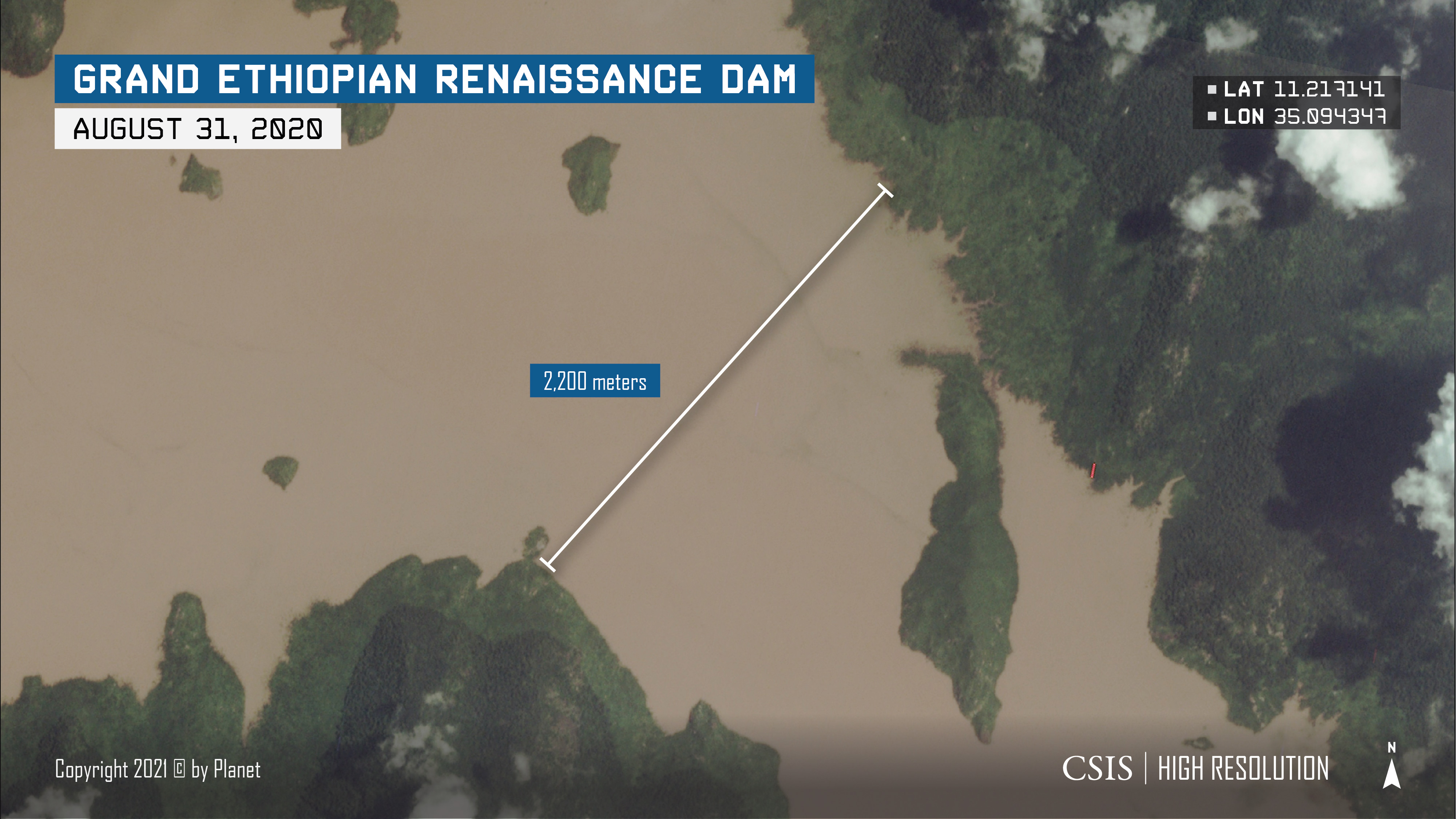 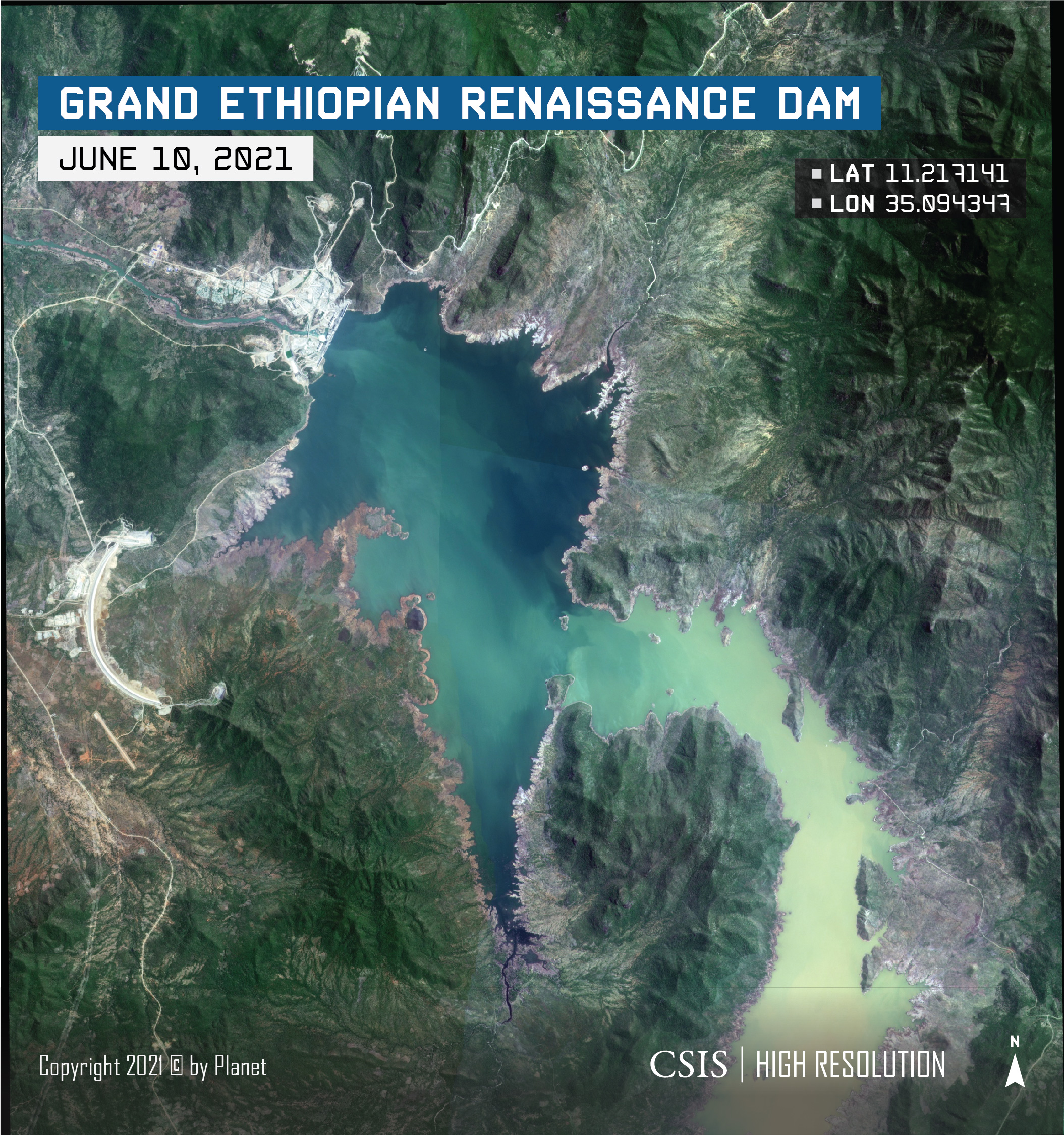 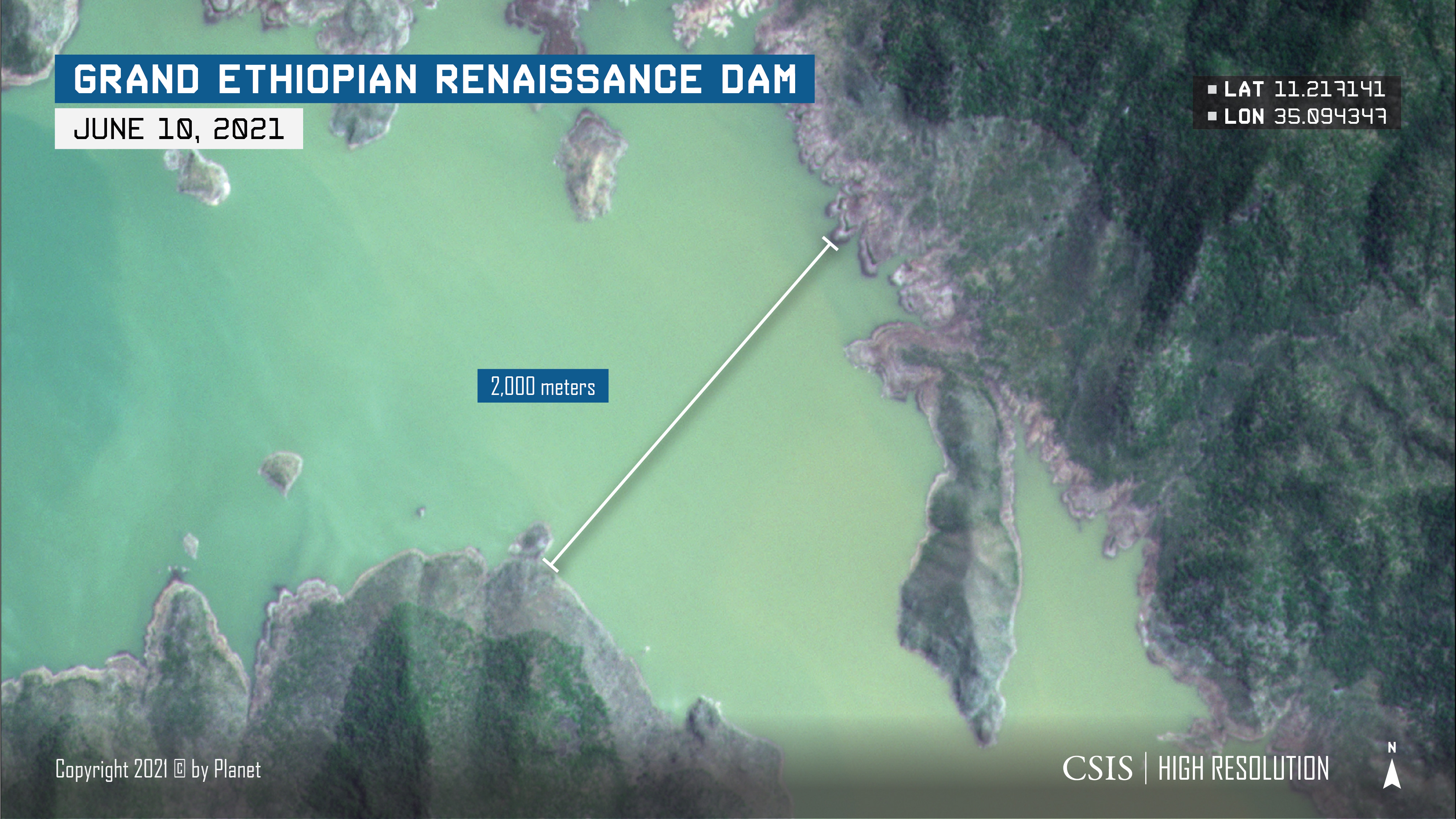 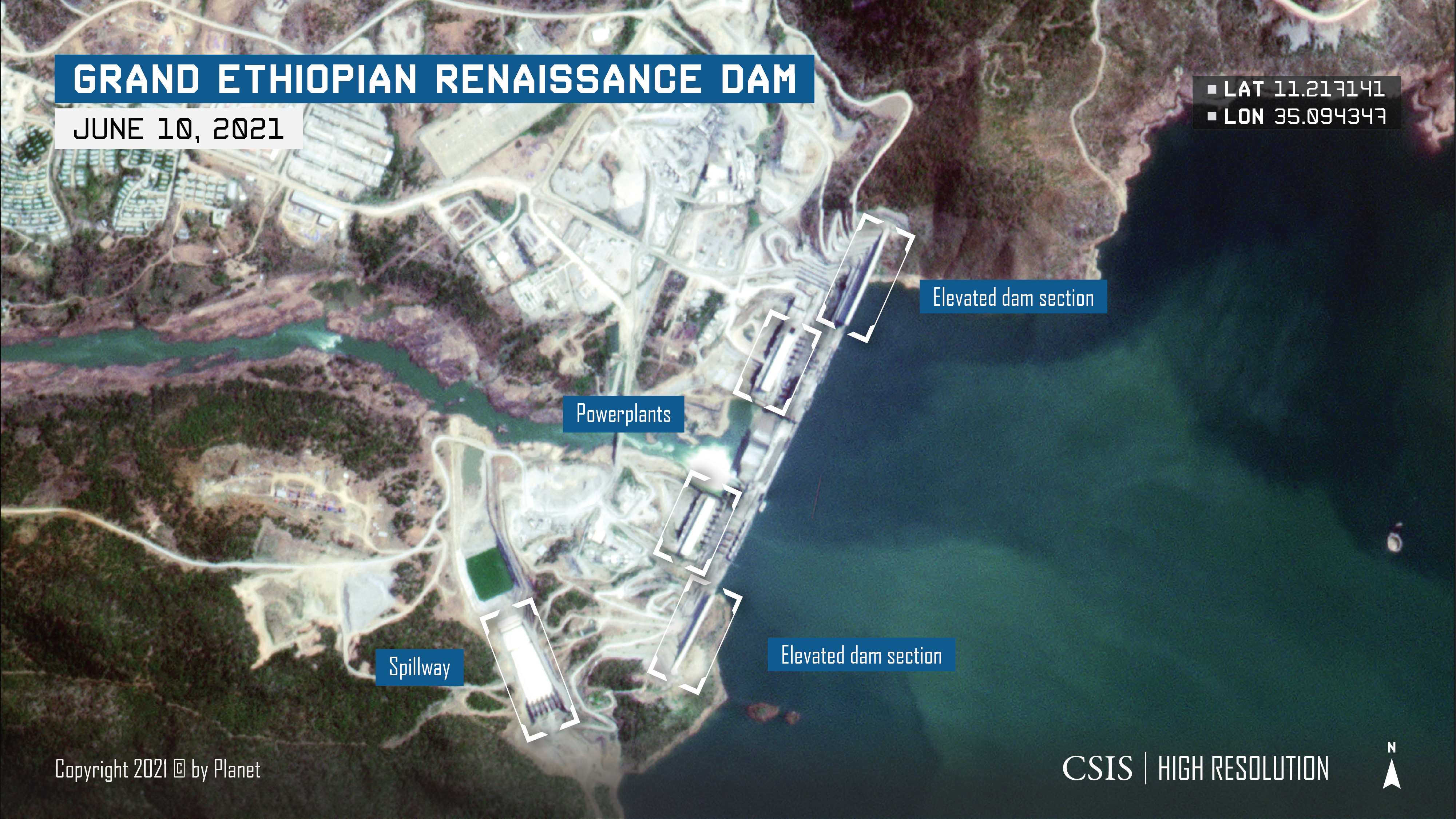 The record-breaking level of rainfall between July and September 2020—Ethiopia’s rainy season—averted a major crisis, enabling the Ethiopian government to reach its goal of filling the reservoir and at the same time release more water through the GERD’s gates than it had likely expected to. This helped Ethiopia offset some of the would-be downstream loss to Sudan and Egypt. In fact, because of the heavy rainfall, Ethiopian prime minister Abiy Ahmed alleged in an April tweet that the filling of the GERD had “undoubtedly prevented severe flooding in neighboring Sudan.” While Sudanese officials have disputed this claim, the heavy rainfall seems to have saved Ethiopia from the scenario that many analysts expected: that significantly reduced downstream flows into Sudan and Egypt would result in heated clashes between those countries and Ethiopia. 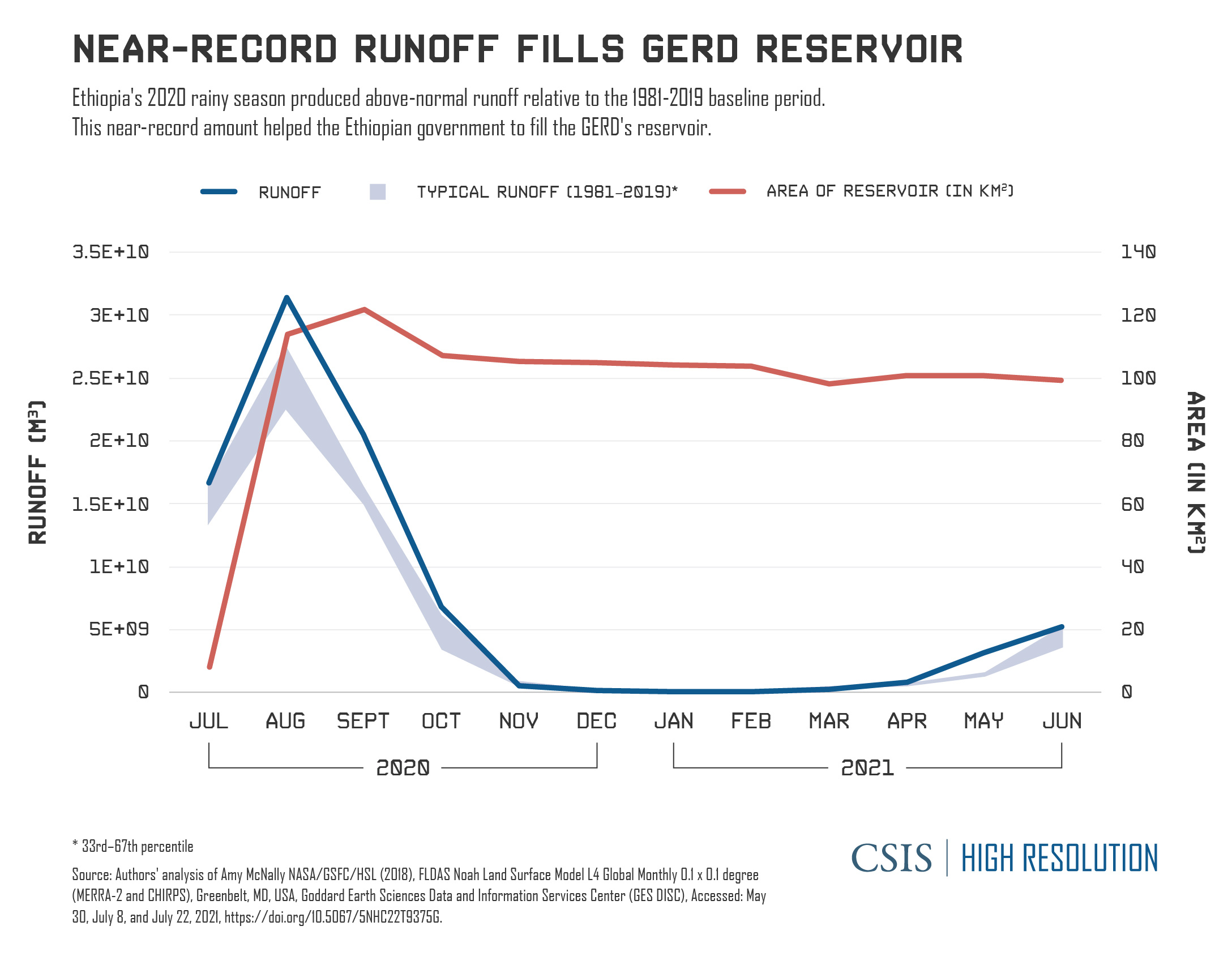 The Crisis This Time

It remains to be seen if Ethiopia will be lucky again. It is the rainy season now, and it is unknown whether or not the country will receive enough rainfall to both fill the reservoir and release enough water downstream to mollify Sudan and Egypt.

If this year’s rainfall does not mirror 2020’s, the region is at risk of heightened tension around water levels. Just last month, Sudan renewed its warning to Ethiopia, demanding fresh negotiations with a larger African Union (AU) presence—something that Ethiopia has repeatedly refused. With Ethiopia embroiled in a deadly civil war and recurrent border clashes between Ethiopia and Sudan over the disputed al-Fashaga region, it is dangerous, even irresponsible, to bank on rain clouds to forestall another conflict in the Horn of Africa.

Going forward, the AU should continue to press the Ethiopian government to resume negotiations with its neighbors—something which both Sudan and Egypt are actively seeking. Most of the technical disputes have been resolved, but drought mitigation protocols and a dispute resolution mechanism are still on the table, and will become more urgent in future water years.

This commentary was produced in partnership with ISciences, a consulting company that uses evidence-based analysis to understand vulnerabilities and achieve sustainability in a rapidly changing world.

Special thanks toFina Short, an intern with the Center for Strategic and International Studies (CSIS) iDeas Lab, for providing research support to this commentary. Imagery markups by CSIS iDeas Lab designer William Taylor.

Judd Devermont is director of the Africa Program at CSIS in Washington, D.C. Marielle Harris is research associate of the CSIS Africa Program. Joseph S. Bermudez Jr. is a senior fellow for imagery analysis (non-resident) with the CSIS iDeas Lab and Korea Chair. Matthew P. Funaiole is a senior fellow for data analysis with the iDeas Lab and senior fellow with the China Power Project at CSIS. Jennifer Jun is a program coordinator and research assistant with the iDeas Lab and Korea Chair at CSIS. Tom Parris is president of ISciences. Dan Baston is a scientific software engineer at ISciences.

1 For this commentary, the authors analyzed satellite imagery of the GERD and its reservoir from July 2020 to June 2021.