America's Failed State Wars in Afghanistan, Iraq, Syria, and Yemen: Still Less Than Half a Strategy

The U.S. needs to make critical and time-sensitive decisions regarding the future of its wars in Afghanistan, Iraq, Syria, and Yemen – as well as in its broader struggle with terrorism and extremism, and its dealings with Iran. The U.S. is now trapped in four “failed state” wars where there are no clear prospects for lasting “victory” unless the current threats can be defeated at the military level and the host country can both develop forms of politics and governance that can create an enduring peace and also make enough progress in recovery and development to sustain peaceful stability.

At this point, it is unclear that tactical victories against a current enemy can create a temporary peace in any given war. It is all too clear that any form of real and lasting peace requires “victory” at the civil level as well as the military one, and that such a victory has three critical components: political unity, effective governance, and economic progress. Economic progress must mean progress for all of the elements of a country’s population in order to provide a lasting incentive for unity and cooperation among the major factions.

The U.S. cannot go on lurching from withdrawals to new commitments and back or hoping that some limited additional military commitment will somehow sustain a war of attrition that mysteriously has a happy ending. Political, military, and economic forces are at work in all four of America's current wars where the U.S. needs far clearer strategies. And, if the United States is to have any lasting success, it must be a strategy that has all three elements of a successful grand strategy – warfighting, peacemaking, and lasting stability

More broadly, the U.S. needs to learn how to apply strategic triage, and when and if it should commit forces and resources to “failed states.” The answer in many cases may be to focus on containment and the support of states where U.S. support can clearly make a critical difference. In those cases, the U.S. must learn to address both the military and civil dimensions of counterterrorism and counterinsurgency. It must not only act in ways that defeat a given enemy but deal with the civil failures that empower that enemy in the first place.

The Burke Chair at CSIS has completed a study that addresses the key civil challenges in each war, as well as the need for a U.S. approach to counterterrorism and counterinsurgency that address the civil as well as the military dimensions of all such conflicts. This study is entitled America's Failed State Wars in Afghanistan, Iraq, Syria, and Yemen: Still less than Half a Strategy, and it is available on the CSIS web site at https://csis-website-prod.s3.amazonaws.com/s3fs-public/publication/181015_Failed_Wars.pdf?ZrioMAScr0LNi_pWu0E.WJQylgDRQpcg.

The Table of Contents is shown below: 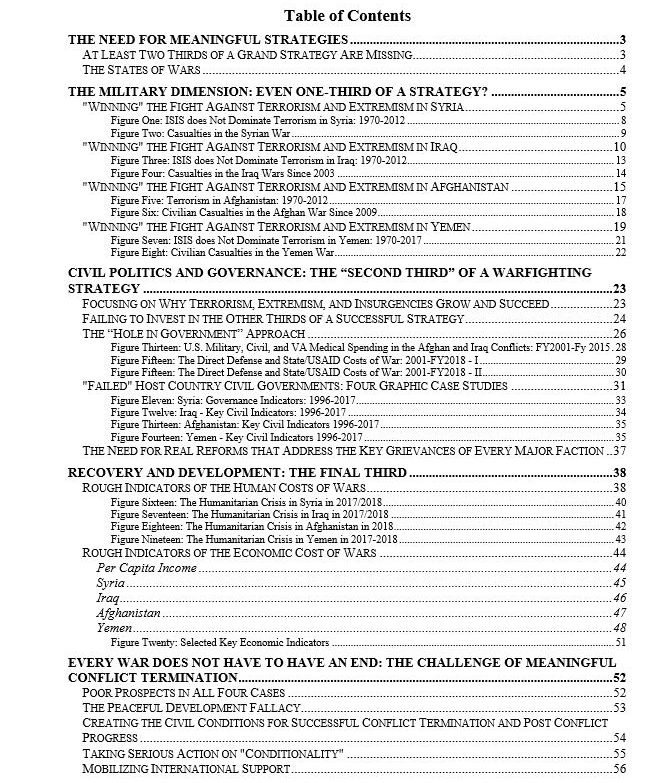 Other related Burke Chair studies include: