Q1: What was the outcome of Taiwan’s local elections held on November 29?

A1: Nine categories of elected office, ranging from mayors and heads of large counties to chiefs of small villages—a total of 11,130 seats—were up for grabs in what was called the “nine-in-one” election. The Democratic Progressive Party (DPP) trounced the ruling Nationalist (KMT) Party in most of the key races, winning 13 of the 22 cities and counties. The number of cities and counties under KMT control dropped from 15 to 6.  The remaining 3 were won by independent candidates. The DPP won 47.56 percent of the popular vote, while the KMT won 40.7 percent.
Voter turnout nationwide was 67.59 per cent. Two big losses for the KMT were the mayoralties in Taichung and Taipei. Incumbent Jason Hu of the KMT, who served as Taichung mayor for 13 years, was defeated handily by DPP candidate Lin Chia-lung. In Taipei, KMT candidate Sean Lien, son of former Vice President Lien Chan, lost to Ko Wen-je, a former surgeon who ran as an independent but was backed by the DPP. After the election, the DPP will govern local affairs not only in its traditional stronghold in the southern part of the island, but also in parts of northern and central Taiwan. 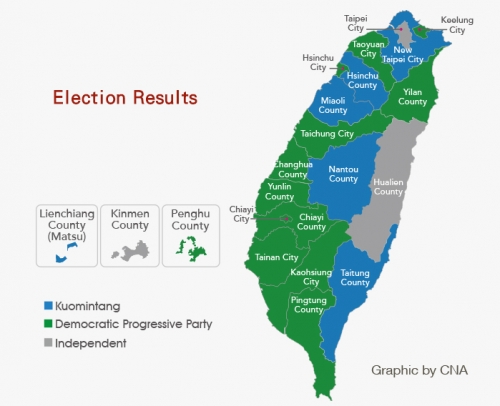 Q2: What were the key issues in this year's elections?

A2: Although Western media often emphasize the ‘China factor’ when covering Taiwan’s local elections, these races focused primarily on domestic issues. The Taiwan public is concerned with skyrocketing property prices, falling incomes, a growing gap between rich and poor, and food safety. Many young people are worried about job prospects. Many residents on the island have been dissatisfied with KMT governance and this was reflected in the voting island-wide.

Cross-Strait issues were likely less important, but may have influenced some voters. Concern has been growing about Taiwan’s over-reliance on Mainland China economically and Beijing’s increasing influence on the island. A proposed trade pact with the Mainland sparked mass student-led protests and a three-week occupation of Taiwan’s parliament earlier this year. The poor showing for the ruling party was the latest sign of public skepticism toward President Ma Ying-jeou’s economic agenda since he came to power in 2008, the focus of which has been opening direct links and liberalizing trade with China.

Individual candidates clearly mattered in several races. For example, Sean Lien was widely viewed as a pampered child from a wealthy and powerful political clan.  His opponent, Ko, had no government experience, but his emphasis on bipartisanship—going beyond blue (KMT) and green (DPP)—resonated with voters.

Q3: What are the implications for Taiwan’s presidential elections in 2016?

A3: Presidential and legislative elections will take place in January 2016. Despite the fact that local elections reveal little about island-wide trends, it is likely that the key actors—the KMT, the DPP, and Mainland China—will interpret the election results as creating momentum for a DPP victory in the 2016 presidential election. Taiwan’s relations with Mainland China will likely be a more prominent issue in 2016. In the past eight years under KMT rule, President Ma has based his policy toward the Mainland on the “1992 Consensus,” which is an understanding between Beijing and Taipei that there is “one China,” but each side maintains its own definition. President Ma defines “one China” as the Republic of China.  His administration has also pursued a “Three No’s” policy of no unification, no independence, and no use of force.

The DPP has traditionally favored independence for the island. Tsai Ing-wen, the current DPP chairperson and likely 2016 DPP presidential candidate, lost to Ma Ying-jeou by 6 percentage points in 2012. One widely believed reason for her defeat was Taiwan voters’ uneasiness about whether cross-strait relations would remain stable if she were elected, since Tsai was ambiguous about her policy toward Mainland. Today, Tsai still rejects the “1992 Consensus” and is unclear about her China policy, though she favors cross-strait dialogue and cooperation. Her basic position is that Taiwan’s future should be decided by its 23 million people and independence should remain an option. In an interview last July, Tsai said that Beijing would be compelled to adjust its strategy toward the DPP if the party performed well in the local elections.

The most likely and strongest KMT presidential candidate is Eric Chu, who was just re-elected for a second term as mayor of New Taipei City by a razor thin margin of less than 25,000 votes (1.28 percentage points). Chu has not articulated a policy toward Mainland China, but it is likely that he would not stray too far from the current policies pursued by Ma Ying-jeou.

Q4: What are the implications for U.S.-Taiwan relations and cross-strait relations?

A4: U.S.-Taiwan relations will not be significantly affected by this election. The Obama administration will probably strengthen communication with the DPP. When Chair Tsai visits Washington in February, U.S. officials will probably encourage her to find ways to narrow her party's differences with the Mainland. The United States has an interest in the preservation of stable cross-strait relations and believes it is best if problem solving approaches are adopted by both sides of the strait and communication channels remain open. Prior to the 2012 presidential election, a senior Obama administration official told the Financial Times after meeting with Tsai that there were “doubts about whether she is both willing and able to continue stability in cross-strait relations.”

Beijing is likely quite worried about the DPP's significant victory and the setback for the KMT.  Mainland China fears the return of the DPP to the presidency. When Chen Shui-bian, the first and only DPP president, was in power from 2000-2008 he pursued provocative, pro-independence policies that agitated Beijing and increased tensions. Xi Jinping supports the policy of “peaceful development’ conditioned on opposing Taiwan independence and upholding the “1992 Consensus” designed by his predecessor Hu Jintao. Xi has also reminded Taiwan’s citizens that the Mainland’s goal is to reunify with the island under a variation of the “one country, two systems” formula that was applied to Hong Kong. In the near-term, Beijing is unlikely to alter its Taiwan policy. Progress in cross-strait relations is beginning to stall, but a reversal is unlikely during Ma’s tenure. As the presidential elections near, if the DPP does not accept some formulation of “one China,” Beijing is likely to criticize the party and Tsai harshly, and may take various measures to attempt to prevent a DPP victory in 2016.