The Army’s Drawdown Announcement -- Something Old, Something New

The Army’s recently announced reduction to 450,000 active duty soldiers has been long known, but the specifics about units and locations are new. The Army’s tone suggests that it wants the reduction to be reconsidered, a position General Ray Odierno, the current chief of staff, has not been shy about making. The reduction does decrement capabilities and increase risk. Some commentators argue that these risks are acceptable in an environment of reduced resources and strategic realignments. Others argue that the real world will not allow the Army to get that small. Over the long term, sequestration and the high cost of military personnel may force further reductions regardless of strategic needs.

The reductions are not a surprise . Cuts to this level were foreshadowed in January 2012 as DOD coped with the budget reductions required by the 2011 Budget Control Act, were made known in August 2013 after DOD’s Strategic Choices and Management Review, and were announced in the Quadrennial Defense Review (QDR) released in March 2014. The surprise expressed by some politicians and journalists is therefore hard to understand.

The specifics are new. The announcement lays out which specific units the Army will reduce or deactivate. Although the reduction affects 30 installations, six are hit hardest - Fort Benning (GA), Fort Hood (TX); Joint Base Elmendorf-Richardson (AK); Joint Base Lewis-McChord (WA); Schofield Barracks (HI); and Fort Bliss (TX). The cuts don’t seem to be so deep that they make any installation particularly vulnerable to future closure.

What is new is that, instead of deactivating whole brigades, the Army will reduce them to smaller “task forces,” thus mitigating the effects at individual installations - and allowing easier reversal in the future should such a decision be made.

The announcement does make the reductions real politically. As expected, politicians have decried the cuts for both strategic and parochial reasons. The Army, to its credit, appears to have made the decisions based on local training opportunities, deployability, and active/reserve balance.

Odierno wants a reconsideration. He has long been clear that he regards the cuts as risky and prefers remaining at 490,000. Although General Odierno is defending his institution’s interest, he is also right that there are real strategic effects to the cuts.

The demanding security environment may not reverse the cuts but may put a floor on the Army’s size, at least in the short term. When the downturn in the defense budget began, some commentators recommended an even smaller Army -- 420,000 or even 380,000 -- arguing that large land wars are unlikely. That size looks too low today. As a point of reference, the Army was at 482,000 on 9/11 when the Afghanistan conflict began and the Army had to grow substantially to meet U.S. commitments in that campaign and Iraq.

Long term trends may squeeze the Army anyway . The QDR identified sequestration as the greatest threat to DOD, giving it more attention than China or Russia. Sequestration would indeed force additional budget cuts on DOD, and the Army says it would go down to 420,000 soldiers to pay its share. What will happen to the budget is anyone’s guess at this point, but the conventional wisdom is that the final level will be somewhere between the president’s proposal ($534 billion) and sequestration ($499 billion).

But there is another dynamic at work. As military service members have become increasingly expensive over time, the services have coped in the same way that businesses have -- shrink the expensive full-time workforce, rely on part-timers (Guard and reservists), substitute capital for labor, and outsource non-core activities (battlefield contractors). Regardless of what happens in the short term, therefore, this dynamic will likely continue in the long term.


© 2015 by the Center for Strategic and International Studies. All rights reserved. 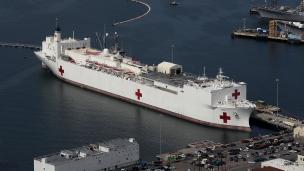 Shipyards Not At Risk, Despite DoD Warning It Needs $$ To Save Them
Breaking Defense | Paul McLeary
August 12, 2020
In the News

The Marine Corps' Gig Plans to Get Rid of its Tanks Could End Up Being a Hassle for the Army
Business Insider | Gina Harkins
August 8, 2020
In the News

Death To OCO: What Would Dem Sweep Mean For War Funding?
Breaking Defense | Mark F. Cancian
July 29, 2020
In the News

Army Reserve to be Commanded by Woman for the First Time
The Hill | Alexandra Kelley
July 22, 2020
In the News