Disaster sometimes moves slowly. Naturally, our attention is drawn to fast-moving, visually captivating threats: a raging wildfire, a careening car, a missile test. Terrorist attacks are often designed to tap into these cognitive biases. But some threats grow gradually and out of sight. When they finally materialize and appear urgent, it’s already too late.

Climate change is the creeping catastrophe of our time. As global temperatures rise, the effects are subtle but intensifying over time. Last month was the second hottest March on record, with temperature across global land and ocean surfaces 1.89 degrees Fahrenheit above last century’s average. Due to warming waters and melting ice, global sea levels have been rising roughly 3.2 millimeters every year.

A few degrees here, a few millimeters there, what difference does it make?

Rising seas could wreak havoc across developing Asia, as the map below illustrates. For every meter the sea level rises, the U.S. Agency for International Development projects that 24 million people could be displaced in Bangladesh, India, Indonesia, Cambodia, Vietnam, and the Philippines. Beyond flooding, rising seas lead to more intense and frequent storms, as well as ocean acidification that threatens fish and other marine populations. 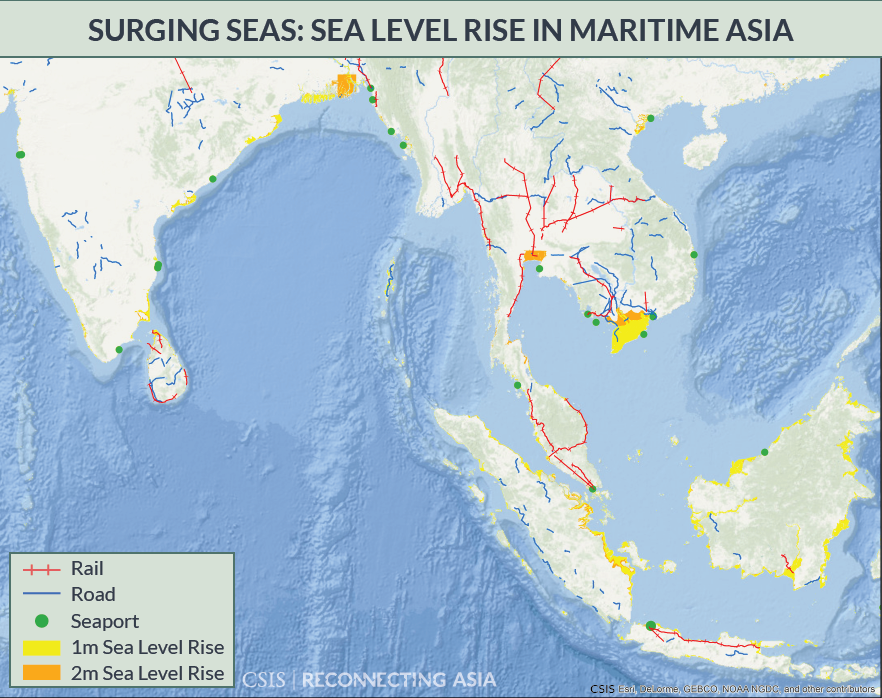 Risk is not distributed evenly. Asia is the world’s most vulnerable region to a one-meter sea level rise, given its exposure in terms of population, economic activity, and landmass. Within Asia, risk is further concentrated in the areas highlighted above. Countries experience sea level rise and other climate impacts differently, making collective action more difficult.

But climate resiliency also comes with a hefty price tag. Evaluating its climate adaptation options, one port determined that raising its terminal decks would cost between one and five times its annual revenue. Indonesia’s capital, Jakarta, is considering reclaiming land and building a 32-kilometer seawall. Costing as much as $40 billion , these plans would also protect its newly constructed port, shown in the map below. 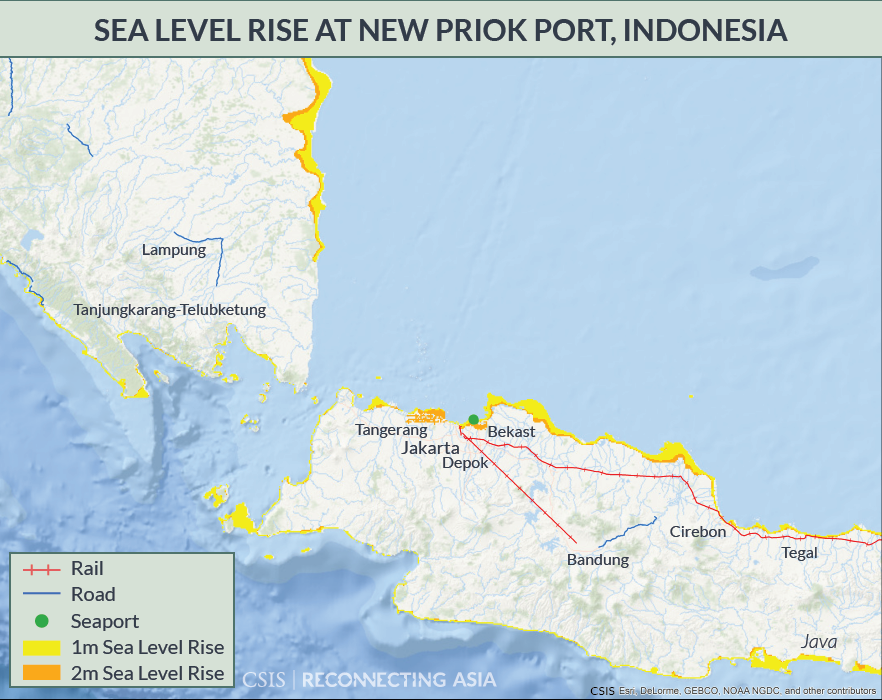 To address climate change, developing Asia will need to invest an additional $3.4 trillion in its infrastructure between 2016 and 2030, according to the Asian Development Bank. That is in addition to the $22.6 trillion the region needs for its basic infrastructure needs. Meeting those goals will require countries to roughly double their current levels of spending.

Of course, the cost of inaction would be even higher. Ports and coastal communities that do not adapt will see economic activity diverted to safer harbors. A failure to adapt could also have global repercussions. Rising seas and extreme weather events could displace millions of people, creating large refugee flows and disrupting trade. At-risk countries should take a longer view, and the international community should support their efforts.

It is worth considering even more dire scenarios. A recent study suggests that Southeast Asia’s challenge could be even greater than expected. Researchers found evidence of large fluctuations in the region’s sea levels 6,000 years ago, before human activities were a major driver of climate change. In other words, sea levels could rise much higher than climate projections indicate.

Addressing climate change’s root causes will require overcoming cognitive biases. Unlike many other threats, climate change is abstract, distant, and invisible, as George Marshall explains in his book Don’t Even Think About It: Why Our Brains are Wired to Ignore Climate Change. For those reasons, Nobel Prize–winning psychologist Daniel Kahneman flatly told Marshall, “I see no path to success on climate change.”

While no panacea, mapping can help. Climate data is increasingly sophisticated and can be used to project how countries, cities, and communities will appear years from now. The National Oceanic and Atmospheric Administration has a sea level simulator that models impacts on the United States. As technology improves, simulations like these become even more “real”—not only adding analytical value, but also helping to raise awareness.

Why Victoria Took a Wrong Turn on China's Belt and Road
Australian Financial Review | Jonathan Hillman
November 20, 2020
In the News

The Project of Chinese Hegemony
The Open Mind | Alexander Heffner
November 9, 2020
In the News

What Will Xi’s China Do Next?
Financial Times | James Kynge
October 20, 2020
In the News