The Attack Against U.S. Ambassador to Korea Mark Lippert

The attack against U.S. ambassador and friend Mark Lippert was a senseless act of violence against a public servant who genuinely cares about Korea and the relationship between the American and Korean people.

Korea Chair Snapshot is a new product by the CSIS Korea Chair providing key takeaways from breaking events of the day. Korea Chair Snapshot is published by the Office of the Korea Chair (http://www.csis.org/ program/korea-chair) at the Center for Strategic and International Studies (CSIS), a private, tax-exempt institution focusing on international public policy issues. Its research is nonpartisan and nonproprietary. CSIS does not take specific policy positions. Accordingly, all views, positions, and conclusions expressed in this publication should be understood to be solely those of the author(s).

A conversation on breaking events in Korea
May 5, 2020
Newsletter 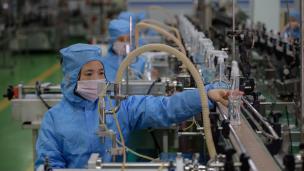 Splendid Isolation: North Korea and COVID-19
By Victor Cha
April 30, 2020
In the News

What the United States can learn from South Korea's virus response
MSNBC | Andrea Mitchell Reports
April 15, 2020
View all content by this expert