The Spanish conquistadores spent an inordinate amount of time searching for the famed city of El Dorado. They might as well have been searching for Venezuela’s Orinoco Mining Arc. Since 2016, when the Nicolás Maduro regime declared the immense area open for mining, Venezuela has become a principal source of illicit gold mining in Latin America. The Mining Arc abuts the ecologically important and famous Canaima National Park, spreading the scourge of illicit mining into the UNESCO World Heritage Site and accelerating Venezuela’s environmental destruction.

Worse, neither the regime’s environmental degradation nor the resources generated from it have remained contained within Venezuela. The Maduro regime has been spreading the wealth derived from illicit mining to other governments in the region. Specifically, Nicaragua’s dictatorship, headed by President Daniel Ortega and First Lady and Vice President Rosario Murillo, has been a prime recipient of Venezuela’s largesse and illicit financial linkages.

The gold-laundering scheme no doubt represents valuable support for Ortega. Both the Maduro regime in Venezuela and the Ortega regime in Nicaragua find themselves under U.S. and international sanctions programs for corruption, human rights abuses, and rigged elections. In Ortega’s case, the considerable international isolation felt by his government after Nicaragua’s sham 2021 elections, which led to several rounds of sanctions and calls to suspend the country’s participation in the Organization of American States and the Dominican Republic–Central America Free Trade Agreement, makes the opportunity offered by ideological comrade Maduro an important lifeline. Given the difficulty of tracing gold and bringing greater transparency to gold supply chains, it is an ideal mineral for flouting the U.S. and international sanctions architecture. And gold prices continue to soar, incentivizing further illicit mining, which nets the countries involved more money than their involvement in drug trafficking.

Further, the Maduro regime’s gold-running scheme via Nicaragua continues a long-standing trend of illicit finance from Venezuela to Nicaragua first observed in its Petrocaribe program. Over more than a decade, Petrocaribe provided a platform to launder an estimated $4 to $6 billion from Venezuela’s state-owned oil company, Petróleos de Venezuela, S.A. (PDVSA), to Nicaragua. In theory, this money was earmarked for development projects, but hardly any came to fruition. Many of the projects languish as open fields, and much of the money found its way into Sandinista political coffers instead. It would appear as though the Maduro regime’s most recent financial scheme involving Nicaragua is just the latest in its long-running efforts to prop up the Ortega regime through whatever means possible.

Venezuela has developed a highly sophisticated scheme for sanctions evasion through the use of illicitly mined gold. Illegal gold mines in Venezuela are regulated by sundry criminal groups, such as the dissident Revolutionary Armed Forces of Columbia (FARC-D), the National Liberation Army (ELN), and the Venezuelan armed forces. Local miners often sell the gold to Minerven, Venezuela’s state-owned gold company, which then melts it into bars. Once the gold is refined, the Venezuelan military ferries the bars to military airbases outside the capital, Caracas. The gold is then transported by land to the Central Bank of Venezuela and into the Maduro regime’s possession. The order of operations is repeated with Venezuela’s exchanges with its allies, like Russia, who fly into the country and exchange public goods for gold. All the while, gold transfers hands and lubricates the crony networks Maduro relies on to remain ensconced in power.

For Ortega, the scheme is even easier. He does not have to step foot in Venezuela, as the Maduro regime flies gold bars directly to Managua on private flights. In fact, about 65 percent of the gold exports are shipped by air. In April 2021, Conviasa, the largest commercial airline in Venezuela, established 30 new international routes that connected the Maduro regime to many of its allies in the gold trade, such as the United Arab Emirates, Iran, and Turkey. In a more recent route expansion, Conviasa conveniently returned Nicaragua to the manifest in November 2021.

As the gold arrives in Managua, ENIMINAS processes it and labels it as Nicaraguan gold. Nicaragua’s state-led mining company functions as a bridge between the two dictators, as the gold bars are exported out of Nicaragua and sold on international markets. Despite Nicaraguan officials’ best efforts to keep the scheme hushed, discrepancies in export reporting exposed the lucrative plan, so much so that gold surpassed beef as Nicaragua’s most important export, with exports forecasted to top $1 billion in 2022.

Due to immense sanctions and the diminished funds available to Maduro, the Ortega regime provides Venezuelan dictator with important succor. As Nicaragua gets further involved with Maduro, Ortega faces the reality of increased sanctions. Additionally, the environmental degradation and massive human rights abuses entailed by illegal mining have received more attention from the international community. The environmental toll of authoritarian survival is now well understood.

The gold scheme advanced between the Maduro regime and the Ortega regime is but the latest example of increasingly coordinated action and cooperation between global autocrats and dictators—in the strategies they use to defeat international pressure, flout sanctions, and even repress their people. Maduro and Ortega are both cogs in the wheels of a broader transnational criminal enterprise, and they share many of their best practices (and resources) in authoritarian survival with one another.

The emergence of a “dictator’s international” has led some political scientists to theorize that regime types are exportable, transferrable, or imitable. Some have gone further with the concepts of “authoritarian export” and “authoritarian learning.” In the literature, the concepts remain underdeveloped, but they are defined as processes in which “authoritarian regimes adopt survival strategies based upon the prior successes and failures of other governments.” This occurs most obviously when Russia or China exports security equipment or high-tech surveillance to shore up domestic security apparatuses. In some cases, dictators may transplant authoritarian instruments (or even legislation) from other regimes into the local context. Still in other cases, resources might be shared as a means of keeping a leader of similar ilk in power, such as Russian president Vladimir Putin’s support for Belarusian president Alexander Lukashenko or Maduro’s support for Ortega. In the latter case, both strongmen have a thing or two to teach one another about the tricks of political longevity and defeating one’s adversaries. Venezuela itself offers another case study, having adopted a Cuban-built counterintelligence apparatus hovering over its armed forces to ensure ideological conformity and loyalty within the ranks.

Whatever the exact causal linkages, what is clear is that a global network of coordinated actions among dictators fortifies their resilience. This recognition also means it is necessary to fight twenty-first-century dictators in a different, more global way. Venezuela’s Maduro, Nicaragua’s Ortega, and the gold scheme that flouted U.S. sanctions, are no exception.

To thwart the sinews that bind authoritarian governments in Latin America and the Caribbean, the United States must analyze them through the lens of a broader criminal network—one that spans the globe. That starts with increasing U.S. sanctions activity on the illicit flows out of the Maduro regime, to whichever country happens to be their recipient. There is a unique jurisdictional reach afforded to the U.S. dollar to be able to freeze assets and accounts. Despite increasing sanctions on the Ortega regime, and a sanctions architecture of over 400 designations on Venezuela, the Biden administration needs to leverage coordination mechanisms with Canada, the United Kingdom, and the European Union to create a less porous sanctions regime where illicit gold does not slip the dragnet. This is especially important in a scheme where Venezuela does not require intermediaries with exposure to sanctions to get gold to Nicaragua without a paper trail.

As a response to the Ortega regime’s self-inauguration on January 10, 2022, the Biden administration sanctioned ENIMINAS, as well as Ramón Humberto Calderón Vindell, the head of the company. However, given the difficulty of tracing gold’s origins, as well as the connection between Venezuelan gold and guerrilla groups, there are plenty of workarounds. A report from the Organization for Economic Cooperation and Development (OECD) last year highlighted several factors in tightening gold supply chains and bringing greater transparency to the gold industry. As it exists, the Venezuela-Nicaragua gold nexus contributes to immense suffering, violence, human rights abuses, and untold environmental degradation—one potential way to swing reticent countries, such as Mexico and some of the Northern Triangle countries, to vote for resolutions condemning Nicaragua at the Organization of American States.

Further, the difficulty faced by the United States in creating meaningful working relationships with countries of the Northern Triangle risks exposing them to being ensnared in illicit schemes involving gold flights. For instance, when Conviasa was not traveling to Nicaragua, it had known flights to Tegucigalpa where gold may have been transported. In general, Conviasa should be the airline non grata of Latin America because of its propensity to violate the law and the use of its cargo holds to ferry contraband. Those countries that refuse to sanction the airline, block its ongoing schedule of routes that touch down on their territories, or exercise greater scrutiny of the plane’s cargo hold should face consequences.

Lastly, in the wake of Russia’s unprovoked war in Ukraine, the United States should think about Russian connections to Venezuela and Nicaragua, including their respective gold mining industries, as Russia has been linked to the illegal transport and laundering of gold bars in the past. This will become especially important as the international community thinks about measures to isolate and punish Russian president Vladimir Putin, and in an ongoing context where both Maduro and Ortega have expressed support for Russia’s military operations. 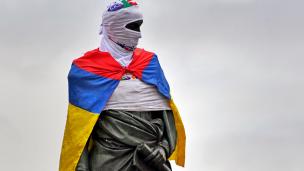 Maduro’s Fortune: Petro in Colombia and a Left-Leaning Latin America
By Ryan C. Berg, Alexandra Winkler
June 27, 2022
In the News

Elections. They have consequences.
Politico | Nahal Toosi and Quint Forgey
June 21, 2022
In the News