Russia’s war in Ukraine has scrambled global energy markets, and European leaders are looking for quick alternatives to Russian fossil fuels in order to enhance energy security. Natural gas presents the most acute challenge because Europe currently imports 45 percent of its gas from Russia. European leaders are looking to the United States and other producers for additional liquefied natural gas (LNG) to replace Russian gas, recently agreeing to buy an additional 50 billion cubic meters (bcm) of U.S. LNG annually through 2030.

However, not long before Russia’s invasion of Ukraine, European buyers were turning away from U.S. LNG due to climate concerns. The European Union has committed to cutting greenhouse gas (GHG) emissions by 55 percent below 1990 levels by 2030, and to achieving net-zero emissions by 2050. That long-term climate commitment has made European leaders wary of supporting long-lived gas infrastructure, despite the continent’s profound need for short-term supply.

How U.S. LNG exports can help meet short-term demand, while also remaining consistent with a rapidly decarbonizing Europe, is an open question. Resolving it will go a long way toward improving EU energy security, as well as the long-term market opportunity for U.S. LNG in a decarbonizing world.

In the short term, the pivot to U.S. gas represents incremental good news for the climate. Emissions associated with supply chains for U.S. LNG can be up to 50 percent lower than those associated with Russian pipeline gas (though the actual performance is contingent on exactly where in the United States the gas is produced). This is a lucky coincidence and has more to do with old leaky Soviet pipeline infrastructure than the U.S. oil and gas industry’s superior environmental practices. However, to be a viable long-term energy option for Europe and other economies in a decarbonizing world, U.S. LNG will still need to address its substantial carbon footprint—both upstream emissions and the emissions embedded in the cargo itself.

U.S. LNG has the potential to be the cleanest in the world, helping to retain its competitiveness through 2030 and beyond. But the industry will need a policy framework that supports innovation in carbon management and best practices for methane emissions through a mixture of regulations and tax policy.

The industry should start with upstream emissions, which are a growing concern for buyers in Europe. All told, methane and CO2 emissions from natural gas production, transmission, distribution, and liquefaction were roughly 360 million metric tons, or 7 percent of net U.S. GHG emissions in 2020, according to the U.S. Environmental Protection Agency’s (EPA) latest preliminary greenhouse gas inventory (using 100-year global warming potentials, or GWP). Most methane emissions occur when gas is vented as part of the drilling and well completion process or through leaks across the pipeline network. Most CO2 emissions occur from combustion of natural gas used for energy as production sites, processing plants, and pipeline compressors.

The industry and others have developed sophisticated technologies and operational practices that can dramatically cut supply chain emissions. The EPA has proposed regulations that would require many of these methods to be implemented across the board. The EPA estimates that the proposed regulations alone could cut methane emissions by 77 million metric tons CO2e

Congress is also contemplating action to address supply chain emissions. The methane program considered in the now-stalled Build Back Better Act (BBBA) would have provided grants for cutting emissions and penalties for failing to do so. Enhancements to the 45Q tax credit Lfor carbon capture included in the BBBA, if enacted, would provide powerful incentives to capture emissions from processing plants and LNG terminals—an application of carbon capture technology that is already relatively affordable. Other modifications to the 45Q carbon capture tax credit contained in the BBBA would provide up to $180 per ton for direct air capture (DAC) of atmospheric CO2 along with permanent underground storage. Congress could put in place additional incentives to take advantage of opportunities to cut emissions by electrifying pipeline compressors and other equipment.

With the right incentives and evolving market dynamics, U.S. LNG could continue to provide cleaner gas to U.S. allies and trading partners. For the next decade and perhaps beyond, this may be enough. Eventually however, the United States and other major emitters will have to deal with an even bigger challenge related to the emissions from gas combustion. A net-zero world will need tools to deal with consumption of gas, which accounts for more than two-thirds of total lifecycle emissions for U.S. LNG. On a per bcm basis, 1.7 million metric tons of [result from a typical cargo of LNG, while production emissions are roughly 0.9 million metric tons. 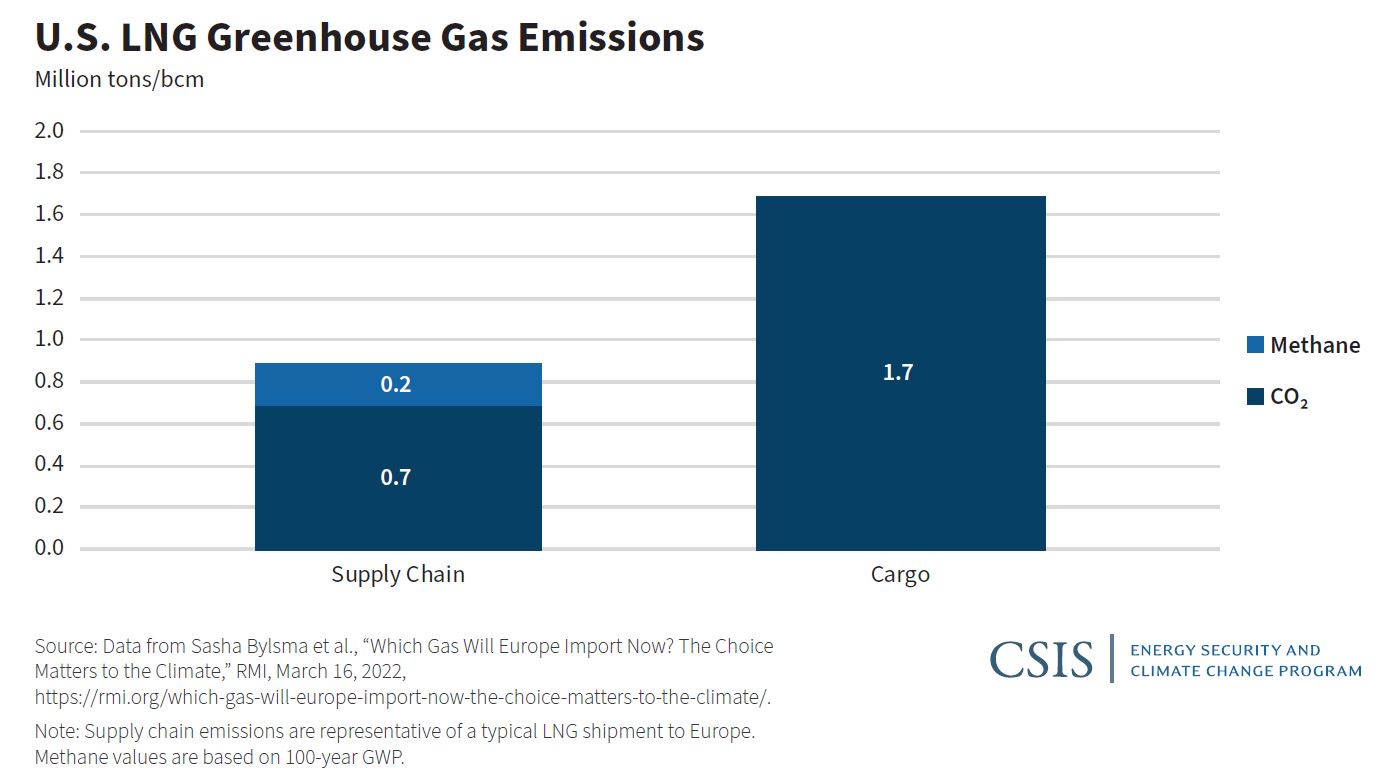 The industry and policymakers should be thinking now about the best solutions to this challenge and how U.S. LNG and natural gas more broadly will fit in a net-zero world. Investing now in technologies that can remove carbon from the atmosphere as well as ways to cut the fossil carbon content of LNG cargoes may pay dividends later in preserving market opportunities for LNG.

While there is plenty to do in this decade to cut supply chain LNG emissions, long-lived assets like LNG export terminals will last much longer. The building blocks are on the table for U.S. LNG to get on a path to net zero and preserve a role in Europe’s and perhaps the world’s energy system for the long-term. But starting down that path will require complementary policies from Congress, the Biden administration, and European partners. With the right incentives in place, one can envision support for export terminal financing where projects that commit to steady reductions in supply chain and cargo emissions get preferential treatment. If the U.S. LNG industry is serious about bolstering energy security and maintaining a role for itself in a net-zero future, it is time to push for a policy package that will provide the necessary tools.

John Larsen is a partner at Rhodium Group and a non-resident senior associate in the Energy Security and Climate Change Program at the Center for Strategic and International Studies in Washington, D.C.

Climate Change , Energy and Sustainability , and Energy and Geopolitics