In our last paper, we discussed the current state of the U.S. vertical lift fleet and how past investment decisions helped shape this fleet. This brief will focus on future investments.

Vertical lift aircraft are a substantial part of the U.S. military, both in terms of fleet size and investment levels. Helicopters and tiltrotors make up nearly half of the military’s combat aircraft fleet, and with more than $8 billion being spent on buying and developing these aircraft each year, they draw a substantial share of the defense budget.

However, despite major investments, the vertical lift fleet has not undergone generational change since the 1980s. This is especially true within the Army, which has the largest vertical lift fleet. With a new joint effort called Future Vertical Lift (FVL), the Department of Defense (DoD) plans to deliver the next generational leap in capability. This brief (along with a forthcoming third brief ) covers the prospects for vertical lift modernization in the coming decades (using the FY19 Future Years Defense Program (FYDP) as a baseline): the timing and pace of FVL, potential upgrades to the current fleet, and long-term options for FVL.

FVL is the U.S. military’s main effort to deliver generational change to its fleet of vertical lift aircraft. Compared to today’s aircraft, FVL is expected to provide substantially better speed and range. The approach is comprehensive. It includes the goal of producing several aircraft variants capable of replacing the Army’s most important aircraft, such as its primary utility helicopter, the UH-60 Blackhawk. Moreover, the long-term ambition of FVL encompasses the entire spectrum of aircraft types, ranging from lightweight scout aircraft, such as the OH-58 Kiowa, to heavyweight transport aircraft, such as the CH-47 Chinook. While the Army is the first mover, FVL is a joint effort that supports each of the services including the Navy, Marine Corps, Air Force, and Special Operations Command (SOCOM). In addition to improved operational performance, the military is seeking to design FVL for affordability, sustainability, and the ability to upgrade.

In total, there are five aircraft types, or “Capability Sets,” that the military expects FVL to deliver. The table below from a RAND report on FVL lists a framework for what the Capability Sets could look like.1

The effort to develop the next generation of vertical lift capability is well on its way within the industry. Sikorsky/ Boeing and Bell are the two main teams involved with the initial stage. They have invested in the development of new prototypes and are competing to sell their designs to the Army and become the main manufacturers of next- generation vertical lift aircraft.

The two teams’ design approaches are radically different. Sikorsky/Boeing’s SB-1 Defiant is a compound helicopter with coaxial rotors, which features two main rotors that spin in opposite directions. Due to its compound design, the SB-1 suffers fewer of the usual aerodynamic penalties of existing helicopters, allowing it to fly faster and farther. Bell’s V-280 Valor is a tiltrotor aircraft, which can take off like a conventional helicopter and then tilt its rotors to fly like a propeller plane.2 The V-280 can thus leverage the advantages of both rotary wing and fixed wing aircraft depending upon its desired flight regime, which also allows it to fly faster and farther than existing helicopters.

Until recently, the competition for FVL has focused on medium-lift (Capability Set 3: similar to the UH-60 Blackhawk). Last year, the Army initiated an effort to prototype a future attack reconnaissance aircraft (Capability Set 1: similar to the OH-58 Kiowa Warrior). The effort to date has been focused on prototyping efforts, including building prototypes of the two industry proposed airframe designs and prototyping the mission systems architecture which delivers military capability. However, FVL is only in the earliest stages of a traditional acquisition program of record, meaning that there has been no formal decision to move forward with an actual program that encompasses design, production, and delivery of an operational platform. “Future Vertical Lift Medium,” the first FVL-specific funding line, only began with the president’s fiscal year 2017 budget request.3 The Army has yet to spend more than $15 million per year on “Future Vertical Lift Medium.” These investments are not insignificant. However, within the context of total vertical lift spending (over $8 billion each year), these numbers suggest that a shift towards generational change has a long way to go. 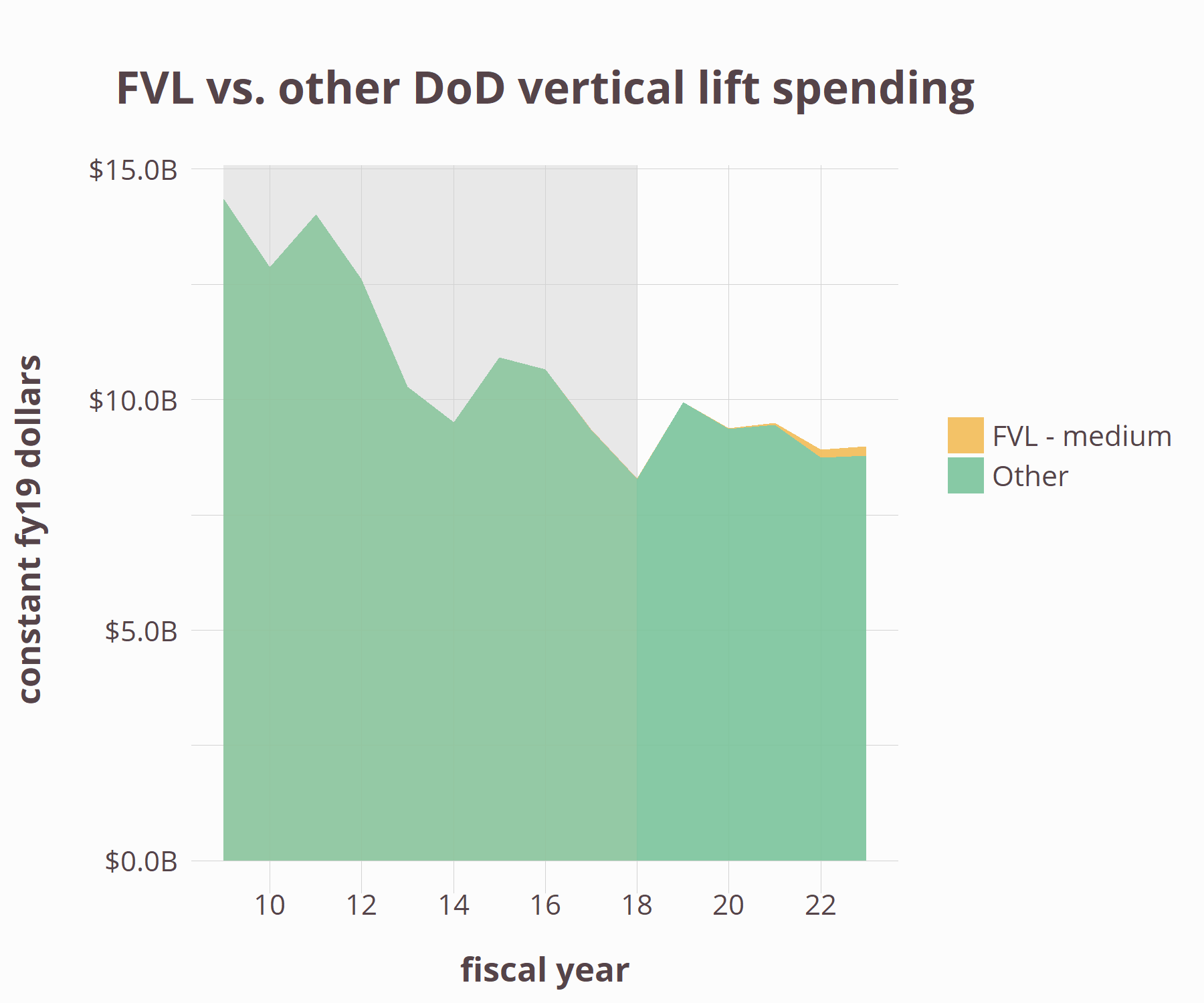 The Army has been designated as the lead service for acquisition of FVL Capability Set 3 and has also led the related prototyping programs, so Army budget challenges may constrain the pace of FVL.

According to DoD projections from the fiscal year 2019 FYDP, the United States planned to spend $47 billion on vertical lift (procurement and RDT&E) over the next five years (2019-2023). This would mean a 4.1 percent decline in spending from the past five years (2014-2018), which includes several budget years when overall defense spending was declining.

Note: Like before, the shaded region, 2009-2018, reflects money that has already been spent or enacted (2018). The clear region, 2019-2023, reflects projected spending based on the president’s budget request for FY2019. Source: CSIS analysis; Future Years Defense Program.

In the chart above, “Future Vertical Lift Medium” makes up 28 percent of the “Aviation - General” category. This category consists of both Army and Navy funding, 72.3 percent and 27.7 percent, respectively.

Defense projections can be unreliable. The exact amounts dedicated to vertical lift modernization in the next five years will vary from the projections in the president’s fiscal year 2019 budget request. The president’s fiscal year 2020 budget request already reinforces this point. For example, this new budget request includes substantial funding for the Future Attack Reconnaissance Aircraft (FARA). FARA is an FVL effort and funding line that was not even included in the previous budget request. Similarly, the Marine Corps added funding for Attack and Utility Replacement Aircraft (AURA). If funded by Congress, FARA and AURA would add a substantial RDT&E investment and accelerate the process on FVL.

A thorough assessment of these budget requests offers valuable insight into the state of DoD programs. This helps evaluate the degree to which defense modernization is backed up with financial investments. Moreover, in the case of FVL, the variability between budget requests reflects an environment where long-term investments are still in flux.

Still, while the 2019 and 2020 budget requests provide more insight, most projections do not look beyond 2024. And without more specificity from other DoD sources, it remains difficult for policymakers and the public to plan for vertical lift modernization. To address this lack of information, CSIS designed and built a web-based app that makes it possible to evaluate modernization tradeoffs and will soon be available to the public. In a forthcoming brief, we will focus on long-term vertical lift investment scenarios, and this app will be used to inform some of our findings.

Gabriel Coll is a program manager and research associate with the Defense-Industrial Initiatives Group (DIIG) at the Center for Strategic and International Studies (CSIS) in Washington, D.C. Andrew Hunter is a senior fellow in the International Security Program and director of DIIG at CSIS.

This brief is made possible by the generous support from Bell.