Before You Cut Foreign Aid to Fund Defense, Consider Where it Goes and What it Does for U.S. Troops and National Security

Foreign aid has long been seen as the stepchild of U.S. national security. Polls show that most Americans have a grossly exaggerated picture of the size of the U.S. foreign aid effort, and no idea of where it actually goes, or what its purpose is. For many Americans, foreign aid is seen as an exercise in idealism at the expense of Americans and at the expense of the needs of America's poor and its tax payers. This makes the idea of cutting back on State Department and USAID spending to add money to the U.S. military and Department of Defense seem all too attractive to many who don't examine the details.

The reality of foreign aid spending however, is very different. In FY2017, President Obama requested a total of $42.4 billion in all forms of aid, including security assistance aid. This amounted to a grand total of 1.02% of President Obama’s total FY2017 budget proposal of $4.15 trillion. It compares with over $600 billion in U.S. defense spending, and it should be kept in mind that much of U.S. foreign aid serves vital U.S. national security interests.

Last fall, in a very different political climate, Max Bearak and Lazaro Gamio developed a series of graphics for the Washington Post showing how U.S. aid spending was allocated by country. These graphics only got passing attention at the time, but they send a key message today.

Figure One shows how security and economic assistance were allocated by function. Some $16.8 billion—40% of the total—goes to supporting countries where U.S. troops are fighting, and to efforts including counterterrorism and counternarcotics operations. Much of the remaining $25.6 billion goes to providing aid to refugees like those from Syria, to humanitarian crises and famine, and to sustaining the economies of nations where U.S. forces are fighting terrorism and extremism. Another key element of U.S. foreign aid fights diseases like Ebola and AIDS overseas—directly reducing the threat that the spread of disease poses to the United States.

Source: Max Bearak and Lazaro Gamio , Everything you ever wanted to know about the U.S. foreign assistance budget, Washington Post, https://www.washingtonpost.com/graphics/world/which-countries-get-the-most-foreign-aid, 18.10.16

The Warfighting and Security Impact of Foreign Assistance

Figure Two puts the warfighting impact of U.S. foreign aid in closer perspective. It shows the top ten recipients of both economic and security assistance. It shows that the combined total of such aid is absolutely critical to any hope of victory in Afghanistan, where the spending in both Afghanistan and Pakistan are critical to the war effort. Another key portion of foreign aid allows Israel to remain secure and deter the threat of war, while other portions aid the fight in Iraq, help key allies like Egypt and Jordan, and underpin the peace between Israel, Egypt, and Jordan. Other aid efforts deal with critical threats of famine and with the need to provide economic stability in countries like Nigeria and Ethiopia that are threatened by Islamist extremism. 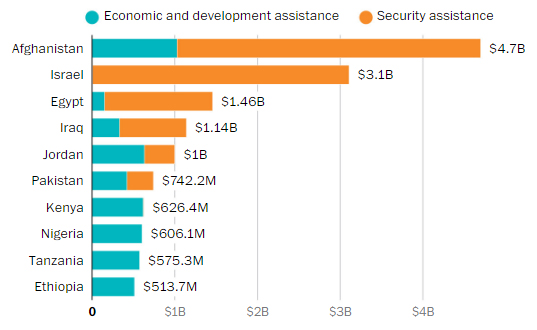 Source: Max Bearak and Lazaro Gamio , Everything you ever wanted to know about the U.S. foreign assistance budget, Washington Post, https://www.washingtonpost.com/graphics/world/which-countries-get-the-most-foreign-aid, 18.10.16

The critical role that security assistance plays in supporting our troops and the fight against terrorism is even more clear in the data shown in Figure Three. It is vital to reaching and to keeping a hard-won peace in Colombia, and to fighting narcotics in Mexico. There would be little chance of a U.S. victory in Afghanistan or Iraq without such aid, and the United States would face critical problems in playing an active role in Syria. This form of aid is the major tangible support the United States provides to Ukraine, and once again, Figure Three illustrates just how critical such aid is to the security and stability of allies like Israel, Egypt, and Jordan.

In other cases where the total aid is less than $10 million, the aid often provides critical training of foreign militaries—creating the relationships and common values that are critical to U.S. military advisory missions and the ability of the United States to project power throughout the world to meet new threats and contingencies. Such foreign aid both reinforces deterrence and security partnerships, and creates a climate vital to creating strong host country and U.S. military relationships in the event of a crisis or conflict. The larger foreign aid expenditures are the key to limiting U.S. boots on the ground, and in building effective local forces. The smaller expenditures are critical insurance policies for U.S. forces in the future. 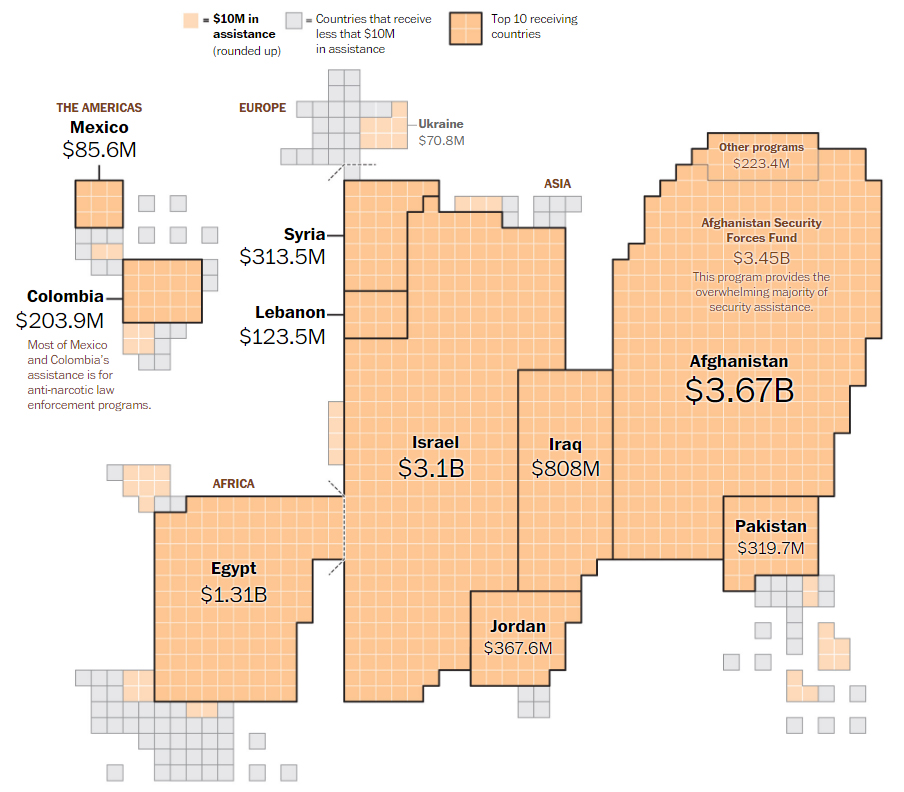 Source: Max Bearak and Lazaro Gamio, Everything you ever wanted to know about the U.S. foreign assistance budget, Washington Post, https://www.washingtonpost.com/graphics/world/which-countries-get-the-most-foreign-aid, 18.10.16

The Equally Critical Role of Economic and Development Assistance

The national security value of economic and development assistance is less obvious, but no less real. The allocation of such aid is shown in Figure Four. Once again, it is clear that such aid has been critical to the fighting in Afghanistan. In fact, the Afghan government probably could not have survived the impact of the massive cuts in military and economic aid spending after 2014 if the United States had not led the effort to keep providing economic aid, and the crisis between Afghanistan and Pakistan might have done far more to limit Afghan trade. U.S. foreign aid to Iraq helped both to fight ISIS and to limit Iranian influence. Aid to Syria, Egypt, Lebanon, Jordan, and the West Bank and Gaza has supported the fight against ISIS, has supported the Arab-Israeli peace process, and has helped ease the Syrian refugee crisis.

As previously mentioned, aid to Ukraine helped limit the impact of Russian aggression. Aid to Colombia and Central America had a key stabilizing impact in that region. Aid to Asian states supported the U.S. rebalancing of its forces to Asia, as well as U.S. strategic partnerships with key Asian states. The list of African states that received such aid is largely a list of countries with critical internal problems, or countries that face serious risks of Islamist extremist movements either on their borders, or within them.

Here, it is critical to understand that economic stability and development are often the best way to limit or avoid the emergence of serious terrorist threats and insurgencies, and reduce or eliminate new burdens in direct U.S. defense spending. It is also impossible to win a counterinsurgency campaign, or to create a lasting defeat of any violent extremist movement, unless a victory in counterterrorism or counterinsurgency is supported by political and economic stability. As the U.S. military has warned again and again, such struggles cannot be won simply at a tactical level, or by military means. These struggles are civil-military conflicts, and must be fought at both the civil and military levels. 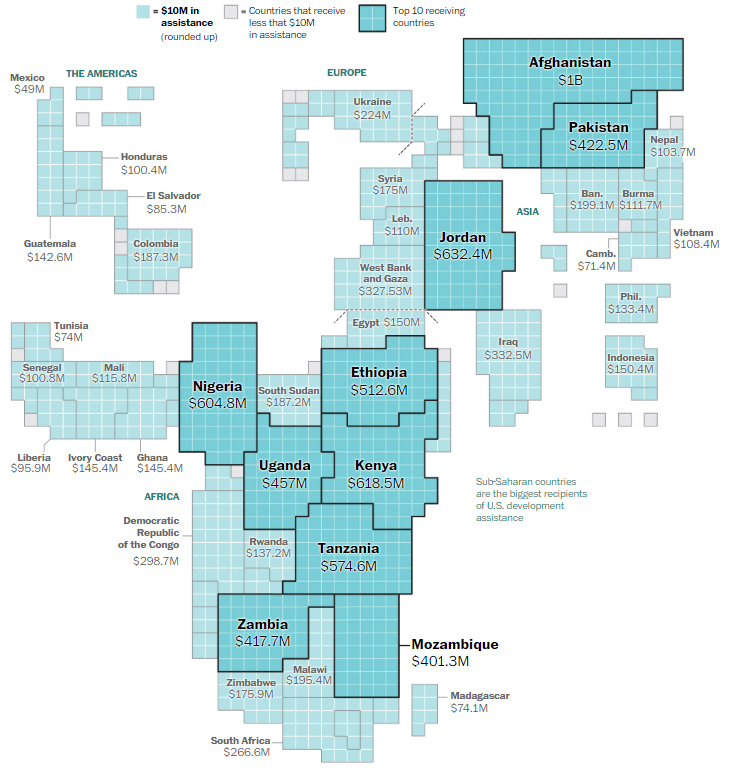 Source: Max Bearak and Lazaro Gamio , Everything you ever wanted to know about the U.S. foreign assistance budget, Washington Post, https://www.washingtonpost.com/graphics/world/which-countries-get-the-most-foreign-aid/, 18.10.16

There is an all too real need to boost U.S. national security spending. Readiness has eroded to a critical level in some areas, and the modernization programs of every military service are seriously imbalanced and are lacking in clear direction. The United States also cannot solve its problems simply by spending in a given year, or by focusing on today's forces and problems. The United States faces a mix of rising challenges from Russia, China, North Korea, and a combination of Iran and Islamist extremism in the Middle East that requires for more effective force planning, programming, and budgets that will need to be sustained indefinitely into the future.

Slashing security aid, and cutting the staff of the State Department and USAID with the bureaucratic equivalent of a meat axe are not, however, a constructive approach to national security. There are real problems that need to be solved. The two State Department Quadrennial Diplomacy and Development Reviews (QDDR) in 2009-2010 and 2014-2015 were dismal failures in creating a better structure for the Department, and USAID has never been properly integrated into the State Department. There is a need for change, and for making aid more effective, but slashing critical programs and cutting staff without a plan to meet real world needs is the reverse of Schumpeter's "creative destruction." It is destruction without creativity.

Secretary Gates and Secretary Clinton did start to develop a real partnership between the Department of Defense and Department of State during the Afghan and Iraq conflicts, but efforts to create effective civil-military plans for the fighting in Afghanistan and Iraq remained a failure. The NSC never developed anything approaching a serious "whole of government" approach and—if anything—the military shifted back to a tactical focus and the State Department turned away from a role in stability operations and nation building.

Flawed as the execution of some aspects of the current security assistance program may be, even its flawed programs are almost always a better approach to U.S. national security than having no program, or having one too small to be effective. It also does not take a great expert in foreign relations, counterterrorism, and counterinsurgency to look through the list of countries in Figure One to Figure Four to realize that no amount of tactical victories or military efforts will be a substitute for political and economic stability in those countries. This is especially true when —U.S. efforts in nations like Afghanistan, Iraq, and Syria are limited to the use of airpower, to train and assist missions, and to the limited use of combat support and Special Forces.

In virtually every case, the same recipient countries will need security and economic/development aid in FY2018. In the case of some strategic partners like Afghanistan and Iraq, that need may actually increase, and new cases of major instability in nations like Yemen and Somalia must be considered. The challenge to both the Trump Administration and to Congress is to create a far better integrated approach to defense and foreign aid spending for both war fighting and shaping strategic partnerships, and to make things better rather than make them worse.