A Better Year Ahead for the Caribbean?

Commentary by Scott B. MacDonald

2017 will be another challenging year for the Caribbean. On one hand, global growth prospects appear stronger, wages are finally gaining traction in the United States, commodity prices are gradually improving, and fiscal retrenchment in a number of countries could allow them to take advantage of better global conditions. On the other hand, policy uncertainty from the incoming Donald Trump administration looms large for Caribbean leaders, touching upon everything from geopolitical tensions to the future of the region’s financial sector and trade relations. The cup is probably more half full than half empty, with 2017’s real gross domestic product (GDP) growth forecast at 3.6 percent by the International Monetary Fund, a notch above 2016’s disappointing 3.4 percent.

The most significant factor for the Caribbean economy is an emerging Trump administration foreign, security, and trade policy philosophy. The new administration has articulated an economic policy platform, arguably protectionist in tone, based on more “equitable” trade deals for the United States (“America First”), bringing back U.S. jobs, boosting economic growth, and a major corporate tax cut to repatriate capital from overseas (which includes from Caribbean offshore financial centers). At the same time, the U.S. Federal Reserve has signaled that it will raise rates further in 2017, probably two to three times, depending on the strength of economic data.

For the Caribbean, the most pressing issues are further fiscal consolidation in light of rising U.S. interest rates (which includes debt management issues, as much of it is denominated in U.S. dollars), de-risking in the financial sector, law and order issues, reducing high levels of unemployment in a number of countries, and pressures from a deterioration in U.S. relations with Mexico and China, as well as the ongoing implosion of the Venezuelan economy.

Further fiscal consolidation is a priority for the Caribbean. Much of the region has run for years on fiscal deficits, partially financed by external borrowing, which has led to heavy debt burdens. This was certainly the case for Jamaica, Grenada, Saint Kitts–Nevis, and Puerto Rico. While improvements have occurred with the three countries over the past two years, the Commonwealth Caribbean defaulted on its $72 billion public-sector debt in 2016 and faces further entrenchment in 2017. Also facing tough fiscal consolidation is Barbados, which is dealing with high and rising debt levels, a substantial fiscal deficit, and slow growth. Along the same lines, it should be noted that Belize is seeking to restructure its debt again, while the U.S. Virgin Islands have sunk into acute fiscal and debt management problems. In many cases, the problems in Caribbean nations encompass expenses outstripping revenues, bad weather causing unpredictable costs (hurricanes), real GDP growth forecasts failing to match expectations (often because of external factors), and loose financial management leading to corruption and taking a bite out of budgets.

Related to budgetary issues is the ongoing need for better infrastructure, in particular in the area of power generation and distribution. Although some of the pressure on energy costs has been mitigated by the fall in oil prices since 2014, the need remains for improvement in the efficiency of domestic power utilities throughout the Caribbean. This would allow governments to reduce costly government subsidies, while further efforts are needed to increase renewable energy usage. 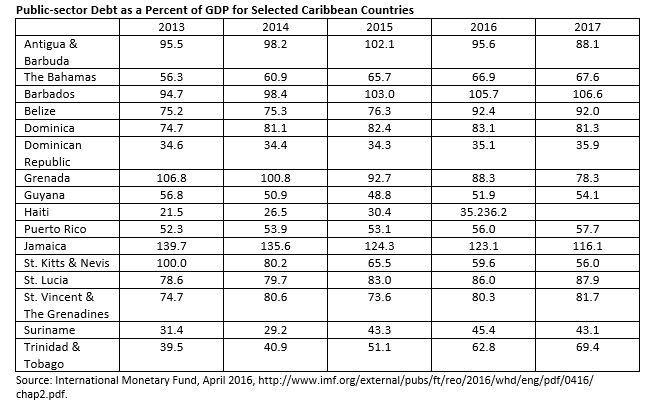 Caribbean economies also face pressure from the de-risking of the global financial sector. Banks in North America and Europe are encouraged by their governments to de-risk their exposure to locations where regulatory supervision is regarded as less effective and allows the penetration of money-laundering activities for criminal enterprises and terrorist groups. Long perceived as a region for slap-dash banking regulation and secretive offshore financial centers, many Caribbean jurisdictions have gone to considerable lengths to improve supervision and transparency.

While the effort to de-risk is well intentioned, as it seeks to eliminate high-risk threats to banks operating in the world, it is penalizing the Caribbean. International Monetary Fund managing director Tao Zhang in November 2016 noted: “ …the withdrawal of correspondent banking relationships presents clear and imminent challenges to the Caribbean. Several banks across the region have lost all or some of their correspondent banking relationships. International banks have stopped providing some services and have dropped clients that they consider to be ‘high risk.’ ”

The result of de-risking is that it is hurting not only the “bad guys” who are doing illicit activities, but also the legitimate economy that is dependent on key banking services to help local businesses work with tourists, remittances, and foreign companies, as well as to provide the necessary credit for trade. Most Caribbean countries have very open economies, and access to external financial institutions is critical. The situation is further complicated by local Caribbean financial sectors having their own set of problems with poor asset quality, low profitability, and inadequate capital.

Another major challenge, with a strong political overtone, is the need to improve personal security. A number of Caribbean countries have very high rates of violent crime, including murders and armed robberies. The root causes include a wide availability of weapons, the use and trafficking of drugs, the presence of gangs, high levels of unemployment, and weak criminal justice systems. The Caribbean’s close proximity to Venezuela, a major drug transit state, certainly factors into the picture—many island jurisdictions are major transit points in moving illicit drugs from Venezuela to either North America or Europe. High levels of criminality do not help the tourist trade, which is the main money earner for many Caribbean economies.

The Caribbean’s economic outlook also cannot sidestep geopolitical factors. Cuba casts a long shadow over the Caribbean, especially in terms of tourism and its close relations with Venezuela. However, Venezuela’s economic meltdown hurt Cuba, which had grown dependent on the Latin American oil exporter for considerable assistance. It is estimated that Cuba’s real GDP contracted by 0.6 percent in 2016, the first such negative rate since 1993 when the Soviet Union went out of business and Russia radically reduced assistance.

Although the Barack Obama administration’s normalization policy remains controversial in the U.S. policy context, it was enthusiastically embraced by the business community, ranging from airlines and hotel chains to agricultural exporters. U.S. tourists arrived in Cuba in record numbers in 2016, hitting over 2 million by mid-2016 according to Cuban sources. In 2015, the island saw 3.52 million visitors, up 17.4 percent from the prior year, making it second to the Dominican Republic in tourist visitors to the Caribbean, a development watched closely by other tourist-dependent Caribbean economies.

China is the other major geopolitical factor that has economic implications. Chinese companies have renovated hospitals, built sports stadiums, upgraded ports, and built roads, while Chinese products travel through the Caribbean via the Panama Canal, using local port facilities on their way to the United States. At the same time, high-ranking Chinese officials, including President Xi Jinping, have made a point to visit the region, offering assistance and trade. China is also a major stakeholder in the Caribbean Development Bank. Although the Asian country is not a major trade partner for most Caribbean countries, its activity in the region could complicate Caribbean trade relations with the United States, as the Sino-American relationship becomes more strained.

The global economy is in a state of change—moving away from the past acceptance of globalization and trade deals to a more protectionist system, in which national interests are likely to factor larger. Like it or not, Caribbean economies must compete in this changing global economy and be ready to ride through potential upheavals in trade, finance, and travel. Consequently, it is time for more institutional reforms, a strengthening of the rule of law, further transparency, and a stronger effort at regional integration. The last assumes greater importance in a world where larger economies are likely to take less heed of the needs of the smaller economies unless they can forcefully state their case operating from a unified base. Failure to make further gains in fiscal consolidation, provide basic security for both citizens and tourists, and economic unity could well leave the Caribbean afloat in a global economy that has considerable potential down risks.

Scott B. MacDonald is a senior associate with the Americas Program at the Center for Strategic and International Studies in Washington, D.C., and the chief economist at Smith’s Research & Gradings.

© 2017 by the Center for Strategic and International Studies. All rights reserved. Photo credit: HECTOR RETAMAL/AFP/Getty Images