CSIS hosted a panel of experts—moderated by Victor Cha and featuring Ankit Panda, Joe Bermudez, Sue Mi Terry, and Markus Garlauskas—for a discussion of the impact of the recent surge in North Korea's missile testing. The group discussed North Korea's recent provocations and what they mean for its overall capabilities, what to expect next from North Korea, and steps Washington could take to strengthen its position vis-à-vis Pyongyang. The full video and transcript are available on the CSIS website.

While the world has focused on Ukraine in recent weeks, North Korea has significantly increased the tempo of its missile tests. During the first year of the Biden administration, the North Korean regime was relatively quiet in both rhetoric and action, perhaps because of the difficulties it has faced amid its Covid-19 lockdown or because it was waiting to see if President Biden might be willing to unilaterally lift sanctions. So far in 2022, however, the regime has embarked on a systematic and deliberate campaign of weapons testing. Pyongyang has carried out a total of 13 weapons tests, as shown in the table below. 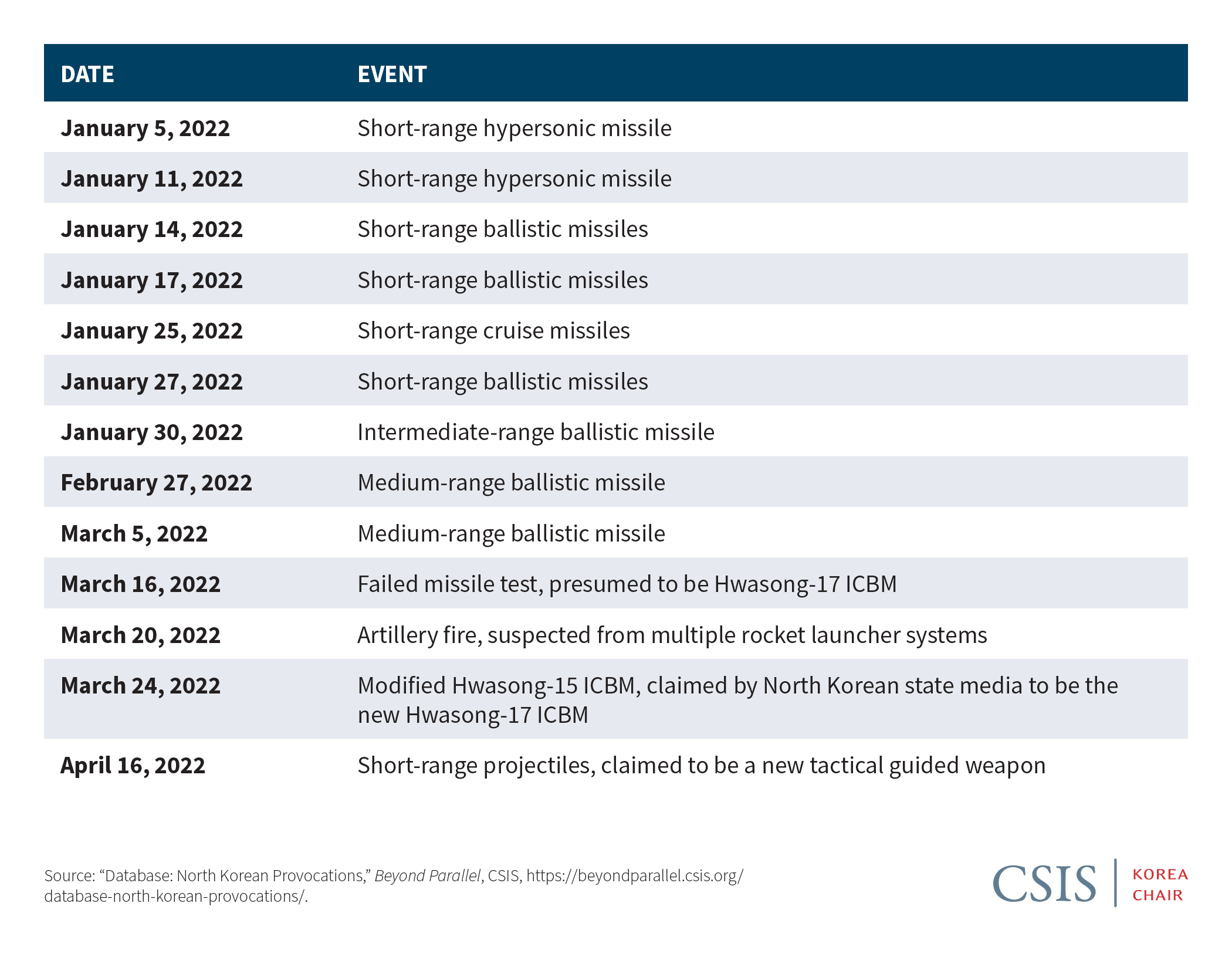 What Is the Meaning of These Tests?

Each of North Korea’s missile tests has gotten Pyongyang closer to its goal of developing a credible, survivable nuclear weapons delivery system that can target the U.S. homeland. Presumably, Pyongyang hopes that such a capability would both deter the United States from attacking North Korea and sow doubt among U.S. regional allies that Washington would risk one of its own cities to defend them against a North Korean attack. North Korean leader Kim Jong-un laid out his aims in this area during his remarks at the Eighth Party Congress of the Workers’ Party of Korea in January 2021. In unusually specific detail, he was very transparent about the goals of North Korea’s weapons development. Kim mentioned research focused on “perfecting the guidance technology for [a] multi-warhead rocket,” working toward “attaining an advanced capability for making a preemptive and retaliatory nuclear strike by further raising the rate of precision good enough to strike and annihilate any strategic targets within a range of 15,000 kilometres with pinpoint accuracy,” and developing “solid-fuel engine-propelled inter-continental underwater and ground ballistic rockets,” which would shorten the response time the United States and South Korea would have to preempt a North Korean missile launch (see more passages from Kim Jong-un’s speech in the appendix).

More recently, at a military parade marking the 90th anniversary of the founding of the Korean People’s Revolutionary Army on April 25, Kim Jong-un donned a white military marshal’s uniform and expressed his determination to increase the strength of the country’s nuclear forces “in terms of both quality and scale.” Other elements of the speech seemed to indicate a shift in North Korea’s nuclear doctrine, specifically when Kim noted that “our nukes can never be confined to the single mission of war deterrent” and that the country’s nuclear forces may be used in an “unexpected second mission” if outside forces violate North Korea’s “fundamental interests.” Weapons displayed at the parade included the Hwasong-17 (first displayed in October 2020), hypersonic gliding missiles like the Hwasong-8 (tested in September last year), and what seemed to be a new type of solid fuel missile, possibly the Pukguksong-6 (not yet tested). Overall, the event signaled to both internal and external audiences that Kim continues to advance his nuclear and missile programs in line with his January 2021 pledges and has no plans to ease up on his drive in this area.

Although North Korea has yet to demonstrate all of these technical benchmarks, testing is critical to making progress. Even failed tests provide crucial information in developing missiles such as the Hwasong-17, which is the largest liquid propellant missile ever built and deployed on a road-mobile launcher. North Korea’s higher tempo of provocations indicates that it is increasingly willing to accept the risks inherent in missile testing—including political risks of backlash from China, the United States, and South Korea as well as risks of failure—in order to strengthen its missile program.

In the coming weeks and months, more North Korean missile tests and advances in its program should be expected for a number of reasons:

What Are the Key Capabilities to Watch For?

As stated in Kim’s January 2021 speech, North Korea’s ambitions extend beyond fielding a primitive existential deterrent. There are some key North Korean capabilities to watch for on the horizon, including:

There are no easy options for the United States and South Korea to thwart further advances in North Korea’s missile program. Despite the Biden administration’s offer to meet “without preconditions,” North Korea has expressed no interest in talking with the United States in recent months and is likely to continue to avoid negotiations for the rest of 2022, if not longer, as it works toward achieving the technical benchmarks that Kim detailed in the Eighth Party Congress. That said, some steps could help to alter Pyongyang’s cost-benefit calculations in its missile development efforts:

Victor Cha is senior vice president and Korea Chair at the Center for Strategic and International Studies (CSIS) in Washington, D.C. Katrin Fraser Katz is an adjunct fellow (non-resident) with the CSIS Korea Chair.

This is the second of three reports of the CSIS Korea Chair 2022 Tipping Points project, which looks at potential variables for critical change in North Korea and the peninsula. This project is supported by CSIS and the Korea Foundation.

Below are excerpts from Kim Jong-un’s remarks on weapons development during the Eighth Party Congress of the Workers’ Party of Korea.


1 A planned reduction to three interceptors would theoretically improve these numbers.

Defense and Security , Geopolitics and International Security , and Nuclear Issues