Can European Energy Cope with a Conflict in Ukraine?

How would a conflict in Ukraine affect European energy security? The answer to this question depends on many unknowns. Any assessment must begin with observations about Ukraine’s energy situation and its role in the European energy system. Only then can the significance of different scenarios be fully understood.

Ukraine used to be a key node in the European energy system, but its criticality has diminished. In the 1990s, most gas that Russia exported to Europe crossed Ukraine. But Russia has since diversified routes. In 1994, it started construction on the Yamal–Europe pipeline through Belarus and Poland, which reached its full capacity in 2006. In 2003, Russia completed a pipeline to Turkey (Blue Stream); in 2011, it completed a route to Germany (Nord Stream); and in 2020, TurkStream provided a second link to Turkey. This multi-decade Russian effort has reduced Ukrainian transit by 70 percent—from over 140 billion cubic meters (bcm) in 1998 to less than 42 bcm in 2021. 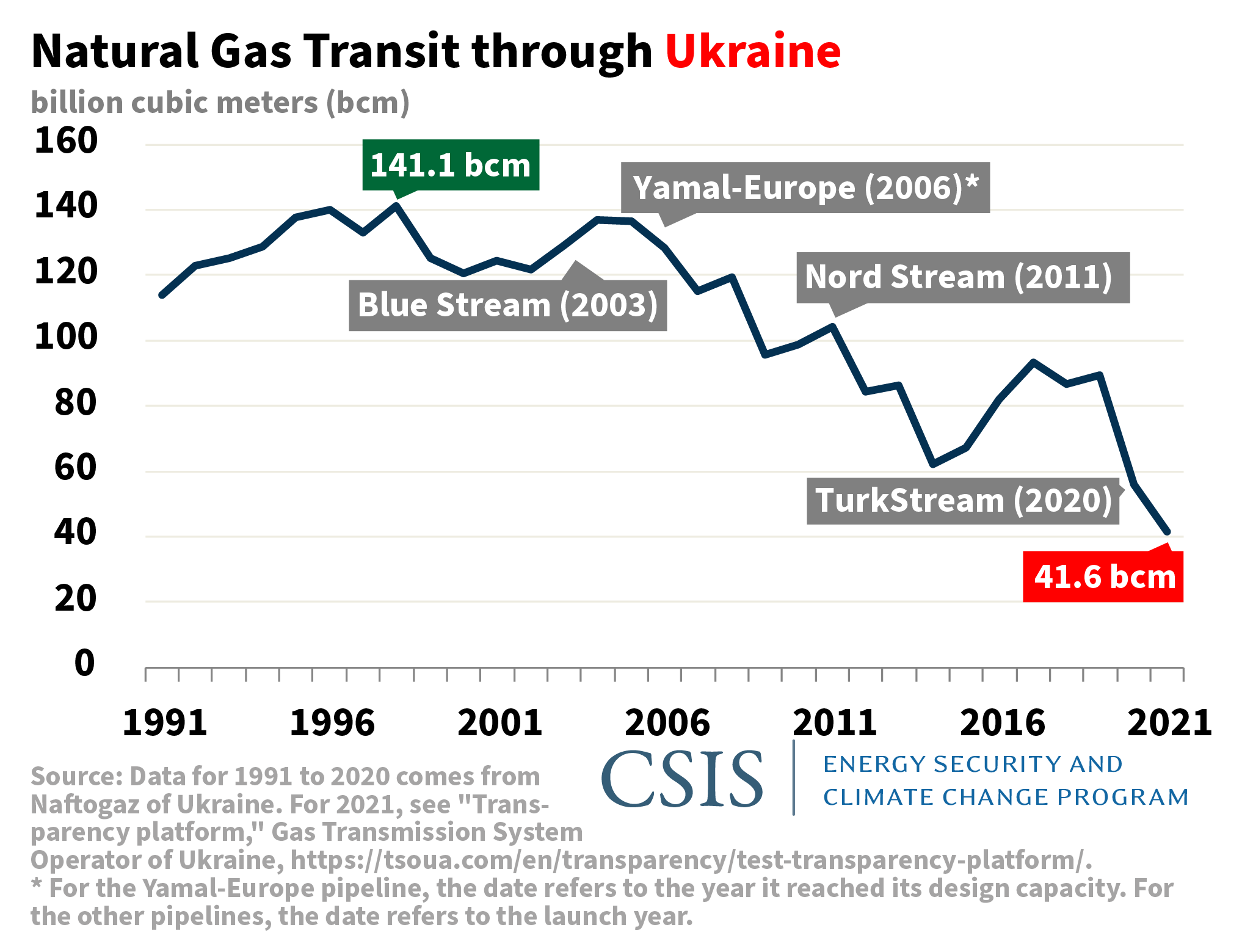 As Ukraine’s transit role diminished, so did the number of countries that depended on it for supplies. By 2021, Ukraine was a transit corridor largely for gas going into Slovakia, from where it continued to Austria and Italy. There was a time when Ukraine sent a lot of gas south, to Romania, Bulgaria, Greece, and Turkey, but TurkStream changed that. Even Hungary, the second-largest recipient of gas from Ukraine in 2021 stopped imports in October 2021. 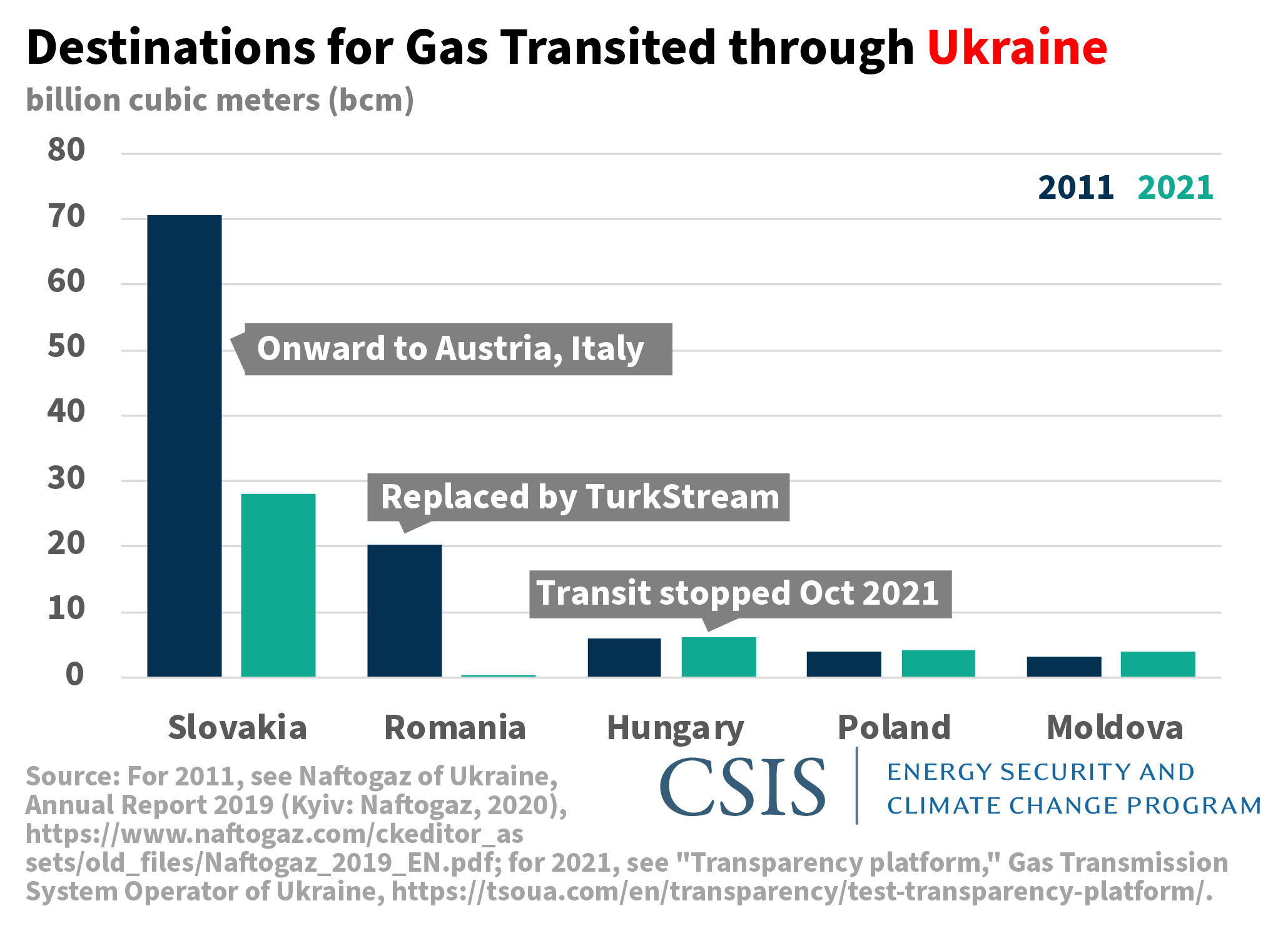 This shift in Ukraine’s role was reflected in the most recently “union-wide simulation of gas supply and infrastructure” conducted by ENTSOG, the organization that coordinates Europe’s national gas transmission system operators (TSOs). It found that the downstream impacts of a cutoff in Ukrainian supplies could be managed assuming a well-functioning market and regional collaboration.

At this point, a physical interruption of gas flows through Ukraine would impact Slovakia, Austria, and Italy, each of which has different options to cope. Italy, given its access to the sea, has the most alternatives. A cut would also hit Poland, which has more alternative options than ever. Moldova would be in a harder position, although its imports come through a different artery; whether gas is cut off would depend on the type and duration of the conflict. Whether these countries can access alternatives will hinge on global market conditions and the amount of gas in storage around the continent.

An interruption in Ukrainian transit would also impact Ukraine itself. Over the years, Ukraine has stopped purchasing gas from Russia directly. Instead, it meets its import needs through backhauling. In the past, this involved shipping gas west and then re-importing it back into the country; this process is now done virtually. According to the Ukrainian gas system operator, 89 percent of Ukraine’s 2021 imports came through virtual backhaul.

This is the backdrop for thinking about the energy security impacts of a conflict in Ukraine. The country used to be the main corridor for delivering Russian gas to Europe; it is no longer that, though it remains significant for certain countries. But Ukraine’s own energy security still hinges on its role as a transit country. Ensuring adequate supplies in the country without such transit will be considerably more difficult. But otherwise, the downstream impacts would be far more localized and narrow.

How this plays out depends on many variables. A conflict in January is not the same as a conflict in April, after winter is over. A weeklong skirmish is different than a multi-month stalemate. Localized fighting might not impact gas flows, whereas all-out war might. Gas infrastructure could be targeted by accident or by intent to gain a military advantage. The damage to infrastructure can be minor or major. These parameters are unknowable at this time.

But some scenarios can be postulated. One option is that gas flows are disrupted because infrastructure is damaged. Or gas could be used as leverage. Russia could cut off gas to pressure Ukraine or Europe. Ukraine could disrupt supplies to rally Europe to its side. Or gas flows could be disrupted without a quick ability to assign blame. All these outcomes are possible. As long as the disruptions are restricted to the Ukraine corridor, the downstream consequences will be limited to the countries mentioned above.

Another set of scenarios would see the energy conflict spread beyond Ukraine. Russia could cut off supplies not just through Ukraine but through other routes. History tells us that energy is a lousy weapon to achieve political goals. But it could still be wielded. In fact, some would argue that Russia is weaponizing gas already, holding back supplies despite record prices in Europe. The reality is a bit more complex. But there is no doubt that Russia has been uniquely unhelpful in addressing the panic that has engulfed the market. Its responsibility is hard to miss.

The conflict could also spread to the Nord Stream 2 pipeline. The German position has not shifted yet, although Nord Stream 2 could be part of Germany’s response. How Germany proceeds is an unknown at this point. Despite the rhetoric in Washington, Germany cannot merely “cancel” Nord Stream 2, since the pipeline is already built. And if there is no immediate conflict in Ukraine, Germany’s position becomes untenable. It must either approve the pipeline’s operation or keep it on hold in case a conflict happens—at that point, the threat loses its deterrent value if Russia concludes that the project is doomed no matter what. The current equilibrium is not stable.

What is clear is that Russia’s ability to influence the market does not depend on Nord Stream 2. In 2021, all that Russia had to do to agitate markets was not refill its storage sites in Europe. With such leverage, it is hard to think that a new pipeline gives Russia some decisive advantage. Russia’s cards are strong no matter how the gas gets to Europe. And no level of diversification could enable Europe to dispense of Russian gas any time soon. This is the reality.

But Germany’s willingness to put Nord Stream 2 on the table signals a broader dissatisfaction with Russia. Russia has only itself to blame. Its conflicting messages over gas supplies have alienated even those who accept Russia’s role in the European energy system. While Russia may not be using energy as an overt weapon, it can hardly claim to be a reliable supplier as it has in the past.

Therein lies a final irony in the European energy chessboard. Europe has built its defenses since the energy crises of 2006 and 2009. It invested billions in infrastructure that allows it to import gas by ship and to move gas around more in the continent. Ukraine’s transit role has shrunk. But the European attitude toward Russia may be changing, partly due to a crass effort by Russia to remind Europe of its dependence on Russian gas. Europe is much better insulated today against a disruption of gas supplies through Ukraine, even if such an interruption would still hurt. But Europe’s tolerance for such dependence, and Russia’s antics, might be dwindling. That is the front to watch as this crisis unfolds.