Can I Stay or Can I Go Now? Longer-term Impacts of Covid-19 on Global Migration

The COVID-19 pandemic will be a history-altering event. But where will it take us? In “On the Horizon,” a new CSIS series, our scholars offer their insights into the fundamental changes we might anticipate for our future social and economic world.


Throughout history, people have moved from one place to another. Sometimes they have moved temporarily in search of food or work, sometimes permanently in search of a better future, sometimes because they were forced to do so by disaster or conflict. Such human mobility has been a core tenet of the unprecedented economic growth of the last 100 years and is critical to our global economy. Today, there are almost 1 billion migrants worldwide. Of these, 272 million have crossed international borders, and recent estimates suggest that three-fourths of these international migrants are of working age (20-64). While making up just 3.4 percent of the global population, migrants contribute an estimated 10 percent to global GDP; they have been the engine of global economic growth over the past century. Disruptions to migration flows could have substantial and multidimensional longer-term economic and social impacts. 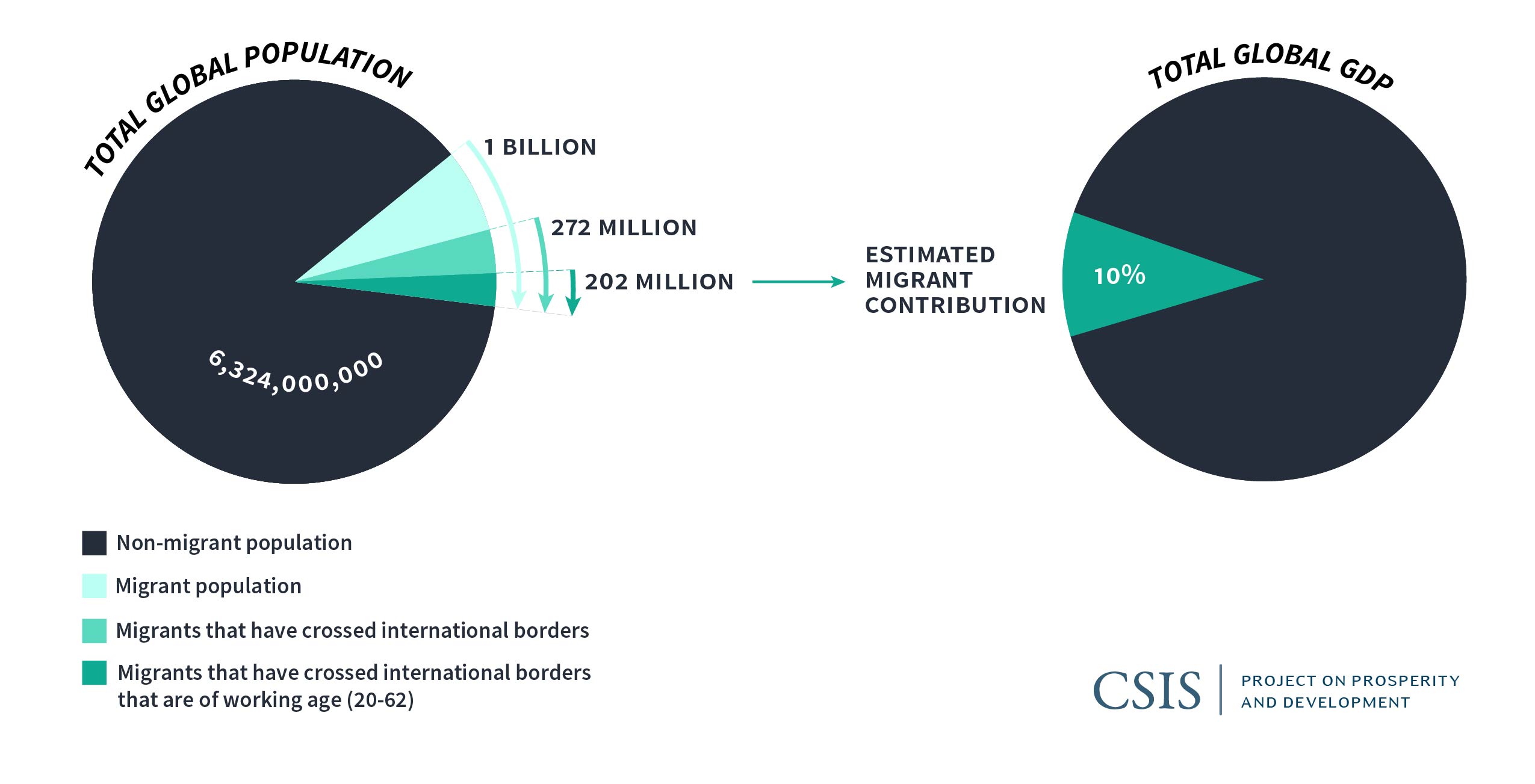 Covid-19 has created the worst of all possible disruptions: an almost complete global halt to human mobility. More people are on lockdown globally (2.6 billion) than were alive during World War II. As is clearly evident by the UN Migration Agency’s daily tracking efforts, cross-border movements have been especially restricted. Those wishing to travel internationally simply cannot do so. There are even increased limitations in domestic movement across state lines in countries like the United States and India.

It is unclear how long these restrictions will last. But even in a best-case scenario whereby the United States “implements highly aggressive national social distancing measures,” the next two to three months will still see extremely limited human mobility. And this scenario does not even take into account what many believe will be coming Covid-19 waves in sub-Saharan Africa, Latin America, and elsewhere, meaning that even the two-to-three-month timeframe could be significantly longer in the developing world.

The short-term impacts of such restrictions are becoming increasingly clear. Unemployment is skyrocketing globally. Inequality is growing, and global poverty could increase for the first time since 1990. The pandemic is disproportionately affecting the health and livelihoods of the most vulnerable. Though much will depend on government responses, the nature of virus mutation, technology, and other drivers envisioned by my CSIS colleagues Steve Morrison and Anna Carroll, it is worth envisioning what some of the longer-term (that is, over one year) impacts might be on global migration. Though there are myriad angles to migration, it is important to think about how disruptions to human mobility and decreased remittance flows could pose serious longer-term challenges to migration and to global economic growth.

Migrants sent an estimated $551 billion home in 2019 in the form of money and goods (also known as remittances). Remittances have a proven positive effect on economic growth. Due to Covid-19, many migrants—especially those originally from developing countries—have lost or are at risk of losing employment while having little if any safety net on which to rely. As economic migrants lose income in the developed world, they will send less money and goods to the developing world.

A majority of international migrants come from the developing world, either moving to another developing country or to a developed country.

As of 2019, the greatest number of migrants originated in India, Mexico, China, Russia, and Syria (in that order). Unsurprisingly, India, China, Mexico, the Philippines, and Egypt (in that order) received the most remittances in 2019. While presumably the Indian, Mexican, and particularly Chinese economies will be negatively affected by Covid-19 and thus could negatively impact global economic growth, it is reasonable to assume that the size, diversity, and overall structure of their economies will allow them to recover over time. Importantly, their respective GDPs are also not significantly dependent on remittance flows.

It is a different story for many developing countries. Remittances make up almost 10 percent of the GDP of the Philippines, a country of over 100 million people. In the small Pacific island nation of Tonga, a significant majority of people born there migrate elsewhere, in turn contributing to almost 40 percent of Tonga’s GDP in the form of remittances.

Though exact figures might not be known for some time, it is clear that Covid-19 is already resulting in many migrants losing jobs and income while abroad. This will, in turn, lead to an inevitable decrease in remittances, which will negatively affect families and communities in the developing world most acutely. Of particular concern are countries where Covid-19 is exacerbating multiple vulnerabilities. Tonga, for example, has relatively high rates of obesity, diabetes, and cardiovascular disease. Of the 74,433 migrants currently abroad, some will lose their livelihoods and be unable to send money back home, meaning that people back home are left to deal with complex health issues and Covid-19 with less support from abroad. Though the global food supply chain will likely remain intact, Covid-19 will also exacerbate food insecurity in places like South Sudan and Yemen. Similarly, those living in refugee, internal displacement, and migrant camps will also have less access to remittances while facing multidimensional challenges, among them extreme population density (see below), lack of basic services (especially health care), disruptions in global supply chains, and the feared redirection of foreign assistance resources away from assisting foreigners. 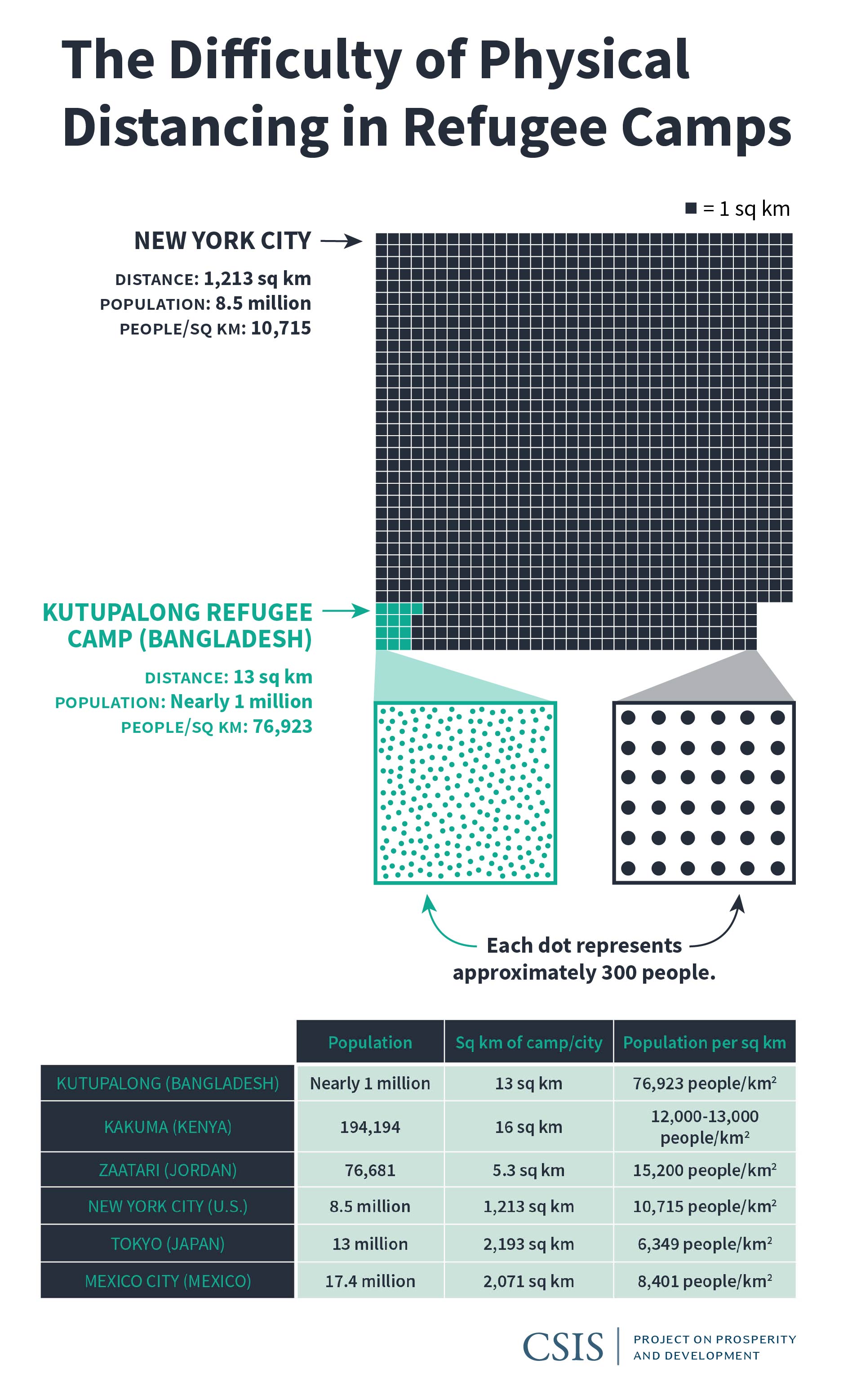 Without income sources abroad to fuel remittances, economic inequalities between developing and developed countries could become more pronounced. For example, in Bangladesh—a country with a GDP per capita of approximately 1 percent of that in Luxembourg—5.5 percent of its overall GDP comes from remittances. The inability of Bangladeshis to move efficiently—or at all—in search of work due to the current crisis will negatively impact its economy. According to the International Labor Organization, the “COVID-19 pandemic now cruelly highlights those inequalities – from catching the virus, to staying alive, to coping with its dramatic economic consequences.”

As migrants lose income and remittances correspondingly decrease, families back home dealing with their own pandemic-related challenges will suffer. Remittances have historically been an important tool to assist people in developing countries during and after disaster strikes. Since Covid-19 is negatively affecting health outcomes and economies everywhere, it is safe to assume that at least some of this typical coping mechanism will not be available.

But the news may not be uniformly bad. For example, remittances infuse foreign currency into an economy that can disincentivize governments from reforming excessive export subsidies to underperforming economic sectors. When remittances drop dramatically, the rapid depletion of foreign exchange reserves (and the associated weakening of its currency’s purchasing power) can push policymakers to reconsider such policies, as was the case right before India’s liberalization in 1991. When most economic migrants in the Middle East fled the Gulf War, India’s biggest source of expatriate remittances dried up and pushed the country into a balance of payment crisis, forcing the Parliament to adopt more liberal, market-oriented economic policies.

There are at least seven longer-term impacts of decreased migration and decreased remittance flows due to Covid-19:


This list of longer-term impacts is not comprehensive nor is each point guaranteed to come to pass. But this much seems clear: the shorter the duration of the pandemic, the more positive the outcomes for migrants—and the global economy—will be. Policymakers have much to think about these days, and understandably these concerns tend to be domestic in nature. However, the lack of human mobility means not only fewer remittances but also real economic risks to countries—like the United States—reliant on migrant labor and brainpower. During these trying times, policymakers should not forget about the people who will be critical to restarting the engine of the global economy post-Covid-19: migrants.

Erol Yayboke is deputy director and senior fellow with the Project on Prosperity and Development at the Center for Strategic and International Studies in Washington D.C.