Can Russia Execute a Gas Pivot to Asia?

Europe’s desire to diversify from Russian natural gas is pushing Russia to look for new markets. Russia only started to supply gas to Asia in 2009, and the European market remains far bigger and far more lucrative. Russia could eventually build a sizable business geared toward Asian markets, but the shift will be neither immediate nor easy, and it will depend critically on foreign partners, including China.

In volume terms, Asia could maybe match Europe one day as a market for Russian gas, but as a source of income and geopolitical heft, Asia will be a second-best alternative. Russia was an early player in the European gas industry and its role grew as the market expanded. Russia comes late to Asian gas, and its resources are too far removed from it. Russia can turn to Asia and, over time, sell sizable gas volumes there. But that business cannot replace what Russia had in Europe. The Asian pivot can only deliver so much.

In 2021, Russia sold around 33 billion cubic meters (bcm) of gas to Asia, compared to a European market that typically imports 160 to 200 bcm from Russia. Two-thirds of the gas that Russia sent to Asia came in the form of liquefied natural gas (LNG): 14 bcm from the Sakhalin-2 project, going to Japan, Korea, Taiwan, and China, and 8.5 bcm from Yamal LNG, serving mostly China, but also Japan, Korea, Taiwan, and India (smaller volumes went to Bangladesh, Indonesia, and Singapore). Russia also delivered 10 bcm to China through the Power of Siberia pipeline, which was launched in late 2019 and will eventually flow 38 bcm a year. 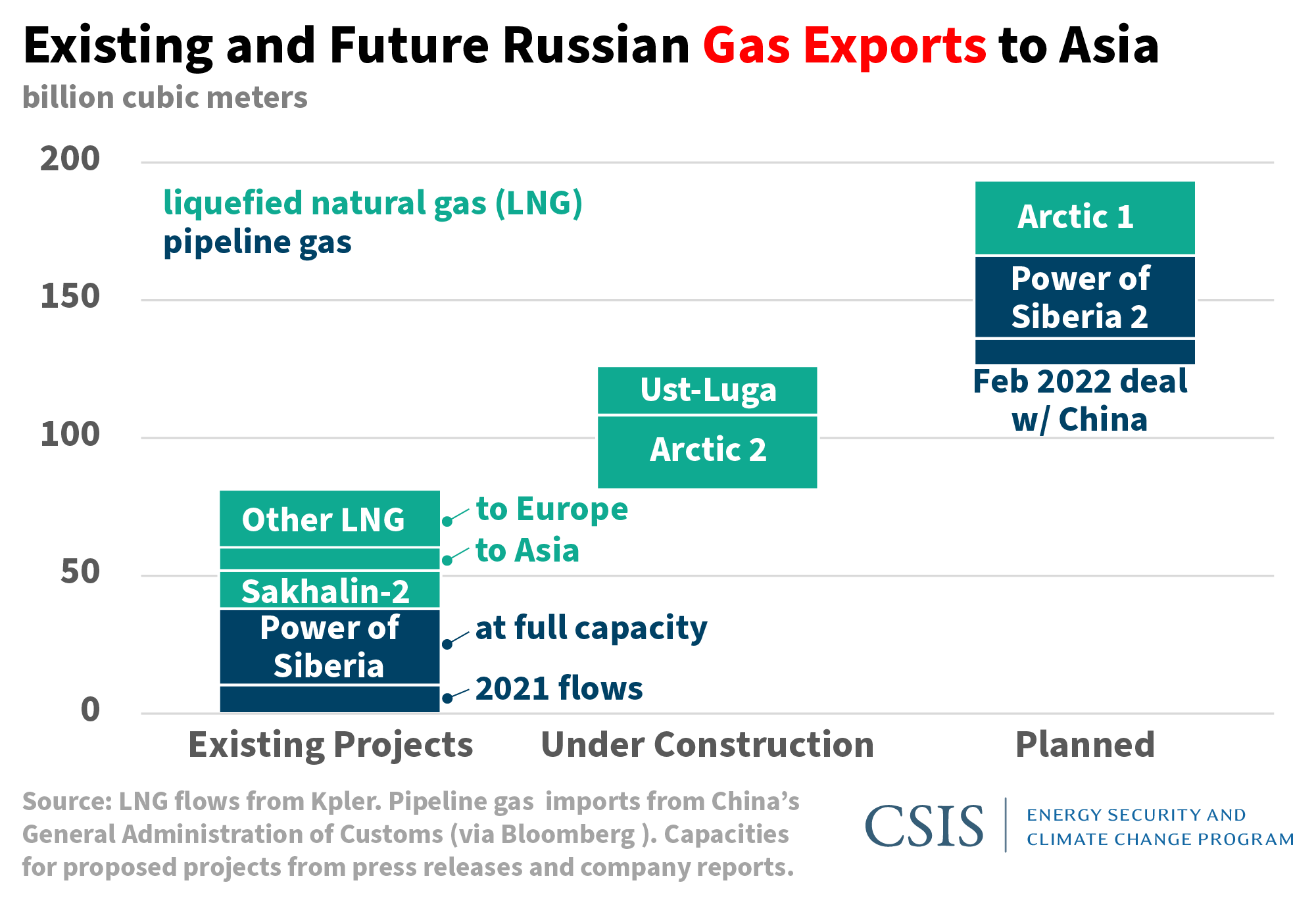 Once the Power of Siberia pipeline reaches its capacity, Russia could be delivering nearly 60 bcm to China (assuming existing LNG flows to Asia remain). Russia also sells around 20 bcm of LNG to Europe. This LNG comes from projects in the north (Yamal) and west (Vysotsk and Portovaya). For the projects in the west, near Saint Petersburg, Europe is the natural market. For the LNG flowing out of the Yamal Peninsula, Europe is a year-round destination, while Asia receives more gas when the northern sea route is navigable. At an added cost, however, all these volumes could end up in Asia. Together, they could help Russia sell around 80 bcm into Asia—all without new projects.

But Russia’s ability to increase its gas sales to Asia further depends on new projects. In the short term, Russia is building the Arctic 2 project, which will double the country’s LNG capacity in the Arctic. This is a project that depends on foreign partners—both as equity partners and financiers, and as providers of key technology and project management expertise. The project is completed in three phases (trains, in industry lingo), with the first being nearly complete, the second less than halfway complete, and the third not constructed yet.

Whether Russia can deliver on this project in full is unclear. Novatek, the sponsor, has developed a local alternative to one of the key technologies (the “Arctic Cascade” process), but the performance was subpar, and Novatek had reverted back to Western technology. The icebreaker vessels that deliver LNG have been built in South Korea, although most vessels for the Arctic 2 project will be built at the Zvezda shipyard in Russia—a first for that shipyard. Finally, the project still depends on foreign financial support and project management expertise, both of which could be disrupted by further sanctions or decisions by companies to disengage from Russia.

The other LNG project under construction—Ust-Luga, or Baltic LNG—broke ground more recently and is less advanced than Arctic 2. Gazprom, the project sponsor, is also less experienced with LNG. (Gazprom participates in the Sakhalin-2 project, but it came into the project late and mostly relied on foreign partners for executing the project.) The Baltic LNG project has been on and off for years, and the company’s commitment and ability to deliver on the project is questionable (the project was already canceled once, in 2008, before being resuscitated years later).

There are other LNG projects on the table, but none have started construction yet. Novatek intends to build a third project in the Arctic (somewhat confusingly called Arctic 1). It is unclear whether Novatek, or any foreign partners, would advance Arctic 1 until the fate of Arctic 2 becomes clearer. In the Far East, Rosneft has been advancing an LNG project, most recently in partnership with ExxonMobil, which pulled out of the project as part of its broader withdrawal from Russia following the outbreak of the war, delivering a likely fatal blow to this project in its current iteration. Other LNG projects that have been advanced over the years seem even less likely today.

In February 2022, Gazprom signed an agreement with the China National Petroleum Corporation to deliver an additional 10 bcm to China through the Far East. None of the details were made public—when deliveries will start, where the gas will come from, what route will deliver the gas, and so on. There is some gas in the area: in Sakhalin-1, but not under the control of Gazprom, and in Sakhalin-3, under the control of Gazprom subsidiary Gazprom Neft. Neither supply option is simple.

The gas in Sakhalin-1 has long struggled to find an outlet. Rosneft, the Russian state company that is part of the project, has wanted to sell this gas to China for years, but it never managed to close the deal (or to bypass the monopoly on exports of pipeline gas held by Gazprom). The gas in Sakhalin-3 has also faced challenges. The main field was targeted by Western sanctions in 2015. Since then, the Russians have struggled with the technical challenges involved in producing the gas, and whether they can now is unknown. But the gas in Sakhalin-3 is the most logical source for this 10 bcm contract. It is just not obvious that this gas will be available any time soon.

The most significant project is a second Power of Siberia pipeline to China. Like the first pipeline, variations of this proposal have been discussed for years without much progress. The main idea is to link the fields in West Siberia, which now supply Europe, with Asia. Power of Siberia 2 would allow it to arbitrage between European and Asian markets—it is the most coveted prize for Russian energy strategists.

The problem, however, is that China holds all the cards in the negotiations. And like the first Power of Siberia line, China will drive a hard bargain. What is unknowable at this point is whether China is ready to make a deal. Russia is likely to offer very attractive terms—if nothing else, due to its desperation. But will China accept them? Will they be tempted by the price, or will they think twice about expanding their dependence on Russia at this moment? How the Chinese will answer these questions is hard to know.

Russia typically sells 160 to 200 bcm to Europe on an annual basis. With existing infrastructure, Russia could deliver 80 bcm to Asia, split between pipeline gas and LNG. Some upside to this figure is possible. NOVATEK could complete the first train of Arctic 2, and maybe, over time, the other two trains. Russia could expand its pipeline exports to China, although the big prize, Power of Siberia 2, faces uncertain prospects. Russia is unlikely to sell as much gas to Asia as it does to Europe now. But it could close the gap; it is possible to imagine scenarios where Russia sells 100 to 120 bcm to Asia by 2030. This would be a remarkable accomplishment given where Russia was a decade ago.

But Russia’s business in the East is different than its business in the West. To secure a contract with China, Russia had to offer a bargain deal: China pays far less for Russian gas than Europe does. It even pays less to Russia than to central Asian suppliers. To develop its LNG business, moreover, Russia had to offer a number of tax breaks, so the Russian treasury does not earn as much from LNG as it does from pipeline gas. China has also been less willing to let Gazprom build any kind of business within China—unlike in Europe, where Gazprom has managed to set up a number of joint ventures over time.

More importantly, Russia’s market share in Asia will remain small. China, Japan, Korea, and Taiwan each got less than 10 percent of its LNG from Russia in 2021. Even when Power of Siberia reaches its full capacity, China might import less than 10 percent of its gas needs from Russia (Chinese demand in 2021 was roughly 367 bcm and is growing rapidly). Russia will never have market power in Asia, certainly not compared to its dominant position in the European market. The gas pivot from Europe to Asia will work, but it is not a one-to-one shift by any means.

Nikos Tsafos is the James R. Schlesinger Chair in Energy and Geopolitics at the Energy Security and Climate Change Program at the Center for Strategic and International Studies in Washington, D.C.