Can Sanctions on Venezuela Be Improved?

Amid tumbling oil prices, the ongoing Covid-19 pandemic, and shipments of Iranian gasoline to Venezuelan consumers, U.S. sanctions on Venezuela are facing increasing scrutiny. Critics argue that sanctions are contributing to the country’s economic collapse, thereby exacerbating the humanitarian crisis and increasing suffering among Venezuelans. At the same time, despite specific victories, sanctions have failed to deliver a political transition, and the power struggle between Juan Guaidó and Nicolás Maduro endures with no end in sight. This underscores the limitations of sanctions as a foreign policy tool and calls into question their role within the U.S. maximum pressure campaign on the Maduro regime.

The CSIS Future of Venezuela Initiative hosted a virtual roundtable discussion with experts and policymakers to examine the benefits and drawbacks of the current sanctions program and what sanctions have achieved so far. This piece summarizes the most significant findings and incorporates desk research and interviews.

While the sanctions program can, and should, be improved, the authors argue that lifting sanctions would be counterproductive and is not likely to improve humanitarian and economic conditions for Venezuelans at this time. Indeed, the greatest sanction on the Venezuelan people is the Maduro regime, which continues to plunder the country’s natural resources, harbor criminal activity, and violate human rights with impunity.

The Drawbacks of Sanctions

In evaluating and measuring the drawbacks of sanctions, policymakers should be careful not to give oxygen to the rhetoric used by the Maduro regime—namely, that the economic crisis was caused by sanctions. Though sanctions are likely affecting Venezuelans, the economic and humanitarian crises are rooted in a system that mismanages resources, promotes corruption, and implements unsound fiscal policies that have reduced the country’s productive capacity and made it acutely vulnerable to low oil prices.

At a more granular level, sanctions have increased transaction costs and slowed down the work of Venezuelan organizations, including both the private sector and humanitarian aid organizations, whose bank accounts and transactions are frequently blocked by U.S. banks despite the fact that Office of Foreign Assets Control has instituted a delicate architecture of licenses and exemptions. Many of these organizations lack the resources and technical capacity to troubleshoot these issues with over-compliant financial institutions. At the same time, as sanctions complicate foreign business operations in the country, Venezuelans’ daily lives are being disrupted. Recently, for example, AT&T shut down its DirecTV subscription access in the country, leaving millions of Venezuelans without access to foreign television channels.

On a broader level, sanctions have contributed to lower socioeconomic indicators insofar as they are one of multiple factors that caused Venezuela’s oil production, and thereby its export revenues, to decline since 2017. Sanctions are also making it harder for the regime to swap crude for gasoline. Since the country is unable to refine its own gasoline, these swaps had previously served to satiate demand. Without the swaps, Venezuela’s fuel shortages have become acute and spread throughout the country, exacerbating the humanitarian crisis by making it difficult to transport food and provide humanitarian assistance.

The fuel shortages evolved into a geopolitical quandary in late May, when Iran sent a five-tanker flotilla to Venezuela bearing enough gasoline to tide the country over for a few weeks. That flotilla was the first of many, according to both governments, and Maduro recently announced he would visit Tehran to sign energy cooperation agreements. In response, the United States is considering sanctioning up to 50 oil and fuel tankers.

But Sanctions Should Not Be Lifted Yet

The Treasury Department should continue to monitor and evaluate the effects of sanctions on Venezuela. But despite their flaws, unless the Maduro regime agrees to a democratic transition, sanctions should not be lifted at this stage. To do so would exacerbate the suffering of the Venezuelan people by prolonging Maduro’s grip on power while undermining the efforts of the international community to re-establish democracy and prosperity in Venezuela.

The Maduro regime continues to downplay the humanitarian crisis in Venezuela, and there is no compelling evidence to suggest this will change significantly amid Covid-19. On the contrary, despite signing an agreement to address Covid-19 with the interim government led by Guaidó, the regime continues to systematically and deliberately block the work of vital humanitarian organizations, such as the World Food Programme, while jailing political dissidents, censoring journalists, and looting natural resources. If sanctions were lifted, there is no reason to believe that the regime—which has a history of mismanaging, politicizing, and neglecting welfare programs—would be willing, or even able, to alleviate the humanitarian crisis, the bulk of which began long before sanctions were imposed.

Finally, it is important to recognize that, while Maduro remains in power, sanctions have effectively constrained the regime. In each negotiation effort, lifting sanctions has been the top priority for the Maduro regime, giving the opposition more leverage. And, by extending sanctions to Rosneft’s trading units, the United States has successfully cut off one of the Maduro regime’s most important lifelines. Maduro and his cronies have also partially been cut off from U.S. and European financial systems as a result of individual sanctions, and visa sanctions have left these officials diplomatically isolated. All of these effects may be deterring other officials from engaging in corrupt activities. That said, corrupt Venezuelans linked to the Maduro regime continue to enjoy impunity in many countries in the world, including in the United States. Finally, sanctions have played a vital role in shielding Venezuela’s foreign assets—such as U.S.-based CITGO Petroleum Corporation—from creditors. 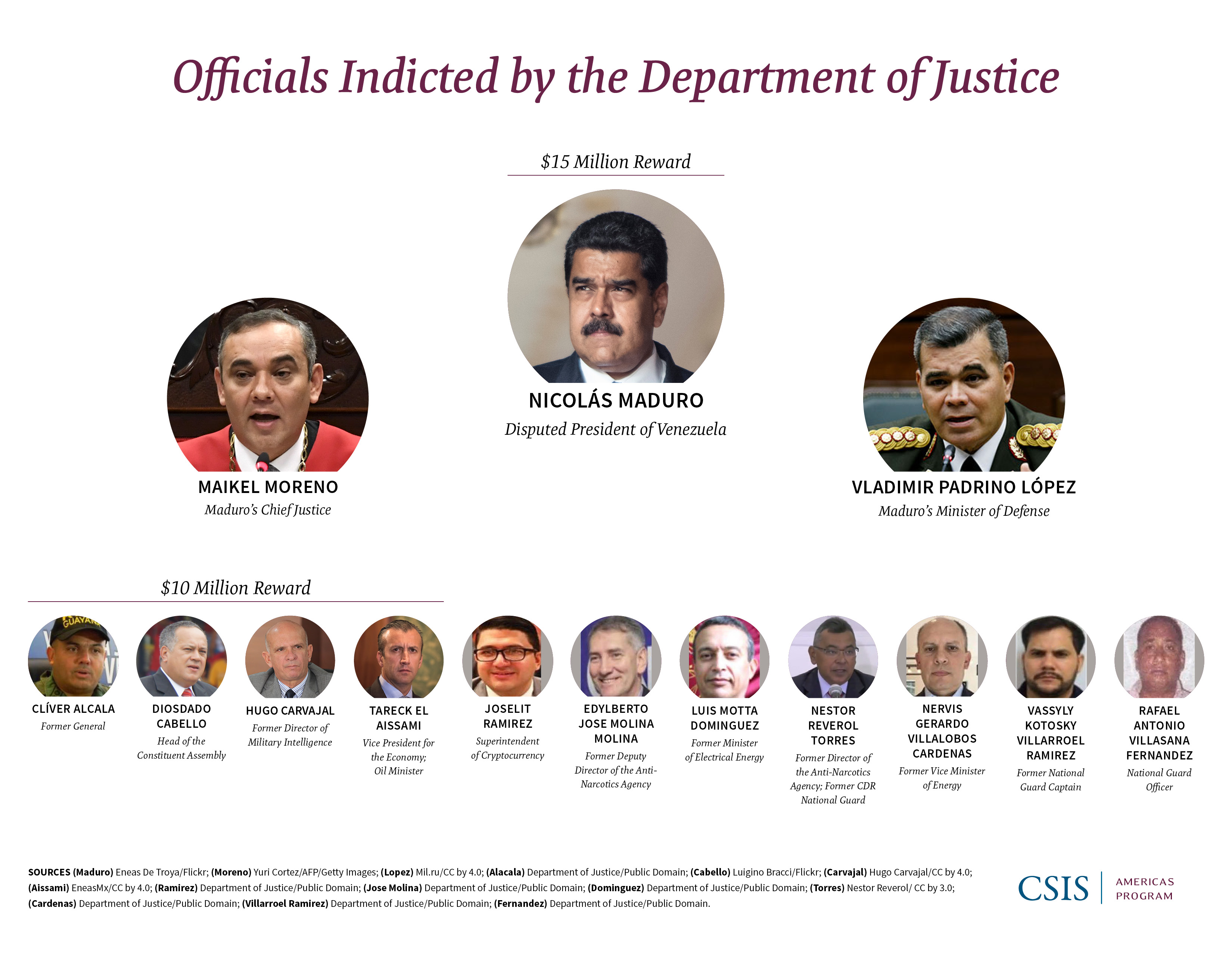 Sanctions have never incited a change in government, and there is no reason to believe that the Venezuelan case is any different. Rather, they are one tool within a broader foreign policy toolkit. This toolkit includes actions from the State Department, including the recent Democratic Transition Framework, which laid out the steps the regime and military officials would need to take in order for sanctions to be lifted. It also includes steps by the Department of Justice, such as the indictments that were unveiled in March against 14 current and former regime officials.

As the situation in Venezuela evolves, sanctions must be monitored, evaluated, and, if necessary, adjusted to minimize collateral damage and facilitate humanitarian work. But lifting sanctions at this time would eliminate the opposition’s leverage and undermine diplomatic and judicial efforts to pressure the Maduro regime.