The shale gas revolution has not been kind to Canada. Exports to the United States, Canada’s main market, started to fall in the late 2000s, and soon enough, the country started to rely more on imports from the United States. Canadian producers tried to shift their focus to Asia and proposed to build several facilities to export liquefied natural gas (LNG). A decade later, none of these facilities has been built. Meanwhile, two export facilities are up and running in the United States and four more are under construction. By all appearances, Canada seems to have lost the LNG battle.

Yet a possible reversal is visible. Canadian gas production is growing again, despite low prices. Exports to the United States have rebounded in the past three years. And the government of British Columbia just announced a new gas framework to support the LNG industry. Canada’s LNG industry continues to face serious challenges, but Canada is now far better positioned to compete in the global market. It would be a mistake to assume that Canada has missed the proverbial “window of opportunity.”

In the early 2000s, Canadian gas production looked similar to that in the United States: falling production and a forecasted reliance on imports. But soon enough the fate of the two countries diverged. In the United States, the growth in shale gas led to output growing in 2006. By 2012, production had risen by a third, and the country started to build its first export facility in the Gulf Coast. In Canada, by contrast, the decline was steady: from 2001 to 2012, output fell by 20 percent. The two countries looked very different.

Canada’s worsening position was evident in the shifting trade relationship. Starting in the 1990s, more than half of Canada’s gas production went to the United States. At its peak, in 2002, Canada exported almost 10 billion cubic feet a day (bcf/d), accounting for a sixth of U.S. consumption. But Canada’s net exports almost halved between 2002 and 2014. East of the Great Lakes, Canada became a net gas importer in 2010. Canadian gas producers were clearly struggling to compete.

By 2013, however, Canada’s gas production had stopped falling. Within five years, output had risen by 12 percent. Alberta, the heartland of Canada’s oil and gas industry, saw production grow in 2014; relative to 2013, output was up 10 percent in 2017. In British Columbia, production started to increase earlier; relative to 2009, the last year before the boom in production, output has risen by 66 percent. In absolute terms these increases are still minor relative to the United States, but they signaled a change in direction. 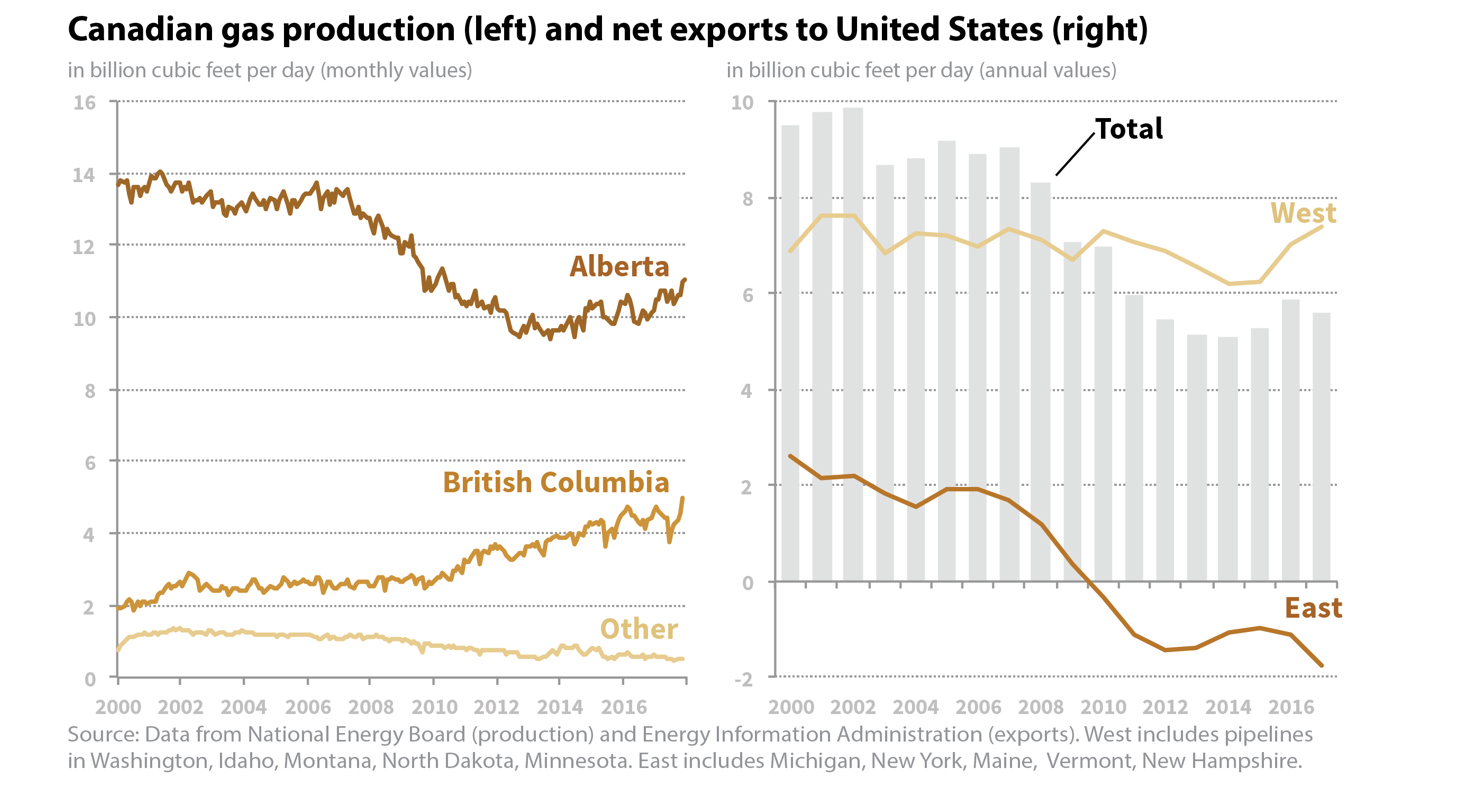 This growth came through the same efforts as across the border: deeper wells, lower operating costs, faster drilling cycles, and other operational efficiencies in exploiting shale gas resources. Canada also expanded its production of condensate and natural gas liquids, which further supported output. Canada’s trade position soon improved: while Canada is still and will likely remain a net importer in the East, it has increased exports in the West. In fact, net exports in the West were just 4 percent below their 2002 peak.

Production grew despite low prices. Due to its distance from the main population centers in the East, prices in Western Canada have historically traded at a discount to Henry Hub. The discount at AECO C, the main hub in Western Canada, has been around 10 to 20 percent, but in 2016 and 2017, the gap widened to almost 40 percent (aided by Henry Hub being high relative to other U.S. hubs). Canadian producers protected themselves somewhat through hedging, so they did not suffer the full decline in prices. But the ability to grow production in such an adverse price environment signals the rising competitiveness of Canada’s gas. 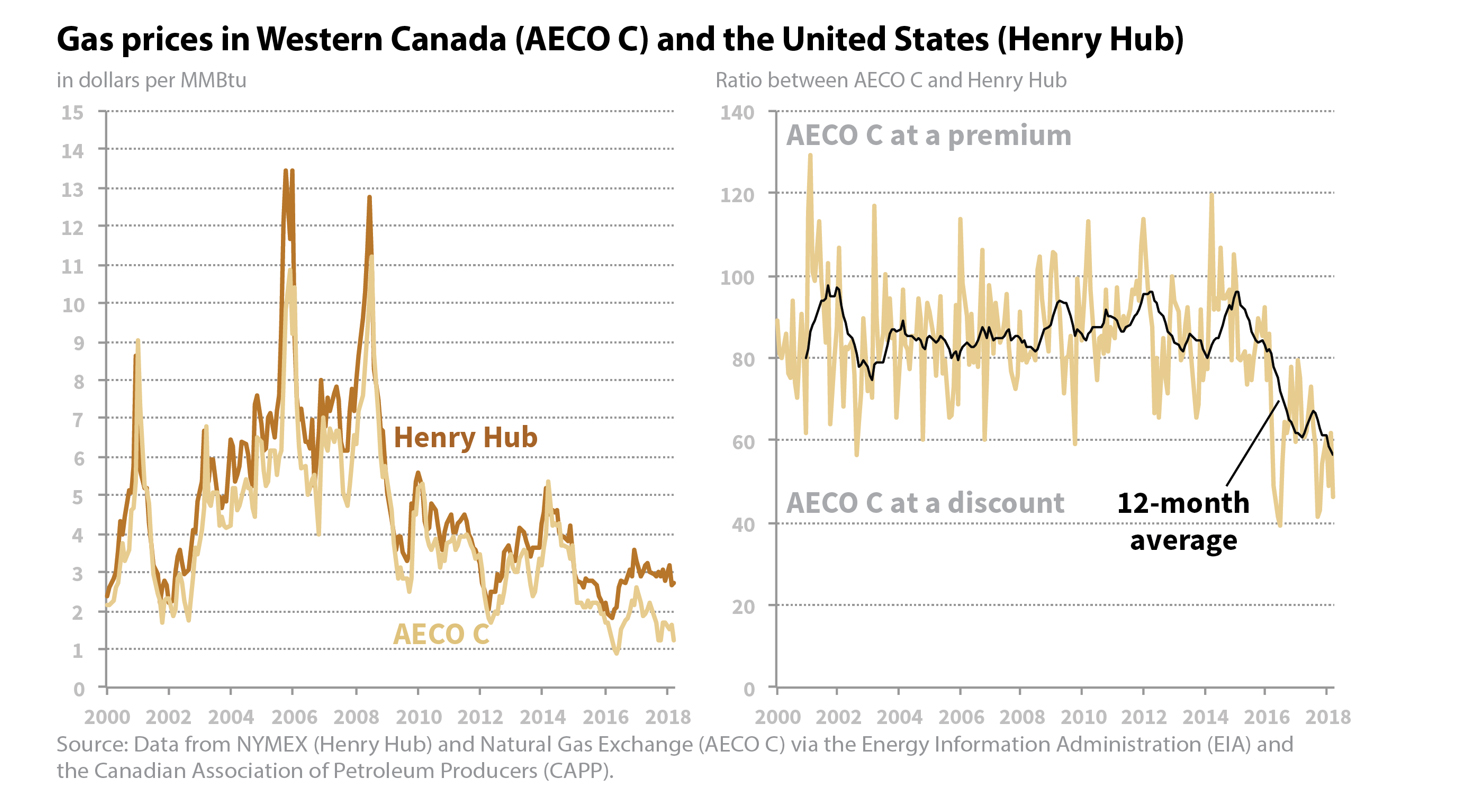 Is there demand for this gas? Domestic consumption was flat in the 2000s, but it has since grown. Unlike the United States, where over 70 percent of demand growth in the last decade came from electricity, the growth in Canada has come largely from industry, especially oil sands, where a doubling in output led to a 250 percent rise in gas demand between 2006 and 2016. In the power sector, gas has made fewer inroads, in part because hydroelectricity has maintained its 60-plus percent market share, and in part because renewables have shrunk the dependence on fossil fuels to begin with. Plans to phase out coal generation by 2030 could boost gas demand eventually—although renewables could cap the gains for gas (Canada’s goal is to generate 90 percent of its electricity from “non-emitting” sources by 2030—so gas could stay close to its current 10 percent). For now, demand growth will hinge largely on oil sands production. 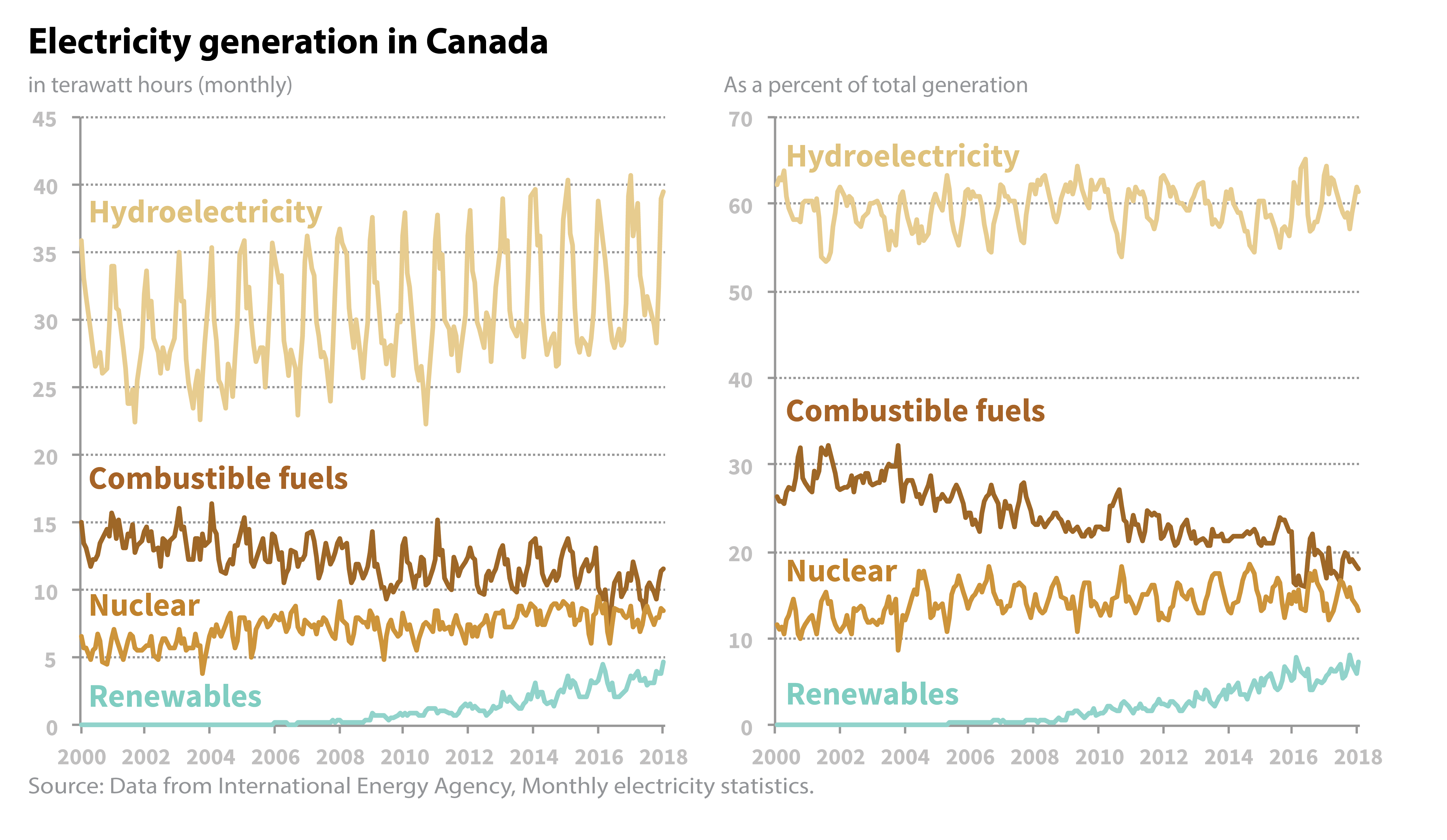 Hence the need for LNG exports. Since 2011, the National Energy Board has issued 35 export licenses that could theoretically export over 55 bcf/d—more than three-and-a-half times Canada’s production in 2017. But no project has started construction yet—blame a mix of challenging economics and a tough regulatory environment that has made permitting difficult.

It was in response to this disappointment that the British Columbia government offered incentives in March 2018 to the Shell-led LNG Canada project . The proposal covers four areas and is contingent on the project taking a final investment decision in 2018: (a) relief from the provincial sales tax during construction, replacing up-front payments with an annual contribution levied during operations; (b) a lower carbon tax, similar to that for all other industries, provided that the project remains within a set carbon-intensity target; (c) electricity rates at the average for all industry, rather than an LNG-specific price; and (d) the elimination of an LNG-specific income tax introduced by the previous provincial government.

These initiatives could collectively reduce the project’s midstream cost of $6 per million British Thermal Units (MMBtu) by $0.25 per MMBtu. On their own, they are unlikely to tip the scales. But Canada has other advantages. It can produce gas at a low price. It can bypass the Panama Canal in delivering gas to Asia. Shipping costs to Asia are lower than they are from the Gulf Coast. And Canada offers diversification to an industry that is always keen on it; it has the stability of North America without the (currently) complex politics of the United States, which could even entangle current projects with broader trade and geopolitical considerations. That does not make Canadian LNG less risky necessary—just different, which is often what the industry seeks.

None of this should obscure the remaining challenges. The commercial case is still marginal—the economics are basically a toss-up. Permitting for gas pipelines and liquefaction projects is less contentious than for oil, but no pipeline projects for LNG have secured agreements from all the First Nations (the predominantly indigenous peoples south of the Arctic Circle) along their routes. Higher carbon taxes in the future could raise costs further. And while LNG has political support currently, there is always uncertainty in a country that oscillates between the recognition that hydrocarbons are both necessary and plentiful in Canada and the awareness that a transition to a low-carbon future requires that some of these hydrocarbons stay in the ground.

How these contradictions will get resolved in hard to know; so is whether the complex calculation between risk and reward will lead the project developers to green light LNG projects. But Canada is in a better position to compete than before. Canadian gas took many punches during the opening rounds of the shale gas revolution. It has now recovered and is ready to fight back.

Nikos Tsafos is a senior associate with the Energy and National Security Program at the Center for Strategic and International Studies in Washington, D.C.