This study is available on the CSIS web site at: https://bit.ly/2K7pO9X. This study is a major expansion and revision of a previous Burke Chair study that examines the changes taking place in Chinese nuclear delivery needs and their impact on China's stockpiles of nuclear weapons and weapons designs. It drew on a wide range of official open-source reporting, as well as a range of outside sources, including the Federation of American Scientists, Arms Control Association, IISS, SIPRI and analysts like Hans M. Kristensen and Robert Norris to examine these developments.

The original study argued that a focus on China's expanding global influence, conventional forces, missile forces, emerging ASAT and cyber capabilities – and role in the South China Sea – had led much of the analysis of Chinese military developments to ignore the key uncertainties surrounding its stockpile of nuclear weapons, and the fact that China is developing all the elements of a far more advanced strategic nuclear Triad – along with improved theater delivery system and missile defenses.

It concluded that this lack of attention to the fundamental changes taking place in China's nuclear forces had several explanations. They were partly the result of the fact that the other symbols of China's emergence as superpower – like the situation in the South China Sea – were far more visible and seen as far more urgent. They were partly the result of the fact that China was slow to expand its nuclear missile forces and create a real Triad. And, partly a result of the fact that past estimates of its total holdings of nuclear weapons were so low – roughly at the level of British and French forces – and far below the levels held by the United States and Russia.

The study now indicates how China's emerging nuclear forces may be driven by the major changes that are taking place in U.S. and Russian nuclear forces. It shows that the period of comparatively low nuclear tension between the U.S. and Russia that occurred after 1992 began to end in 2014. Since then, both countries have gradually moved away from mutual efforts to reduce nuclear weapons and forces. Both the U.S. and Russia have announced major nuclear weapons and delivery system modernization programs that impact every element of their triads of ICBMs, SLBM, and air-delivered weapons – as well as the ability to use lower-yield nuclear weapons against theater military targets.

When the recent developments in U.S. and Russian nuclear forces are compared to recent official U.S. reporting on China's nuclear delivery systems, they indicate that what used to be a U.S-Russian strategic and theater nuclear arms race is becoming a contest between three superpowers and not just two. Over the next decade, the emergence of far more capable Chinese nuclear forces will be driven by the changes in U.S. and Russian forces, and fundamentally reshape the nuclear balance, arms control, and the risks of actual nuclear warfare between three competing nuclear superpowers

These ongoing changes in China's nuclear capabilities help explain why the new U.S. national security and defense strategies, announced in 2017 and 2018, acknowledged the growing importance of China’s nuclear forces. The U.S. Nuclear Posture Review issued in early 2018 also focused on the emerging Chinese threat. Similarly, they explain why the latest threat reports by the Director of National Intelligence and the Director of DIA also highlighted the broad trends in Chinese nuclear developments.

The latest Department of Defense report on Chinese military power provides a great deal of detail on the developments in Chinese delivery systems – although it does so in a wide-range of different places in the report and does not address changes in China's nuclear weapons stockpile and design of its nuclear weapons. It makes it clear that China is completing the development of new ICBMs, SSBN and SLBMs, and bombers that will give it all the elements of a Triad to make it directly competitive with that of the U.S. and Russian forces, as well as the potential to create far more capable tactical and theater nuclear forces and missile defenses.

Some of these Chinese systems are already being deployed. All seem likely to enter service in significant numbers during the coming decade – a decade where China may become a peer competitor in conventional forces to the U.S. in the Pacific, outpace Russia's conventional military forces, and emerge as a true economic superpower.

At the same time, the report shows that there are still serious gaps in open source reporting on Chinese nuclear forces. As has just been noted, far more attention is paid to China's delivery systems than to its holding of nuclear weapons. The report also shows that public estimates that indicate China only has a low stockpile of nuclear weapons have always been uncertain, and current estimates are based largely on a limited amount of now dated open-source reporting by the U.S. intelligence community. These estimates have never been fully explained and defined, and many provide only most limited detail.

The open-source material that does compare delivery systems also still has serious limits. Most such reporting focuses only on the number and types of Chinese, U.S. and Russian strategic delivery systems – not their nuclear armament, overall technical performance, and probable use in warfare. Such reporting does not clearly identify the Chinese, U.S. and Russian theater and tactical systems that may use nuclear weapons.

Similarly, almost all open-source material on Chinese strategy only addresses China's official statements about nuclear doctrine and strategy, and not how China's probable actual warfighting needs and capabilities will be driven by the changes taking place in U.S. and Russian nuclear forces.

Finally, most open source material focuses only on China and not on net assessments of the changing balance of Chinese, U.S., and Russian forces and their war fighting capabilities. The reporting on Chinese military forces by the Office of the U.S. Secretary of Defense cited in the study does show that China is already emerging as a far more serious nuclear weapons power than in the past and is improving the design of many of its nuclear delivery systems in ways that will make them competitive with U.S. and Russia systems.

However, open-source reporting does not provide any picture of how the nuclear balance is likely to change over time. It does not attempt to assess how much of a build-up will take place in Chinese nuclear weapons and delivery systems, what new warfighting and deterrent capabilities and weapons China will acquire, how China's nuclear posture and strategy will evolve, and whether China will seek a nuclear posture closer to parity with the United States and Russia. It does not compare probable vulnerability to counter force attacks, the need for launch on warning or under attack, or the impact of missile defense and other technical developments on "assured destruction."

The U.S. now needs to fully reassess Chinese nuclear forces as the forces of a future peer competitor – both for military and arms control purposes. It also needs to address the evolving U.S.-Chinese-Russian nuclear balance – as well as the impact of China's changing capabilities on theater warfare. The U.S. is entering an era when it must give the same priority to deterring China's nuclear forces as to deterring Russia's, and when U.S. arms control efforts must break out of their current focus on U.S.-Russian nuclear forces and address those of China as well. 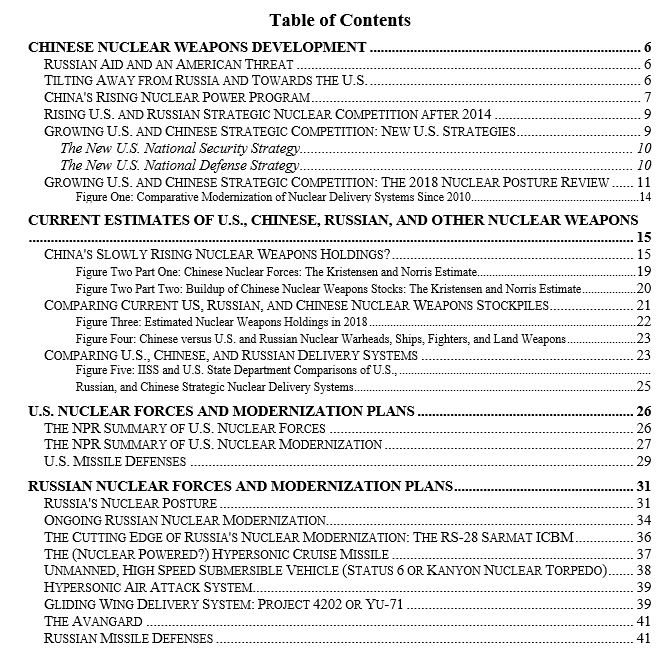 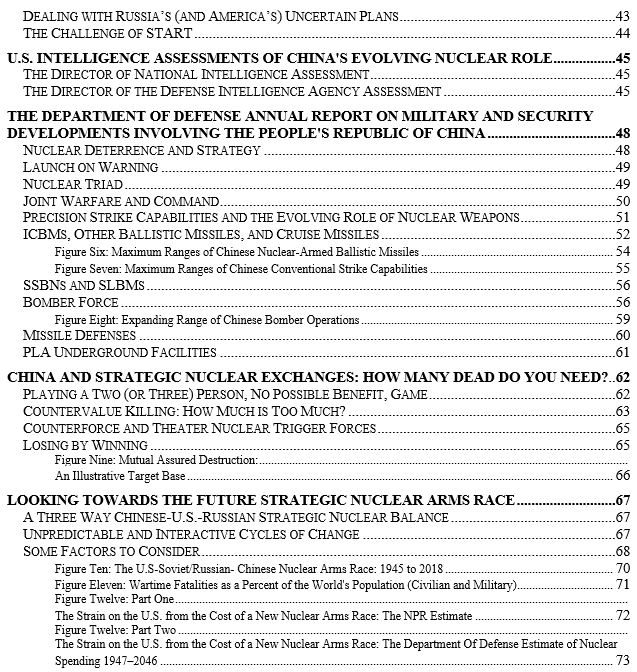