Competition in space is not a new phenomenon. The Space Race between the Soviet Union and United States was one of the defining aspects of the Cold War era. While astronauts are no longer national celebrities and media coverage has greatly diminished, competition in space remains fierce. The United States, China, Russia, Europe, and numerous others all seek to use outer space in a way that best forwards national interest.

A new report by the CSIS Burke Chair in Strategy provides a detailed analysis of these forces and capabilities, and is available on the CSIS website at https://csis-website-prod.s3.amazonaws.com/s3fs-public/publication/160819_Chinese_Space_Strategy_Developments.pdf.

Developing more advanced programs is a key aspect of China’s military modernization efforts. Any assessment of China’s goals and program in space must be considered within the broader framework of its other substantial military reforms which all represent a move towards fighting modern “informationized” wars. “Informatization” has been doctrinally enshrined by the PLA since 1993 and arose from PLA strategists after observing what they believed to be paradigm shifting success of U.S. forces during the 1991 Gulf War.

Indeed, it has already become a major area of competition between China and the U.S. While outer space has many peaceful uses, the continued competition in space between the United States and China adds a new dimension to their de facto arms race. In fact, some high-level military officials on both sides have stated that the militarization of space is inevitable.

It is also a competition with many uncertainties and risks of further escalation. The relationship between the Soviet Union and the United States during the Cold War Space Race may have been more unstable, but current competition between the U.S. and China has broader military and civil implications. Global space infrastructure has been consistently built up over a long period of time, and substantial destruction would not be quickly repaired. Both the civilian and military world rely substantially more on space assets than during the Cold War. The debris created by even minimal kinetic space conflict has the potential to be devastating—not only for military capabilities like ISR, missile guidance, and operational communication—but also for staples of modern daily life like telecommunications, television, weather tracking, the Internet, GPS, and scientific research.

Additionally, the impact of space militarization and warfare remain a strategic question mark. While space competition is still often seen in terms of nuclear deterrence and strategic stability, space capabilities have gained such outsized importance to modern militaries, that a successful first strike in space is likely to disproportionately favor the weaker party, particularly if it comes without warning. Furthermore, a first strike could severely inhibit the attacked party’s ability to react to any form of asymmetric, conventional, or nuclear attack.

In the case of nuclear forces, deterrence is not the sole reason for the avoidance of nuclear warfighting, but it is a critical one. As long as a war in space can affect the outcome of a major nuclear exchange, and the space capabilities of each side do not have a matching level of deterrence, conflict becomes more likely. Moreover, the lack of an accepted code of international law regarding space conduct further fuels uncertainty for states involved in spacefaring.

As a result, finding ways to mitigate the advantages of a first strike in space and maintain the ability to respond have become key tenets of 21st century deterrence and strategic stability. Many of the future aspects of space competition, conflict, and warfare remain uncertain. However, China has made developing an advanced space program a key priority and space capabilities are a key part of the strategy and function of all branches of the PLA. Consequently, analyzing the organization and capabilities of China’s space program, and seeking to assess Chinese motivations and strategy, have become critical aspects to understanding and assessing China’s military. 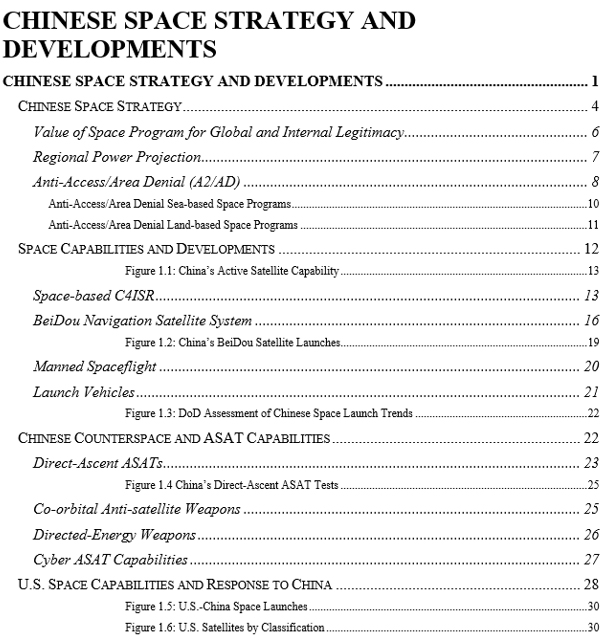