China’s “Belt and Road” Initiative Must Become a Strategy

On May 14, President Xi Jinping of China will welcome 28 world leaders to Beijing to discuss the most ambitious and least understood initiative in global affairs: the Belt and Road. The effort is bold and has been compared to a traditional Chinese painting made with broad brush strokes. Through new overland and maritime connections, it aims to put China squarely at the center of global economic affairs. Like a painting of the same style, it also begins to lose focus when viewed up close, raising questions about its drivers and ultimate implications.

The Belt and Road is a masterpiece hanging in today’s global affairs gallery. Stagnation has been a watchword for the global economy since 2008, but it also partially describes the foreign policy realm. Lackluster growth, political cycles, and geopolitical crises have relegated states to postures that are more reactive than proactive and, in many cases, more focused internally than externally. What President George H.W. Bush once called "the vision thing” has never been easy, but with lower growth, executing big ideas has only become more difficult.

In contrast, the Belt and Road is the most ambitious geoeconomic vision in recent history. Spanning an estimated 65 countries, it can claim to cover roughly 70 percent of the world’s population. It could include Chinese investments approaching $4 trillion, of which nearly $900 billion in deals have been announced. It intends to strengthen hard infrastructure with new roads and railways, soft infrastructure with trade and transportation agreements, and even cultural ties with university scholarships and other people-to-people exchanges. In all these ways, when much of the West is looking inward, China is connecting with the world. 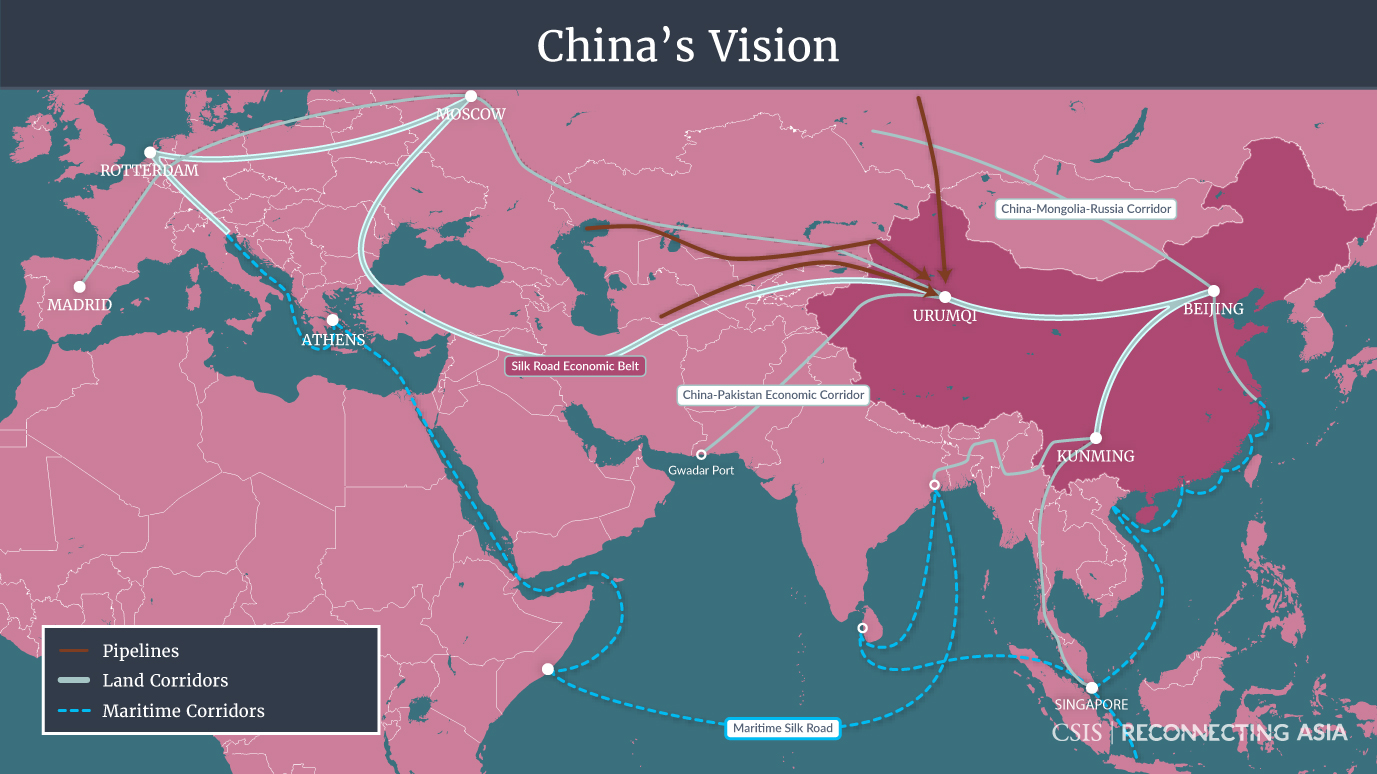 But is this vision achievable? Tellingly, China has issued guidance on English equivalents for describing the Belt and Road. These instructions specify that it should be called an “initiative” and explicitly reject the term “strategy.” An initiative has the benefit of being viewed as less threatening, more open ended, and more inclusive than a strategy. But it also lacks the focus, coherence, and substance of a real strategy. The distinction between initiative and strategy is more than simple semantics. It captures the central challenge the Belt and Road faces.

Since its birth in 2013, the Belt and Road has taken on a growing list of objectives. One official document outlines five major goals: policy coordination, facilities connectivity, unimpeded trade, financial integration, and people-to-people bonds. In theory, each of these is a worthwhile objective. They all relate to connectivity and, in many situations, could be mutually beneficial and reinforcing. But they can also conflict. New trade and financial connections create winners and losers, and adjustment costs can impact people-to-people bonds. A Belt and Road strategy would include guidance for making trade-offs between goals.

There is also a gap between these overarching goals and the smaller issues that Belt and Road statements often discuss. A single sentence in the same document, for example, lists 16 areas for cooperation. It is unclear how deeper cooperation on “ocean engineering technology,” to mention one of those areas, fits with the Belt and Road’s broader vision. Desired outcomes are not specified. Is the goal to invent better ocean engineering technology, restrict or expand its use, or something else? This is the space that good strategy fills, explicitly connecting ends and means.

As an open-ended framework, the Belt and Road has wide support, but its power as a vehicle for regional integration is unclear. In some respects, it is a new banner for existing bilateral efforts. For example, China is aiming to complete trade agreements with 40 percent of Belt and Road participants by the end of 2017. But Asia is already a sea of bilateral trade deals. Many companies lack the capacity to navigate this maze of rules, and consequently, utilization rates are very low. Similarly, China has signed 130 transportation agreements. Some of these efforts could eventually be consolidated. It would be encouraging to see the Belt and Road move toward a more multilateral approach, unifying some of these related but fragmented efforts.

Another quality of good strategy is that it does not depend on what one scholar terms “fluff.” The Belt and Road is often described in exciting but vague terms. For example, it is advertised as a “new vision of innovative, coordinated, green, open and shared development.” Of course, buzzwords are a mainstay of policy statements around the world. Sometimes, fluff compensates for a lack of substance. It is also an essential weapon in the diplomat’s arsenal. There is an art to avoiding stating something uncomfortable or simply to “say something” when silence is not an option. The downside of lofty rhetoric is that it can raise questions about substance and intentions.

Letting others fill in the details not only raises questions but also leads to operational inefficiencies. With large investments at stake, central and local governments, private firms, and nonprofit organizations are incentivized to repackage their work around the Belt and Road. There are now over 100 think tanks studying the Belt and Road. There are Belt and Road fashion shows, music festivals, and cartoon exhibits. Part of the Belt and Road’s brilliance is how it strongly aligns with China’s domestic economic interests. But clearer priorities would help minimize waste and guard against rent seeking.

To succeed, the Belt and Road initiative must become a strategy. A Belt and Road strategy would not only benefit China but also the broader international community. It would focus on a narrower range of objectives and set priorities so resources are used more efficiently. It would embrace and enforce clear standards. It would use lofty rhetoric sparingly. In becoming a strategy, the Belt and Road could also become a better vehicle for regional integration and, ultimately, contribute more to the global economy.

It is not too late. By one account, the Belt and Road has not even started its implementation stage, which runs from 2022 to 2049. It is currently in the “strategic planning” stage. In an age of short-term pressures, this long view is another remarkable feature of the Belt and Road. At a time when governments are operating from one budget resolution to the next, and companies from one quarter to the next, China has set its eyes on the middle of the century. Putting forward a decades-long vision for global connectivity takes courage, particularly in today’s low-growth environment. Getting there will require a strategy.

This Commentary originally appeared in the May 2017 issue of the CSIS Simon Chair in Political Economy’s "Global Economics Monthly" newsletter. To subscribe to the newsletter, please email simonchair@csis.org.