What’s a trillion dollars between friends? China can shock you with all sorts of numbers, from the size of the population to the length of its bridges, but one of the gaudiest figures emerged in late October with the announcement that China’s FAW Group, the country’s first car producer based in Changchun, received a line of credit from a group of Chinese banks of approximately RMB 1 trillion ($149 billion), the largest loan in automotive history. It should surprise no one that FAW does not necessarily need all of these funds right now and that it is a state-owned enterprise (SOE). The purpose of the announcement is to reassure FAW and other SOEs that despite the decline in auto sales this year, the government’s support will not waver.

This mindset runs through much of the Chinese government’s approach toward high-priority industries and companies. There is no better example than new energy vehicles (NEV). Beginning in the late 2000s, China identified NEVs powered by lithium-ion batteries as a “strategic emerging industry,” and it is one of the key sectors contained within the “Made in China 2025” high-tech development plan. The government hopes that NEVs will help the country go from a technological follower to a leader in the automobile sector, reduce the country’s dependence on imported oil, and improve air quality.

As a result, it has spared no expense to jump-start both supply from manufacturers and demand from customers. By our calculations, between 2009 and 2017 Chinese national and local authorities have invested over RMB 390 billion ($58.3 billion) on the industry. The lion’s share has gone toward buyer subsidies to the tune of RMB 245 billion ($36.6 billion), but they have also poured large amounts of funding into research and development, government procurement of vehicles, and the charging infrastructure. Moreover, China has cut sales taxes for NEV buyers. 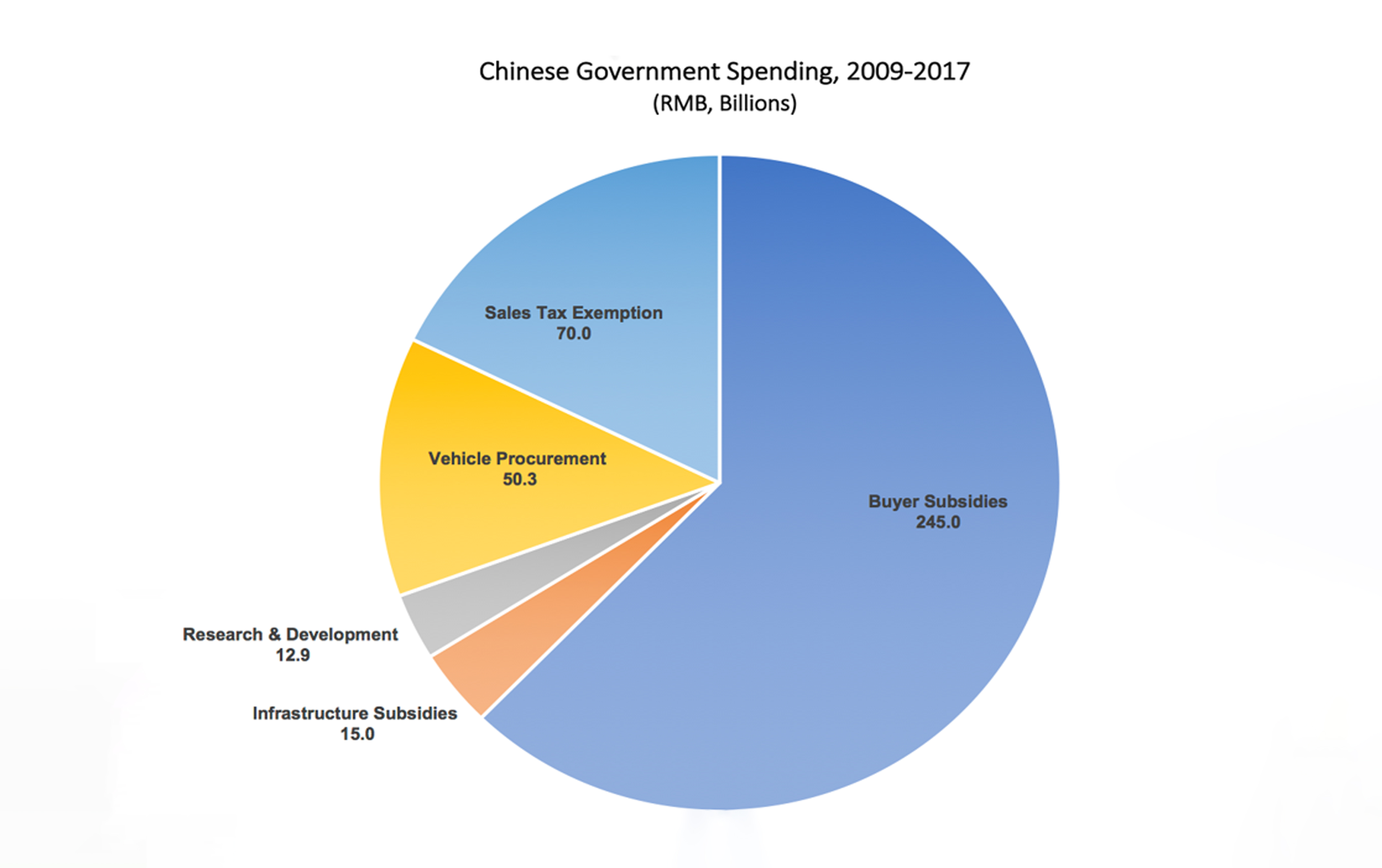 These policies may seem like a smart investment to promote a strategic sector that could unleash a generation of green growth. And certainly, producers and consumers have taken note. There are hundreds of NEV makers in China, including some that make very good cars. As a result, sales in 2018 may surpass a million vehicles. Whereas 5 percent of new car sales in China are NEVs, in the United States the comparable figure is not even 0.5 percent.

But it is important to recognize that government intervention has not jump-started the NEV market so much as substituted for it. Yes, there are companies across the supply chain and transactions between buyers and sellers, but much of this commercial activity would not exist without the heavy, visible hand of the state. Government spending is equivalent to over 42 percent of all NEV sales, an unbelievably high figure for any industry, even in the People’s Republic. It is impossible to calculate this spending as a proportion of profits since the sector has never been profitable. China’s best-known car company, BYD, reported profits in 2017 of RMB 4.1 billion on sales of RMB 106 billion, but it is a certainty that BYD’s profits derived from sales of their traditional gasoline-powered cars and batteries, not NEVs.

Massive government support is having broader worrisome effects. With so many NEV makers, it will be nearly impossible for any of them—even the best among them—to be profitable in the near future. And with so many NEVs rolling off factory lines, the chances for massive overcapacity are extremely high. This year overall auto sales have stagnated, and it is certainly possible that the highly optimistic projections of NEV growth are exaggerated. This is particularly true given that the government has started to cut subsidies. Consumers still see NEVs as an “ethical” purchase and are still worried about car quality, range, maintenance, and the cost of replacing the batteries. At some point, there will be a reckoning for producers. Many will turn to their investors or local governments for a lifeline. We should also expect a wave of consolidation, though it is still unclear whether it will be market driven or whether the state will act as a marriage broker.

The dangers are not limited to China’s domestic market. Should Chinese consumer interest lag, China could turn to the global market and try to export NEVs (and their charging infrastructure) at deeply discounted prices. And, of course, Chinese car producers may turn to the global market regardless. In any case, the result could be millions of Chinese cars dumped on global markets, which could threaten the livelihoods of producers up and down the supply chain that are not the beneficiaries of the Chinese state’s deep pockets. It is not hard to imagine a counter wave of antidumping and countervailing duties adopted to stop this flood.

All of these problems—lack of profits and threatened supply chains—might be justified should the move to NEVs lead to cleaner air. But in China over 70 percent of electricity still comes from fossil fuels, including coal, meaning that NEV adoption is not reducing air pollution but relocating it. And should the world one day find that hydrogen fuel cells are more efficient and safer for powering transportation than lithium-ion batteries, China may rue being locked into an inferior technology.

This story may sound familiar because it is. China’s solar industry went through the same boom-bust cycle, and the consequences went far beyond China’s borders, with solar panel producers from elsewhere driven out of business. And many experts believe that the most prevalent kind of solar panels on the market today is far from optimal but predominates because China prematurely scaled up this technology. This same dynamic could repeat itself in other sectors with such strong Chinese government support, including robotics and semiconductors.

The lesson here is not that China should refrain from developing NEVs or other advanced technologies, but that it needs to be much more attentive to market signals and carefully consider the ramifications for other economies. In particular, it is important to maintain technology diversity as long as possible and give producers and consumers at home and abroad sufficient opportunity to determine which options are most appropriate and facilitate technological change down the road. By not doing so, China runs the risk of taking wrong turns and going down bumpy, dangerous roads with calamitous consequences for itself and others. If China could combine its historic ambitions in high tech with greater humility about the foresight of state planners, such tragedies could be avoided.

Scott Kennedy is deputy director of the Freeman Chair in China Studies and director of the Project on Chinese Business and Political Economy at the Center for Strategic and International Studies (CSIS) in Washington, D.C. Mingda Qiu is a research associate with the Freeman Chair at CSIS. This commentary draws on the forthcoming CSIS report, China’s Risky Drive into New-Energy Vehicles, scheduled for publication on November 15, 2018.