An Interview with Victor Cha

With the advent of the G2 era, the security dynamics of Northeast Asia have changed rapidly, and new security and North Korea policies are in demand. While this issue is fervently debated among policymakers and scholars, CSIS visiting fellow from the Republic of Korea (ROK) National Assembly, Mr. Ilkwon Kim, met with the CSIS Korea Chair Dr. Victor Cha for a special conversation. Below is Mr. Kim’s interview with Dr. Cha. (This interview was published in Gookhwe Go [The National Assembly Review] in December 2010). 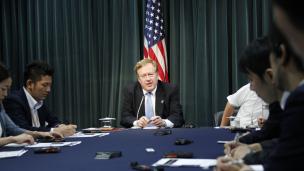 Patterns of Impunity: Human Rights in North Korea and the Role of the U.S. Special Envoy
June 17, 2021
On Demand Event

South Korea’s president could be under pressure to seek Biden’s help on Covid vaccines
CNBC | Yen Nee Lee
May 21, 2021
In the News

The Biden-Moon Summit: Rejuvenating and Modernizing the Alliance
By Victor Cha
May 19, 2021
In the News

Biden to push South Korea to take tough line on China at summit
Financial Times | Demetri Sevastopulo, Edward White
May 19, 2021
View all content by this expert