By Anthony H. Cordesman with the assistance of Joseph Kendall

Like all modern powers, China has a broadly structured national security system in which its forces are supported by a wide range of other organizations, security structures, and paramilitary forces. While China’s strategic doctrine describes how China’s armed forces will fight in the twenty-first century, its theoretical approach does not give a detailed picture of the PLA’s ability to fight as its doctrine demands. Examining the organizational structure of the PLA and its institutional modernization helps clarify its ability to fight and to understand the changes in each individual service’s force structure.

The changes in China’s military organization—specifically the character, roles, and missions of each element of Chinese military and security forces—reflect a major shift toward modernization over the last two decades. These shifts are also reflected in its military personnel forces, equipment, deployments, and tactics summarized in the following chapters.

At the same time, there still are key uncertainties in assessing the effectiveness of such developments. China has not fought a modern war, or any serious conflict for decades. This makes it difficult to assess how the impact of such widespread institutional reforms would really impact the PLA if it had to operate in a wartime situation.

A new report by the CSIS Burke Chair attempts to address these issues, and the full table of contents is listed below. The report is available for download on the CSIS website at https://csis-website-prod.s3.amazonaws.com/s3fs-public/publication/160801_chinese_military_reform.pdf. 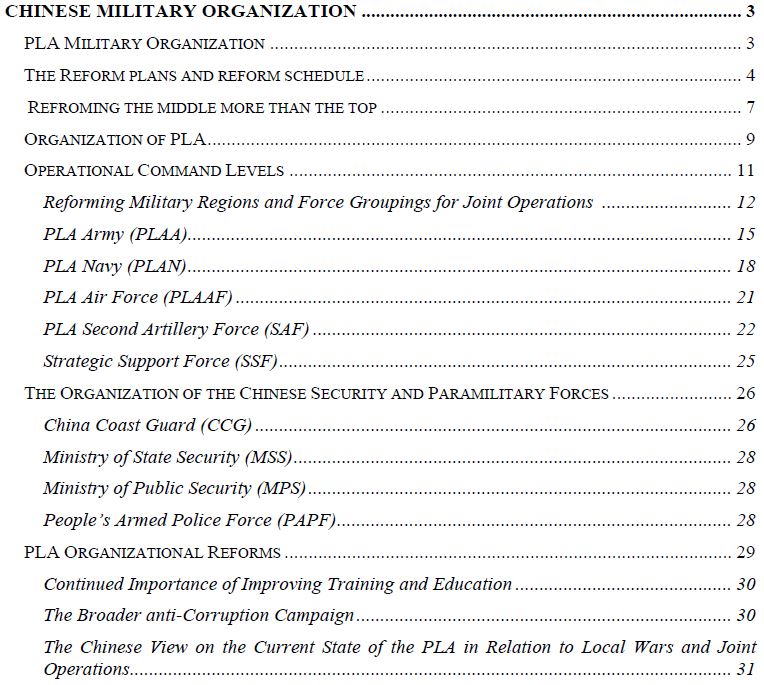 Asia , China , Defense and Security , and Geopolitics and International Security