Anthony H. Cordesman with the assistance of Grace Hwang

This chronology explores the full range of Russian competition with the United States. It focuses on the need to address all of the key aspects of this competition, including Russia’s “gray area,” hybrid warfare, and multi-domain/joint combined-domain operations.

It takes a different approach to defining such operations from those used in a number of official sources and other reports. As is discussed later in this chronology, the official and other open source reporting now available have serious limits.

As a result, this chronology is designed to illustrate key patterns in Russian activity that compete directly and indirectly with the United States, and it serves as a starting point for a more comprehensive analysis. It highlights the need to look beyond the boundaries of the current definitions of “gray area,” hybrid warfare, and multi-domain operations, as well as beyond the narrow focus on direct competition between the U.S. and Russia that excludes indirect competition involving other countries and non-state actors as well as Russia’s increasing cooperation with China.

It stresses the need to give the civil side of competition the same priority as the military and war fighting aspects of U.S. and Russian competition – and to do so on a global basis that stresses the fact that the most successful form of competition may be in the lower-level gray areas where there is little or no direct use of force in combat.

Many Russian low-level operations, cyber espionage, and political acts are only reported as serving commercial interests, reflecting local claims or interests, or supporting Russia’s broader security needs rather than as acts directed towards competition with the United States.

Many others are covert or involve indirect action, compete through the support of unofficial disinformation campaigns, use supposedly private business and NGO activities, or operate with the support of foreign state and non-state actors.

At the same time, this is also a working document that can only cover a limited number of the events involved in any given area of competition and that only highlights part of the major areas of competition – or campaigns – where Russia now competes. It is, however, being revised and expanded over time, and the authors will be grateful for any suggested revisions and additions. Please send these to Anthony H. Cordesman, Burke Chair in Strategy, at acordesman@gmail.com.

Finally, it is a supplement to a much broader analysis of U.S. strategic competition with both Russia and China that addresses the wider aspects of the changing military balance and the impact of broad areas of civil competition. This analysis is entitled U.S. Competition with China and Russia: The Crisis-Driven Need to Change U.S. Strategy. It is available on the CSIS website here.

Organizing the Chronology by Campaign

The following portions of this chronology address these issues by organizing the broad range of Russian gray zone and multi-domain civil and military operations into geographical regions where Russia is attempting to assert its influence and compete with the United States. No attempt is made to address every case.

The chronology also provides a map that color coordinates these operations into specific campaigns. These campaigns can represent either positive or negative gray zone operations. It is to be noted that countries which have a brighter and more vivid hue of a campaign’s color signify a strong positive economic, military, or civil relationship with Russia. These include, but are not limited to, arms sales, access to natural resources, military alliances, and joint civil development projects. 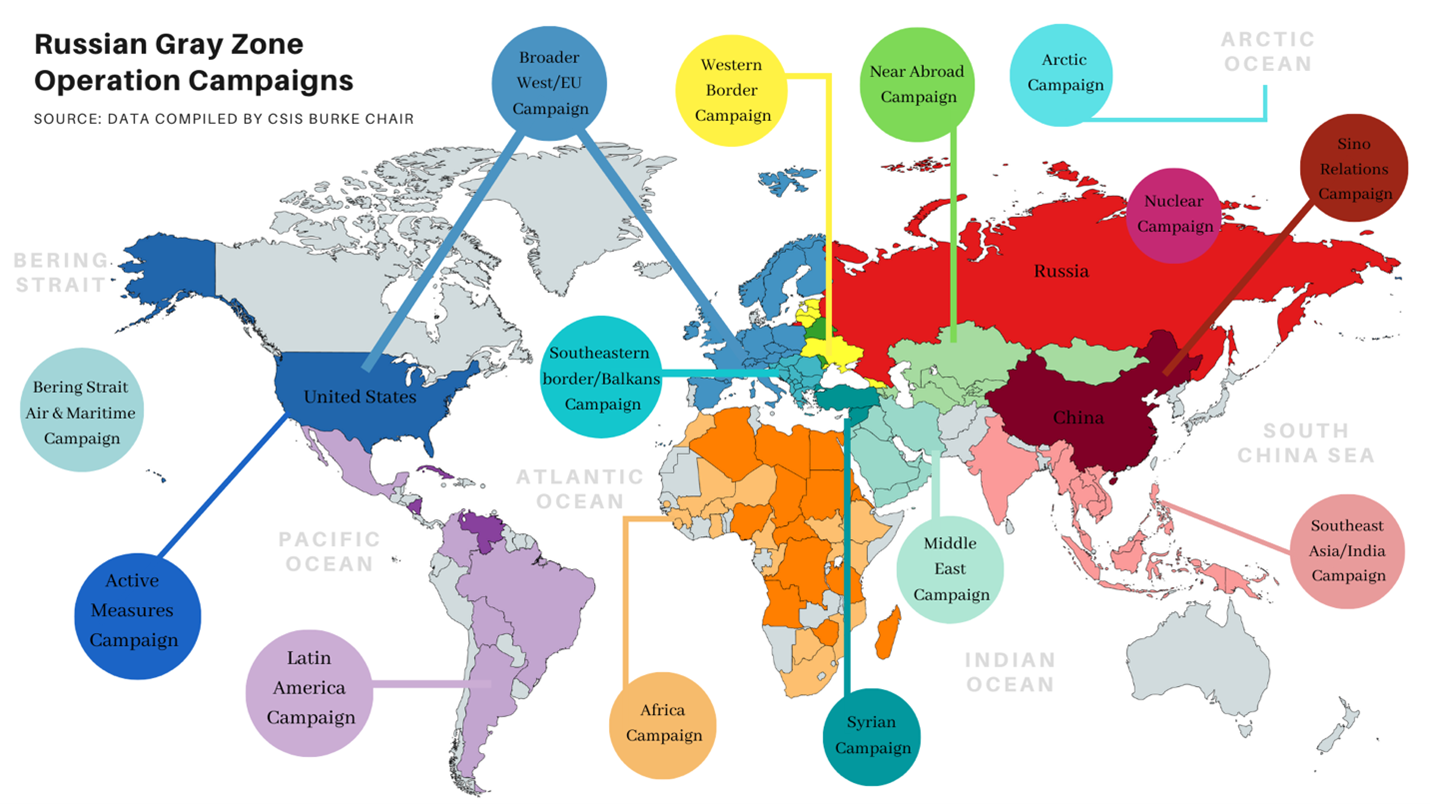 This report entitled, Chronology of Possible Russian Gray Area and Hybrid Warfare Operations, is available for download at https://csis-website-prod.s3.amazonaws.com/s3fs-public/publication/200702_Burke_Chair_Russian_Chronology.pdf