Conduct Is the Key: Improving Civilian Protection in Nigeria

Nigeria’s security forces have confronted armed non-state actors in northeast Nigeria for over a decade, and local civilians are caught in the middle. Violence has intensified in recent months, including multiple terrorist attacks in Felo, Monguno, and Nganzai in June 2020 that killed at least 120 people and targeted a UN humanitarian facility. According to UN estimates, 1.8 million people have been displaced due to violence, and more than 7 million people depend entirely on humanitarian aid to survive. Furthermore, 1.2 million people live in areas controlled by non-state actor groups, largely inaccessible to humanitarian assistance. Moreover, necessary public health restrictions enacted due to Covid-19 have affected humanitarian aid supply chains and the delivery of assistance. 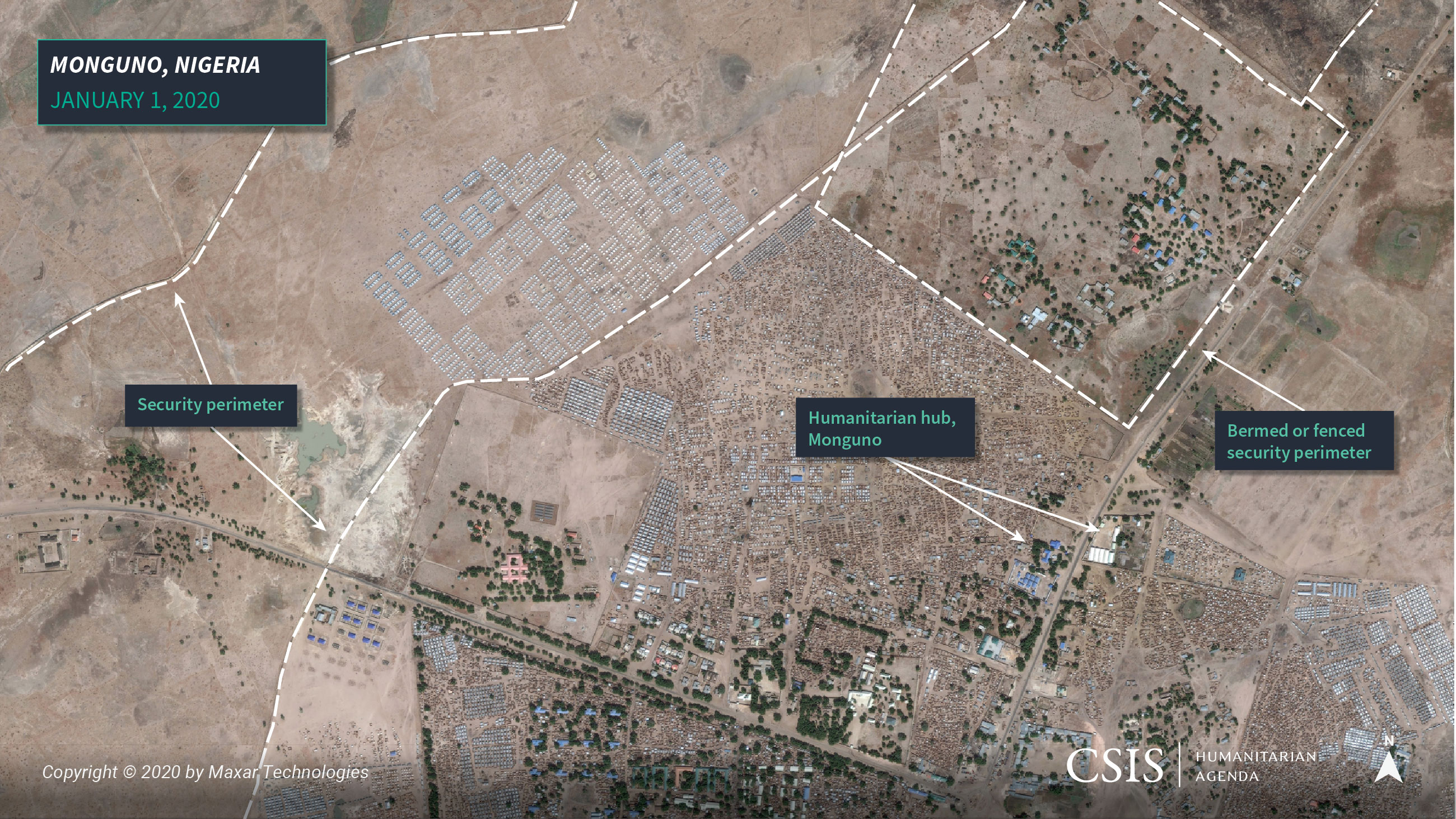 January 1, 2020: The humanitarian hub that was targeted in Monguno on June 13, 2020. Visible security barriers around the camp were breached by insurgents and attacks resulted in the deaths of several civilians.

Addressing Nigeria’s conflict drivers and attending to humanitarian needs will require a multi-faceted strategy that is not limited to the use of the Nigerian security forces. However, Nigerian security forces’ conduct will shape civilian perceptions of the legitimacy of the Nigerian state as it seeks to reassert control and will directly impact civilian security and access to humanitarian aid. Elevating civilian protection as an objective in Nigeria’s approach to the northeast to address these challenges will require changes in both Nigeria’s use of its security forces and U.S. and other donor relationships with Nigeria.

Civilians in the Crosshairs

In northeast Nigeria, civilians of all ages, ethnic and religious backgrounds, and genders have experienced a wide range of harm caused by Boko Haram and the Islamic State West Africa Province over the last 12 years. In addition, violent herder-farmer conflicts in the middle belt-region contribute to instability and put civilians at risk. Security providers, including the Nigerian military, police, and community-based militias, seeking to extend control over contested territories, have also been implicated in civilian harm. Civilians have been killed, and others face sexual exploitation and abuse, unlawful detention, restrictions on freedom of movement, family separation, and repeated displacement from armed actors.

The military, police, and community-based militias comprise Nigeria’s security forces. All have been implicated in serious civilian harm, even as they combat insurgent groups that also commit atrocities against civilians. Civilian authorities do not always maintain effective control over the military and police. Governors do not have supervision or authority over the military and police in their state. In addition, it is a preferred practice to deploy non-indigenes to conflict zones. If there is insecurity in a particular region, governors can receive additional federal funding, known as a "security vote," which they use for legitimate and illegitimate purposes. According to the U.S. State Department’s 2019 human rights report, Nigerian authorities did not file charges in some of the significant allegations of human rights violations by security forces and in cases of police or military extortion.

In the first years of the conflict, the military and police were slow to mobilize to the northeast. Since then, they have struggled to meet the multiple security missions across the country, including participating in the Multinational Joint Task Force (MNJTF), countering terrorism, enforcing maritime security, countering narcotics trafficking and other criminal networks, and peacekeeping. Police forces are viewed as oppressive and ineffective, thus putting more burden on the military to assume internal security missions. Additionally, Islamic State West Africa Province has directly targeted military logistics and supply hubs, constricting the military’s ability to maneuver across the region.

As the Nigerian military continues its offensive operations, civilians have suffered casualties and loss of life from airstrikes as recently seen in April 9, 2020, in Damboa. In contested areas in the northeast, the military has clamped down severely on humanitarian access. In “garrison towns” such as Pulka and Gwoza controlled by the Nigerian military, critical humanitarian needs such as health care, clean water, shelter, and protection are unmet, although in many cases, civilians are dependent upon humanitarian aid to survive. In Pulka, civilians are unable to move beyond the military-enforced town perimeter for fear of being attacked by non-state armed groups or by being perceived as part of the armed groups by the Nigerian military. 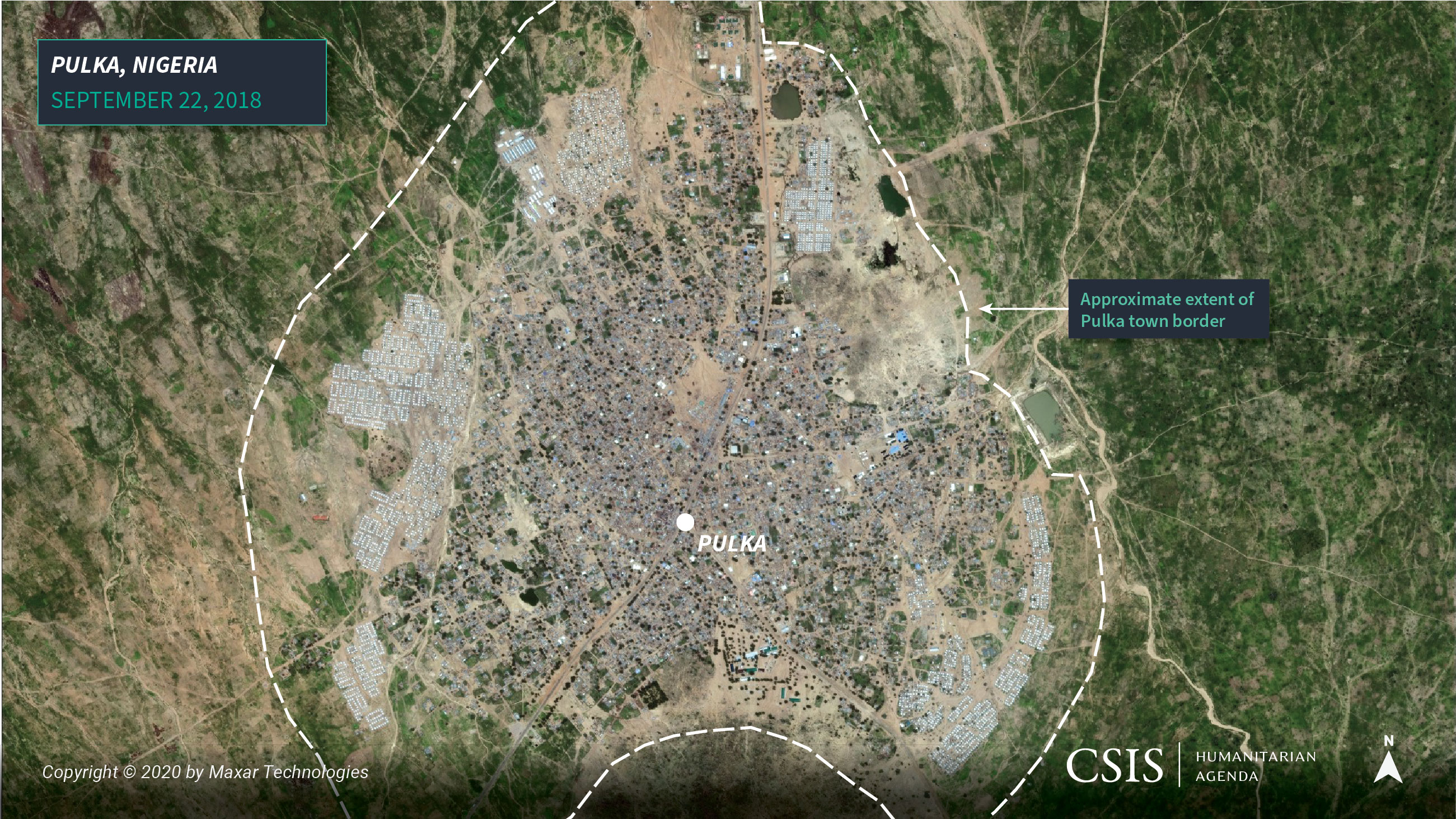 September 22, 2018: Securitized barriers around Pulka protect against attacks by insurgents on military and civilian targets. However, these barriers can also limit civilians’ freedom of movement outside the camp.

In addition, based on Nigeria’s Terrorism Prevention Act of 2013, which prohibits contact with groups designated as terrorists, the Nigerian military denies humanitarian access to areas outside their control. This restriction leaves over a million people without access to humanitarian assistance. The military reportedly prevents aid workers from reaching millions of people and prompts safety concerns as other parties to the conflict may perceive aid groups as taking the government’s side. Amidst restrictions due to Covid-19, more Nigerians allegedly have been killed by Nigerian military and police that the novel coronavirus itself, according to Nigeria’s National Human Rights Commission.

Northeast Nigeria has a history of self-defense groups mobilizing to provide protection or security in the absence of the state. The current crisis led to the proliferation of such groups, some driven by the desire to protect their communities and others formed at the behest of the government. Several of these community militias have been amalgamated into the Civilian Joint Task Force (CJTF). Some CJTF groups have received funding and in-kind assistance from the Borno State government, although civilian authorities do not have full control over their operations. CJTF now performs a range of security functions, often alongside the military, and has achieved tactical successes that reduced Boko Haram’s territorial control.

While community-based militias can provide valuable security functions, they also can cause civilian harm absent local and non-corrupt justice and accountability institutions or community-based norms for protecting civilians. Although CJTF forces are often based in their communities, some CJTF abuses may be attributed, in part, to the fact that some units have separated from their communities of origin, thus diluting relationships with the civilian population, which allowed for positive checks on their behavior in the past. The Nigerian government will likely struggle to demobilize the CJTF, which reportedly includes between 23,000 to 31,000 members. The government has taken few steps to investigate or punish CJTF members who committed human rights abuses, including past recruitment and use of child soldiers. However, some military commanders have removed CJTF leaders from their positions when advocacy groups have raised reports of abuse. The CJTF has signed a commitment to abstain from the use of child soldiers; it remains to be seen whether all members will comply. The CJTF also challenges the authority of local government officials and traditional leaders. It has become integrated into the local war economy, reportedly along with the military, participating in criminal networks even as it acts as a local police force.

Nigeria will not succeed in addressing the root causes of conflict in the country if its civilians do not trust state security institutions to protect them. Despite continued abuses and lack of accountability of security forces, the Nigerian government has taken some important steps to address civilian harm resulting from its presence and operations. From 2016 to 2017, the Nigerian government, in partnership with civil society organizations, developed a draft policy on protecting civilians and mitigating civilian harm, still under consideration. Nigeria would be one of the few countries in the world, and the first in Africa, to adopt such a policy.

However, even if the government adopts this policy, given tenuous civilian control of the security forces, the Nigerian government will have to work with international donors and civil society on parallel efforts to incorporate civilian protection into training, doctrine, exercises, and operations of the security forces. The Nigerian military has, with the help of partners, integrated civilian harm mitigation into a number of its military training curricula. Brigades and battalions in the northeast are regularly engaging with community structures in a number of localities to improve the protection of civilians. Notable examples include providing firewood and farming patrols to protect civilians from abduction, harm, or death resulting from opposition group attacks. It will also need to strengthen independent justice institutions to hold violators accountable.

Despite international condemnation of security forces’ abuses, increases in international donor security sector assistance over the last three years have sent mixed messages to the Nigerian government. While abuses and a lack of accountability have subjected specific units—such as the CJTF—to restrictions under the Leahy Laws, and earlier in the conflict, the United States did withhold assistance as a policy matter following a pattern human rights abuses by Nigerian military units, it has been more willing to overlook these concerns in recent years. U.S. security sector assistance has increased under the Trump administration. The Department of Defense notified Congress of over $16 million in training and equipment support (10 U.S.C. 333) in FY2018 and FY2019 for Nigeria and has moved forward with the delivery of 12 Super Tucano light attack aircraft despite civilian casualty concerns in the conduct of Nigerian air operations.

Even with increased security sector assistance, U.S. in-country military presence is limited, and training is neither regular nor widespread. While Nigeria is an important security partner on the continent, the U.S. military lacks the presence and access required to oversee partner forces effectively, nor does it have the influence or degree of cooperation to overcome deficits in Nigerian capacity or conduct. As a result, the approach to mitigating civilian harm in Nigeria will have to include a range of measures that calibrates to the degree of leverage that outside donors like the United States can bring to bear.

Still, working in close collaboration with government and civil society actors, donors like the United States can take several concrete steps to help improve civilian protection in Nigeria. Establishing clear expectations for donor partnerships should include elevating the role of civilian protection, adherence to international humanitarian law, and respect for human rights. Encouraging the Nigerian government and security forces to adopt and implement the draft national policy on civilian protection should highlight the strategic benefits of mitigating civilian harm for improving the legitimacy of state control and be linked to technical assistance to the Nigerian military. Calibrating security sector assistance to account for specific risks and opportunities based on the past conduct of units within the security forces and actual security requirements will complement the implementation of the civilian protection policy. This could include a positive conditionality approach, linking new types of security sector assistance to concrete changes in behavior that the U.S. or other donors would like to see.

All security sector assistance activities should include training on civilian harm mitigation. A particular focus on encouraging Nigerian military leadership buy-in for civilian protection as a cornerstone of operational effectiveness, enhancing oversight and accountability both within and outside the military organization, and peer-to-peer socialization of civilian protection at the unit level, will help shift military culture and norms over time. Finally, buttressing the role of Nigerian and international civil society in accessing civilian populations and communicating with both the Nigerian government and international donors will improve data collection and assessments of civilian needs and targeted steps to address civilian harm.

Melissa Dalton is senior fellow and deputy director with the International Security Program and director of the Cooperative Defense Project at the Center for Strategic and International Studies in Washington D.C.