The Conventional Military Balance in the Koreas and Northeast Asia

By Anthony H. Cordesman with the assistance of Charles Ayers and Aaron Lin

Military balance has long been a key factor shaping the stability of the Koreas and Northeast Asia. For decades, the DPRK has shaped the military balance in the Koreas through periods of deliberate confrontation and military threats, threatening military movements and exercises, a steady military build-up, and sporadic acts of low-level violence ranging from assassination to artillery attacks and ship sinkings. It has focused on ROK targets, but has also consistently threatened the United States.

Moreover the term “conventional” does not apply to the forces each nation would have in many credible scenarios. Asymmetric and nuclear forces are likely to play a major role in the way any conflict develops, even if this only means deterring given military options or altering the political perceptions on each side of how to shape the fighting.

Asymmetric warfare can be used at any level of conflict, and much of the DPRK’s past behavior has used low-level asymmetric warfare to threaten the ROK at levels that have drawn a military response. The DPRK can also use its limited nuclear capabilities, and missile threats to try to deter ROK or U.S. conventional attacks on the DPRK, even if it has no intention of actually using nuclear weapons.

There is no one view of the military balance that is likely to shape any conflict between the Koreas. The Democratic People’s Republic of Korea (DPRK or North Korea) does not publish meaningful public assessments of the balance. As a new report by the CSIS Burke Chair shows, outside sources can make radically different counts of the conventional balance. The report is entitled, “The Conventional Military Balance in the Koreas and Northeast Asia,” and is available on the CSIS website at https://csis-website-prod.s3.amazonaws.com/s3fs-public/publication/160802_Korea_Conventional_Balance.pdf. 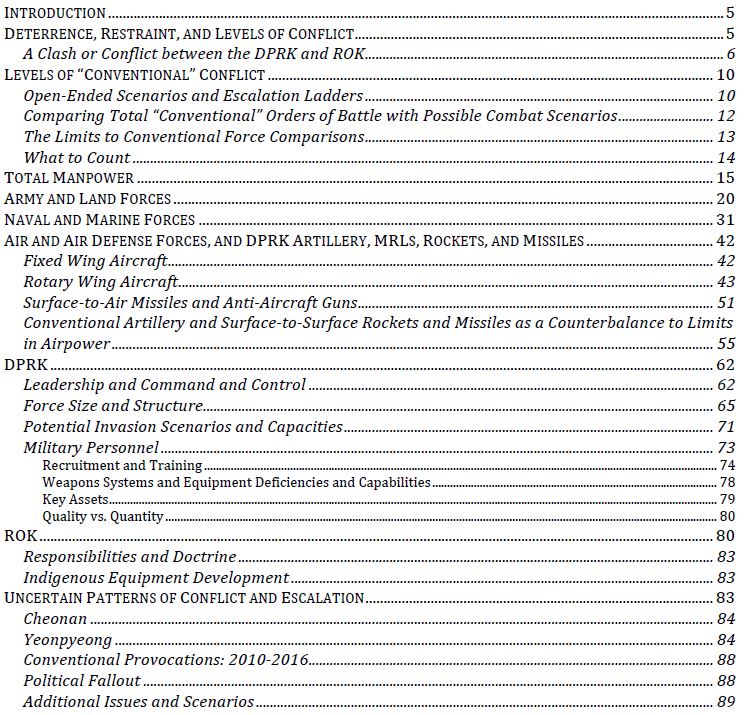 Failed Reporting and Analysis of the Afghan Peace Process
By Anthony H. Cordesman
November 18, 2020
In the News

An End to the $1 Trillion War in Afghanistan May Be on Horizon
Bloomberg | Roxana Tiron and Travis J. Tritten
November 10, 2020
Commentary

Afghanistan: The Peace Negotiations Have Become an Extension of War by Other Means
By Anthony H. Cordesman
October 28, 2020
View all content by this expert