The Coronavirus and Changes in the FY2021 Budget: Keeping Cuts in American Defense Spending in Perspective

The cost of dealing with the Coronavirus and its impact on the American economy have created a situation where the United States faces a potential crisis in restructuring the FY2021 federal budget and also probably in restructuring federal budgets for half a decade to come. The United States has already spent well over $2.3 trillion dollars to fund emergency relief to mitigate the impact of the Coronavirus in the FY2021. This, however, may only be the start of much larger payments to come.

Only a small portion of the $2.3 trillion will fund any kind of stimulus or recovery program. Given the real-world timelines involved, most will have to be spent to provide relief, medical services, and welfare/unemployment support. Moreover, the United States may have to spend substantially more on relief to cover the period in which the rising impact of the virus can be turned into a period of lasting decline, and possibly even in the later period when future levels of infection become so low that they are an acceptable part of life.

At some point, another major spending effort will almost certainly be needed to stimulate the economy and also to later help restructure and rebuild the economic aftermath. Moreover, the current FY2021 budget proposal again calls for massive cuts in foreign aid at a time when many of America’s strategic partners will face far worse economic challenges than the United States.

The Buke Chair at CSIS has prepared an analysis of the overall spending trends in the federal budget, the percent of total spending going to defense and national security, and the options for restructuring the FY2021 national security budget and federal spending in future years to reflect the impact of spending on the Coronavirus and the changes it is likely to make for the national security needs of the United States.

This analysis is entitled The Coronavirus and Changes in the FY2021 Budget: Keeping Cuts in American Defense Spending in Perspective . It is available on the CSIS website https://csis-website-prod.s3.amazonaws.com/s3fs-public/publication/200406_Coronavirus_Budget.GH2_.pdf?MaEjQhXAehQaVsu58E7uNPEjlr0IW0LR.

Planning for the Impact of the Crisis on Federal Spending

This means that the United States should begin to act now to develop contingency plans to deal with the federal cost of dealing with the Coronavirus that could cost more than $4 trillion over the next half-decade. At a minimum, the cost of coping with the Coronavirus will place a massive added burden on the federal budget in FY2021, and probably through FY2023-FY2025. It will do so at a time when the Congressional Budget Office (CBO) had projected a sharply growing budget deficit and national debt through FY2030 before the Coronavirus crisis even began.

As a result, the United States needs to examine every aspect of the President’s FY2021 budget submission and estimated federal spending over at least the next five years. Difficult choices and trade-offs will have to be made in federal spending, trade-offs that involve budget cuts that would not have been needed – or have been politically acceptable – before the Coronavirus become a national and international crisis. Almost inevitably, these cuts will have to be made in national security spending as well as in spending on civil domestic programs.

The analysis also shows that virtually all of the past and projected rises in federal spending since 1950 have been driven by civil entitlement spending. Given the need to preserve national security, this means that most of the adjustments in the FY2021 budget and near-term budgets will have to come from the civil sector. It also shows that the recent and projected costs of the Syria-Iraq and Afghan wars have dropped to relatively low levels, and that cutting funding for these wars will not release major funding to deal with the Coronavirus.

But, There are Many Areas Where Defense Spending Can be Cut and Needs to Be Restructured

The final part of this analysis does show, however, that the proposed FY2021 budget is more a reflection of the shopping lists of the military services than anything approaching a plan to meet U.S. strategic needs. There are areas where defense spending can be cut and there are also a wide range of areas where the Coronavirus imposes strain on other states, which indicates that the United States does need to restructure its national security spending.

These needs to restructure national security spending are summarized at the end of the analysis, including a need to modernize the U.S. defense budget and to adapt to the fact that the virus will increase instability in many other countries – including U.S. strategic partners. It will be several months before the full scale of the Coronavirus crisis is known, but – once again – it is already time to begin considering the options for reducing spending and the priorities for restructuring the FY2021 budget request. 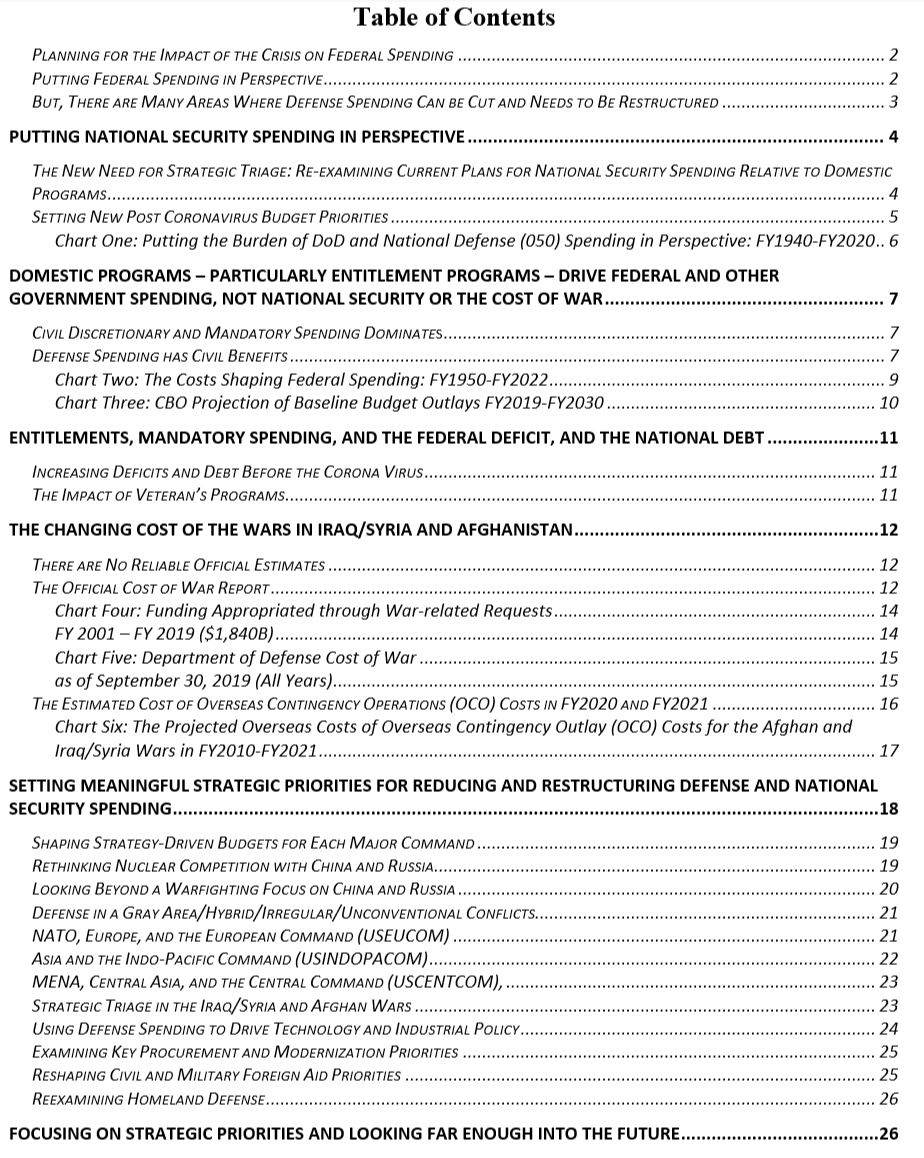