On April 15, Gavi, the Vaccine Alliance, and the U.S. government co-hosted a high-level meeting centered around the theme of “One World Protected” to launch a fundraising campaign for the COVAX Advance Market Commitment (AMC). The COVAX AMC is a financing mechanism intended to make Covid-19 vaccines available at low cost for 92 lower- and lower-middle income countries with an annual gross national income per capita of less than $4,000. An adaptation of an earlier financing model used successfully to incentivize the production and distribution of new vaccines for pneumococcal disease, the COVAX AMC works by assuring manufacturers of a commitment to purchase a large quantity of vaccines and then uses donor funds to make them available at a reduced price per dose for lower and lower-middle income countries.

Given surging Covid-19 caseloads in several world regions; the proliferation of more transmissible and deadlier variants of SARS-CoV-2; and a global imbalance in access to vaccines, with high-income countries having already claimed much of the available vaccine supply, securing the funds necessary to enable a rapid and equitable distribution of vaccines to lower- and lower-middle income countries is essential to protecting global health security and preventing further social and economic disruptions.

Q1: What is the relationship of the COVAX AMC to COVAX?

A1: COVAX is the vaccine pillar of the Access to Covid-19 Tools Accelerator, launched last April by governments, foundations, and multilateral organizations to incentivize the development of Covid-19-related vaccines, diagnostics, and therapies. The organizations overseeing COVAX include the World Health Organization (WHO), the Coalition for Epidemic Preparedness and Innovations (CEPI), and Gavi. In its role as host of the COVAX Facility, the procurement platform that provides vaccines to the countries participating in COVAX, Gavi works with the AMC-eligible countries, as well as at least 98 self-financing middle and high-income countries, to pool demand for Covid-19 vaccines; negotiate the vaccine purchases with manufacturers; and manage equitable global distribution of a still-constrained supply of Covid-19 vaccines, based on population needs.

Q2: How will Gavi use the funds secured for the COVAX AMC?

A2: Prior to the April 15 event, COVAX had secured approximately $6 billion in funding from governments, foundations, and the private sector. Its goal has been to provide 1.8 billion people, or 20 percent of those living in the AMC-eligible countries, with Covid-19 vaccines by the end of 2021. The new campaign seeks an additional $2 billion in donor government, foundation, and private sector support, along with $1 billion from multilateral development banks and AMC-eligible country contributions, to reach an even greater number—nearly 30 percent of the population in AMC-eligible countries—over the next nine months. While commitments totaling nearly $400 million were announced at the April 15 event, Gavi is hoping a greater number of governments will announce contributions at a pledging conference in June, to be hosted by Japan. 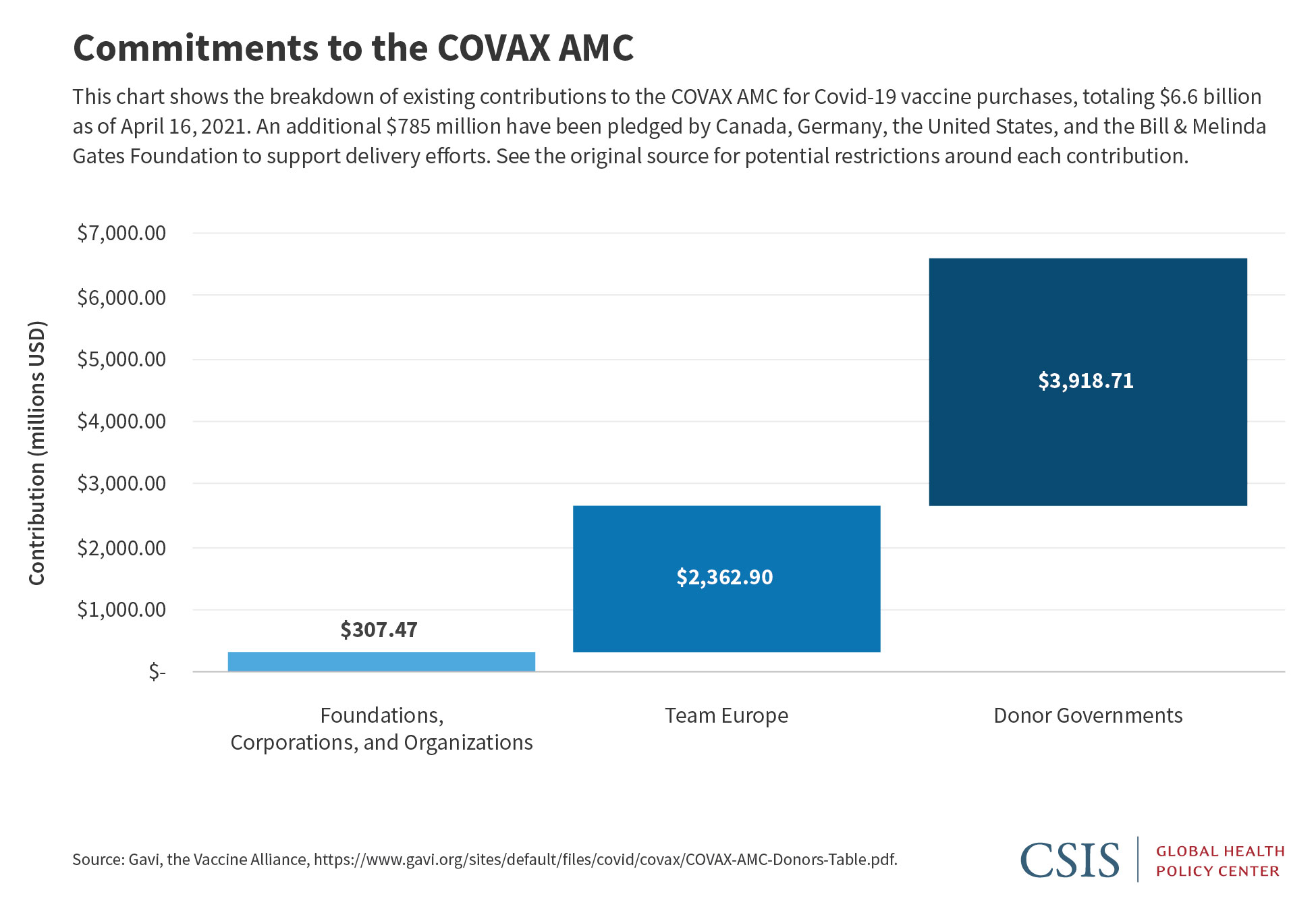 Q3: What have COVAX and the COVAX AMC achieved?

A3: Since COVAX debuted in April 2020, at least 190 countries have joined, signaling their commitment to purchase Covid-19 vaccines through the COVAX Facility. That number includes the 92 lower- and lower-middle income countries that are getting vaccines through the COVAX AMC, which was announced at the Global Vaccine Summit in June 2020, as well as middle and high-income countries, which are self-financing their vaccine purchases.

For Gavi, this has meant working with a number of high- and middle-income countries that have not previously worked with the Vaccine Alliance, as it has directed its support to lower- and lower-middle income countries since its launch at the 2000 World Economic Forum. It has also meant negotiating advance purchase deals with vaccine manufacturers—well before phase three clinical trials had even been completed—to jump-start production before regulatory approvals were in place. COVAX coordinates closely with UNICEF and the Pan American Health Organization (PAHO), which assume responsibility for the procurement of vaccines as well as syringes, personal protective equipment for vaccinators, and cold chain equipment.

COVAX began distributing vaccines to AMC-eligible countries in late February. To date, COVAX has distributed more than 45 million doses in 120 countries, including more than 65 percent of the AMC-eligible countries. To ensure that migrants and refugees do not miss out on access to Covid-19 vaccines, the Gavi Board has also approved setting aside 5 percent of Covid-19 vaccine doses as an “emergency humanitarian buffer,” which will cover populations in conflict settings or outside their own borders. An indemnification scheme has been established to ensure the availability of funds to compensate people who may suffer adverse events following administration of one of the new vaccines.

Q4: What challenges has COVAX faced?

A4: Covid-19 vaccines are new, and global supplies remain constrained, in part because high-income countries have secured far more of the limited doses than they might realistically use this year. Because of that, COVAX has so far been unable to secure enough doses to cover the needs of even 20 percent of the populations in the self-financing countries as well as the AMC-eligible countries.

COVAX has negotiated advance purchase deals for seven products, but several of those have yet not made it through clinical trials to approval. And two products that have been approved, the AstraZeneca vaccine and the Johnson & Johnson vaccine, are currently facing challenges associated with reported adverse effects, with some countries having suspended their use pending further review of clinical data. Meanwhile, COVAX has made an agreement with the Serum Institute of India to manufacture more than 1 billion of doses of the AstraZeneca vaccine for distribution to the AMC-eligible countries, but the government of India is currently limiting the export of vaccines, saying that the South Asian nation, which has been reporting record-breaking totals of more than 300,000 new Covid-19 cases per day since April 20, needs them to respond to the rapidly accelerating surge of infections there.

Some countries that have secured more Covid-19 vaccine doses than they need have signaled they will donate excess supplies to COVAX or through bilateral channels, but there is not yet a coordinated international approach to this process. Many self-financing middle-income countries have looked beyond COVAX for vaccine supplies. They have either sought separate deals with Serum Institute of India, Pfizer/BioNTech, and Moderna, or have looked to the Gamaleya Research Center in Russia, which produces the Sputnik V vaccine, or the Chinese firm, Sinovac, which produces CoronaVac, to secure needed doses. Neither of the latter two products has been incorporated into the COVAX portfolio. The lack of predictability with respect to global vaccine supplies points to the need for a greater number and diversity of manufacturers, ideally situated in lower- and lower-middle income countries, from which approved products could be rapidly deployed to surrounding regions.

Even when the COVAX-procured vaccines are available to countries, some governments are not yet prepared to distribute them, in part because many countries’ immunization programs are focused on children, whereas the Covid-19 vaccines will target adults first. Some of the vaccines require ultra-cold storage or two doses provided several weeks apart, posing logistical challenges for reaching remote populations without electricity or transportation options. Recruiting and training health workers to deliver the new vaccines also requires funding and support from health agencies already stretched thin due to outbreak response.

At the same time, some are hesitant about being injected with vaccines, and the recent press coverage regarding the suspensions of AstraZeneca and Johnson & Johnson vaccine distribution in Europe and the United States has fueled concerns among populations in lower- and lower-middle income countries about the safety of those products. Gavi, UNICEF, and the WHO all support efforts to provide people with accurate information about the Covid-19 vaccines and to help health workers and trusted community leaders both answer peoples’ questions and address the misinformation, rumors, and conspiracy theories that may limit peoples’ willingness to be immunized once vaccines are available to them. 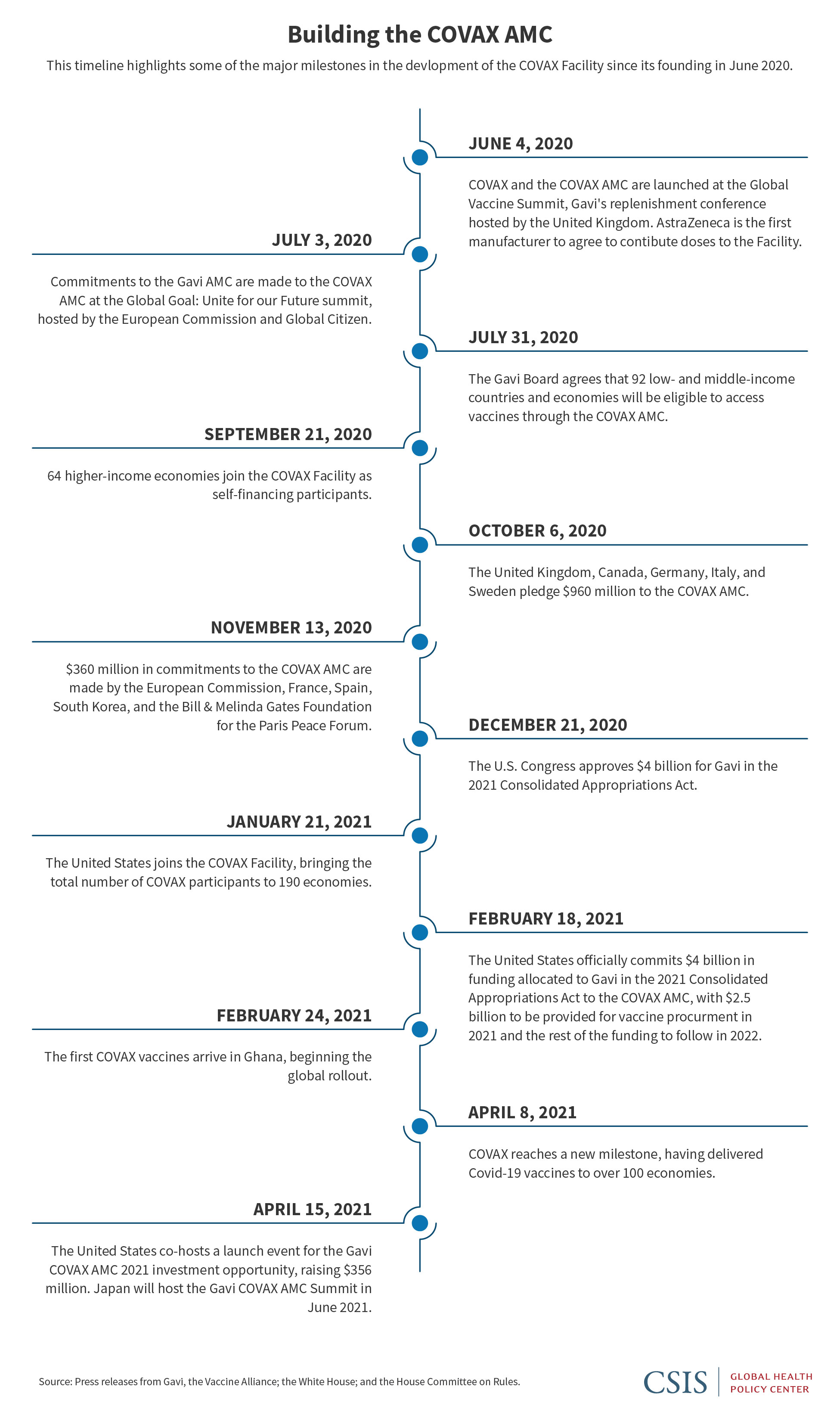 Q5: How is the United States supporting COVAX?

A5: While the United States, under the administration of President Donald Trump, initially signaled last August that it would not join COVAX, in December 2020 Congress approved $4 billion for Gavi to support vaccine procurement and distribution for the 92 AMC countries, making the United States the single largest donor to COVAX so far. Then, in January, the Joseph Biden administration indicated the United States would, in fact, join COVAX. The United States co-hosted the April 15 campaign launch, at which Secretary of State Antony Blinken urged other governments, foundations, and the private sector to increase their support for the COVAX AMC. But there is more that the United States can do, including working bilaterally through the U.S. Agency for International Development and the U.S. Centers for Disease Control and Prevention to support AMC-eligible countries in preparing to distribute Covid-19 vaccines, collaborating with other high and middle-income countries to generate additional financial support for COVAX, and supporting efforts to strengthen overseas manufacturing capacity in lower- and middle-income countries to help make additional vaccine supplies available where they are needed most.

Q6: Why is it important to support the global distribution of Covid-19 vaccines while the United States continues to push vaccines at home?

A6: As the Covid-19 vaccine rollout in the United States continues, there is hope that the country may soon shift from crisis mode into a new phase of social engagement, political reconciliation, and economic recovery. But with new waves of Covid-19 cases surging in several world regions, including the United States, and increasing transmission of SARS-CoV-2 variants, distributing vaccines to just the U.S. public is not enough.

The United States has already loaned 4 million doses of the AstraZeneca vaccine, which has not yet received emergency use authorization domestically, to neighboring countries Mexico and Canada. And on April 26, the White House announced the United States would donate an additional 60 million doses of AstraZeneva vaccine globally, pending the outcome of a safety review at the plant where the vaccines are manufactured.

Supporting COVAX and the COVAX AMC-eligible countries with financing, technical assistance, and vaccine supplies can also play an important role in ensuring the equitable distribution of Covid-19 vaccines globally. Strengthening opportunities for lower- and middle-income countries to purchase Covid-19 vaccines at an affordable price and effectively distributing them to populations that are confident in the products is an investment in the longer-term global trade, political, and defense relationships that are critical to U.S. national security, as well.

Katherine E. Bliss is a senior fellow with the Global Health Policy Center at the Center for Strategic and International Studies in Washington, D.C.