It is still too early to ascertain whether the Covid19 pandemic will reshape the world as we know it or accelerate its existing trends. How the Covid-19-induced economic slowdown affects China’s clean energy trajectory is an especially important question as the world continues to face the parallel crisis of climate change. China’s actions in response to each of these crises will go a long way toward answering whether the world will emerge from the restriction of Covid-19 with a greater or diminished chance of implementing a global clean energy transition. On the one hand, Chinese authorities could use this crisis as an opportunity to implement much-needed reforms to “rebalance” its economy away from the investment-heavy growth model that fundamentally constrains its climate response. More likely, however, is that the sheer economic and financial stress of the Covid-19 crisis will see authorities return to its tried-and-true playbook, offering some respite for its clean energy industries without addressing the structural foundations of its massive carbon emissions and debt problems.

All of China’s decisions from here on out will be constrained by how the economic fallout from Covid-19 affects the enormous debt overhang that has grown since its stimulus response to the last global downturn a decade ago. China announced on April 17 that its GDP plunged by 6.8 percent, year on year, in the first quarter of 2020; the first time its economy has shrunk in over 40 years. All key indicators—including fixed-asset investment, unemployment, and consumption spending—fell on an annualized basis, and the latest IMF global growth projection forecasts that GDP will fall by 3 percent for 2020. What’s more, it appears that the global economy will face its largest downturn since the Great Depression and China’s top trade partners will be the hardest hit. While China’s manufacturing and export sectors are no longer as critical to its economic growth as they were during the 2008 crisis, they will be one less source of growth that authorities can count on.

All these factors are putting stress on a financial system that was already overleveraged before the current crisis hit. China’s financial system has increased 4.5 times in size since the global financial crisis of 2008, representing a staggering 50 percent of global GDP. China has the most indebted corporate sector on the planet, trillions of yuan worth of non-performing loans, and interest repayments on its existing credit that exceed nominal GDP growth each year. That China has been able to avoid a financial crisis up to this point is a minor miracle. Authorities have taken dramatic steps in recent years to slow credit growth from an average of 18 percent between 2007 and 2016 to 7.7 percent over the last two years (see chart below). All this is to say that Chinese authorities’ focus is likely to be all consumed by the short-term concerns of returning to its GDP growth targets and maintaining financial stability, leaving little room for clean energy, rebalancing, and climate mitigation. 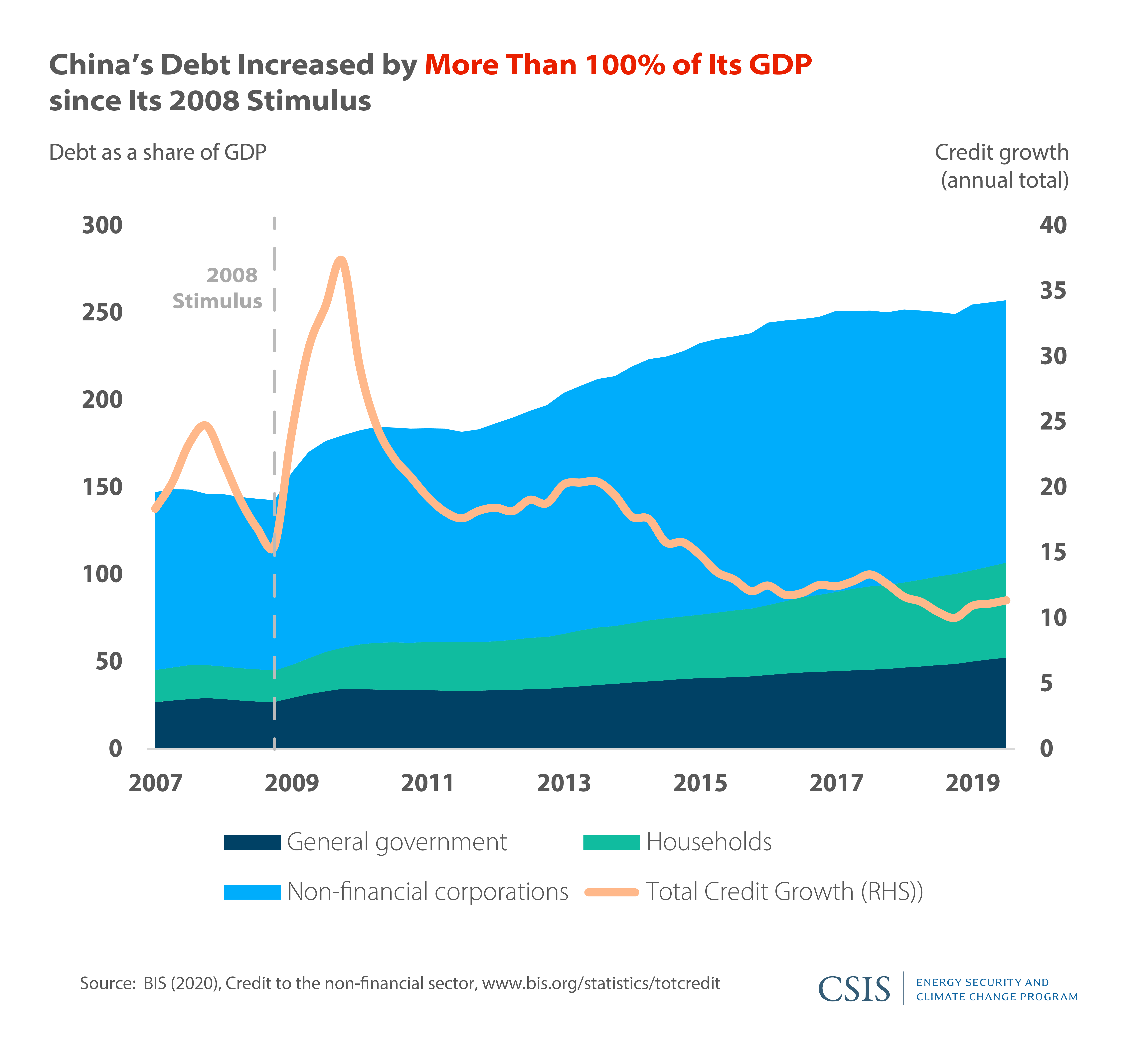 China’s economic responses to the crisis have so far borne out this theory. China has typically responded to economic downturns through massive public investments in infrastructure and large-scale spending by key state-owned enterprises (SOEs). This time, however, its response has been more subdued, with fiscal measures worth less than 2 percent of GDP, compared to a total stimulus package in 2008 estimated to have reached 27 percent of GDP. Rather than trying to boost the economy, authorities have been injecting liquidity into the banking system in an ongoing attempt to avoid financial panic. Measures include lending by state-owned banking sector to businesses and bond issuance by local governments for construction projects. This helps in terms of maintaining short-term stability, but new bank loans in the first quarter of 2020 reached $1.01 trillion, a new record, potentially undoing years of deleveraging efforts. China’s 2008 stimulus package allocated a healthy share of resources toward energy efficiency and carbon reduction, and the world has been on the lookout for a repeat this time around. However, bold action is highly unlikely this time around given these financial constraints and the possibility of creating a financial panic that could overshadow even a global pandemic.

To the extent China’s recovery strategy includes energy, there are temptations for Beijing to rely on energy as well as energy-intensive industrial sectors that can generate short-term returns. A combination of the Covid-19-induced lockdowns and the fall in exports point to a significant unemployment problem, including several million estimated job losses. Beijing will thus likely empower SOEs, which are not only a major source of employment but are also known for their proclivity to favor more energy-intensive activities. While some academic studies have estimated new employment generation in China to be greater from investment in renewable energy sector—which is dominated by non-SOEs—than fossil fuel energy sectors, this ignores the critical political and regional dynamics of SOE employment.

Also, cost-conscious energy policy could mean a pause on the country’s drive for switching from coal to gas that has been underway for years. As exemplified by the Premier Li Keqiang’s statement in October 2019, coal-fired power generation was already starting to regain political support as China sought to recalibrate its approach to energy security in light of continued trade tension with the United States. While this would be at odds with China’s publicly stated climate goals, such as its target to reach peak emissions by 2030, it appears likely that authorities will ease restrictions on coal overcapacity to facilitate growth and job creation. Some recent reports suggest China may be planning a “major investment spree in coal-fired generation” of more than 150GW, which could be devastating to global climate goals. As with other stimulus measures, much will depend on whether authorities delegate spending to SOEs and local governments, or the private sector. If it’s the latter, the declining competitiveness of coal will limit new investment, however, if the former, coal is a tried-and-true stimulus for the local governments and a stimulus package could see a dramatic resurgence in coal production.

One unknown factor is how air pollution will fit into these decisions. Most of the fall in Chinese coal production has been driven by concerns around local air pollution. With Covid-19 causing a steep fall in air pollution, communities may be less willing to return to the status quo. One researcher estimates more lives have been saved in China thanks to lower air pollution than have been lost to the novel virus. Additionally, recent research—while awaiting peer review and publication—has linked long-term exposure to pollution and Covid-19 death rates, which underscores the salience of addressing environmental pollutions as well as the opportunity that the clean energy technology sector presents for China.

Indications are that the recovery will rely on long-time incumbent players and energy sources, but clean energy may still be a focus of Chinese agenda. The global economic downturn will likely weaken the market opportunities for China, which supplies about two-thirds of solar panels globally. However, domestic demand is the primary driver of renewable energy growth and investment in China and here signs of life remain. Though investment has fallen in recent years (see chart below), China continues to be the largest source of renewable energy growth globally. For example in March 2020, GCL System, a large Chinese solar PV manufacturer, announced a $2.5 billion investment in the world’s largest solar factory, which could double the annual installed capacity in China or be able to satisfy 51 percent of global solar demand. 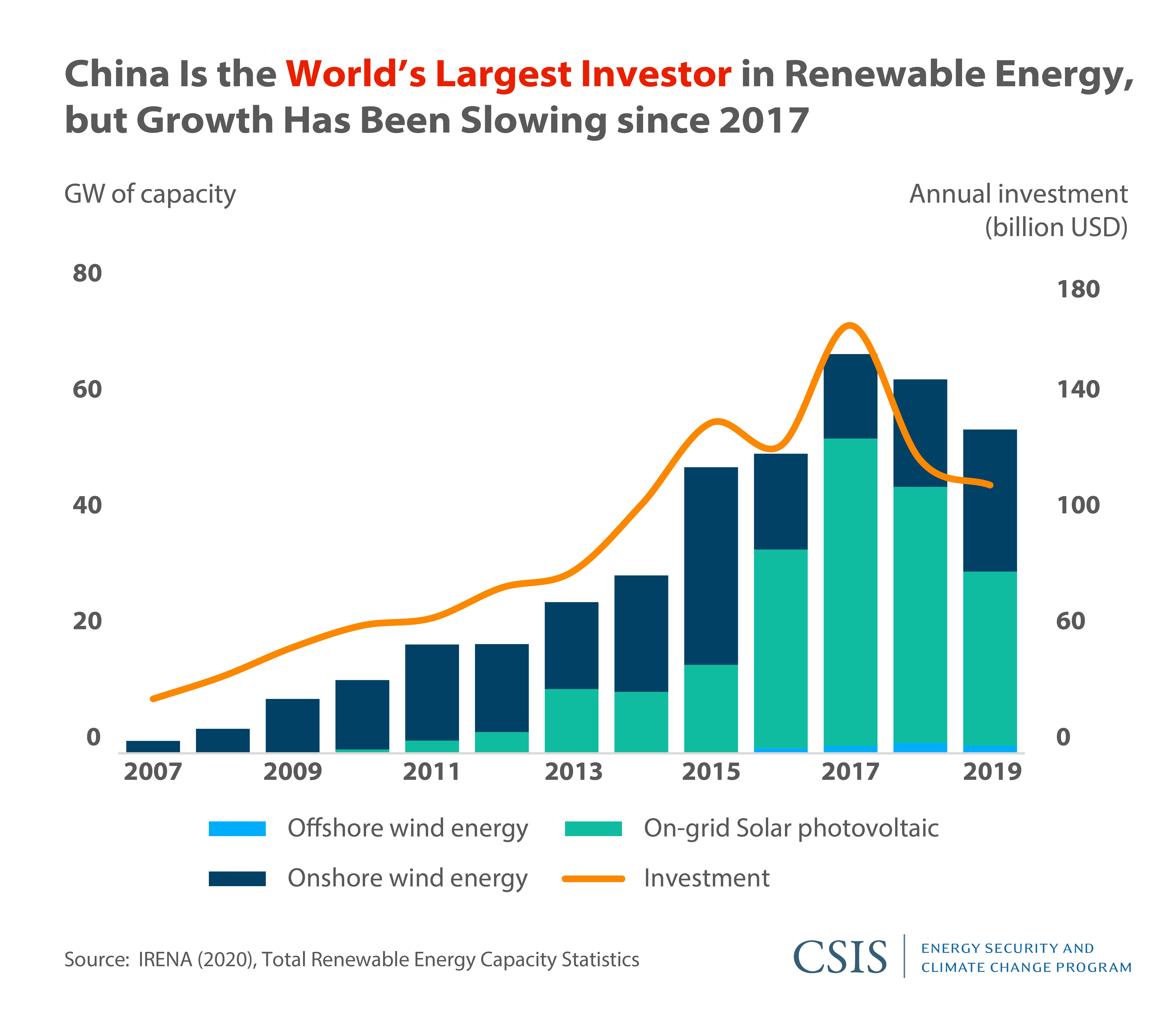 Another important sector for the global energy transition is electric vehicles (EVs), which will likely fall on hard times. The Covid-19-induced economic downturn will constrain demand for new vehicles despite Beijing’s decision to extend EV purchase rebates it had earlier considered phasing out by the end of 2020. The significant economic downturn is a blow to the sales of personal vehicles, whether it is electric- or internal combustion engine-based, although the latter, in theory, benefit from the current low oil price environment. However, the Chinese EV sector’s hardship may be relatively short lived, as China’s EV promotion is driven by industrial competition interest—as seen in Made in China 2025—as well as environmental considerations. China’s motivation for new energy vehicles, especially EVs, includes its desire to reduce dependence on imported oil, transform itself into a leader in the automobile sector, and improve air quality. One challenge the Chinese EV sector has faced is the danger of overcapacity; but to the extent that the economic downturn may bring about consolidation, the sector could emerge stronger and more viable in the long run.

Even if its immediate response to the Covid-19 crisis fails to stimulate clean energy investment in any significant way, its most important decisions from a climate perspective will still be found in its upcoming Five-Year Plan (2021-25). This document will signal whether China plans to double down on its state-driven growth model or usher the long-hyped era of “rebalancing” toward more consumption, services, and lower-emitting sources of growth. Fundamentally, China will be unable to reach peak emissions by 2030 if it can’t slow energy demand growth and move away from the investment-heavy, energy-intensive sectors that have underpinned growth in the past. Even before the crisis hit, China was in desperate need of reform to address its falling productivity, aging population, and over-indebtedness. The massive slowdown induced by Covid-19 only increases the need for market-oriented reforms, particularly the large-scale privatization of inefficient SOEs. These reforms are necessary not only for improving financial stability and economic growth but also for reducing emissions as well.

No country will go unaffected by this pandemic. No economy will have an easy path to recovery, and China is no exception. This was supposed to be an important year to showcase its accomplishments and outline continue ambitions as the government finalizes the Fourteenth Five-Year Plan (2021-2025). China is reportedly considering delaying the submission of its updated climate pledge until after this November, reflecting the significance of the U.S. presidential elections to its climate diplomacy strategy. This crisis may be an opportunity in disguise for China to implement long-awaited reforms while continuing to support clean energy industries. Only time will tell if China succeeds in avoiding the temptation to step in with a large stimulus that could lock in carbon emission above and beyond any climate targets, while retaining the financial stability needed to implement key reforms down the road.