Covid-19 Has Consequences for U.S. Foreign Aid and Global Leadership

The United States is undergoing an unprecedented domestic crisis in confronting and controlling the spread of the coronavirus. Faced with both a public health crisis and significant economic disruptions, Congress has now passed three supplemental spending bills meant to provide emergency support. The last supplemental contained nearly $2 trillion worth of support; Congress has indicated that there may be more supplementals in the work if this package does not have its intended impact. Meanwhile, there are rising calls for the United States to also turn its attention externally—to play a leading role in blunting the impact of Covid-19 in developing countries; the supplementals contained approximately $2.25 billion in initial spending to support the State Department and the U.S. Agency for International Development (USAID) in responding to Covid-19. This amount will not be enough if Covid-19 spreads across developing countries as it already appears to be. It comes at a time when the United States faces both an open question as to whether it will continue to lead globally and the need to respond forcefully at home to the economic disruption caused by Covid-19.

While the number of Covid-19 cases in the United States has passed its projected peak, Congress will continue to face pressure to increase spending on domestic economic priorities. The onset of new domestic supplemental legislation to mitigate the economic impact of Covid-19 will most likely exacerbate preexisting budget constraints and decrease appropriations for the 150 account. Last year, Congress passed a two-year budget deal that raised the existing defense and nondiscretionary defense (NDD) caps established under the Budget Control Act of 2011 (BCA). The agreement last year gave more money to NDD, but foreign aid still only saw a 2 percent increase from the 2019 fiscal year. The BCA originated because Republicans in Congress wanted to rein in spending in the wake of the recession, a move that could be repeated in the coming months or next year. 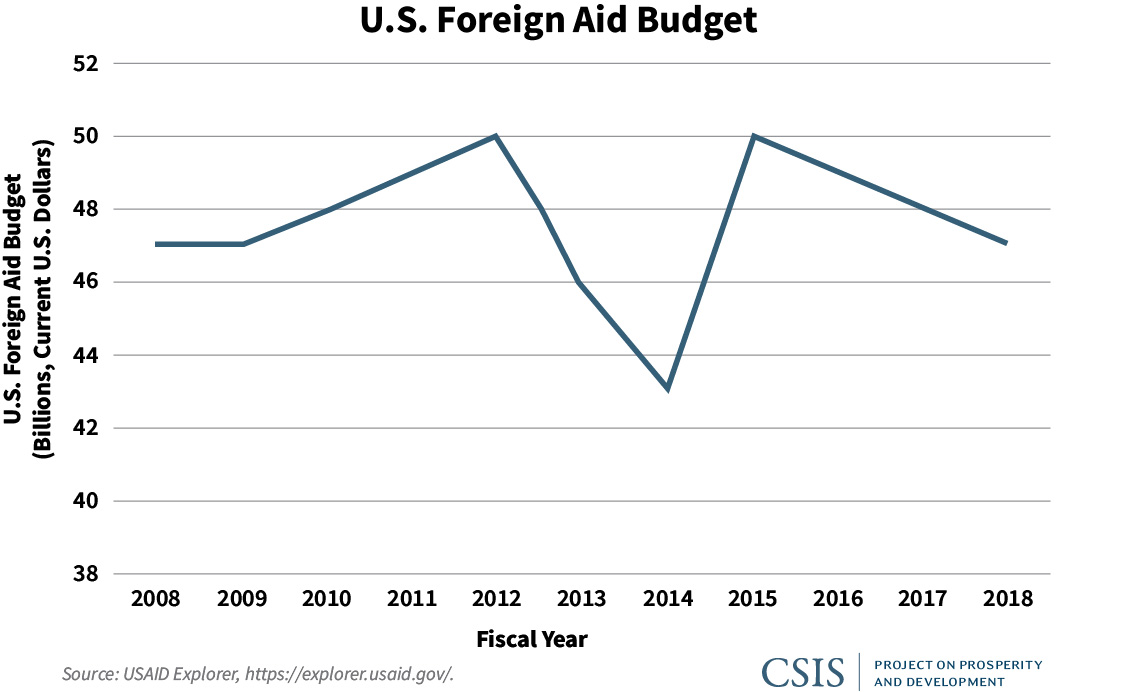 Historically a global leader in global public health crises, the United States has taken a more inward approach to the Covid-19 pandemic. While the United States grapples with controlling its own public health and economic crises, China has seemingly gotten its cases under control and has turned outward to the rest of the world. China’s so-called “charm offensive” (shipments of personal protective equipment, ventilators, etc.) has global reach to countries such as Italy, Peru, Japan, the Philippines, and South Korea. To that end, China is making a strategic decision to engage and support countries in their response to Covid-19.

As China’s mask diplomacy expands, there will be increasing pressure on the global public health system to:

Change the U.S. approach to global health spending to focus on strengthening country-based health care systems instead of acting reactively on a disease-by-disease basis or investing in parallel health systems.

The Covid-19 pandemic has exposed the Achilles’ heel of global health. While there have been incredible achievements in global health over the last 30 years, those gains are fragile, and the resilience of the systems may break under the onslaught of a pandemic like Covid-19. Donors have approached countering individual diseases as silos with scant attention paid to strengthening local health systems. This approach has yielded parallel health systems in many instances that focus on the delivery of commodities to tackle specific diseases (HIV/AIDS, malaria, tuberculosis, etc.) rather than strengthening holistic health systems that would help build resilient countries able to withstand the shocks of a global pandemic.

Since President Obama’s second term, there has been greater acknowledgement of the need to focus on strengthening health systems and support the Global Health Security Agenda. The Global Health Security Agenda was conceived in 2014 to combat against the increasing threat of global infectious diseases. President Obama’s 2016 executive order codified them as a U.S. national security imperative and solidified the United States’ commitment to global health.

While this was a good first step, more needs to be done. In FY 2019, approximately$3.7 billion in U.S. global health aid was allocated for HIV/AIDS; top recipients of HIV/AIDS funding included South Africa, Kenya, and Uganda. Maternal and child health received $876 million, with the Democratic Republic of the Congo, Nigeria, and Ethiopia receiving the highest amounts of aid. Malaria received the third highest amount of global health aid at$711 million ; top recipients included Nigeria, the Democratic Republic of the Congo, and Uganda. These programs are focused on combatting a specific disease rather than strengthening countries’ health care infrastructure.

Looking forward, the U.S. government should not double down on our past approaches. As the recent CSIS Commission on Strengthening America’s Health Security correctly points out, the United States needs a better strategy to tackling global health problems and promoting strong health systems both at home and abroad. While increasing global public health spending would be considered politically favorable since it yields easily measurable results, this decision would reinforce the existing foreign aid budget imbalance.

The U.S. government should lead a better approach to responding to global health crises that does not come at the expense of other global development funding. There will be a need for a holistic approach to mitigate the considerable economic disruption that will inevitably be caused by Covid-19. This will include continued support for food security, economic growth, governance and rule of law, and other vital areas that contribute to advancing development priorities. Coordination among multilateral development banks, development finance institutions, civil society, and private-sector actors will be essential to bolster economic growth. The United States cannot let gains in governance in developing countries erode during this time and should support local development partners. A new U.S. approach to global development should increase coordination with developing countries more effectively to increase domestic capacity and act as both a preventative and reactive force for public health crises.

The United States faces a crossroads in global leadership for health and pandemic preparedness. In 2014, it took the lead in responding to the West Africa Ebola outbreak and did so again in 2015 with Zika. The Obama administration took this action because it recognized that diseases that start in one country can very quickly spread across the world, imperiling U.S. national security and the hard-fought gains U.S. assistance has achieved in public health. Now is the time for the United States to reassert its global leadership in the global health space, or risk losing further ground to China.