India’s general election is over, and the newly reelected Modi administration has a slew of reforms that are ripe for implementing to shore up India’s teetering power sector. In the first term of the Modi administration, the government focused on providing electricity connections to all houses, aiming to deploy 175 gigawatts (GW) of new renewable energy capacity (mainly from solar and wind) by 2022 and to enact the Ujwal DISCOM Assurance Yojana, also known as UDAY, a reform meant to improve the technical and financial performance of the cash-strapped state-owned utilities (discoms). These major initiatives were not aimed at altering the structure and operation of the Indian electricity market as it exists today.

With a second term mandate to govern, the Modi administration has wasted no time in putting together a 100-day action plan to reenergize and address structural issues affecting India’s power sector. The plan includes, among other things, a “power sector council” to synchronize and resolve central government versus state issues that are common in the country’s power sector (such as compliance with central government guidelines for tariff rationalization, reductions in aggregate technical and commercial losses, renewable energy purchase obligations, etc.) and the creation of a national power distribution company that can help ensure quality, around the clock electricity to all households in the next five years.

Despite the progress made under the first term of the Modi administration and the enthusiasm for additional reforms already evident in the second term, India’s electric power sector is still struggling. One of the most damaging features of the system is the inefficient markets design. Long-term bilateral power purchase agreements between utilities and power generators dominates the business of power procurement in India (approximately 87 percent) while the national power exchange only makes up less than 1 percent of the transactions. This prevents efficient price discovery in the market (with discoms forced to buy expensive, not cheap power), financially stressed assets, and renewable energy curtailment.

Currently, India’s state-owned utilities (discoms) have nearly $5.7 billion outstanding in dues to power generators. India also has approximately 66 GW of financially stressed power assets (including largely coal, gas, and hydro) to the tune of $43.7 billion as a result of lack of use because of a range of issues, including delayed payments by discoms and the current system of power procurement. These stressed assets place a tremendous burden on India’s financial system as banks and investors struggle to recuperate costs. This burden further increases the costs of new power projects as the interest rates for loans for new projects is higher than many other markets. Finally, renewable energy curtailment has been as high as 50 percent in states like Tamil Nadu in the past, and other states’ utilities also struggle to manage the variability of renewables and their energy demand. The problem will only be compounded in the coming years as the government believes it has the capacity to integrate a total of 500 GW of renewable energy into the country’s grid by 2030.

Even before the outcome of the election, India’s Central Electricity Regulatory Commission (CERC) proposed the creation of a national market for the purchasing of electricity from any generator to maximize resource efficiency, bring down costs of power procurement, and reduce renewable energy curtailment. If properly implemented, these series of reforms recommended by CERC could be some of the most important power sector reforms in India since the Electricity Act of 2003. They would not only help address India’s stressed power assets issue but also help India to reduce renewable energy curtailment and induct more of this variable energy source into the grid.


Benefits of a National Electricity Market for India

Currently 87 percent of India’s electricity is transacted through long-term (25-year) fixed contracts of power procurement between discoms and generators. To meet the majority of their daily power needs, discoms “self-schedule” generation from the portfolio of generators with whom they hold these long-term contracts. The remaining power is traded through bilateral transactions between utilities, through power exchanges and traders. The decentralized self-scheduled manner of power procurement between discoms and generators offers little visibility and therefore flexibility for discoms to choose from cheaper generators from outside their portfolio (see Figure 1 – based on this CERC publication). Absent this visibility and the ability to accurately anticipate and adjust for future demand, variable generation sources like renewables are often curtailed. 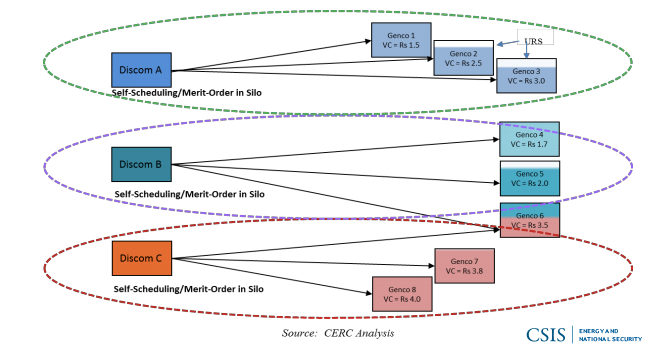 In a series of discussion papers, CERC lays out the framework for a national electricity market with day-ahead scheduling and real-time dispatch with synchronized ancillary services procurement to more effectively manage the power grid.  What would these series of steps do?

Undertaking this exercise is not going to be without its share of hurdles. State governments and their state-owned power generation, transmission, and distribution companies would need to be brought on board by the central government in order to pull off this feat. According to some, this would be akin to implementing an exercise like India’s Goods and Services Tax reform, which took nearly 20 years for the central government and states to negotiate. Additionally, throwing the switch on for such a market without having all the appropriate operational pieces aligned, including capacity of system operators to manage new software and much more detailed data would be a disaster. The more complex challenge will likely be the renegotiation of many of the long-term power purchasing contracts between generators and discoms or some other mechanism to ensure that generators investments are recuperated while the discoms don’t find themselves in a situation where tariffs are higher or the required quantity of power is unassured.

To aid in this effort, the central government is executing a six-month pilot that will leverage all the centrally regulated interstate generating stations and Power System Operation Corporation, or POSOCO, the national system operator, to see how least-cost dispatch model would work in India. The results of the pilot, in addition to the flood of comments from public and private sector stakeholders, will help refine the CERC proposals. While the reality is that the path for the implementation of these reforms is not simple, if implemented, a cohesive national electricity market will lead to a healthier, more resilient power grid that India needs. To be clear, these reforms alone will not fix India’s power sector. Other reforms, including tariff rationalization, are required to rectify one of the major power sector distortions hampering the growth of the sector. However, a sound market will further aid the administration’s new agenda to mitigate center versus state power sector conflicts, provide reliable quality power, safely induct more renewable energy into the grid, and ready the sector for large-scale deployment of new technologies such as energy storage and smart meters.

Kartikeya Singh is senior fellow and deputy director of the Wadhwani Chair in U.S.-India Policy Studies and senior fellow with the Energy & National Security Program at the Center for Strategic and International Studies in Washington, D.C.