Drastic times call for drastic measures. Since early June, China's stock markets have been in free fall, losing 29 percent of their value in three weeks. No matter that all of the lost value was originally gained in the first part of this year, particularly since April, this ranks up with other historic market corrections. In October 1987, the Dow Jones Industrial Average fell 23 percent, and in late 2008 it fell 54 percent. Between 2000 and 2002, during the bursting of the dotcom bubble, the Nasdaq Composite lost 78 percent of its value.

Fearing the continued erosion in its stock markets and the wrath of investors big and small, not to mention state-owned enterprises (SOEs) watching their balance sheets crumble before their eyes, Chinese authorities took a series of measures to stem the tide, including: suspending any new initial public offerings (IPOs), organizing securities brokerages to create an investment fund to soak up shares and have them commit to not sell shares while the Shanghai Composite Index remains below 4,500 points, having fund management firms promise to buy stocks, and ordering the country's social security fund to not sell any shares whatsoever. The only thing they could have done more drastic would have been to suspend trading altogether.

The result: Shanghai opened Monday up 8 percent, and although it declined throughout the day, ended up 2.4 percent, at 3,776. The Shenzhen and Hong Kong markets did not fare as well, falling a couple percentage points (see Fig. 1), but China has avoided the financial cliff for the foreseeable future. Some observers believe we may even be in for another modest bull run over the next few months. 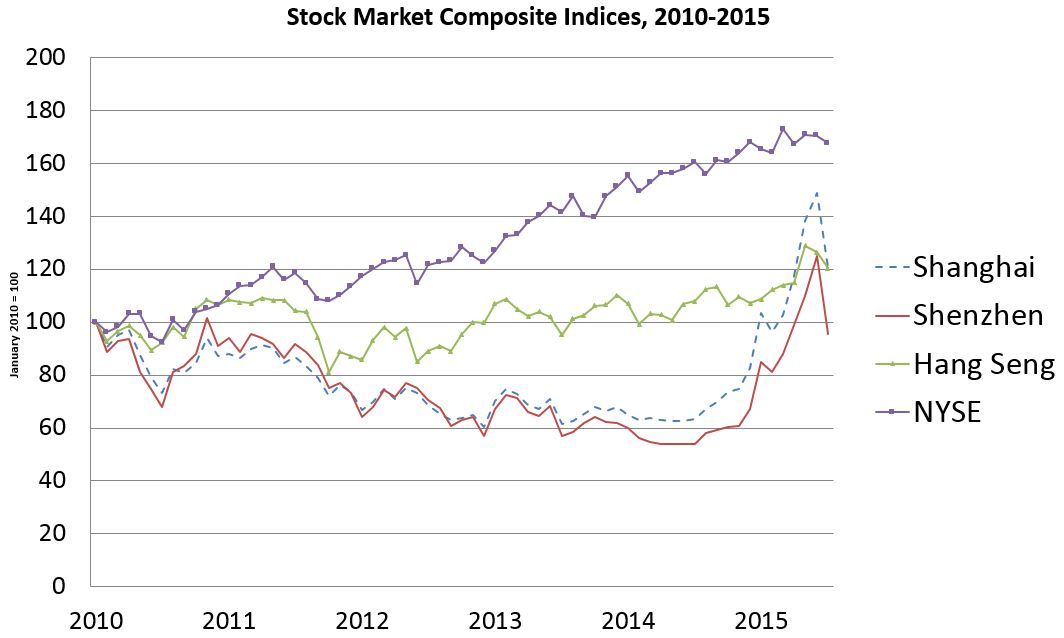 The intervention comes with some real costs that will not be easy to overcome. The scale and aggressiveness of these measures make a mockery of the leadership's claim to allow the market to play a "decisive role" in determining the allocation of resources and the direction of the economy. Granted China needed to avoid a full-blown crisis, but these actions reinforce the distinct impression that when push comes to shove, Beijing will always choose administrative intervention rather than markets, signaling once again to investors (and local officials) that they can take excessive risks because someone else (higher up the system) will always clean up the mess. Over the past two years, Beijing has started to permit corporate bonds to default as a way of signaling that there is genuine risk that issuers and investors need to heed. Breaking the vicious cycle of moral hazard necessary to have a financial system operate efficiently on a commercial basis is now that much harder, as the stock market rescue may reinforce the older lessons Beijing was trying to unteach.

The second dilemma is that the run up and down in the stock market is likely to leave a new pile of debt that has to be cleaned up. In order to divert funds away from real estate and spur a bull run, authorities have permitted much wider use of margin investing, where a large portion of purchased shares are financed through loans. Over a quarter of China's stock market capitalization is now supported through margin financing, turning an equity market into a de facto debt market. As the recovery in share prices is uneven, benefiting primarily listed SOEs, new bad debt will be added to the existing base of shaky bank loans and bonds. In 2015, IPOs have accounted for just over 3 percent of new financing (compared to over 80 percent through bank loans and the rest through bonds), but by mid-June total market capitalization of Chinese stock markets reached over $10 trillion, equivalent to the size of China's GDP, and over 40 percent higher than the market cap for Nasdaq. A stock market crisis is no longer a minor issue that can be cordoned off from the rest of the economy. And as China opens up its capital account further, and Americans and others gain access to China's securities markets, what is now a Chinese domestic problem could have a much more direct effect on the wealth of American investors and the health of the US economy.

The final challenge for Beijing to grapple with is how this volatility affects their broader plans for economic reform. This week China's leaders are reportedly meeting at the seaside resort of Beidaihe to discuss proposals for the next five-year plan. This plan is expected to integrate in a cohesive package a series of policies rolled out over the last two-plus years, among them lower but more efficient growth (the "new normal"), urbanization, "One Belt, One Road," "Made in China 2025," and others. Although a range of initiatives has been forthcoming, there are signs that the leadership's commitment to a comprehensive plan is slipping. SOE reform may end up focusing on a series of mergers of existing behemoths and strengthening Party control rather than partial privatization, opening up market access to private and foreign companies, and improving corporate governance. And the One Belt, One Road initiative may end up more as a way to export excess capacity than as a way to help other countries and China both move up the value-added chain.

If China were still run by the duo of Hu Jintao and Wen Jiabao, the betting here would be, that having barely avoided a meltdown, for the leadership to choose the superficially safe path of least resistance and pursue a conservative approach. But Xi Jinping and Li Keqiang have shown a stronger stomach for taking risks and embracing the potential benefits of change. Tightening control and liberalization both present risks, but as China's new leadership has repeatedly articulated, the old approach is best suited to an era which China is trying to move beyond.

2 reasons why China is still in lockdowns, more than 2 years after the pandemic started — and what it'll take for life to go back to normal
Insider | Huileng Tan
August 13, 2022
In the News

US Goes on the Offensive in Its China Tech War
Bloomberg | Chris Anstey
August 13, 2022
View all content by this expert