From Crisis to Inclusion: The Story of Venezuela’s Women

Humanitarian crises are never gender neutral, and the ongoing humanitarian crisis in Venezuela is no exception. Conflicts inherently affect women and men differently, and the Venezuelan crisis has had significant impacts on female Venezuelans inside and outside the country. Although girls and women have been disproportionately affected, little has been done to deliberately address gender-specific issues.

Women are also consciously left out of political decisionmaking positions in the country, thereby inhibiting any “day after” reconstruction plans from having a gender lens. This impacts Venezuela’s ability to rebuild as the demands of its female population will not be adequately addressed. The inclusion of women in political participation efforts will not only increase the chances of a lasting peace negotiation but will also better represent Venezuelan society in a government’s policies.

Challenges Inside of Venezuela

From higher levels of unemployment than men to poor access to education and health services, women often find themselves in disadvantaged positions in Venezuela. Historically, most Venezuelan women have worked within the home. According to a 2016 report by the UN Economic Commission for Latin America and the Caribbean, 54 percent more women than men between the ages of 20 and 59 do not participate in the labor market for family reasons, which poses an additional hurdle to female participation in the public or political sectors.

As the economic crisis in Venezuela worsens, many women find themselves unable to participate in the remnants of the formal economy given their lack of work experience. In fact, the latest census in Venezuela, conducted in 2011, highlighted an upward trend of women as heads of households, at 39 percent in 2011 as compared to 24 percent in 1990. With fewer opportunities for paid work, women are instead remaining at home. In 2020, Venezuela scored a 0.71 on the Gender Gap Index, meaning that women are approximately 29 percent less likely than men to have equal opportunities in education, the economy, and politics. Venezuela’s score has dropped three points since 2018.

From higher levels of unemployment than men to poor access to education and health services, women often find themselves in disadvantaged positions in Venezuela.

Venezuela’s collapsing public health system also affects women and girls disproportionally. A lack of effective policies for sexual and reproductive health, combined with the absence of family planning services, has altered women’s sexual and reproductive health choices. These conditions have impacted heath indicators, creating a rise in maternal mortality, teenage pregnancy, sexually transmitted infections (particularly HIV/AIDS), and unsafe abortions. Additionally, the scarcity of contraceptives, whose stock has decreased by 90 percent since 2015, only reinforces the existing gender gap by forcing women into their traditional roles as mothers and caretakers. Adolescent girls in school often do not have access to menstrual products, which impacts their ability to attend school. A crisis within the public health system has also compelled women to flee the country in order to give birth. Venezuelan hospitals and health centers lack not only medicine and basic medical tools and equipment but also well-trained medical personnel. The latest official statistics show that maternal mortality rates increased by 65 percent between 2015 and 2016.

Gender-based violence is on the rise in Venezuela and has only been exacerbated by the humanitarian crisis. Last year, there was a 50 percent increase in female homicides (femicides) from the previous year, despite a shrinking population. This year alone, 34 women have already been killed in domestic violence incidents. Many complaints of gender-based violence go unreported, and of those that are reported, many do not go to trial. Official statistics in 2014 show that only 0.7 percent complaints of violence against women went to trial, and it is likely that the impunity rate has worsened as the crisis has escalated. 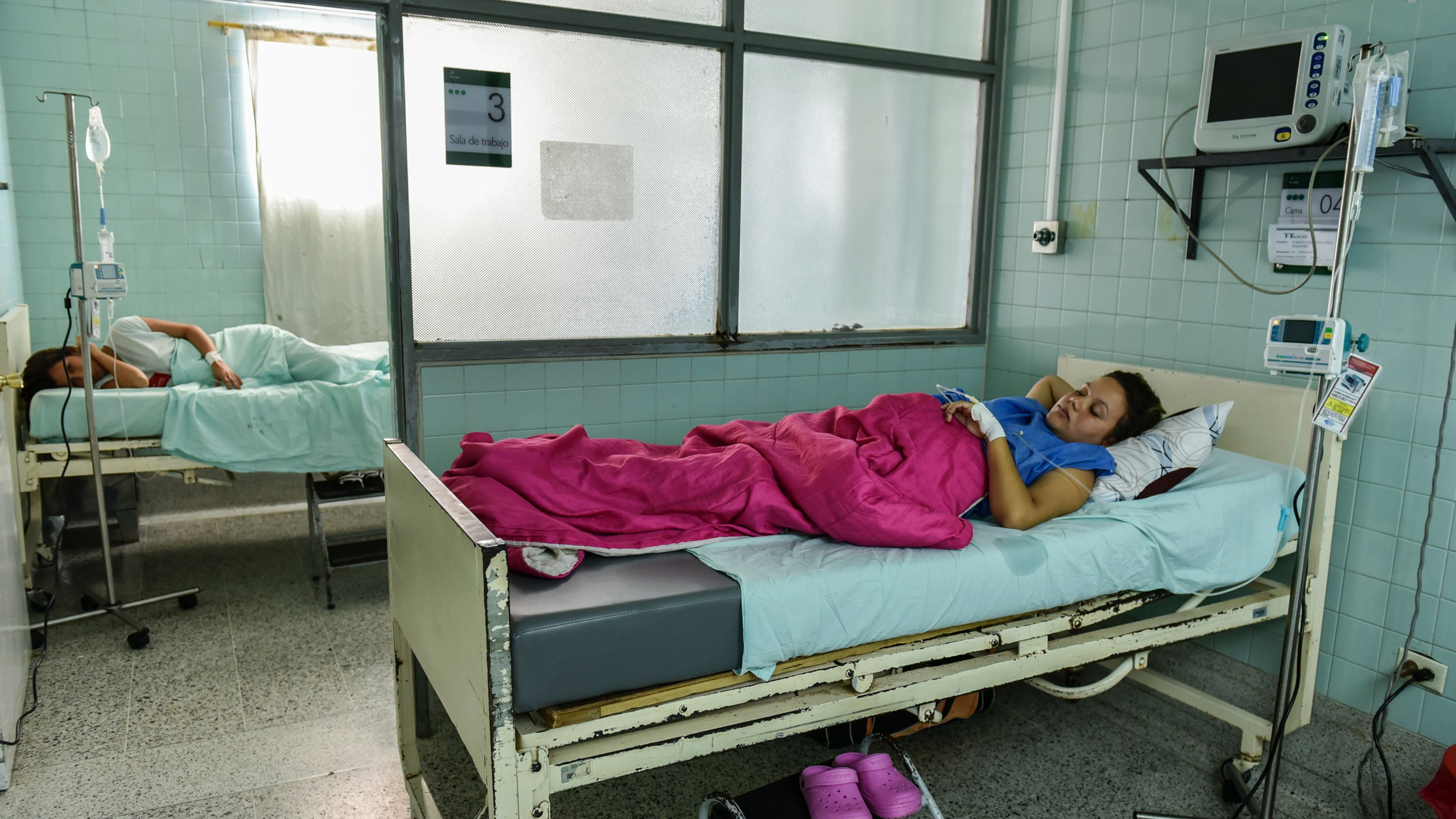 At least 40 percent of the over 5.3 million refugees that have fled the country are women, and they face unique challenges compared to their male counterparts when it comes to sexual violence and exploitation, vulnerability to human trafficking, and a lack of basic hygiene supplies.

Sexual violence, exploitation, and human trafficking are common threats for women fleeing the country. There have been multiple reports of sexual exploitation occurring in the Venezuelan regions of Zulia, Vargas, Anzoategui, and the Arco Minero in the Orinoco region. The presence of mining operations in the Arco Minero has had a distinct impact on indigenous women and girls, who face an increased risk of human trafficking. A trafficking and smuggling ring was discovered in the western state of Táchira, which borders Colombia, posing another risk for women and girls trying to flee. These dangers are still prevalent even once women manage to escape Venezuela. Reports of trafficking and sexual exploitation have arisen in various neighboring countries, including the Dominican Republic, Mexico, and Panama.

The presence of mining operations in the Arco Minero has had a distinct impact on indigenous women and girls, who face an increased risk of human trafficking.

As international humanitarian aid agency CARE noted, female refugees’ “often-illegal status in countries, along with high numbers of women travelling alone . . . increases their vulnerability to exploitation and abuse.” Over 37 percent of migrant women have reportedly experienced some form of violence, with many more unwilling to and fearful of reporting any sexual violence or exploitation because of the potential negative repercussions of their undocumented status, such as deportation. Some women turn to sex work, or transactional sex, as a survival mechanism and later find themselves exploited, unable to escape. Femicides against female refugees have also been documented at an increasing rate.

Although humanitarian aid has been addressing general health needs of refugees, many basic needs and supplies are not being provided to women. As is the case inside Venezuela, refugees lack hygiene products, particularly sanitary napkins, and many women have experienced infections due to not having access to suitable supplies. The United Nations Population Fund has distributed over 2,300 “dignity kits” to female refugees that include hygiene supplies, soap and shampoo, and information on where to find health and psychosocial support services. However, it remains one of few organizations that has appropriately identified and responded to the distinct challenges between male and female refugees. Many women also lack access to reproductive health care, including maternal health care, contraceptives, and other services crucial for female well-being.

Venezuela’s humanitarian crisis continues to deteriorate and impact the security and stability of the region. Neither the current Maduro regime nor the Guaidó government have a notable female presence at the table during important political discussions. When Venezuelan opposition members meet with international stakeholders, for example, men are often dominating in numbers and decisionmaking, leaving no room for a gendered approach to any agreement. Increasing women’s political engagement and participation can benefit Venezuela, especially as women’s physical security and gender equality correlate with broader peace and stability in other states.

Within Venezuela’s National Assembly, 19 percent of the deputies are female, constituting just 32 out of 167 total representatives. Plan País, an initiative of the Venezuelan National Assembly in charge of creating a reconstruction plan, lacks a gender perspective in its strategies. Of the 20 national deputies involved in Plan País, only 3 are women. A review of the various policies of Plan País reveals the lack of a gender perspective in their definition, which will affect the implementation of these policies once they are enacted. Both fundamental changes to increase female political participation as well as societal perceptions of women in politics need to improve.

The country’s humanitarian crisis has caused women to be at a significant economic disadvantage and has posed many societal risks for them, including greater exposure to gender-based violence, human trafficking and smuggling, and a detrimental lack of adequate health care. These challenges are also faced by female refugees, arguably in a larger capacity, as these females’ undocumented status poses both real and perceived obstacles for their protection abroad.

Neither Venezuelans nor the international community have appropriately identified or responded to these unique challenges faced by women. Placing a gender lens on Venezuela’s man-made humanitarian crisis does not only comply with international and human rights standards but can also benefit the outcome of policies and shape the international response for a more stable and prosperous Venezuela by including women in political positions.

Arianna Kohan is program coordinator with the Americas Program at the Center for Strategic and International Studies (CSIS) in Washington, D.C. Moises Rendon is director of the Future of Venezuela Initiative and fellow with the CSIS Americas Program.

The authors would like to thank Margarita Seminario, Betilde Muñoz, Alexandra Winkler, and Linnea Sandin for reviewing drafts of this commentary and for providing valuable insights for this piece.