Critical Questions: Youth on the Move

This year, the world marks International Migrants Day, December 18th, as historic numbers of people are on the move – toward cities, across borders and abroad. Urbanization is occurring at a record pace – especially across Africa and Asia. And, amid the wars and conflict in Syria, Afghanistan and Iraq the world is seeing the largest refugee crisis in Europe since World War II. By will or by force, they leave their homes, farms and nations in search of safety from war, protection from discrimination, better educational and economic opportunities and a better life for themselves and their families. Of increasing consequence to national and global economics and security, youth comprise a significant share of migrants. Among those seeking asylum in the European Union between January and August this year, more than half (55%) were aged 18-35; and a further 8% aged 14-17 (Eurostat). Arguably, however, the distinct needs, rights, and challenges of young migrants are dangerously underappreciated in, and absent from, current migration policy.

I have a “taken a look at youth migration” before, and believe this is a critical time to revisit and amplify our understanding of who, where, why and to what end of youth of the move.

Q1: What are the dominant trends of youth migration?

A1: Though economic distress and collapse had dampened Europe’s (especially southern Europe’s) appeal among international migrants, as noted above, young people from war-torn Middle East are not heading there in droves. More generally, the Global Migration Group reported in 2014 that youth aged 15 to 24 comprise approximately 12 percent of the world’s 235 million international migrants, with 43% under age 35. The data further suggests that the numbers are even higher among the most popular destination countries—where as many as a third or more of arriving migrants are youth.

At the same time, other emerging migration patterns continue to take shape: including that a number of countries that previously had high levels of emigration, including Argentina, Ireland, and South Korea, are now experiencing an influx of young migrants. More generally, nations displaying sustained economic growth and increasing prosperity maintain their ‘most favored’ status among the young, ambitious and upwardly mobile.

Q2: What are the consequences?

A2: This record setting youth movement opens up opportunities, but – as increasingly evident – it also poses significant challenges. In the case of graying Europe, the surge of young workers could alleviate pressures and limitations of its aging workforce. The European Commission estimates that more than a fifth of its population will be over age 65 by 2025; and they predict that Germany, Europe’s largest economy, will shrink from just over 81 million in 2013 to 70 million by 2060. Young migrants can also bring new ideas and entrepreneurial zeal to cities and their adopted homelands, sparking economic growth and urban renewal. And, remittances from more successful young migrants are a critical source of income (in some cases, the only source) for millions of families in poor communities and lower income countries; which are often invested in education and health or used to support other small business income-generating activities back home.

Yet, many voluntary and involuntary migrant youth – especially from rural or conflict affected communities – arrive with limited education and skills that make getting a job difficult. With high expectations for a better life, they can quickly become disillusioned when work is hard to find or pay is low. Young people frequently find themselves exposed to violence and health risks and without access to medical or legal services, places a social and economic burden on local governments and communities at large. Similarly, language, ethnic or religious differences and lack of networks can further isolate migrant youth.

Such an economic aspiration gap, when combined with social exclusion and limited awareness or protection for their rights, breeds inequality and makes migrant youths more vulnerable. As an increasingly evident result, instability and crime are on the rise in many destination communities and cities, fueling radicalization and terrorist attacks. For developing countries where a majority of international migrant youth originate, high rates of skilled migration (“brain drain”) remains a real concern, undermining economic growth. In Gallup’s Potential Brain Drain Index and Potential Net Youth Migration Index, lower income countries across North and Sub-Saharan Africa, Latin America, and the Balkans are at risk of some of the highest human capital losses.

Q3: Why are youth on the move in such historic numbers?

A3: For many youth today, the move is one of opportunity; but for an alarming number it is out of necessity. ISIS’ surge and the spread of violence and conflict are fueling historic movement across borders. They seek not only refuge and protection for themselves and their families, but the chance to return to school and find work. In addition, the global recession and youth unemployment crisis are driving record numbers of young people from their communities in search of improved job opportunities. Around the world, youth struggle to find decent and sustainable work; young people are up to four times more likely to be unemployed than adults. In hopes of better access to services and economic prospects, internal migration is fueling rapid urbanization—half of the world’s population lives in cities and UNHABITAT estimates this will reach 70 percent by 2050. In rapidly surging numbers, young people -- attracted by favorable wages, access to technology and perhaps a cosmopolitan life -- are leaving their villages and farms for the prospects of the city. Yet as hopes diminish at home, they may ultimately look abroad for more and higher-paying opportunities.

Surveys of young people have also shown that having fewer commitments, the ability to pick up and go, and knowledge of other countries undoubtedly contribute to the desire to move. At the same time, educational opportunity has long been a leading driver of migration; the number of foreign-born students enrolled in tertiary education increased fourfold from 0.8 million to 3.4 million between 1975 and 2009 per GMG. North America and Europe remain the top destinations for higher education, receiving some 70 percent of foreign university students worldwide.

A4: On the one hand, responding to youth migration means easing youth’s reasons or desire to move in the first place. This is of course easier said than done. The daunting, complex situation requires, among other short- and long-term development and security needs, creating dynamic economies with value added opportunities in agriculture or other rural sectors to dampen the pull of cities, and mitigating conflict while creating safe zones for refugees closer to home. At the same time, it is also clear that more strategic policies and programs to are needed to serve youth on the move. Governments and donors, in collaboration with civil society, must work to improve the conditions for migrant youth by strengthening policy and institutional environments, as well as to implement targeted need- and demand-based activities. To be effective, however, such policies require more specific data and greater sensitivity to and understanding of migrant youth’s aspirations and the multifaceted and unique challenges they face.

Certainly creating economic opportunities are important, but approaches should focus on fostering inclusion and belonging over exclusion and marginalization. Governments and society should increase and elevate dialogue with and meaningful participation by refugee and migrant youth at global and local levels, expand youth networks and coalitions with broader faith and ethnic minority communities. Young activists and social entrepreneurs can offer much needed vision, passion, and capacity to design and lead activities that best meet the needs of their peers.

Specifically, policy and program elements to support migrant youth could include could include: assessing and reducing the barriers to education and employment (which may include supplemental skills, language or other training); providing entrepreneurship support with increased access to finance; promoting safety and protection of rights via (language-sensitive) legal aid, hotline; strengthening peer, community, and mentor networks, and engaging migrant youth in volunteering and civic and cultural activities. Strategies to support urban or conflict affected migrant youth should have a focus on governance and addressing informality (70 percent of urbanites reside in slums, and upwards of 75% of youth end up working in the informal sector).

Nicole Goldin is principal of NRG Advisory, senior associate of the Center for Strategic and International Studies (CSIS), and professorial lecturer at George Washington Elliott School of International Affairs. She is on Twitter @nicolegoldin.

Most Recent From Nicole Goldin

Every Day Should be “World Youth Skills Day”
By Nicole Goldin
July 14, 2015
On Demand Event 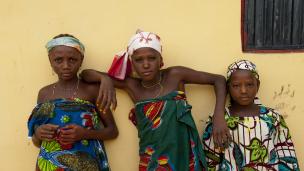 Backdrop Boko Haram: What We Should Understand about Youth in Nigeria
By Nicole Goldin
January 23, 2015
View all content by this expert