CSIS Brief: Beyond the Brink: Escalation and Conflict in U.S.-China Economic Relations

As the United States and China mark their 40th anniversary of formal diplomatic relations in 2019, the world’s most important bilateral relationship is increasingly defined by mistrust, competition, and uncertainty. After four decades of deepening economic integration, the talk in Washington today is about the extent to which the two economies will “decouple” over the years ahead. In a recent study, the CSIS Simon Chair drew on several different academic disciplines to model how an economic conflict between the United States and China could escalate and eventually de-escalate. Our findings suggest that economic conflict is likely to be an enduring feature of the U.S.-China relationship for many years to come. Until perceptions of relative costs in the two countries shift, Washington and Beijing seem set on a path of continued escalation, no substantial trade deal, and at least partial decoupling of their economies.

On July 6, 2018, the United States imposed tariffs of 25 percent on $34 billion worth of Chinese imports, launching the largest trade war in recent history. A year later, more than three-quarters of the $660 billion in two-way goods trade—an amount roughly the size of Thailand’s economy—was subject to tariffs. During that time, the United States also announced export restrictions for dozens of Chinese companies and designated Beijing a currency manipulator. The potential economic costs of the conflict, and any decoupling it prompts, are enormous, not only to the United States and China but to the entire global economy. Moreover, the trade war has elevated the potential for spillovers into other aspects of the relationship and the risk of great-power conflict.

Despite these risks, the United States entered the trade war relatively unprepared for such a confrontation, with only a vague sense as to how it could unfold. Without an appreciation of where the trade war may lead, the United States may find itself weakened in economic, diplomatic, and security terms, without achieving significant policy changes in China. Most importantly, policymakers risk miscalculating and stumbling into a new Cold War—or worse.

We launched this project to help U.S. policymakers navigate the complexities of a trade war with China. To do so, we began by developing a model for the likely dynamics of how a trade war might escalate. We applied various game theoretical concepts to help explain decision-making processes and escalatory pathways in the U.S.-China economic conflict. We primarily relied on two interrelated theories to model escalation in a bilateral trade war: deterrence and compellence theory and bargaining theory. Each of these concepts simplifies complex, strategic interactions between two or more agents into a framework to help inform decision-making. Bargaining theory describes how parties decide to divide a set of goods between themselves, often using leverage or threats. Theories of deterrence and compellence study how agents induce opponents to refrain from or take certain actions, either by threatening force or by denying them a necessary resource. Although these concepts were created to analyze kinetic warfare, they can be applied to economic conflicts by changing some key assumptions.

We created an original model that synthesizes these theories to explain the core decision-making logic of economic conflict, discussed in part two of this chapter. The predictions of our model depend primarily on each country’s appetite for risk and perceived knowledge about their adversary’s resolve to endure pain. If both countries have a high appetite for risk or underestimate their counterpart’s ability to withstand economic pain, our model predicts escalation. If both countries have a low appetite for risk or have a clearer sense of their opponent’s resolve, our model predicts agents would be more likely to avoid escalation and seek agreements early on.

An Example of The Classic Bargaining Theory of Conflict 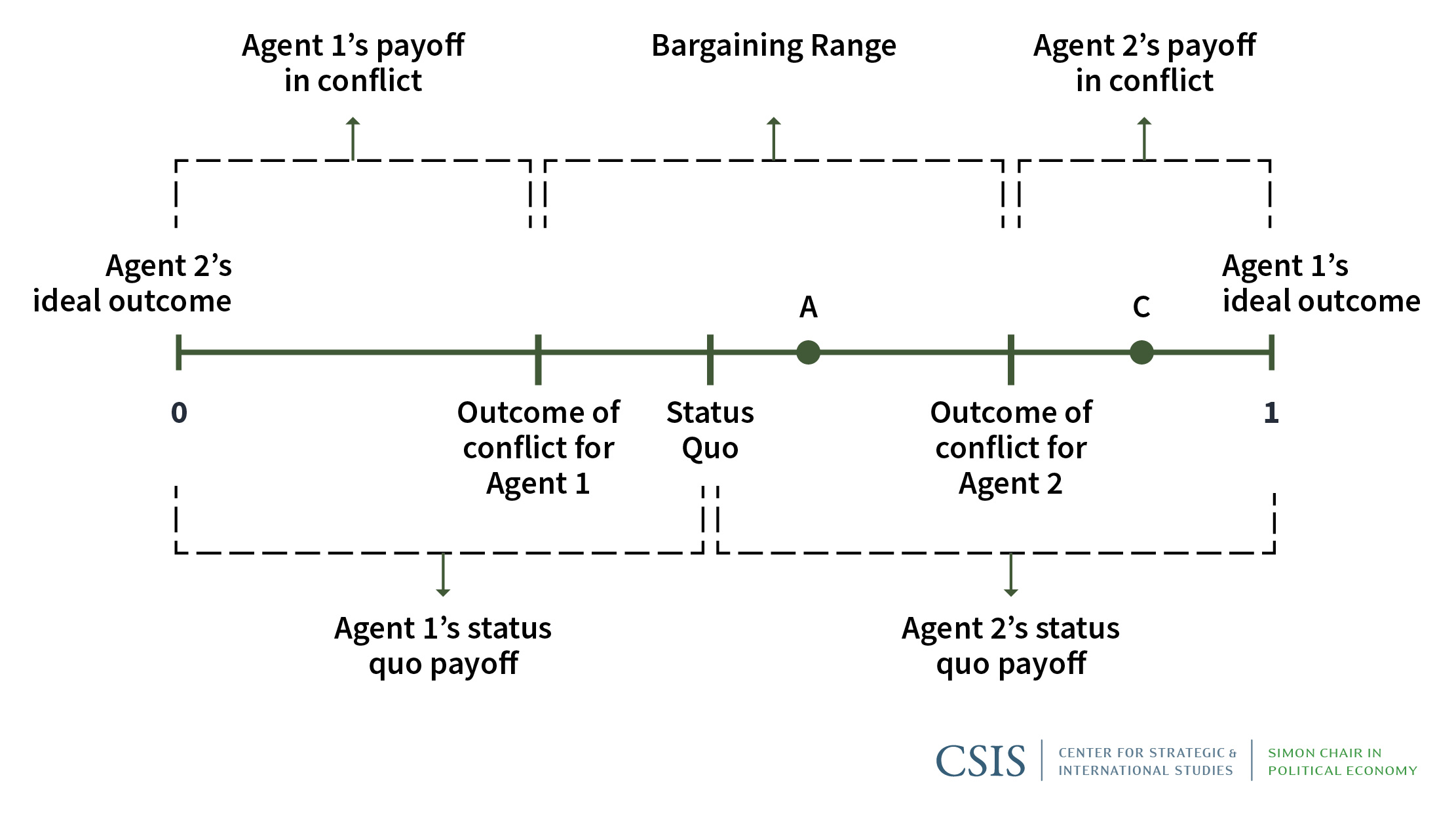 These theories can help determine the dynamics of strategic interactions in the U.S.-China trade war, but they have their limits. No model can perfectly reflect or account for the complexity of the real world, and any predictive model will have its caveats. Still, these methods offer a valuable theoretical basis for analyzing complex topics and understanding how conflict develops.

Dimensions of Escalation in Economic Conflict 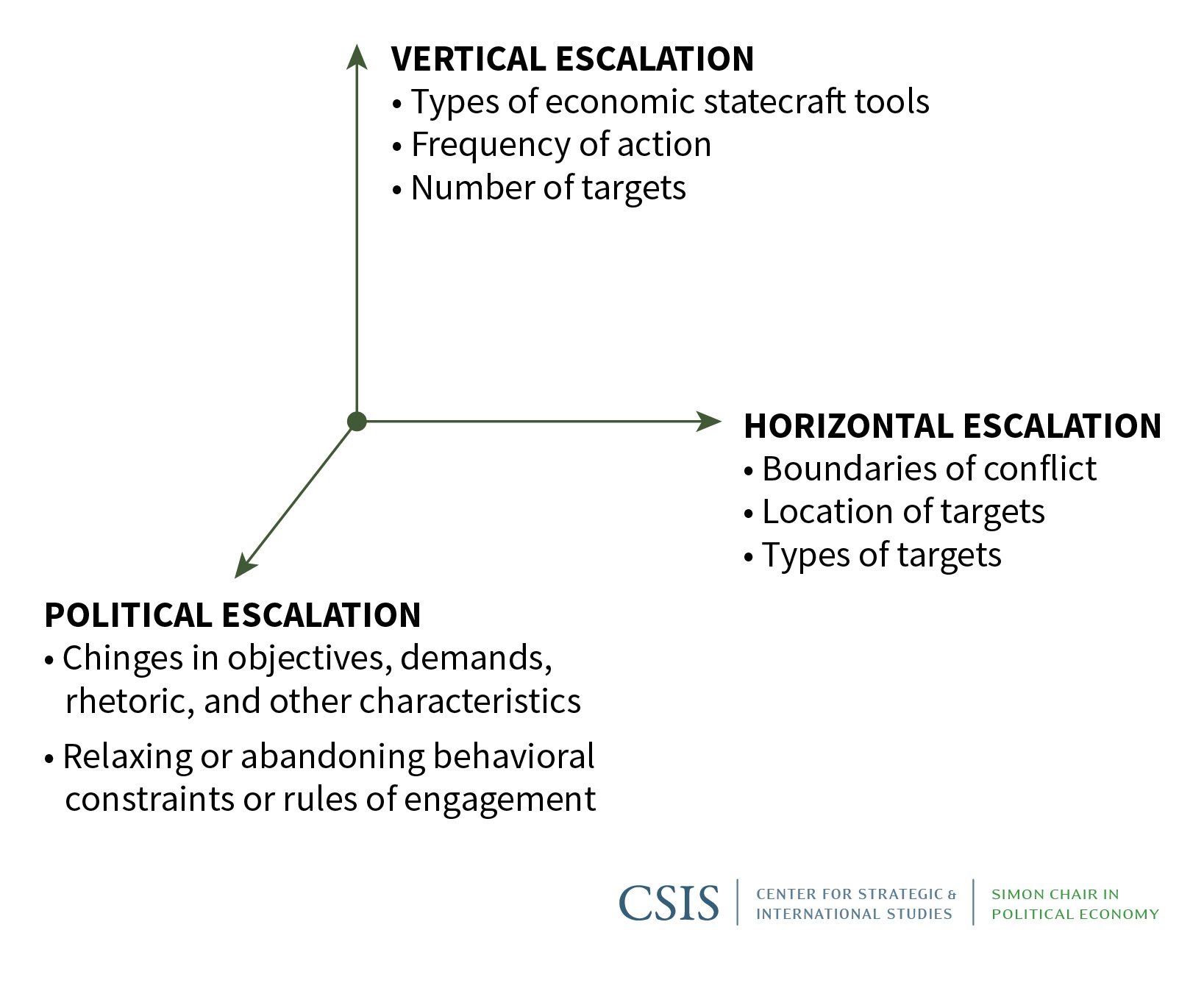 Figure based on Morgan et al., Dangerous Thresholds, p. 20. and has been modified to apply to economic conflict.

TOOLS OF A TRADE WAR

Game theory is helpful to understand the broad strategic logic and escalation dynamics of economic conflict, but it cannot explain the use of specific actions at the tactical level. While our model can predict escalation or de-escalation, it does not anticipate which tools of economic statecraft each side will deploy. A more complete understanding of these tools, including associated costs and use cases, will help U.S. policymakers better apply strategic pressure and understand Chinese responses.

We group tools of economic statecraft into three broad categories: (1) outbound economic actions, which are further divided into three sub-groups, including actions compliant with international law, actions compliant with national law, and informal, extralegal actions; (2)multilateral coalition building; and (3) domestic interventions.1 These categories each have different associated impacts and use cases, which are outlined in this chapter. Although it is impossible to rank tools ex ante in terms of impact—for example, a tariff could be applied to $1 billion of goods or $100 billion—each category of tools has distinct economic costs. Countries may simultaneously deploy tools from different categories, which may or may not be part of a coordinated strategy of escalation or de-escalation.

Coalition Building: Examples include bilateral or plurilateral economic agreements and coordination with other countries to use outbound economic tools.

Domestic Interventions: Examples include fiscal support for sectors disrupted by economic conflict and government initiatives to reduce reliance on the adversary’s economy.

The tools used in economic conflict impact the nature of escalation and the degree of economic damage. Outbound economic actions have the highest likelihood of retaliation and the greatest potential to cause economic harm but can quickly apply pressure. Coalition building and domestic intervention tools have much lower costs and risks of contagion but take longer to deploy. A successful strategy will balance the use of tools from each category to minimize collateral damage while maintaining pressure.

Having designed our model and inventoried the tools of economic statecraft, we used simulations to test our model and study which tools would be used in an escalating trade conflict. We ran two separate one-day simulations in the spring of 2019 involving different groups of American experts on the U.S.-China relationship and trade policy. The simulations helped us understand how Washington and Beijing approach economic conflict, which tools had the most strategic value, and possible escalatory pathways of a prolonged trade war.

The bottom-line result of both simulations was that the U.S. and Chinese negotiating teams failed to reach an agreement. In the first, China threatened to walk out of final negotiations after a complete breakdown in trust. In the second, the two sides reached a limited consensus on some issues but could not agree on specific policy decisions. In each case, the United States acted as the aggressor, steadily escalating pressure on China to make concessions. The Chinese side adopted a defensive posture, trying to support domestic growth and development while reducing reliance on the U.S. economy. 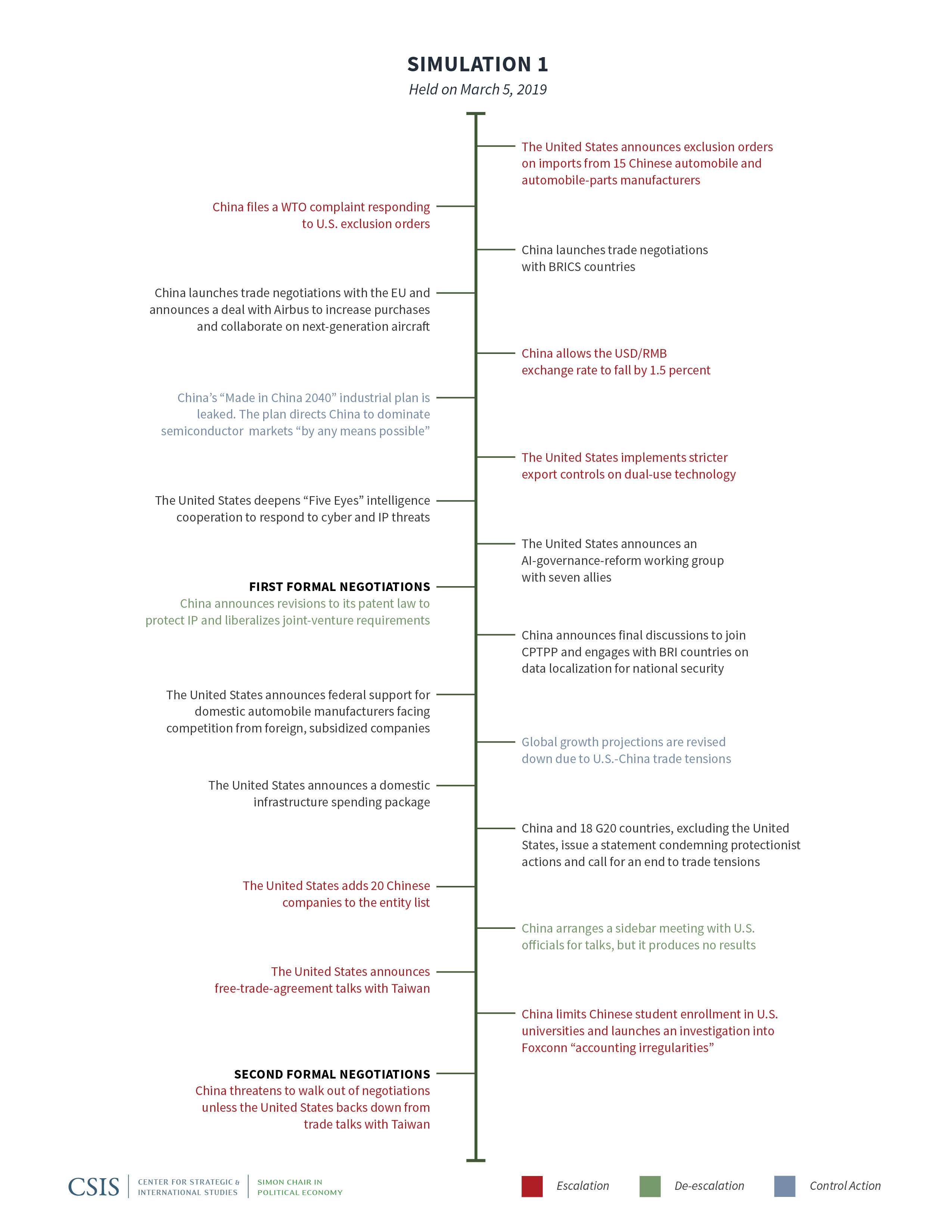 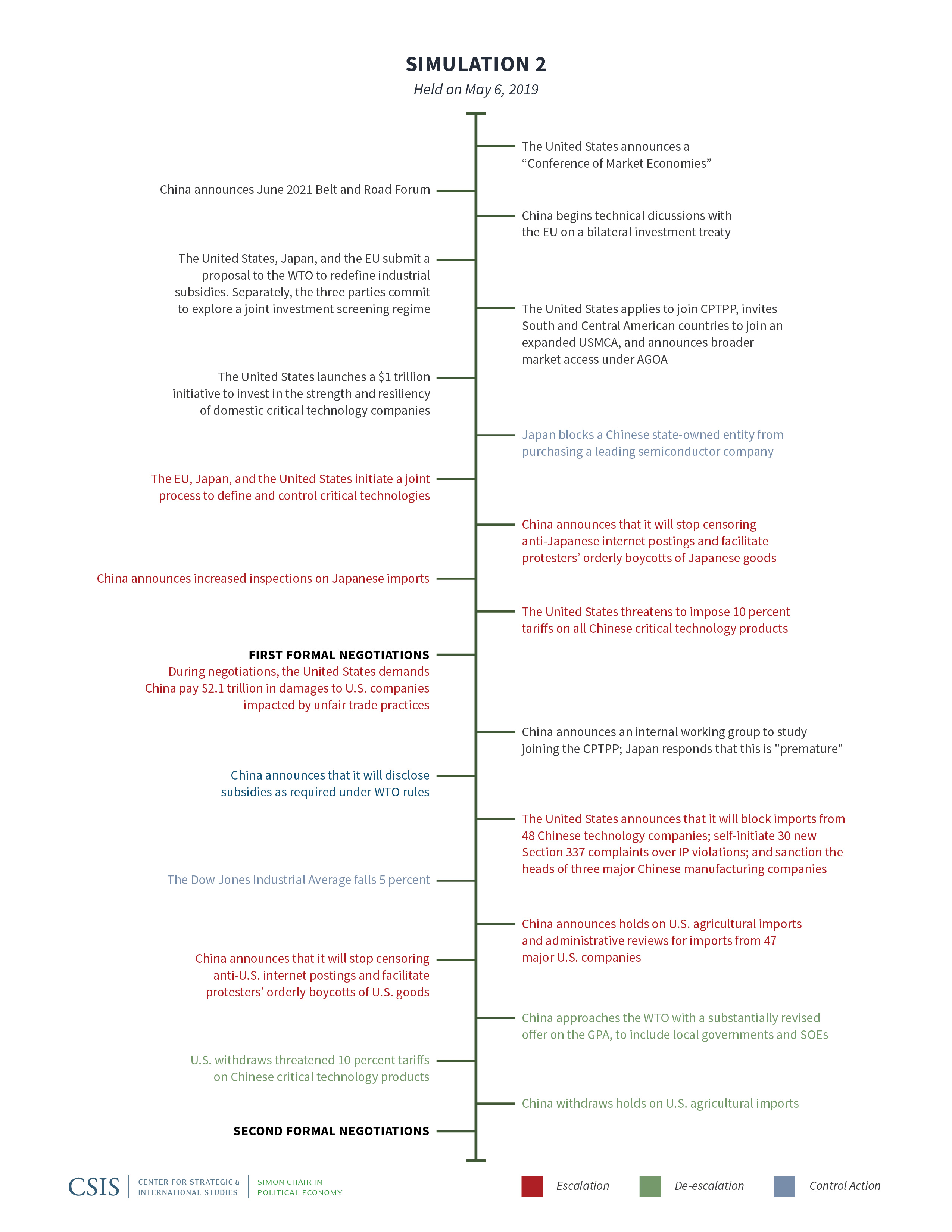 Despite the challenges inherent in modelling economic conflict, our model was validated to a surprising extent by both our simulations and real-world developments. The project produced several findings that were both unexpected and relevant to policy:


All of this suggests that economic conflict is likely to be an enduring feature of the U.S.-China relationship for many years to come. Until perceptions of relative costs in the two countries shift, Washington and Beijing seem set on a path of continued escalation, no substantial trade deal, and at least partial decoupling of their economies.

Reflecting on the findings of our project in light of the real-world U.S.-China trade war, we derive a few recommendations for U.S. policymakers seeking to engage in successful economic bargaining with China:

This brief is made possible by the generous support of the Smith Richardson Foundation and Alcoa Foundation.