The European Trilateral Track 2 Nuclear Dialogues, organized by the Center for Strategic and International Studies (CSIS) in partnership with the Royal United Services Institute (RUSI) and the Fondation pour la Recherche Stratégique (FRS), have convened senior nuclear policy experts from the United Kingdom, France, and the United States (P3) for the past 13 years to discuss nuclear deterrence, arms control, and nonproliferation policy issues. By identifying areas of consensus, the group seeks to improve collaboration and cooperation among the three nations across a range of challenging nuclear policy concerns. The majority of the experts are former U.S., UK, and French senior officials; the others are well-known academics in the field. Since the Dialogues’ inception, currently serving senior officials from all three governments have also routinely participated in the discussions.

The United States, the United Kingdom, and France hold common values and principles directed toward a shared purpose of sustaining global peace and security, as well as an understanding of their respective roles as responsible stewards of the nuclear order. While each of the three nations has unique perspectives and policies regarding nuclear issues and the nature of today’s security environment, as the three nuclear weapons states in the North Atlantic Treaty Organization (NATO) alliance, they play a unique and enduring role in the stewardship of international alliances and partnerships, especially in matters of nuclear deterrence, nonproliferation and arms control.

In 2021, the group’s discussion addressed a range of growing challenges in the international security environment and beyond, prompting the group’s Track 2 participants to issue this statement reflecting their consensus after two rounds of meetings (one virtual and one in person). Moreover, recent events in Ukraine, including Russia’s violent cross-border aggression, endangerment of nuclear power sites, and blatant nuclear saber-rattling drive home the inescapable risks of war that occurs under a nuclear shadow and the enduring importance of close collaboration and solidarity of the United States, the United Kingdom, and France as responsible nuclear weapons states and NATO alliance members. All signatories agree to this statement in their personal capacities, which may not represent the views of their respective organizations.

Faced with China’s expanding strategic capabilities and increasingly aggressive regional posture, all three nations recognize the challenge that China represents and the need to direct greater attention and resources to the Indo-Pacific region. And yet, Russian bellicosity and aggression across the European theater, including the invasion of Ukraine, a direct ascent anti-satellite test, widespread gray zone efforts at influence and subterfuge, and expanded strategic military systems, make clear that the European security architecture remains at considerable risk. This competitive security environment—in which Russia and China separately are utilizing multidomain and multilayered strategies and highly interrelated strategic military technologies—challenges the P3 to sustain common perspectives and collaborative approaches, a challenge unfortunately complicated by the way in which the AUKUS security arrangement and the U.S. withdrawal from Afghanistan were announced. At the time of publication, the crisis in Ukraine continues to unfold with serious humanitarian and security implications. The group will address these in our upcoming meeting.

The increasingly multinodal, multidomain nature of the strategic threats posed by China and Russia calls into question some traditional approaches to deterrence, driving broad reassessments of deterrence concepts and approaches. These reassessments are especially noticeable in the United States and the United Kingdom, where efforts to strengthen and adapt deterrence through enhanced cooperation also raise questions about the role of ambiguity and transparency in nuclear force posture and declaratory policy. The U.S. concept of “integrated deterrence” and the UK Integrated Review reflect new thinking on how to deter adversaries at all levels and in all domains, not just the nuclear one. The development of strategies to address existing threats, which are augmented by new domains such as cyber and space, and the need to address advanced technologies that shorten warning and decisionmaking timelines are critical. While France has not adopted the same terminology as the United States and the United Kingdom, it has de facto adopted many similar practices, particularly with regard to more closely integrating domains of cyber and space across planning and operations. However, evolving concepts of deterrence will need to be developed in concert with allies with whom deterrence and defense are a shared responsibility. Particularly in matters of declaratory policy, linguistic differences surrounding the use of “deterrence” in public discourse by members of the P3 should be addressed. This will entail continued consultation and dialogue with French counterparts for whom “deterrence” refers mostly to nuclear deterrence and who could view “integrated deterrence” concepts as inconsistent with decades-old French principles.

The question of how to implement new strategies within each state, and subsequently among the P3 and more broadly in NATO, will need to be addressed and the balance between commonality and autonomy among our national positions carefully considered. The group raised concerns that an integrated strategy should emphasize joint operations across all domains and levels of conflict. Adapting strategies to meet the realities of a more competitive security environment today is essential, but the group stresses the importance of alliance cohesion in the development and implementation of such plans.

The Importance of Allies and Partners and Extended Deterrence

The deteriorating security environment underscores the importance of allies and partners and the centrality of extended deterrence in the European security context. It is essential to navigate the current crisis with Russia in ways that unite rather than divide the alliance and prevent Russia from preying on fissures and gaps between allies, most notably in matters of nuclear posture and burden sharing. Although the new German government has reaffirmed the dual-capable aircraft role and is actively seeking a replacement aircraft for the aging Tornado, continued debates on the U.S. nuclear weapons based in Europe must be anticipated. As views in Europe change, it is possible we will see a rise in rhetoric that opposes conventional and nuclear burden sharing and offers different perspectives on the roles and responsibilities needed for collective defense. The P3 and NATO should continue to intensify efforts to increase the level of understanding regarding nuclear deterrence, arms control, and strategic stability in their own nations and within each of NATO’s 30 nations. This will build a broader base of support for the NATO nuclear mission so that governments can discuss nuclear issues with the public.

In the Indo-Pacific region, the 2021 AUKUS security partnership, which among many other things, would see U.S. and UK assistance to Australia to build nuclear-powered submarines, is an important step toward enhancing cooperation between like-minded states and expanding cooperation on a host of technologies among the United States, the United Kingdom, and Australia. Although the lack of French consultation prior to the announcement of the partnership might have been a missed opportunity to engage more meaningfully on issues in the Indo-Pacific and created tensions within the P3, representatives seem ready to move on from these events constructively. Furthermore, the P3 should work to mend any bilateral and multilateral tensions. While we do not believe AUKUS presents any direct proliferation risk, we are concerned that if not properly implemented, the deal could set a negative nonproliferation precedent that other states might seek to exploit. Australia, the United States, and the United Kingdom should take the opportunity, in cooperation with the International Atomic Energy Agency, to develop a model of safeguards for naval nuclear propulsion that would set a solid precedent for other states seeking nuclear submarines in the future.

With respect to the ongoing U.S. Nuclear Posture Review (NPR), it was clear that questions of whether the United States should or will adopt a new declaratory policy on nuclear weapons figured prominently in the group’s discussion in 2021 and remain a looming concern for allies and partners. Any change to declaratory policy or nuclear force posture in the forthcoming U.S. National Defense Strategy (NDS) or NPR must be made in close consultation with allies and partners who depend on U.S. security assurances and without undermining the credibility of NATO’s deterrence. The group anticipates the forthcoming U.S. NDS and NPR and will offer a post-review reaction when it holds its next meeting.

The Non-Proliferation Treaty’s (NPT) Review Conference, originally slated for April 2020, continues to be deferred due to the Covid-19 pandemic. The NPT, along with the broader nonproliferation regime it engendered, has had remarkable success to date in limiting proliferation and helping to ensure 75 years of nonuse of nuclear weapons and strategic risk reduction. It remains the bedrock of global nonproliferation and nuclear restraint. And yet, questions about its future role in the international system persist. The 2015 review conference ended without a final consensus document. And while the document should not be the ultimate measure of conference success or sustainability of the treaty, failing to reach a consensus, coupled with repeated pandemic-related delays, could have implications for the future vitality of the review conference process.

At the same time, the Treaty on the Prohibition on Nuclear Weapons (TPNW), which entered into force in January 2021, will convene its first review conference later this year. Pressure is building on a number of alliance partners to attend the conference as observers, and a growing recognition that the TPNW will remain a fixture on the world stage is prompting reconsideration and recalibration of how states under the nuclear umbrella engage with and speak about the treaty. Even as the P3 may seek to moderate anti-TPNW rhetoric, this group continues to believe that the NPT review conference can continue to offer an official space to socialize norms, language, and people between governments and civil society.

The signatories of this statement also continue to support efforts to achieve bilateral arms control agreements between the United States and Russia, especially those that address nonstrategic nuclear weapons and advanced delivery systems. We recognize the difficulty of achieving such progress while balancing continued Russian regional aggression and its history of violating existing arms control measures. Moreover, the group recognizes that future arms control must evolve and adapt to account for China’s increasingly competitive posture and the growing need for structural or consultative roles for allies. Nevertheless, arms control remains an essential complement to deterrence when used to support strategic stability by improving crisis management, managing arms racing, and reducing nuclear risks writ large. Admittedly, today the prospects for such agreements appear bleak, but in the aftermath of crises, opportunities can emerge. It is imperative that the P3 stand ready to seize such an opportunity should it present itself.

The group also notes with concern that negotiations with Iran, designed to chart a path to reinstating the Joint Comprehensive Plan of Action (JCPOA), seem to have reached an impasse. The way forward is unclear, but the group supports joint P3 measures taken to prevent Iran’s acquisition of a nuclear weapons capability and to address concerning actions in the region. Over the years since its initial agreement, this group has supported the JCPOA with the recognition that while flawed, the agreement represented the best possible path to limit Iran’s nuclear ambitions. The group continues to support negotiated limits on Iran’s nuclear capabilities, but we recognize that the window for such an agreement appears to be rapidly closing.

This report is made possible by the generous support of the National Nuclear Security Administration. 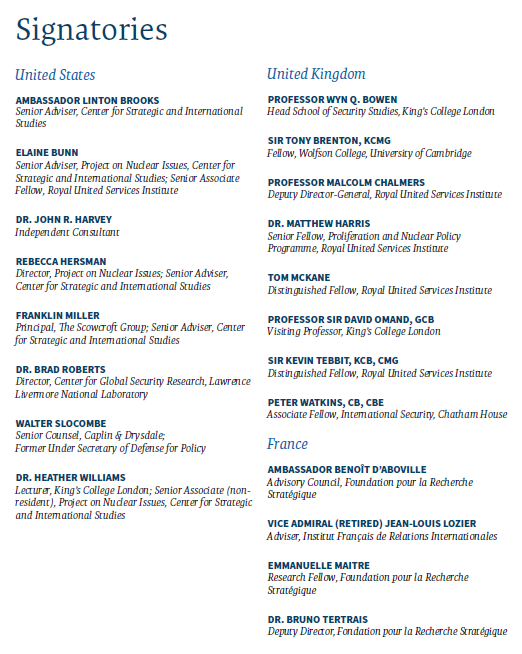