Curtailing Russia: Diplomatic Expulsions and the War in Ukraine

A special plane took off from France on April 16. Onboard were dozens of Russian nationals, accompanied by their relatives, who have been declared “persona non grata” by the French government in response to Russia’s brutal war against Ukraine. Since the beginning of the invasion, many European states, together with the United States, have expelled Russian diplomats at an unprecedented rate, especially after the initial reports of Russian war crimes in the city of Bucha. At the time of writing, over 450 Russian embassy employees have been expelled since February 24, most of them from European countries.

These massive diplomatic expulsions are primarily aimed at demonstrating to Moscow the U.S. and European resolve to leverage every tool available to impose costs on Russia’s war of aggression. These decisions were also designed to complicate Russia’s malign activities across Europe, as most of the expelled employees were suspected intelligence operatives and were therefore a potential threat to conduct operations to destabilize EU and NATO countries from within.

Yet, these expulsions are not without limitations and could have some negative countereffects. Moscow has already announced tit-for-tat expulsions which will limit the West’s ability to better understand the internal dynamics in Russia. This wave of expulsions has also illustrated some concerning divergence among NATO and EU members, chief among them being Hungary, which refused to join this effort. Such signs of disunity should be watched closely as Europeans embark upon an era of persistent confrontation with Russia that will require sustained cohesion and resolve.

An Unprecedented Wave of Expulsions

Diplomatic expulsions have long been discrete affairs. Generally, the objective was to quietly counter illegal activities pursued by intelligence operatives under diplomatic cover, without poisoning larger bilateral relations. The recent dramatic rise in Russian malign activities has nonetheless compelled NATO and EU countries to change their approach and use diplomatic expulsions as a policy tool to hinder Russian operations and push back against Moscow. The Novichok poisoning of Sergei and Yulia Skripal in the United Kingdom in 2018 and the Czech Republic’s conclusion last year that Russian intelligence services were responsible for the deadly 2014 warehouse blast therefore resulted in coordinated and public expulsions of Russian embassy personnel. While sharing similar features with these past experiences, the expulsions in response to the war in Ukraine by U.S. and European governments constitute a fundamental change in scale. 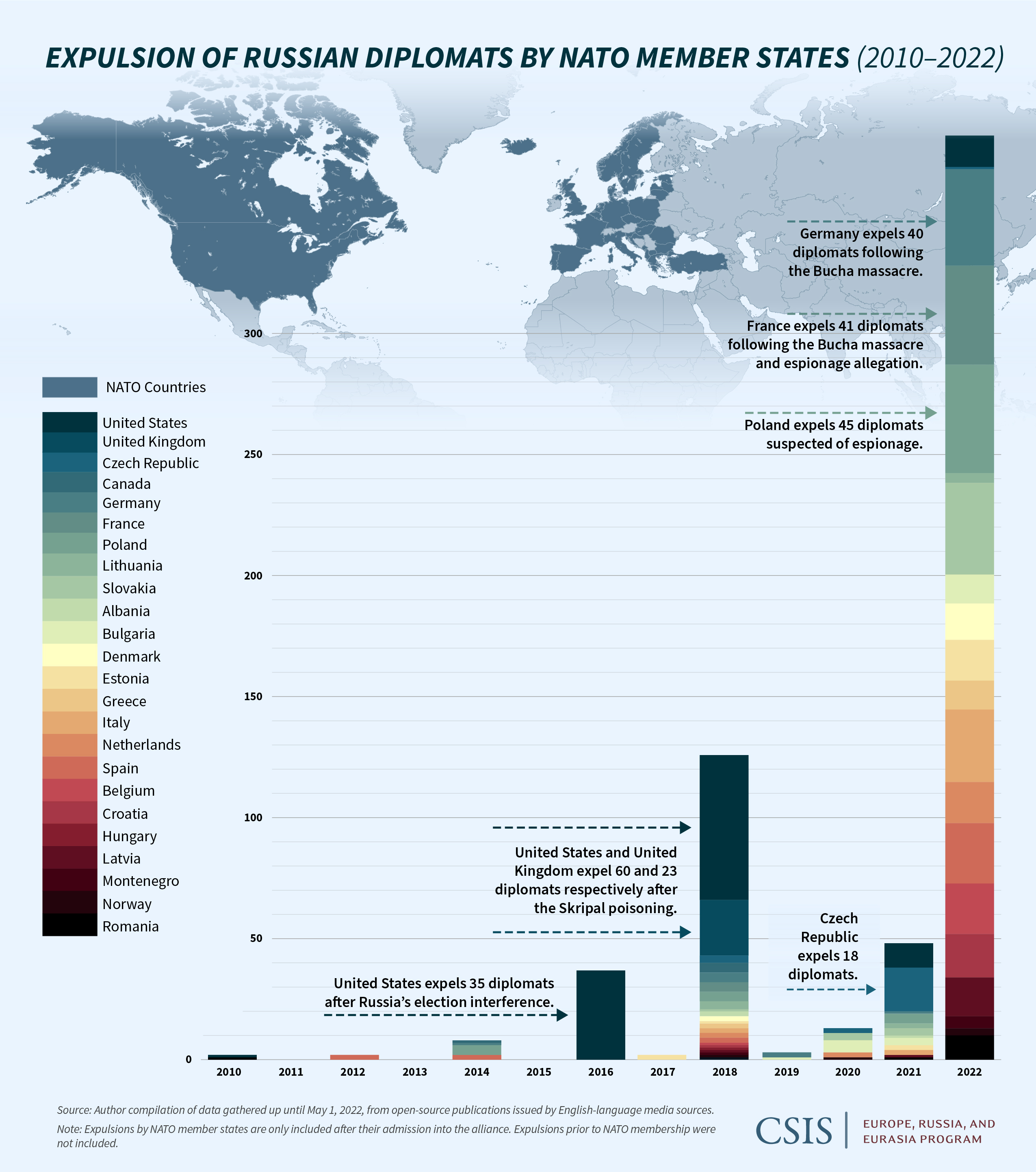 In contrast, within two months of Russia’s latest invasion of Ukraine, over 25 EU and NATO members expelled in a coordinated fashion over 400 Russian diplomats. Poland, Germany, and France have led the charge by expelling over 40 personnel each, compared to less than 5 staff in earlier waves. If 21 NATO countries took part in the collective expulsions in 2018, and even fewer in 2021, then 2022 has seen the largest and most expansive effort: only roughly a handful of the 30 members declined to join the wave—some of them, like the United Kingdom, because they already expelled a large number of Russian diplomats in previous waves. 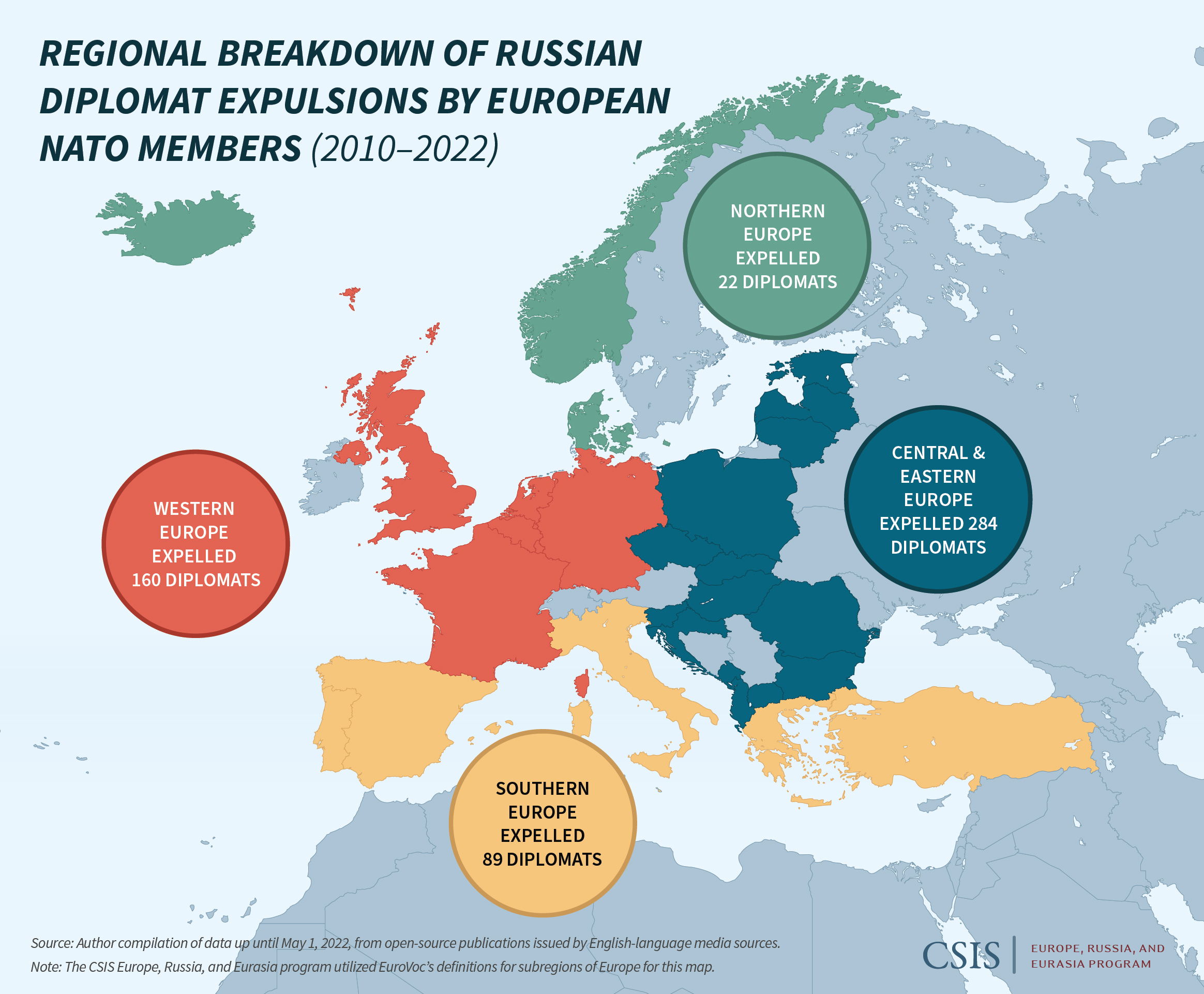 Another new development is that the European Union expelled 19 Russian diplomats from Brussels this year as a protest against Russia’s atrocities in Ukraine. NATO did not expel Russian diplomats this time as the work of Russia’s mission to NATO was already suspended by Moscow in October 2021. This decision came amid growing tensions with the alliance, with NATO withdrawing the accreditation of eight Russian diplomats, thus halving the number of the Russian mission personnel. Earlier in 2018, NATO had already reduced the size of the Russian mission down from 30 to 20.

Finally, this wave is marked by yet another change: the involvement of Japan. Back in 2018, Japan was the only G7 country that decided against expelling a Russian diplomat, trying to hold on to a delicate balancing act between Russia and the G7 in the hopes that Russia’s pull toward Beijing could be tempered. However, on April 8, 2022, Japan’s leadership announced the expulsion of eight Russian diplomats and trade officials saying that Moscow must be held accountable for “war crimes” in Ukraine. According to Prime Minister Fumio Kishida, Russia’s actions were in “severe violations of international law and absolutely impermissible.” This decision was followed by strong economic measures, which included ban of imports of Russian lumber, sanctions against Russian banks, and asset freezes of 400 individuals and groups, as well as an agreement to gradually reduce its energy reliance on Russia.

The first goal of these collective diplomatic expulsions has been to signal to Moscow the resolve and unity among Europeans to confront Russia. Most of these expulsions were notably decided amid public outrage over atrocities reportedly committed by Russian armed forces in a number of occupied Ukrainian cities, notably Bucha. These decisions further demonstrate that diplomatic expulsions are no longer quiet affairs taking place behind closed doors. They are now done in public and used as a diplomatic weapon to impose a political cost on Russia.

These expulsions are part of a larger diplomatic effort to isolate Russia on the international stage. At the impetus of a large coalition of countries opposed to Russia’s war of aggression, Moscow has been either suspended or expelled from various international institutions or bodies, from the Council of Europe to the International Labor Organization, or most recently, the UN Human Rights Council. Likewise, resolutions condemning Russia’s brutal invasion have been successfully adopted at the United Nations but also in other strategic multilateral fora like the International Organization of La Francophonie.

Another critical objective of diplomatic expulsions has been to curtail Russia’s malign activities. A significant number of “diplomats” housed in Russian embassies are known to be active intelligence operatives acting under diplomatic cover. By declaring hundreds of those intelligence officers “persona non grata,” European countries are clearly seeking to disrupt Russia’s espionage and disinformation operations, especially in central and Eastern European states where Russian malign influence is perceived as acute. Some European nations explicitly identified intelligence officers among the expelled Russian personnel, even though the true number of intelligence operatives is believed to be higher. France publicly declared that 6 of the 41 expelled Russian diplomats were specifically accused of acts of espionage, following a long investigation by the French intelligence services.

Expelling so many Russian intelligence operatives is an important defensive action by the West. Russia will almost certainly seek to hit back at the West for its support for Ukraine and for sanctions, just as the Kremlin did successfully following 2014. Therefore, degrading Russia’s capacity to conduct malign operations now, before it conducts an operation rather than waiting until after, demonstrates the West has learned from Russia’s past operations. These expulsions will also have long-lasting effects on Russia’s clandestine activities as European countries are unlikely to consent, in a near future, on the replacement of the expelled agents.

A Bumpy Road Ahead

There are several risks associated with these expulsions as the tit-for-tat retaliation is expected, if not guaranteed. By May, Moscow has already expelled more than a 100 diplomats combined from the United States, Japan, and several European countries. In addition to the support embassies and consulates provide to citizens of their respective countries, diplomats are governments’ eyes and ears and provide important political information to their capitals. Canada’s prime minister Justin Trudeau aptly explained the conundrum facing governments: Although “Russian diplomats in Canada are not being helpful” and “are pushing pro-Putin propaganda,” Canada nevertheless has to “weigh the negative of that against the positive of having extraordinary Canadians in Moscow who are giving us feedback on what the Russian people are doing, connecting with civil society and understanding and supporting Canadians and others who happen to be in Russia at this time.” Understaffed embassies must sharply limit their services, including emergency services for their citizens and the processing of immigrant visas. Furthermore, the smaller an embassy or consulate becomes, the harder it is to open or maintain channels of communication. Avenues to negotiate, report incidents, or avoid miscalculations shrink even further. Coupled with the dismantling of Russia’s independent media, it becomes even more difficult to understand the events on the ground in Russia.

This wave of expulsions is also revealing the divergence among Europeans in their approach toward Russia. Even though most European countries decided to expel Russian embassy employees, some of them refused to follow suit. Within NATO, this is notably the case of Hungary or Turkey. While Ankara’s decision to stand aside can be explained by its difficultbalancing act between Russia and NATO, the position of Viktor Orbán’s Hungary is more concerning. While Budapest did not object to the initial firm response by the European Union and NATO to Russia’s war of aggression, Hungary is starting to resist any additional steps against Moscow. Budapest has notably made clear that it would oppose new sanctions on Russian oil and gas. As the war in Ukraine is likely to last months if not for years to come, Europeans should pay close attention to these early signs of divergence that could endanger the European Union’s and NATO’s strategies to confront Russia.

The United States and its European allies and partners have engaged in yet another unprecedented wave of diplomatic expulsions and are working even more closely together to impose costs on Russia for its aggression. These expulsions are an effective tool to both express disapproval with Russia’s actions and impede its malign activities in the West. Disrupting Russia’s malign intelligence efforts through expulsions could severely complicate and curtail Russia’s ability to hit back at the West for sanctions and support for Ukraine. But it is not without downsides. Russia’s tit-for-tat retaliation is limiting U.S. and European ability to understand the evolving situation in Russia. Furthermore, decisions surrounding expulsions have showed growing disagreements among EU countries on the way ahead. Despite these limitations, the message sent to Moscow remains clear: in addition to its military assistance to Ukraine, the West will leverage every diplomatic tool available to confront Russia.

© 2022 by the Center for Strategic and International Studies.All rights reserved.

Europe , Russia , Defense and Security , and Geopolitics and International Security