Decoupling Kabuki: Japan’s Effort to Reset, Not End Its Relationship with China

Through a series of speeches and tough actions, the Trump administration has clearly signaled that it views a Xi Jinping-led China as an existential threat to the West, and hence, is trying to mobilize its friends and allies to form a united front against Beijing. Washington can point to a growing chorus of frustration at China expressed by countries throughout the Indo-Pacific and Europe. One sign that such worries are translating into action is the recent announcement by the Japanese government that it is distributing $653 million in subsidies to 87 companies to relocate from China to Southeast Asia (30 projects) or back to Japan (the other 57). Although hugely symbolic, it would be a mistake to conclude that Japan has signed on to a campaign to economically decouple from China. Washington needs to better understand Tokyo’s actions and adapt its own approach if it wants a true partnership with Japan in managing the China challenge.

Japan has long been skeptical of China. China is viewed unfavorably by a whopping 85 percent of the Japanese public, far outstripping even skeptical Americans (66 percent as of April 2020). Tokyo is particularly worried about Chinese mercantilism and its extremely aggressive high-tech drive. At the same time, Japan also has an enormous economic relationship with China, with two-way trade in goods in 2019 totaling over $300 billion. China is now as large a market for Japanese goods as the United States. And cumulative Japanese investment stands at over $130 billion. 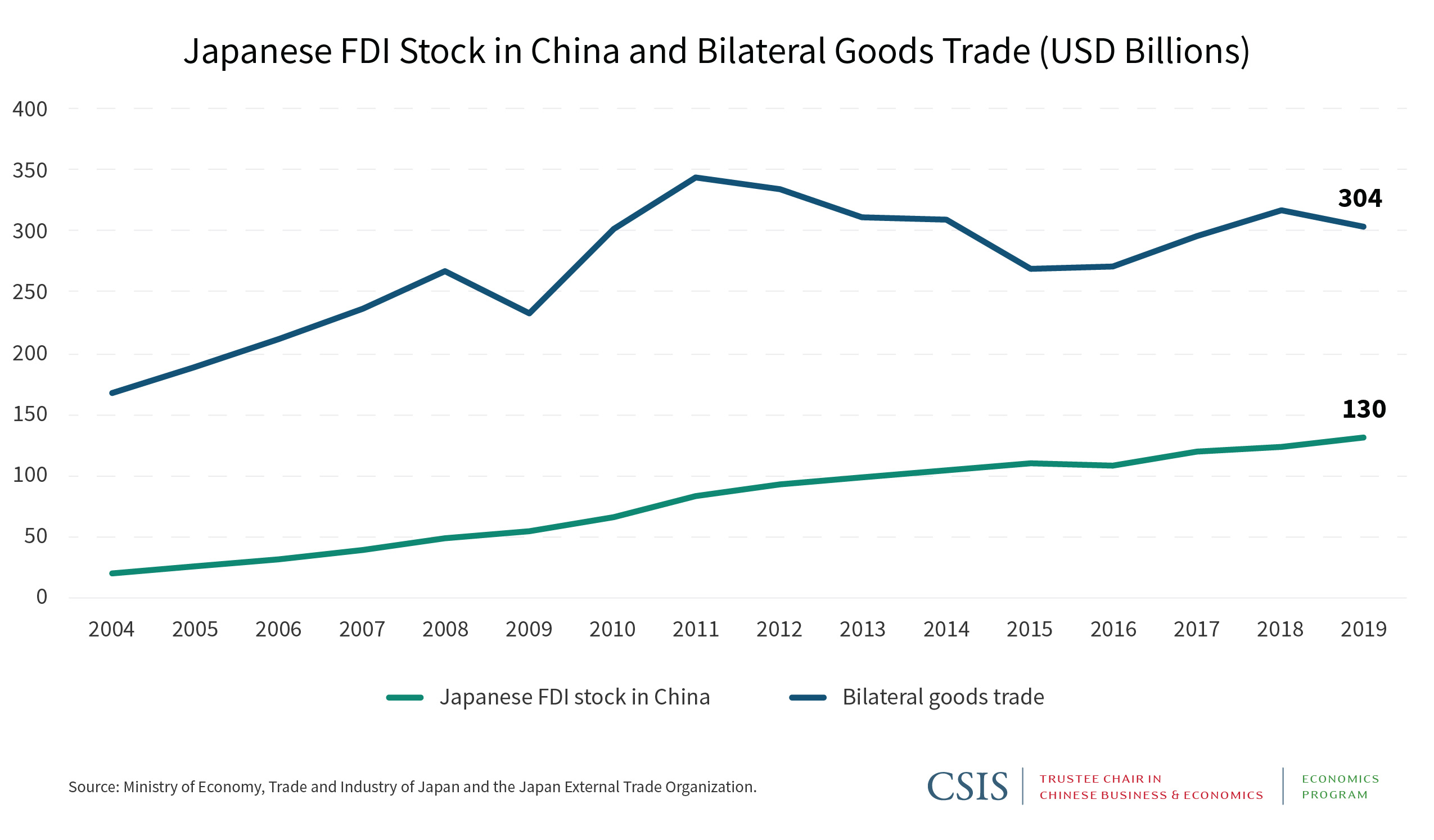 Japanese policy toward China recognizes this complex reality. Japan aims to balance its deep worries about Beijing with the benefits from having a constructive relationship. Hence, Japan is focused on mitigating as much as possible the risks that come from having such extensive economic ties. It has joined the United States and European Union in greater coordination on export controls and investment restrictions, and on challenging Beijing’s industrial policies, and Tokyo has banned Huawei from the country’s 5G mobile telecommunications networks.

The effort to encourage Japanese firms to move projects from China may be viewed as the first act in a longer decoupling drama, but that interpretation would miss the real story that is unfolding. Instead of cutting off ties, Tokyo’s goal is to diversify supply chains, make them more resilient, and be less dependent on China while also encouraging greater manufacturing at home to address a slowing economy.

A perusal of the list of companies receiving aid shows that the great majority are small and medium-sized enterprises, not major Japanese manufacturers with extensive investments in China and around the world. In addition, a substantial proportion are in two sectors, medical equipment and chemicals, where investment may be overly concentrated and there was already a logic for moving some production elsewhere.

Tokyo’s announcement may spur concerns in Beijing and celebrations in Washington, but observers should not get carried away. These adjustments will affect barely 1 percent of total Japanese investment in China. As with firms from other countries, most Japanese are in China for the Chinese market, which for many is the largest source of revenue and profits. Even with China’s gradual slowdown over the last few years and the prospects for even slower growth over the next decade as it grapples with its demographic transition and substantial debt, the expectation is China will have growing needs for high-tech infrastructure and an expanding consumer market. A survey released by the Japan Bank for International Cooperation (JBIC) in late 2019 of Japanese companies’ overseas activities shows that although India is now the number-one prospect for expanding investment over the next three years, China is still second. That is why major Japanese manufacturers have continued to announce new projects in China. For example, last month Toyota announced that it is setting up a joint venture with five Chinese companies to develop fuel-cell powered commercial vehicles in China because the market prospects are so high. If Toyota were heeding the calls of Washington, it would not be expanding investment in China, let alone sharing technology in such an advanced sector.

In sum, U.S. policymakers shouldn’t get too excited about Japan’s relocation scheme, which is more akin to a Kabuki actor raising his eyebrow to great dramatic effect rather than a major scene change. It represents a minor course correction, not a fundamental shift on China.

If the Trump administration wants more from Tokyo, it needs to take several steps:

There is plenty of scope—and a pressing need—for the United States and Japan to work together to manage the challenges of a stronger and more assertive China. Trying to enlist Tokyo in a concerted effort to decouple is a fool’s errand.

Scott Kennedy is senior adviser and the Trustee Chair in Chinese Business and Economics at the Center for Strategic and International Studies (CSIS) in Washington, D.C. Matthew P. Goodman is senior vice president for economics and holds the Simon Chair in Political Economy at CSIS. Mariko Togashi, CSIS Economics Program research intern, assisted with the data collection for this analysis.