Army contract spending took the brunt of the cuts during sequestration and the defense drawdown but has been growing at a slow but steady rate the last two years. This brief examines trends in what the Army is buying, how the Army is buying, and whom the Army is buying from, using data from the Federal Procurement Data System (FPDS). This analysis provides critical insights into understanding the dynamics in the Army’s industrial base as it pursues its “Big Six” modernization programs, establishes the Army Futures Command, and reorganizes itself toward Multi-Domain Operations.

2018 was a year of significant change for the Army as it sought to reorient itself toward restoring tactical overmatch against strategic competitors like China and Russia. Given the challenges presented by these strategic competitors, the Army needs to transform its approach to acquisition and started to do so in 2018. At the start of the fiscal year (FY), the Army released a new modernization strategy centralized around six priorities that best aligned with the Army’s emerging Multi-Domain Operations operational concept.1 Furthermore, the Army reorganized its acquisition structures and processes in pursuit of its new modernization strategy, making some of the biggest changes to the Army’s structure since the 1970s.2 The Army established cross-functional teams to lead the development of each of its Big Six programs and created a new four-star command, the Army Futures Command, to oversee all elements of Army modernization.3

It will take several years for the Army to fully reorient itself and transform its acquisition system. Some initial signs of change are already reflected in the Army’s contracting trends. Using the methodology used in other CSIS reports on federal contracting, this paper, a part of DIIG’s annual Acquisition Trends analysis, examines the trends in what the Army is buying, how the Army is buying, and whom the Army is buying from, using data from the Federal Procurement Data System (FPDS).4

For this paper, CSIS focused on the following questions:

WHAT IS THE ARMY BUYING?

The Army contracting data show significant increases in contract spending in FY 2018 in many of the platform portfolios most closely aligned with the Army’s Big Six modernization priorities. 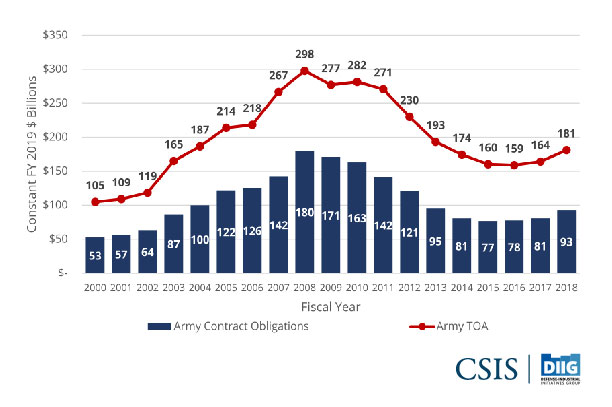 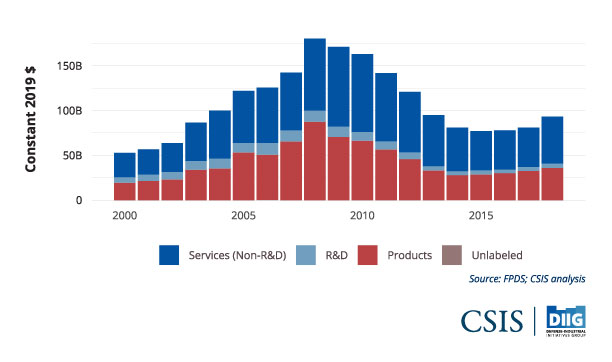 Army Ordnance & Missiles contract obligations, the platform portfolio most aligned with the Army’s top modernization priority (Long-Range Precision Fires), increased 3 percent in FY 2018 after growing 79 percent between FY 2015 and FY 2017.6 Although the Army’s Ordnance & Missiles contract spending slowed down in FY 2018, the Army still spent $0.66 billion more than it averaged annually from FY 2000 to FY 2017. 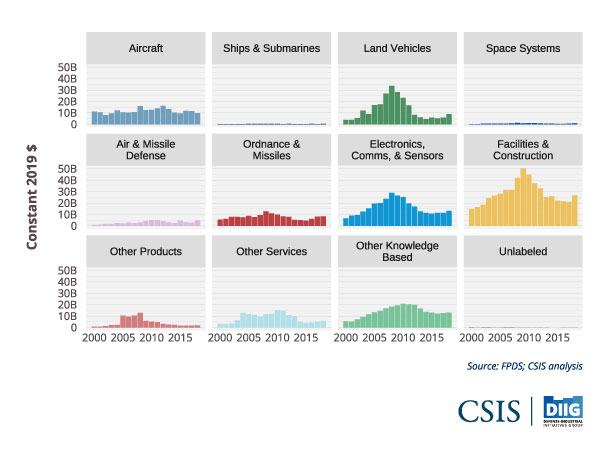 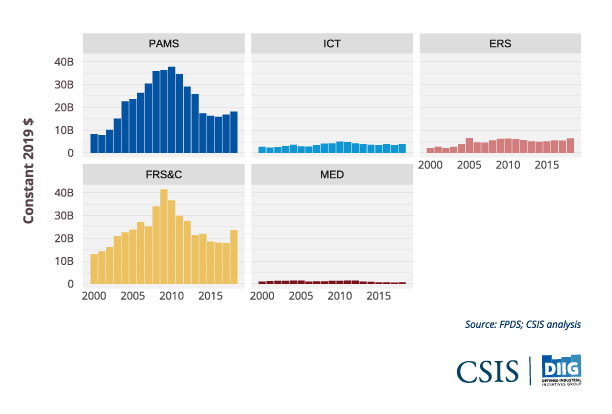 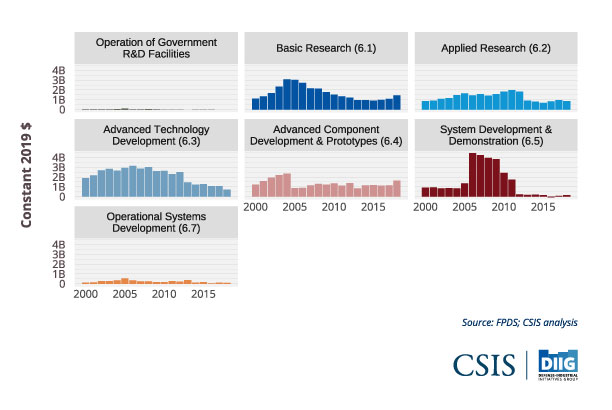 Army Aviation contract obligations declined 16 percent in FY 2018. Although the Aviation platform portfolio most closely aligned with the Army’s third-ranked modernization priority (Future Vertical Lift), these trends are not driven by the FVL program, given the source of the decline and FVL acquisition program timelines. The two largest efforts comprising FVL—Future Attack Reconnaissance Aircraft (FARA) and Future Long-Range Assault Aircraft (FLRAA)—are now in the prototyping phase and are not planned to enter production until 2024 and 2028, respectively.7 Neither existed in their current form in FY 2018. More detailed analysis of the FPDS data show that the declines in Army aviation contract spending were concentrated in the procurement of Products connected to the existing legacy aircraft fleet, with Army Aviation R&D and Services related contract spending increasing. 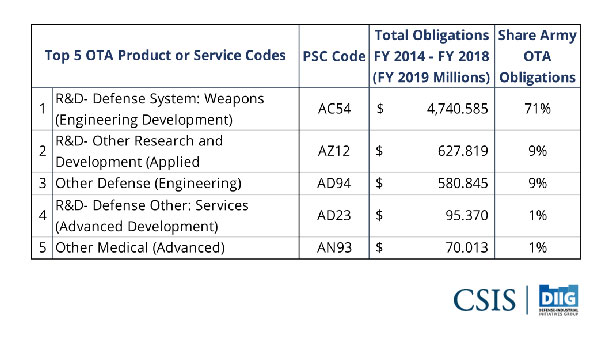 IS THE ARMY’S R&D PARADIGM HANGING?

The data show that although the Army’s R&D contracting portfolio continues to make slow but steady progress in recovering from the substantial cuts suffered during sequestration and the defense drawdown, growth has been uneven across the pipeline, and overall Army R&D contract spending remains below historical levels.

The Army’s R&D contracting portfolio has shown some signs of recovery, but the Army’s paradigm for its development pipeline for major weapon systems might be undergoing an evolution given that “the Army has been at the forefront of DoD’s Other Transaction Authority (OTA) resurgence.”9,10 The Army was already using OTAs before the recent legislation encouraging greater usage, but it has seen a 348 percent increase in OTA obligations over the last three years.11 As shown in Figure 6, 96 percent of Army OTA obligations awarded between FY 2014 and FY 2018 went towards R&D activities. Combined Army OTA and R&D contract obligations totaled $7.7 billion in FY 2018, approximately $0.8 billion less than historical averages this century but much higher than the $4.9 billion in R&D contract obligations. Combined Army OTA and R&D contract obligations have also been increasing at a faster rate than the total growth in Army contracting, increasing 28 percent in FY 2018 and 52 percent
between FY 2015 and FY 2018.

Analyzing the OTA data by Product or Service Code (PSC) demonstrates, as shown in Table 1, that most Army OTA obligations go toward the development of major weapon systems. Given that DoD’s OTA authority was historically designed to help enable prototyping, it is not surprising that the predominant majority of Army R&D OTA obligations were awarded for Advanced Component Development & Prototypes (6.4) activities, with Advanced Technology Development (6.3) a distant second. These trends are likely to continue in the years to come because the Army plans to heavily leverage OTAs and other rapid acquisition authorities to develop many of its Big Six modernization efforts using competitive prototyping competitions. While Congress has given DoD the authority to award follow-on production contracts using OTAs, it will be several years before the Army is prepared to award those big money follow-on production contracts. 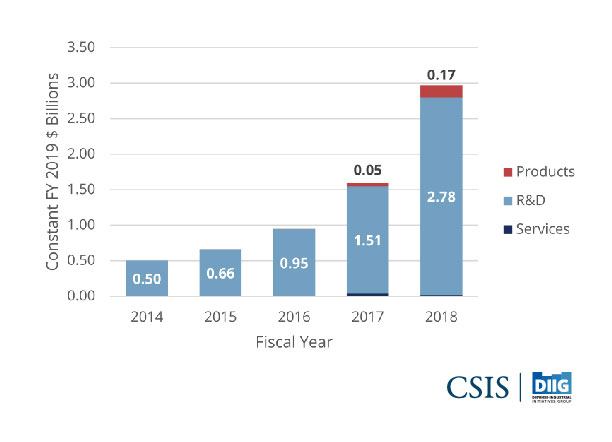 HOW IS THE ARMY BUYING IT? 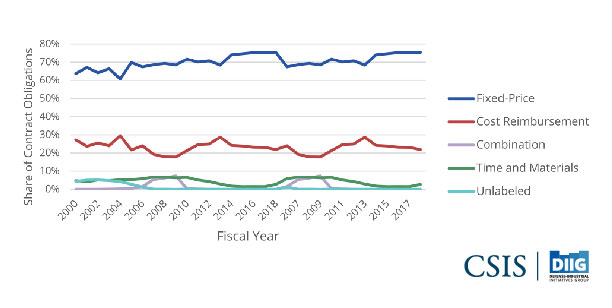 WHOM IS THE ARMY BUYING FROM? 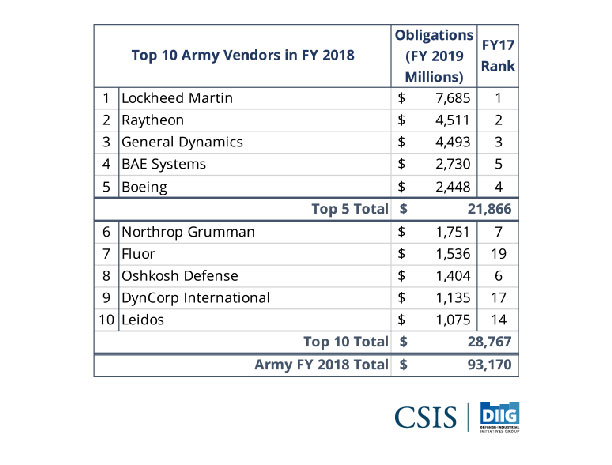 Although Medium-sized vendors were the largest beneficiary of the total growth in Army contracting, there were notable differences in vendor size trends across the three areas of Army acquisition (Products, Services, and R&D). 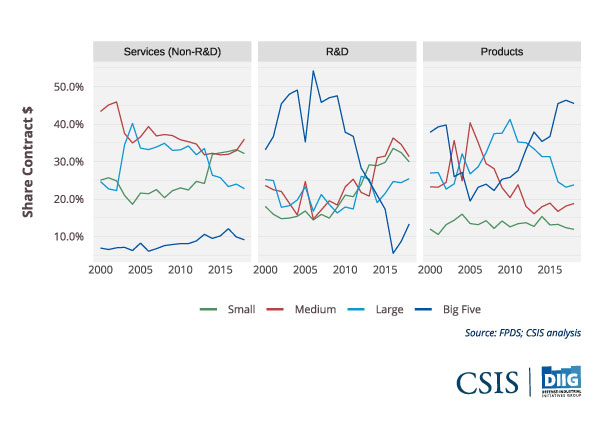 Table 2 shows the top 10 Army vendors ranked by contract obligations in FY 2018. Unlike in previous years, there were no changes in the vendors comprising the top 5 Army vendors, but there was some shakeup in their positions.

Lockheed Martin (1), Raytheon (2), and General Dynamics (3) retained their ranking from FY 2017, while BAE Systems (4) and Boeing (5) swapped places. Outside the top Five, Oshkosh Defense fell from sixth to eighth and Northrop Grumman rose one spot, going from seventh to sixth. L3 Communications, SAIC, and General Atomics ranked eighth, ninth, and tenth, respectively, in FY 2017 but fell out of the top 10 in FY 2018. Fluor, DynCorp International, and Leidos moved up into the top 10 in FY 2018 ranking seventh, ninth, and tenth, respectively.

The FY 2018 Army contracting data provided critical preliminary insights into the acquisition system’s response to the Army’s efforts to transform its acquisition approach. The data show that have already been some notable changes in the Army contracting trends in the first year of the Army’s reform efforts. Significant changes in FY 2018 included the large increases in most of the platform portfolios most closely aligned with the Army’s Big Six priorities, the potential emergence of a new paradigm for the Army’s development pipeline for major weapon systems using OTAs, and notable differences in the award of contracts to different sizes of vendors across the three areas of Army acquisition.

Although the FY 2018 Army contracting trends show a preliminary response to the Army’s acquisition reform efforts, even more significant changes are likely in the years to come. Given the time needed to incorporate new priorities into the budget and for new offices’ efforts to get ramped up, it often takes two-plus years before major reforms are reflected in the contract data.13 Furthermore, the Army’s efforts to transform its acquisition system did not stop with its efforts in FY 2018. For example, in the Army’s FY 2020 budget submission, the service identified $25 billion it could cut from its existing acquisition programs over the Future Years Defense Program (FYDP) that could be reinvested toward its new modernization priorities.14 Therefore, it is likely that FY 2018 signals the beginning of a rapidly evolving Army acquisition system, bringing with it perhaps some of the most the most radical changes to the modern Army acquisition system since its inception

Rhys McCormick is a fellow with the with the Defense-Industrial Initiatives Group at the Center for Strategic and International Studies in Washington, D.C.