Defense Buildup: Where Are the Forces?

The Trump administration increased spending for defense by $95 billion between FY 2016 and FY 2019, but even with such a large increase, there was no escaping the trade-off among readiness, modernization, and force structure. Readiness came first so that forces could meet a minimum standard. The next priority was to increase modernization by expanding production of existing systems, upgrading these systems, and enhancing research and development for future systems. Expanding force structure came last in priority, so the increases were smaller than had been expected.

This aligns with the new national defense strategy but collides with day-to-day deployment demands for ongoing conflicts, crisis response, and engagement with allies and partners. To meet these demands, the services are retaining more legacy systems and moving towards a de facto high-low mix.

It Starts with Strategy

The administration’s National Defense Strategy, issued in January 2018, bluntly depicts a U.S. military that is losing its edge over potential competitors and urges “increased and sustained investment” for “long-term strategic competitions with China and Russia.” It echoes many long-standing themes from the Republican national security establishment. Overall, there is a strong tone of U.S. primacy: “The Department of Defense will…remain the preeminent military power in the world, ensure the balance of power remains in our favor, and advance an international order that is most conducive to our security and prosperity.” The Department of Defense (DoD) will “prevail in conflict and preserve peace through strength.” There is no hint that the United States will accept decline or even a multipolar world.

Show Me the Money

The Trump administration did indeed put its money where its strategy was. The chart below shows the large increase already enacted (black line), what the Trump administration plans (yellow)—about $60 billion per year more than what the Obama administration had planned (blue)—and the Budget Control Act caps (BCA, red), which continue to 2021 and will shape future budget negotiations. The Gates projection (orange) provides a benchmark because then- Secretary of Defense Gates had stated that this was the minimum needed for defense, and that level is often cited as a goal by defense hawks. The Trump administration gets close to this level.

But all buildups have limits. The years beyond FY 2019 rise at only the rate of inflation, which means that any new initiatives must be paid for by cuts elsewhere. The administration has stated that it would find management efficiencies, but, so far, has identified few. More likely, the Department will have to identify and cut lower priority programs. 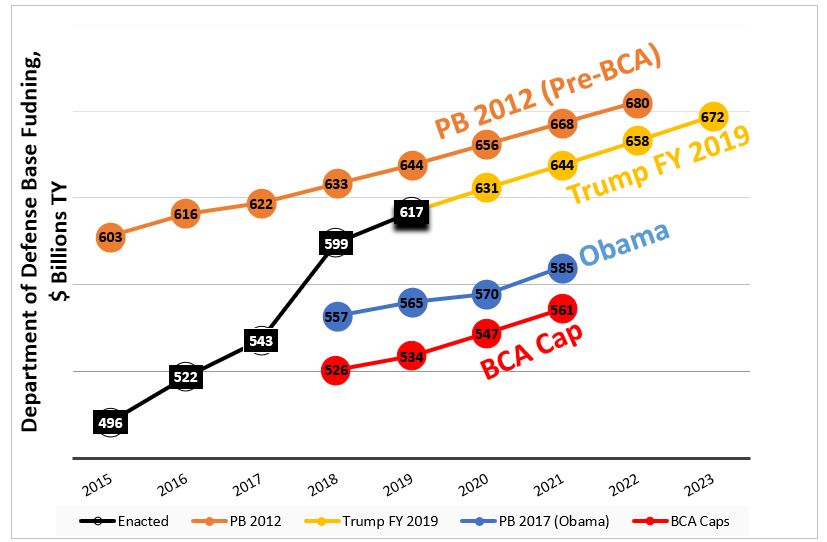 The table below shows what the Obama administration had planned for forces, what President Trump had said during the campaign, and what DoD’s Future Years Defense Program (FYDP) shows. The bottom line is that the Trump FYDP is higher than what the Obama administration had planned but not as high as the rhetoric that Trump had used during the campaign.

Looking at the regular Army as an example, the Obama administration would have cut it to 450,000 soldiers, during the campaign Trump had called for an increase to 540,000 (following recommendations from the Heritage Foundation), but there is only enough money to support 495,000. In the Army, as with the other services, most of the money went elsewhere, first to readiness, then to modernization. 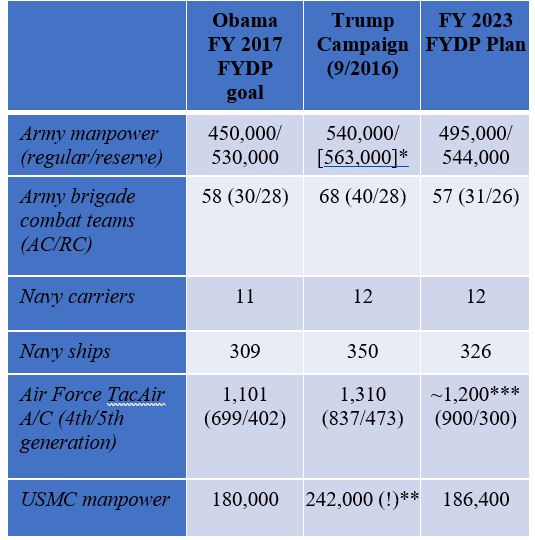 **This was the implied size of the Marine Corps in the Heritage study that Trump cited. It is not clear that such a large increase was intended.

***Estimated. The Air Force is moving to a different metric—operational squadrons—but data are not yet fully available.

The Navy also shows this tension. The current shipbuilding plan is substantially above that of the Obama administration. However, the “steady, sustainable” long-term plan does not reach the target of 355 ships until the 2050s and would cost about $5 billion per year more than the average level in the FYDP. An “accelerated plan” gets to 355 ships in the 2040s but stretches the industrial base and costs even more. Faced with the prospect of not meeting the president’s goal, the Navy has considered extending the life of existing ships. That gets to 355 ships in the early 2030s but leads to the second major issue: retention of legacy systems, especially as a way to meet day-to-day deployment requirements. 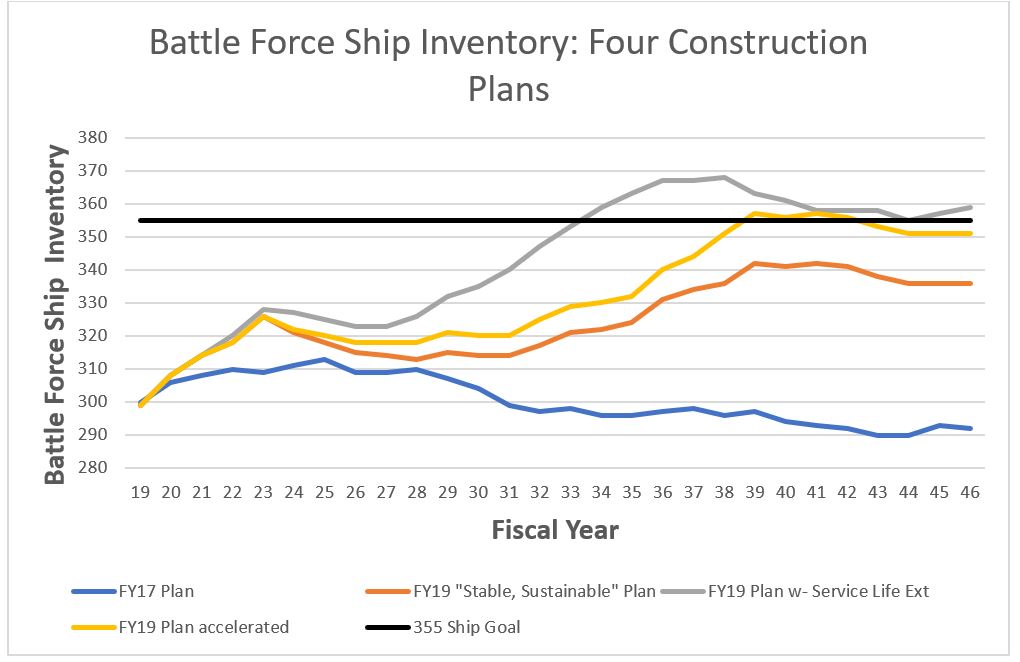 Strategists tend to focus on great power competition and are therefore drawn to futuristic high-end conflicts and the modernization necessary to conduct them. However, the press of ongoing conflicts, allies’ desires for engagement, and the need to respond rapidly to crises push against such a focus. The world appears to be in a state of persistent conflict. As many experts point out, physical presence is needed to meet these demands and to exercise global leadership; virtual presence is inadequate.

This tension is pushing the services towards a high-low mix, that is, having some highly capable and expensive systems for a conflict with a peer competitor and, to provide needed force numbers, having other systems with lesser capabilities for conflicts with regional competitors and day-to-day deployments. This drives retention of legacy systems.

Two charts show how this affects the Air Force. The first shows that the Air Force has been able to maintain its total inventory level since about 2010, after the post-Cold War declines and termination of the Air Force’s budget strategy during the 2000s of trading size for modernization. 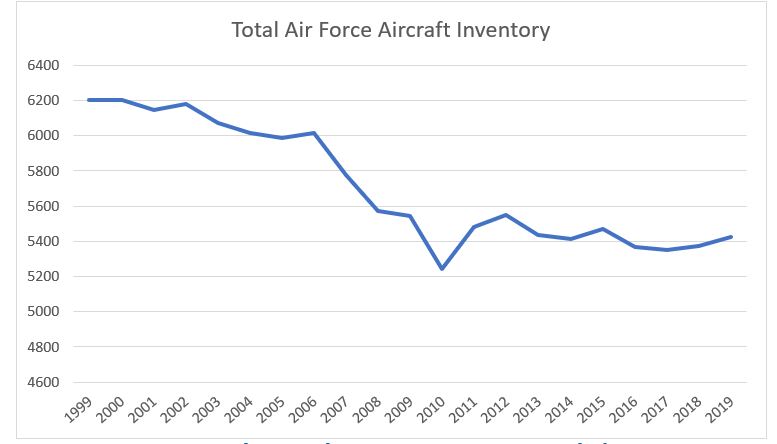 The second chart shows the price the Air Force has paid to maintain its aircraft inventory in the face of inevitable limitations on aircraft procurement: a sharp increase in average aircraft age. It has mitigated the effect of aging through upgrades, such as new (Active Electronically Scanned Array or AESA) radars for F-15s, life extension kits for F-16s, and strengthened wings for A-10s. 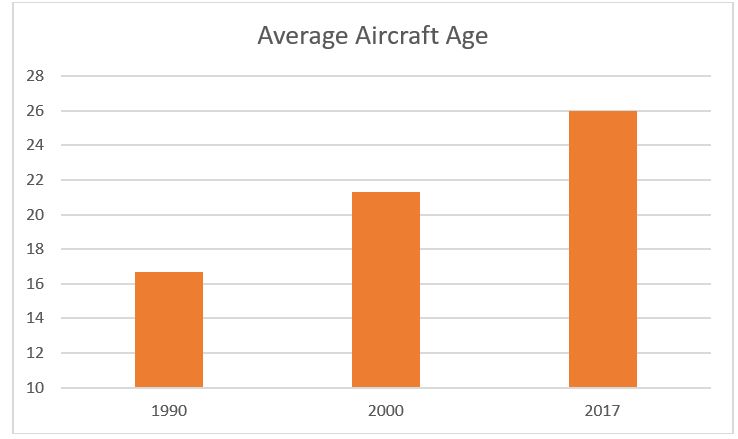 Another place this tension appears is with the procurement of lower cost systems such as the Navy’s planned frigate program (FFG(X)) and the light attack aircraft in the Air Force. The FFG(X) program, combined with the earlier and relatively unsuccessful Littoral Combat Ship (LCS) program, will provide large numbers of ships to help meet global demand for deployments. The light attack aircraft will provide the Air Force with a low-cost attack aircraft for employment in low-threat environments and spare the service having to use expensive fifth-generation aircraft such as the F-35.

The administration has indeed made modernization a priority. Between FY 2017 and FY 2019, modernization funding (procurement plus Research, Development, Test and Evaluation) increased by $35 billion. However, a striking feature of modernization in FY 2019 is that the services began no new major procurement programs. Instead, they increased production of existing systems. Thus, the Army bought more tanks and helicopters, the Navy bought more DDG-51 destroyers, and the Air Force bought more F-35 aircraft. All services increased production of munitions, especially long-range and precision munitions, as a way of increasing the lethality of existing platforms. This may represent an interim phase before the services begin new programs in the FY 2020 budget, or it may be a decision by service budgeteers to get as much equipment as possible while the budget window is open.

This approach engendered the major criticism of the budget—that it did not move rapidly enough away from legacy systems and towards new systems that align better with a strategy that is focused on high-end conflicts. 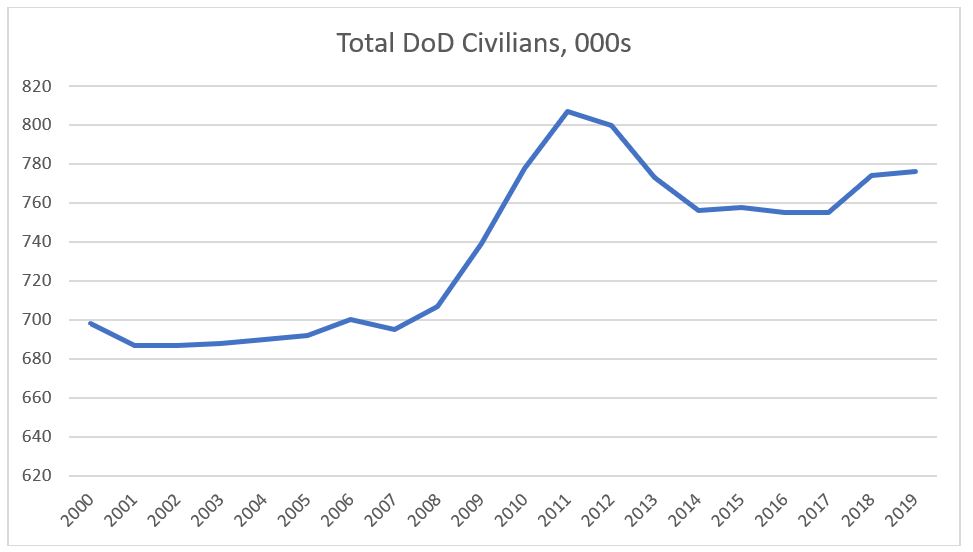 Contractors as a Permanent Element of Military Force Structure

As the chart below shows, spending on contractors has declined from the wartime high but is still higher than such spending was before the wars and has headed back up. The reasons are the same as for DoD using civilians but with one additional reason: contractors are easier to fire when the activity is no longer needed. 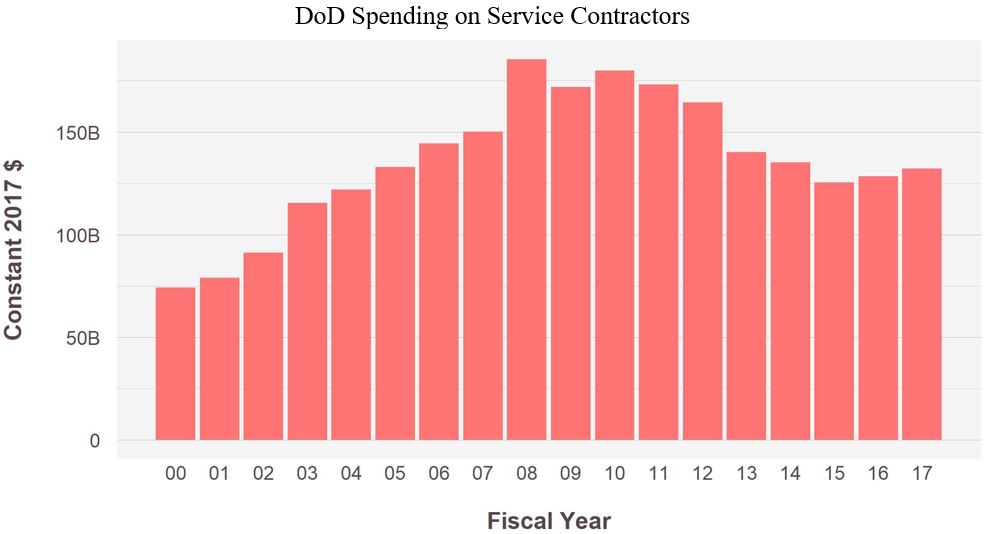 Special operations forces (SOF) grew greatly during the wars, from 29,500 military personnel in 1999 to 65,152 today and experienced no postwar decline, unlike the military services. They are now approaching the size of the British Army (81,500 in 2018). This large post-2001 increase has been in response to DoD’s steadily increasing demand for SOF core missions of direct action, foreign internal defense, irregular warfare, and civil affairs, and for new missions such as providing DoD’s global counterterrorism capabilities. 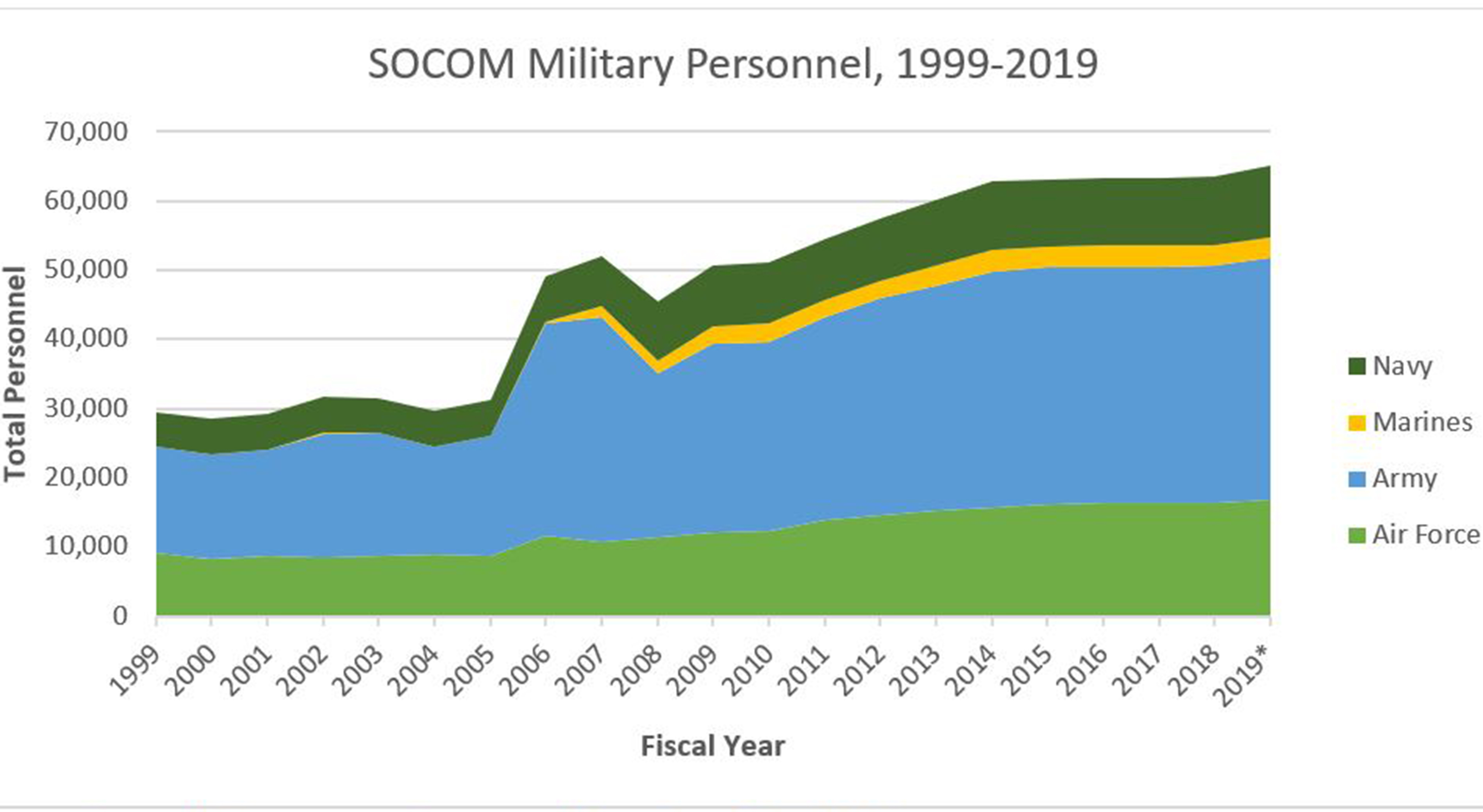 As the role and numbers of SOF have increased, Congress has given its governing institutions—Special Operations Command and the Assistant Secretary of Defense for special operations and low-intensity conflict—expanded powers that make SOF look like a separate service without formally establishing them as such.

Deputy Secretary of Defense Patrick Shanahan has said that 2020 will be “the masterpiece.” By this he meant that previous budgets were developed before the national defense strategy was fully articulated, so the FY 2020 budget will be the first budget to fully align with the new strategy. However, the requirement to pay for any new initiatives will put a damper on major changes. Early reports indicate that upgrades for many legacy platforms will be the major billpayers. This will be controversial, politically (by cutting jobs in congressional districts), programmatically (by ceasing production of successful existing systems in order to fund unproven future systems), and strategically (by restricting numbers and hence the ability to meet day-to-day deployment demands). Stay tuned.

Charts and analysis in this article come from a forthcoming CSIS report by Mark Cancian, “U.S. Military Forces in the FY 2019 Budget.” Watch for it.

Mark F. Cancian is a senior adviser with the International Security Program at the Center for Strategic and International Studies (CSIS) in Washington, D.C. 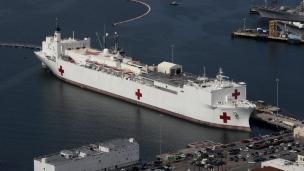