As the DoD and congressional leadership have sought ways to maintain continued U.S. technological superiority against global competitors like China and Russia, OTA agreements have become an increasingly popular tool. Between FY 2015 and FY 2019, DoD OTA obligations increased from $0.7 billion to $7.4 billion, a 712 percent increase. Neither contracts, grants, nor cooperative agreements, OTAs are a more flexible acquisition approach that enables specific federal agencies to access goods and services outside of traditional acquisition processes.1 OTAs are not subject to the Federal Acquisition Regulation (FAR) and other related regulations, meaning that all of the usual government contract requirements are either absent or negotiable. In return, OTAs give these agencies greater flexibility and customization in designing a contract approach that can incentivize and attract nontraditional defense contractors, better manage risk and uncertainties, and increase efficiency. However, OTAs are not without risk as they can be more complicated to design and execute, which is compounded by a lack of familiarity and training amongst the broader acquisition community. Additionally, OTAs are more restrictive in what they can be used for. The specifics depend on the laws and statutes governing the different federal agencies’ OTA authorities, but OTAs are largely limited to activities involving R&D.

DoD has had some form of OTA authority since 1989 (when DARPA was given the authority to enter into OTAs), so what explains its increased popularity in recent years? DoD’s recent interest in OTAs is heavily driven by the FY 2015 and FY 2016 National Defense Authorization Act (NDAA) expanding what DoD can use OTAs to accomplish.2 Section 812 of the FY 2015 NDAA expanded the range of what types of prototypes could be perused under an OTA, while Section 815 of the FY 2015 NDAA “expanded DoD’s OTA authority by making DoD’s OTA authority permanent, modifying the definition of nontraditional defense contractor, and allowing DoD to issue follow-on production contracts for OTA prototypes.”3 In the FY 2016 NDAA conference report, House and Senate conferees noted that the expansion of DoD’s OTA authorities was designed to “support Department of Defense efforts to access new source of technical innovation” by making OTAs “attractive to firms and organizations that do not usually participate in government contracting due to the typical overhead burden and ‘one size fits all’ rules.”4

This brief builds and expands on the methodology used in other CSIS reports that employ data from the Federal Procurement Data System (FPDS). Unlike other Defense-Industrial Initiatives Group reports on federal contracting, which rely on bulk data downloaded from USAspending.gov, this brief relies on the data downloaded directly from FPDS.gov. All dollar figures are reported in constant FY 2019 dollars, using the latest Office of Management and Budget (OMB) deflators.

OTAs have become a core element of the DoD approach to technology acquisition. 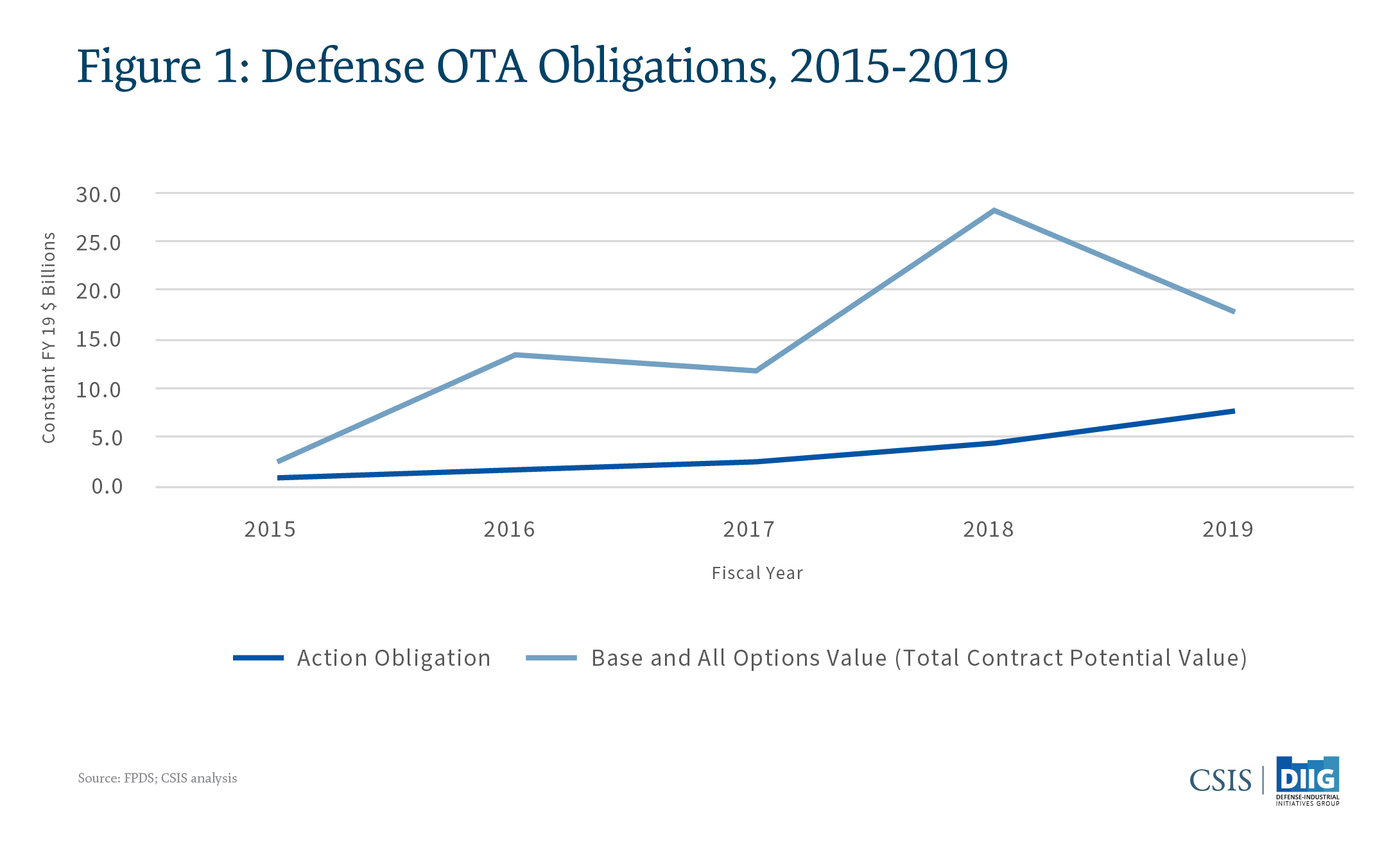 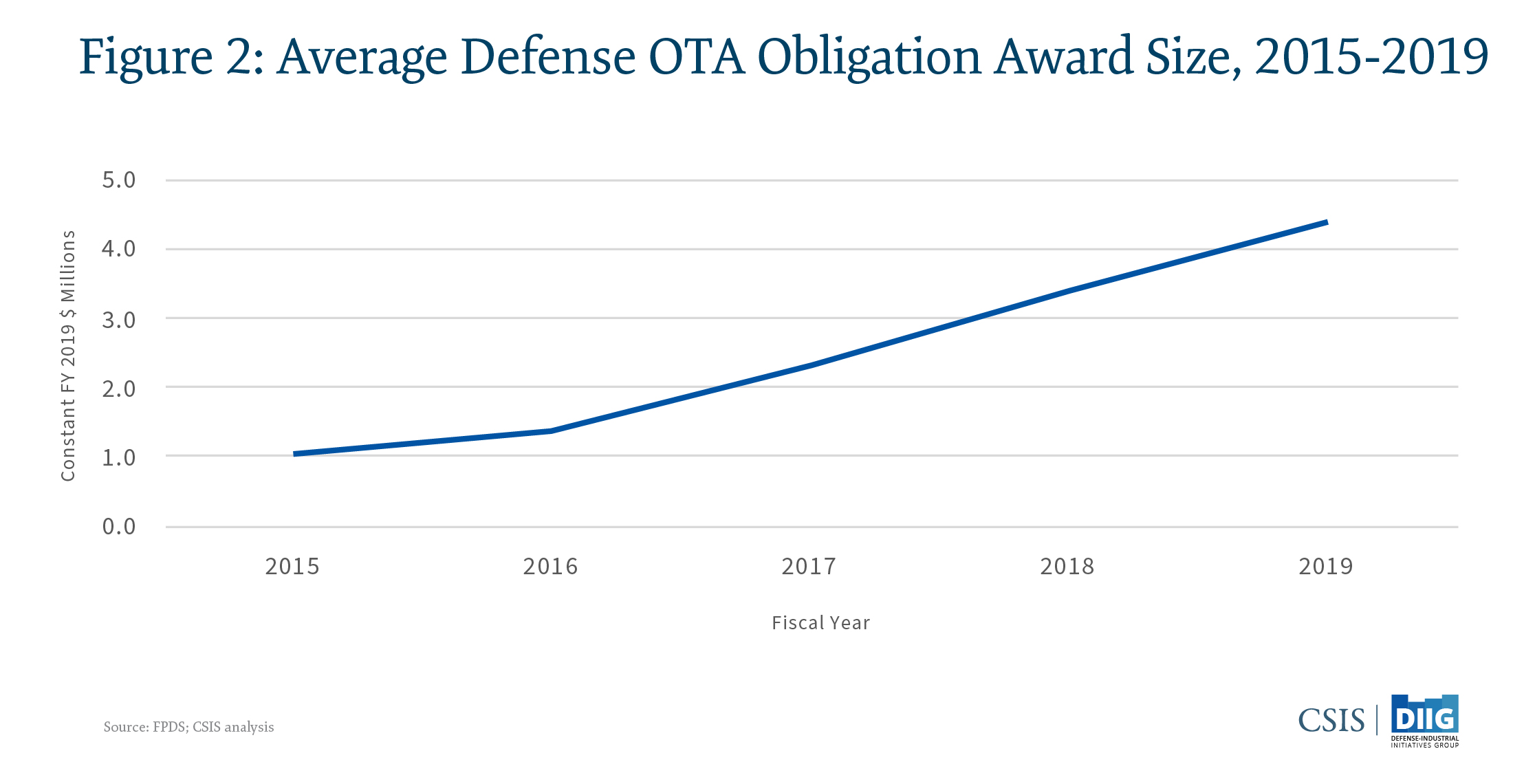 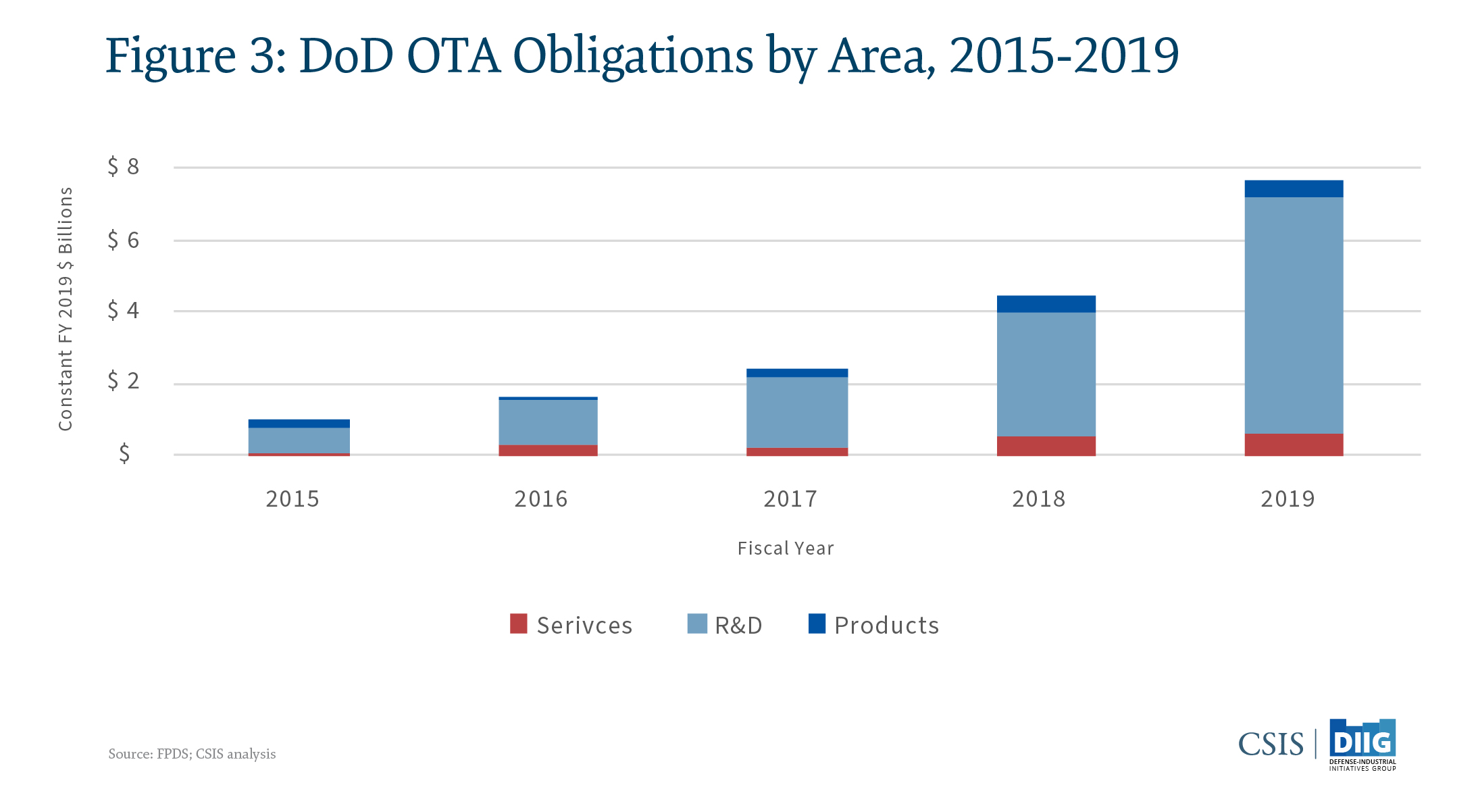 Is a New R&D Paradigm Emerging?

Looking at the recent OTA trends in the context of DoD’s broader R&D portfolio, the data suggests that a new acquisition paradigm might be emerging. Between FY 2015 and FY 2019, DoD’s R&D portfolio of OTAs and contract obligations increased from $24.8 billion to $36.5 billion, a 47 percent increase. While defense R&D contract obligations increased 25 percent over the last five years, this growth was primarily driven by the 785 percent increase in defense R&D OTA obligations. In FY 2015, OTAs accounted for just three percent of DoD’s total R&D portfolio. Comparatively, in FY 2019, OTAs totaled 18 percent of DoD’s total R&D portfolio. 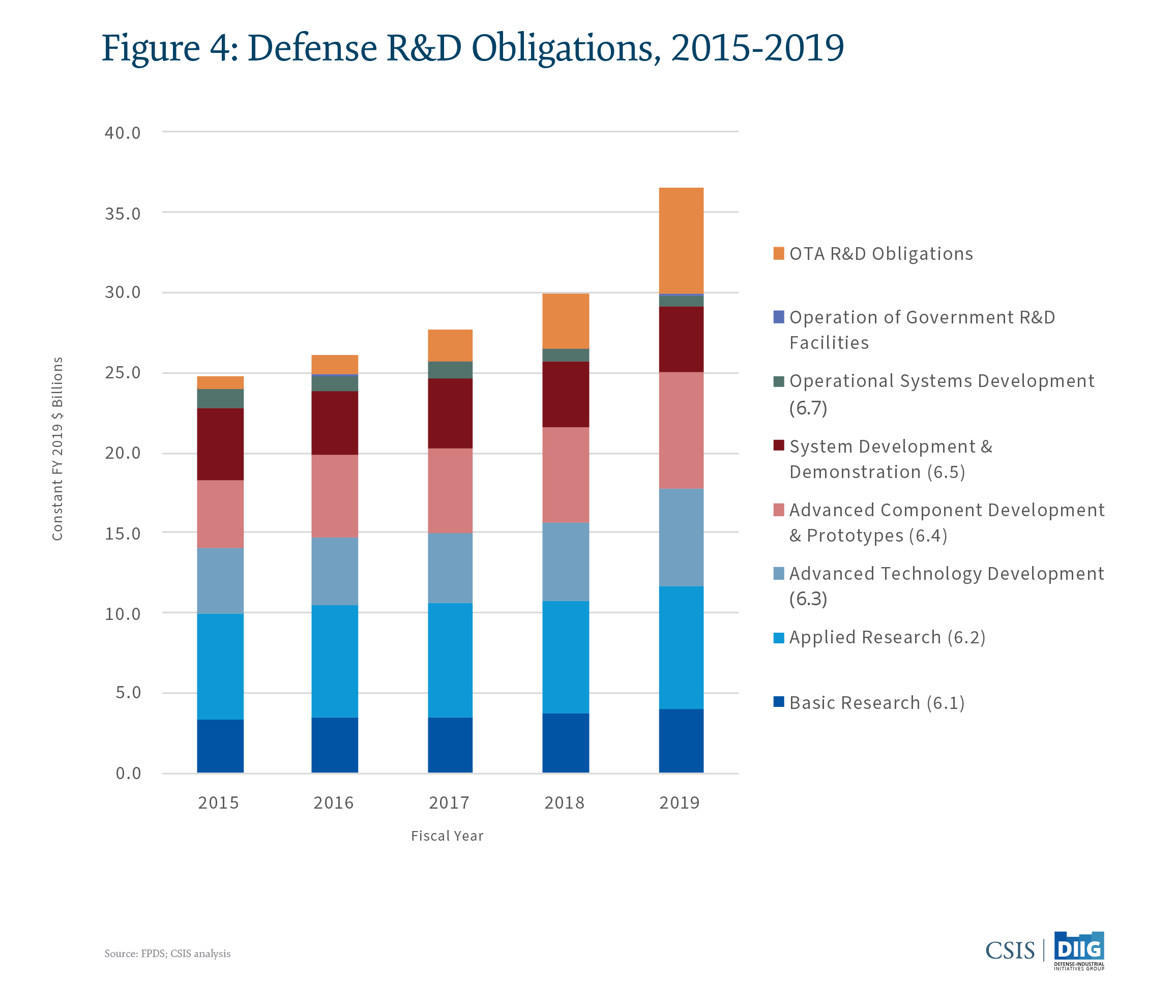 These trends suggest that a new R&D paradigm is emerging in which R&D activities in the mid-to-late stages of the development pipeline for major weapon systems that had previously been executed using contracts are now being conducted under OTAs. Such a move would be in line with the emphasis on DoD’s OTA to “carry out prototype projects that are directly relevant to enhancing the mission effectiveness of military personnel and the supporting platforms, systems, components, or materials.” The emergence of this new R&D paradigm would bring with it significant benefits, but also significant risks. Unburdened by the FAR and other regulations, greater usage of OTAs in the development pipeline for major weapon systems offers significant potential for driving efficiencies in the defense acquisition system, speeding up delivery of critical technologies, and attracting new vendors to the defense ecosystem. However, OTAs place a greater emphasis on the acquisition workforce which is already less familiar with OTAs and may not always have the requisite skills and training necessary to negotiate and execute OTAs. In addition, the increased flexibility of OTAs also can come with increased uncertainty. An approach to the late stages of system development that emphasizes rapid prototyping may involve more design changes or decisions to defer the production of prototypes that don’t satisfy the military customer. For industry, this translates to greater risk. As this new R&D paradigm emerges, finding the balance between traditional FAR-based acquisition processes and OT-based agreements will be crucial. OTAs cannot and should not be a catch-all replacement to the traditional FAR-based acquisition system, but there is substantial benefit in an alternative acquisition system that works best for certain scenarios.

A few notable trends emerge in analyzing DoD OTA obligations by platform portfolios as shown in Figure 6 below. 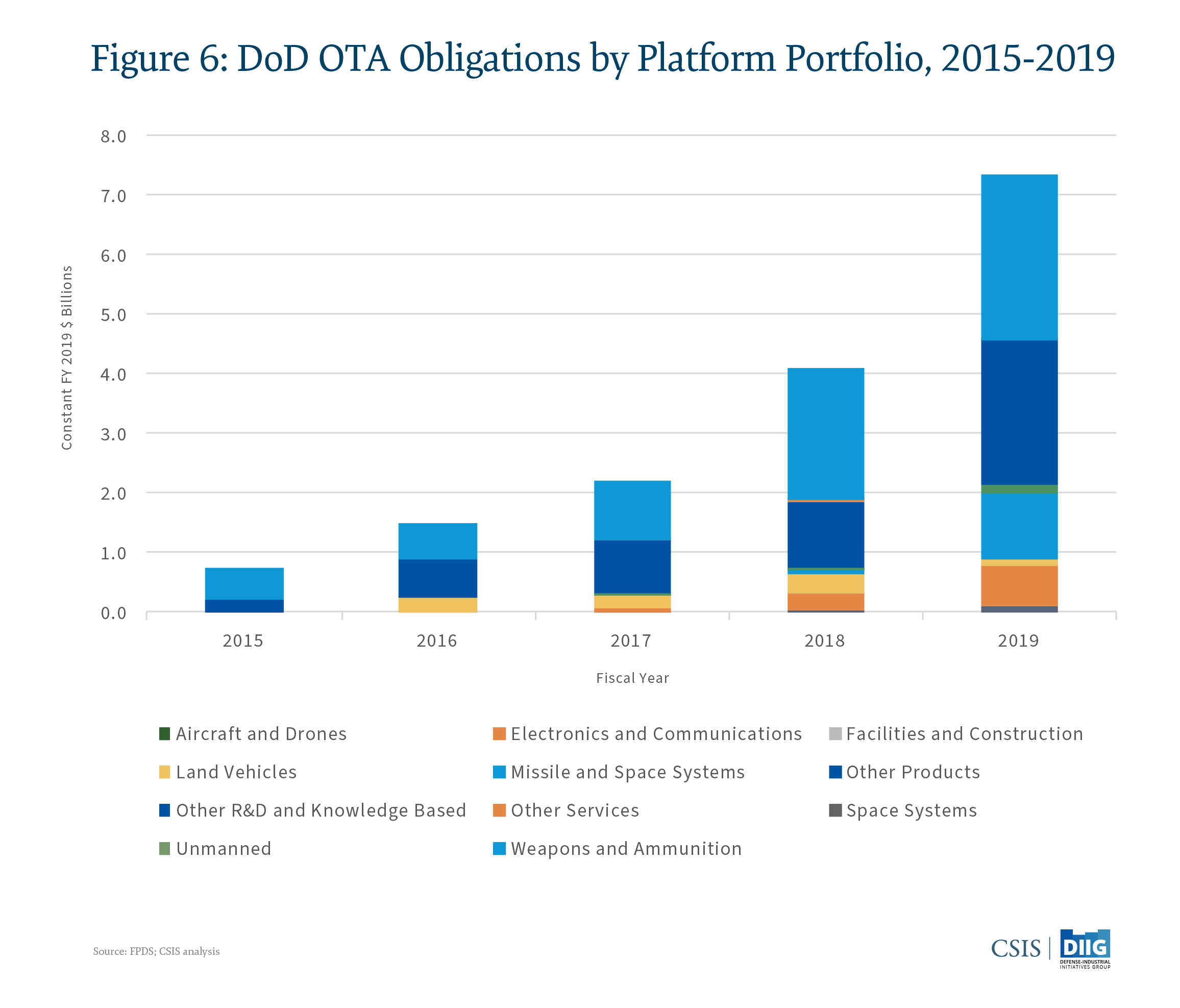 How Are the Different DoD Components Using OTAs? 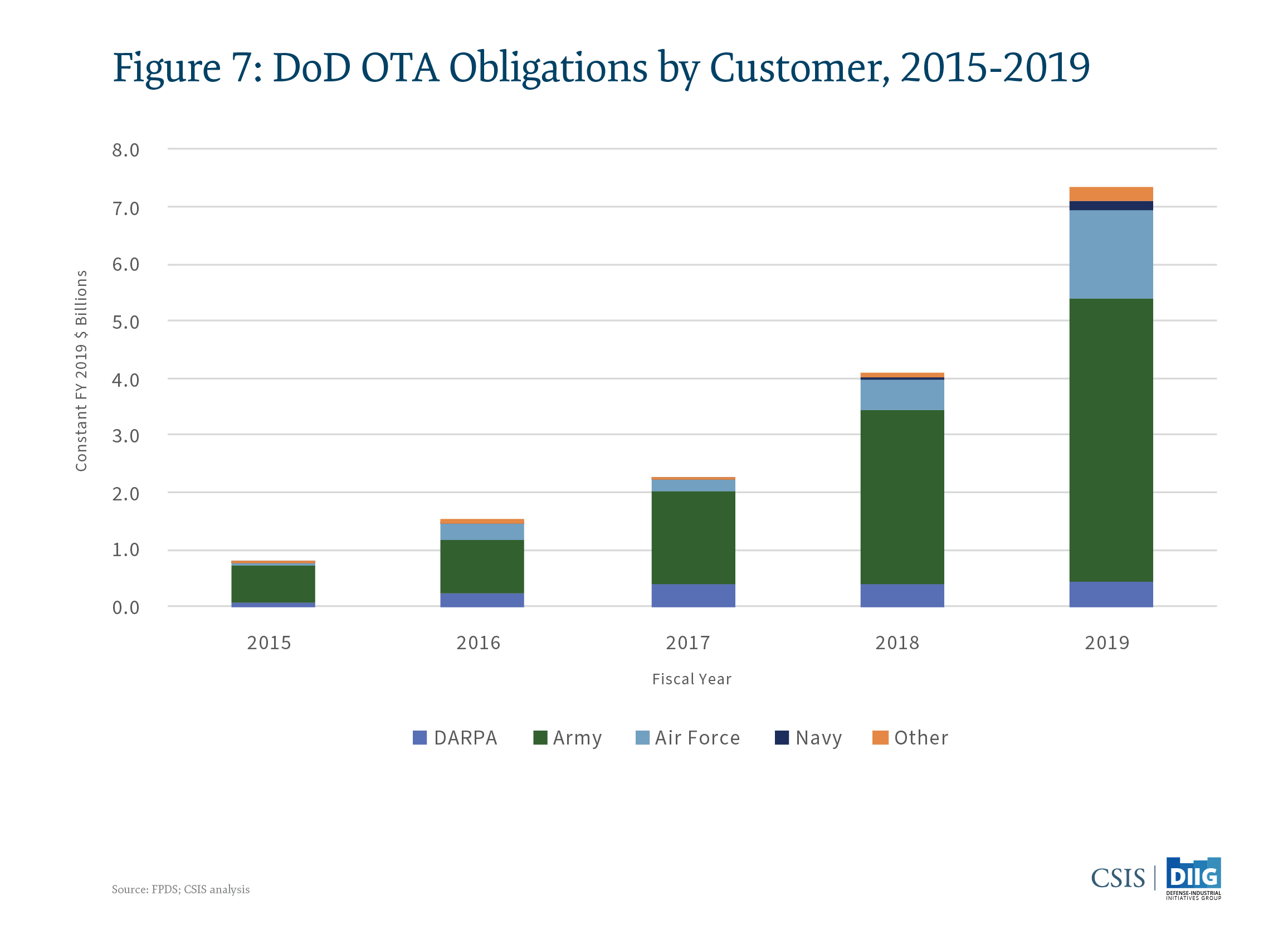 As highlighted in previous CSIS reports on DoD OTA usage, Army Contracting Command New Jersey (ACC-NJ) headquartered out of Picatinny Arsenal, the Army’s Center of Excellence for OTAs, remains the largest awarder of OTAs across all of DoD, but other contracting offices are beginning to catch up. 6 Whereas ACC-NJ accounted for 89 percent of DoD OTA obligations in FY 2015, it accounted for 45 percent of DoD OTA obligations in FY 2019. Although ACC-NJ may be the leading contracting office within the Army and DoD, the Army has several other contracting officers executing OTAs, accounting for 5 of the top 10 DoD OTA contracting offices. Outside of the Army, we are starting to see the emergence of the Launch Enterprise Systems Directorate and Space Development & Test Wing contracting offices in the Air Force. Unlike the Army, which has formally designated one of its contracting offices (ACC-NJ) as its OT center of excellence, the Air Force has elected to designate its OT center of excellence in its Office of Transformational Innovation, which is located within the Assistant Secretary of the Air Force for Acquisition, Technology and Logistics (SAF/AQ) office.7 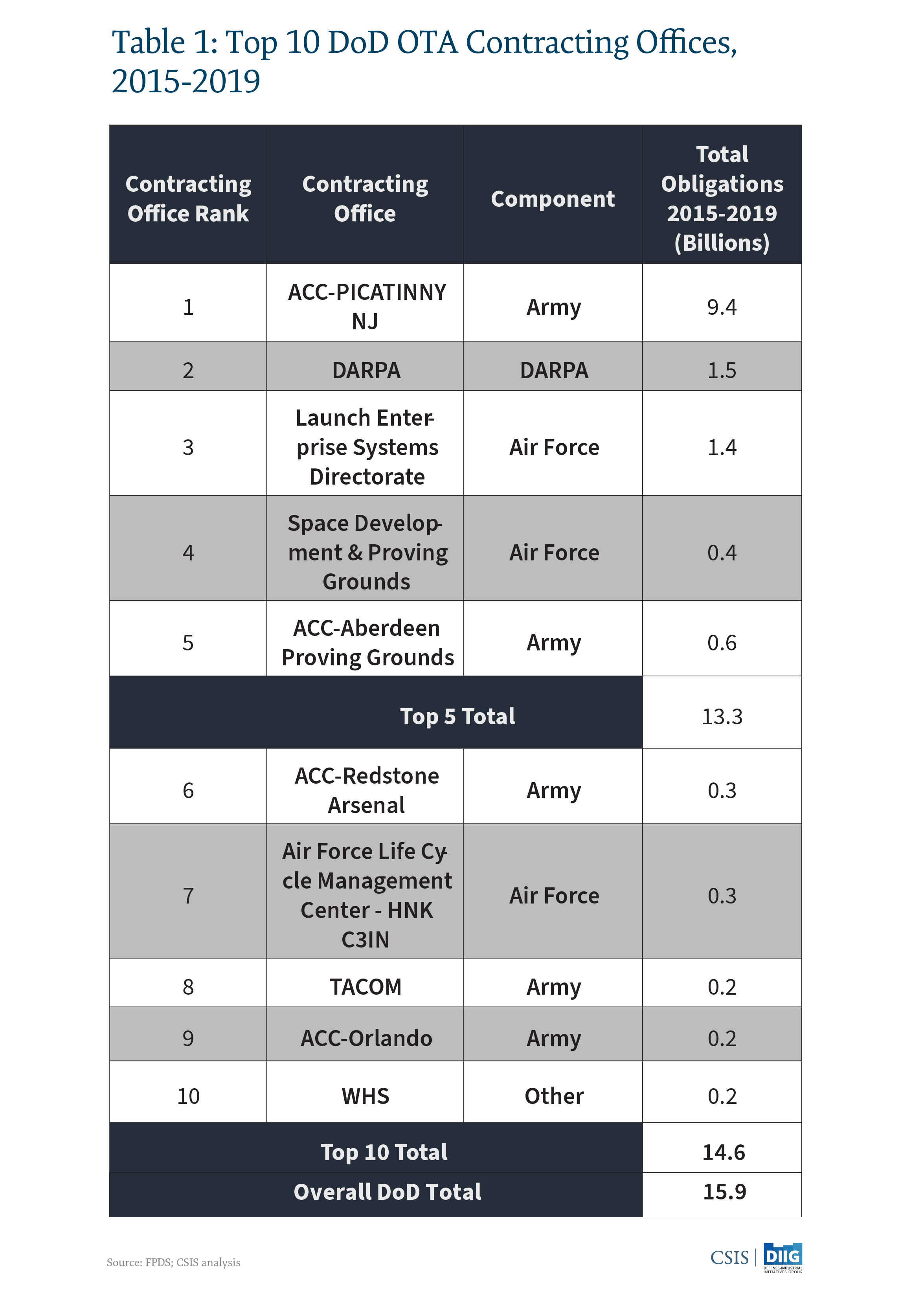 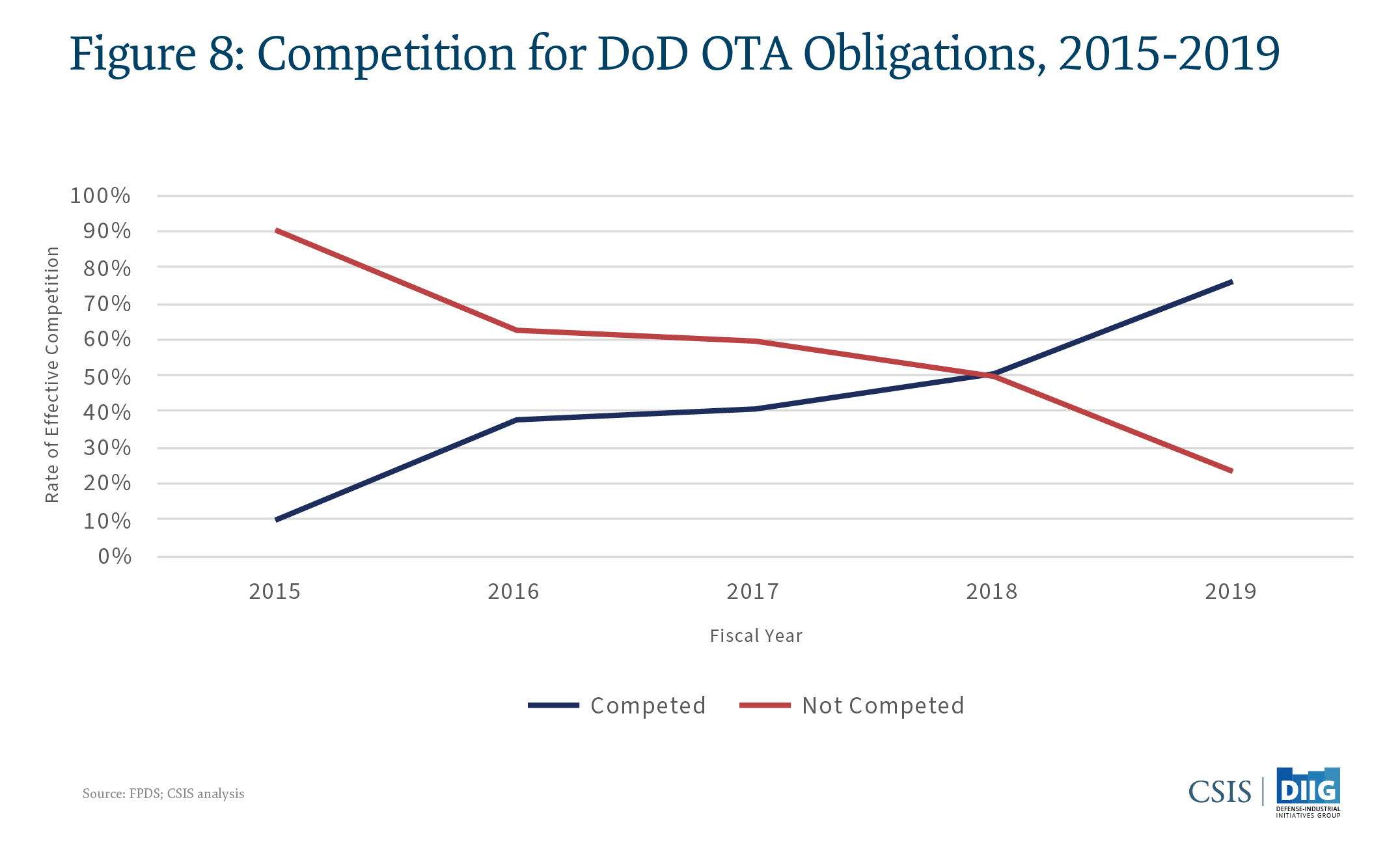 Whom Is DoD Buying From?

The majority of OTA obligations in recent years were awarded to consortia. 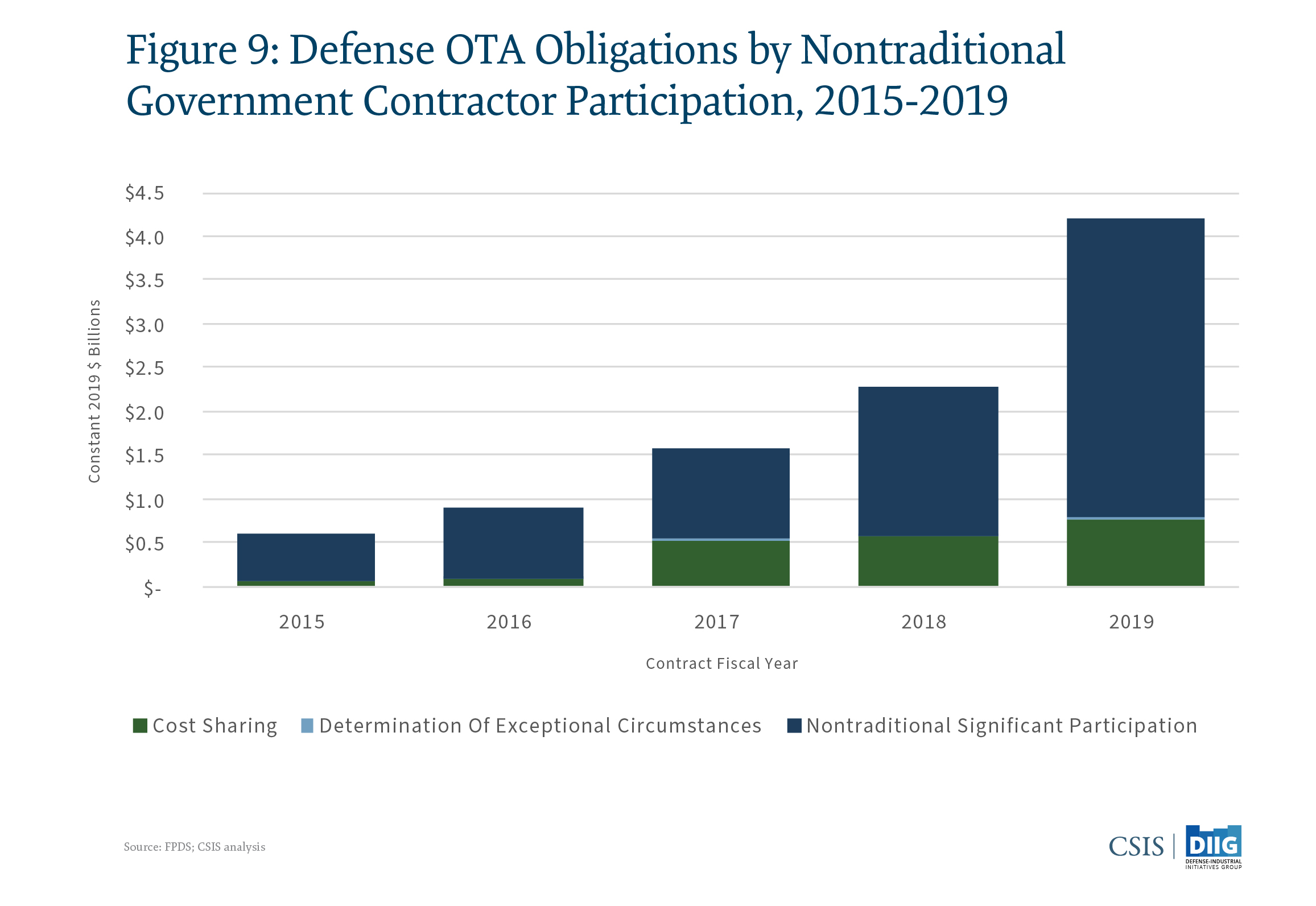 Although the data show that nearly 96 percent of DoD OTA obligations were awarded to nontraditional significant participation, looking at the data by top vendors shows that most DoD OTA obligations are awarded to consortia. Between FY 2015 and FY 2019, the top DoD OTA vendors were Analytic Services Incorporated, Advanced Technology International, Consortium Management Group Incorporated, the National Center for Manufacturing Services, and the System of Systems Consortium (SOSSEC). These five vendors, all consortia, accounted for 57 percent of total DoD OTA obligations between FY 2015 and FY 2019.

Beyond the top 5, the top 20 overall defense OTA vendors included a wide range of vendors ranging from Big Six defense vendors (Raytheon) to multinational tech giants (Microsoft) to consortia and smaller vendors. These top 20 vendors accounted for 80 percent of DoD OTA obligations between FY 2015 and FY 2020. 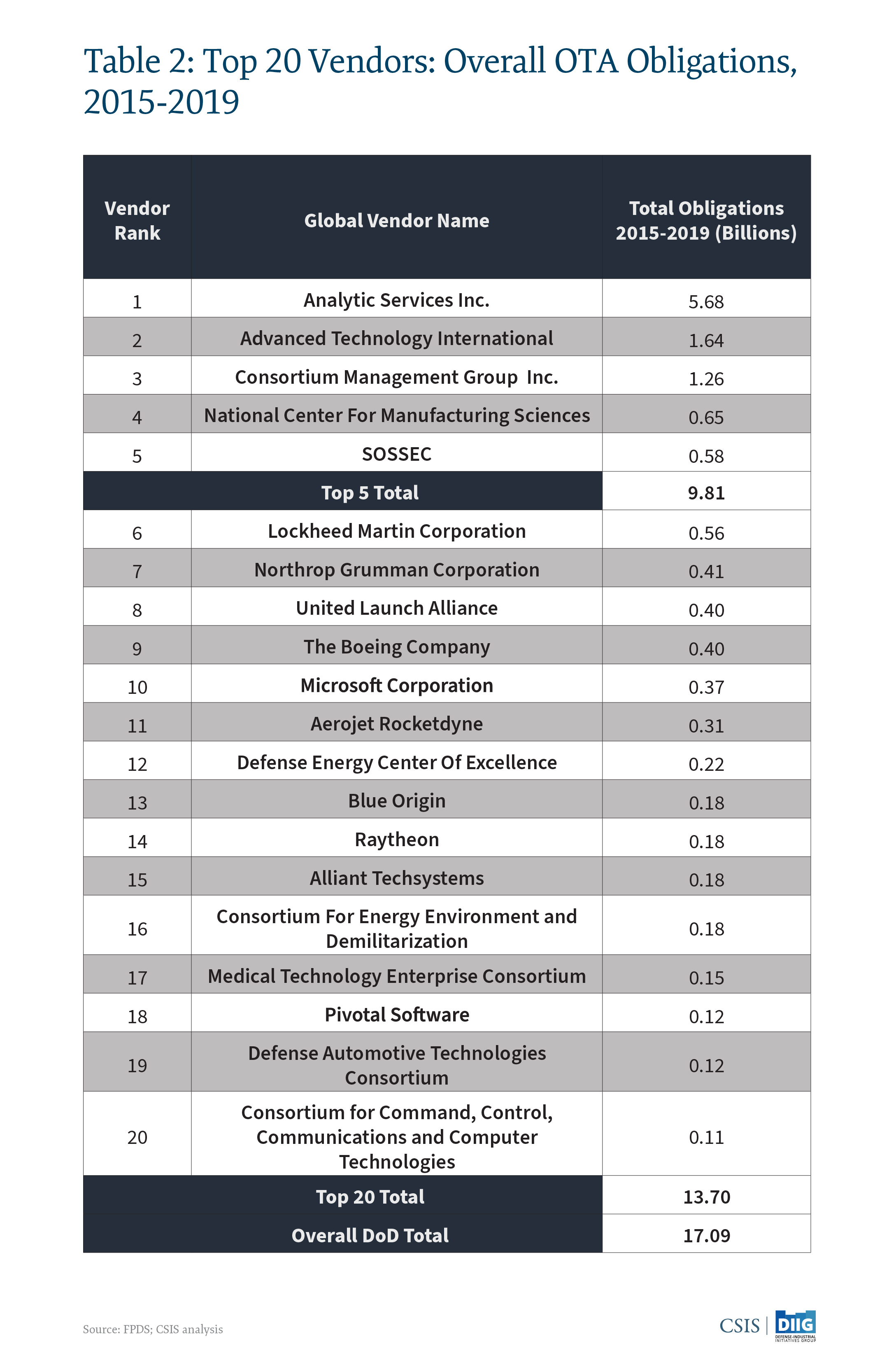 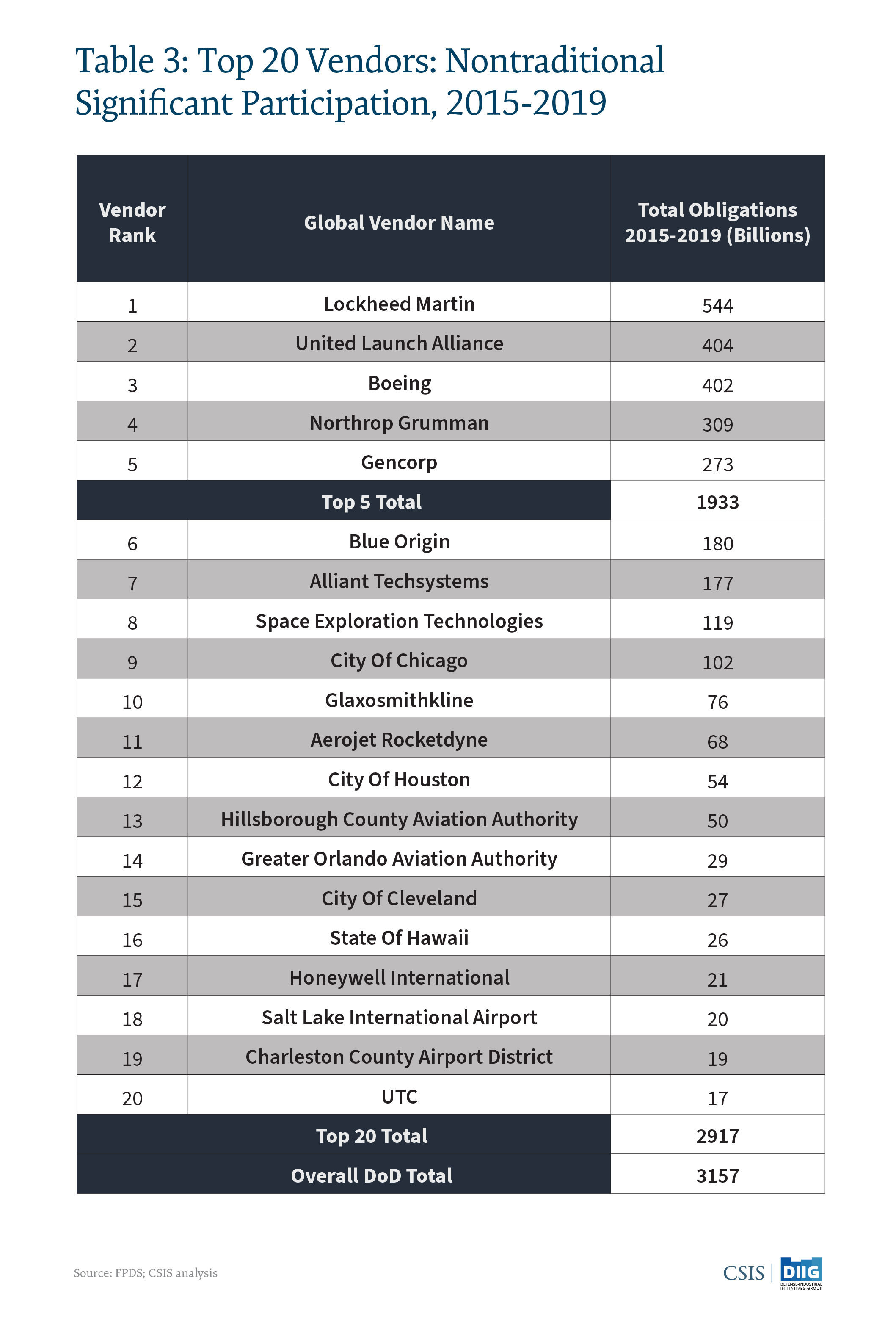 Although a considerably smaller portion of DoD OTA obligations, there is a considerable difference among the top vendors with cost sharing. Within the top 20 cost sharing vendors, you have both three of the Big Five defense vendors (Lockheed Martin, Boeing, and Northrop Grumman), large defense firms like Honeywell, and several local municipalities. 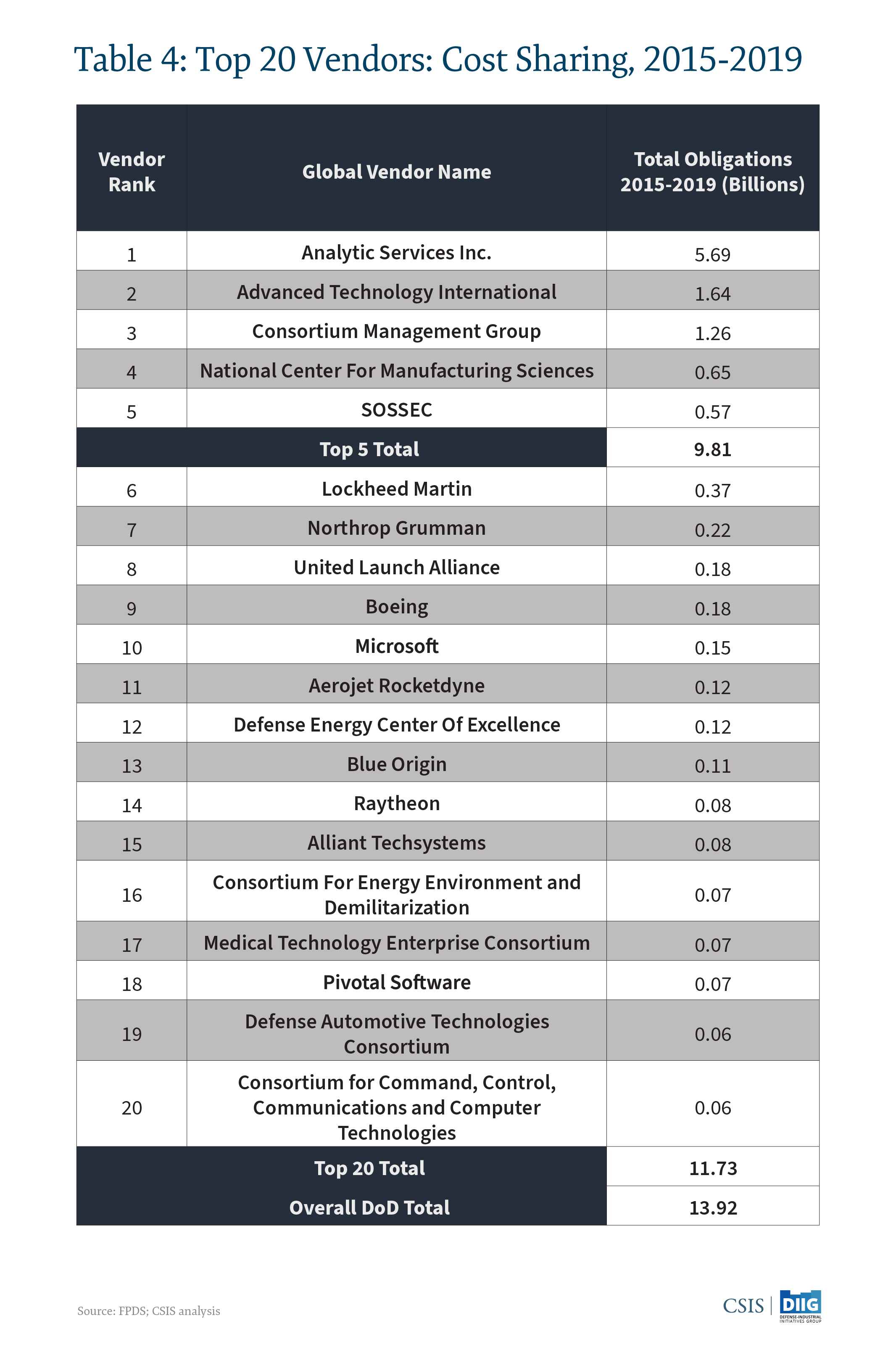 This data presents a preliminary analysis of the topline trends in DoD’s OTA usage. The evidence suggests that there is a paradigm shift ongoing in DoD as OTAs have become a core element in DoD’s approach to technology acquisition over the last five years. This is clearly seen in the mid-to-late stages of the development pipeline for major weapon systems where OTAs are increasingly replacing contracts. Between FY 2015 and FY 2019, OTAs rose from just 3 percent of DoD’s total R&D portfolio to 18 percent of DoD’s R&D portfolio. However, while there has been a significant shift toward OTAs in the mid-to-late stages of the development pipeline for major weapon systems at a macro level, the data also suggests this is not true across all areas of the defense industrial base. Some sectors such as Weapons and Ammunition and Other R&D and Knowledge Based have seen significant usage of OTAs while other sectors like Space Systems have seen less usage. In conversations with defense industry and government officials, anecdotal evidence suggests that we might start to see a shift in these trends in other sectors of the defense industrial base like aircraft, but whether this presents in future years data remains to be seen. Furthermore, we have seen a rise of the OSA consortia in recent years as OTAs have become more prevalent, raising questions about oversight and competition since there are fewer mechanisms for understanding what happens within consortia.

There has been a significant shift toward OTAs in the mid-to-late stages of the development pipeline for major weapon systems in certain sectors of the defense industrial base.

The data show that DoD envisions OTAs as a critical component of its weapon systems development strategy going forward, but this approach also brings with it significant risks that must be considered. The later stages of the development system for major weapon systems are the most critical stages where you get into testing and find out whether the technologies you have invested in actually do what you expect them to in an operational setting. Additionally, during these stages, you start to develop executable plans for how the military plans to sustain this new equipment. However, this added flexibility can make planning more difficult for both the industry and the military as there is less certainty as to what to plan for. For these reasons, this is the most important oversight period for the weapon systems pipeline. While OTAs are not inherently free from oversight compared to contracts, their greater flexibility is part of a broader signal pushing for less oversight in pursuit of accelerated technology acquisition. While accelerated weapon systems development is an admirable goal, less oversight risks blowback on OTAs and potential reductions of DoD’s OTA authorities, as is what happened after the collapse of the Future Combat System. Although OTAs were not to blame for FCS’s failure, the blowback led to a reluctance to use OTAs in subsequent years. Finding the proper balance will be critical for DoD’s technology acquisition strategy going forward.

Rhys McCormick is a fellow with the Defense-Industrial Initiatives Group.