The aim of the bipartisan and international CSIS Ukraine Economic Reconstruction Commission is to produce a policy framework that will help attract private sector investments to support Ukraine’s future economic reconstruction. To support the commission, CSIS will convene a series of working groups to examine a range of issue-specific areas that are critical for reconstructing and modernization of the Ukrainian economy, including in agriculture, energy, and transportation and logistics, as well as addressing the impact of corruption on private sector investment.

Russia’s invasion of Ukraine has had far-reaching impacts on the global energy system. In Ukraine, a very different energy crisis is unfolding as Russia has directly targeted Ukraine’s energy infrastructure with waves of missile attacks, leaving the power grid severely damaged. These attacks have led to rolling blackouts across the country, worsening the humanitarian crisis.

Rebuilding Ukraine’s energy system will be essential to enabling both broader reconstruction efforts and the return of economic activity. There are two principles that should guide efforts to rebuild Ukraine’s energy system: (1) ensuring energy security and independence, and (2) deepening the connection and economic relationship between Ukraine and the European Union. To accomplish both, Ukraine should develop its potential renewable energy resources. Renewable energy, including wind, solar, and biomass, are abundant in Ukraine. Developing these resources will support domestic power generation, thereby bolstering Ukraine’s energy security and independence. Ukraine has ample potential to become an energy exporter after the war, thereby supporting the European Union’s decarbonization and energy security goals.

As with broader reconstruction efforts, the renewables sector will need substantial financial support from both public and private partners. Creating a market that can attract capital and compete with other countries pursuing renewable energy will require improvements to Ukraine’s renewable policy framework. Expanding renewable energy generation will depend on significant grid modernization efforts and greater storage and export capacity to manage variable generation across the system.

To successfully unlock the potential within Ukraine’s renewable energy sector, several key questions should be addressed:

The reconstruction of Ukraine’s energy sector will initially focus on repairing the damage done to the power grid and other energy infrastructure (such as pipelines for district heating networks, thermal power plants, and transmission networks) to ensure energy access for citizens and enable building efforts. Once these initial steps are implemented, continuing efforts to expand renewable energy should be prioritized in reconstruction.

State of Renewable Energy in Ukraine Prior to the War

Ukraine has significant potential to expand energy generation from renewable resources including wind, solar, and biomass. The International Renewable Energy Agency (IRENA) conducted a survey of Ukraine’s renewable sector and potential in 2015. Ukraine’s total wind power potential is between 16 gigawatts (GW) and 24 GW, with 16 GW considered economically feasible. Prior to the war, companies had significant wind capacity additions planned, with 91 turbines added in 2021. The most promising regions for solar development are in the southern and southwestern regions of the country, where solar irradiance is highest. IRENA estimates a total of 4 GW of feasible solar development potential in Ukraine. Biomass could increasingly be used for heating purposes across the country thanks to Ukraine’s plentiful agricultural resources.

Prior to the war, Ukraine had seen substantial increases in renewable capacity and private sector investment. The Ukrainian government set a goal of sourcing 25 percent of its total energy mix from renewables by 2035. In 2009, renewables accounted for around 3 percent of Ukraine’s electricity generation mix; by the end of 2020, this share had increased to 12.4 percent. The figure below shows the mix of renewables in electricity generation in 2020, with the highest contributions from hydro and solar power. Hydropower plant capacity has remained relatively stable over the past 10 years, with all major hydropower plants belonging to the state-owned company UkrHydroenergo. The renewable increase has been driven by wind and solar additions with some biomass production coming online in more recent years. 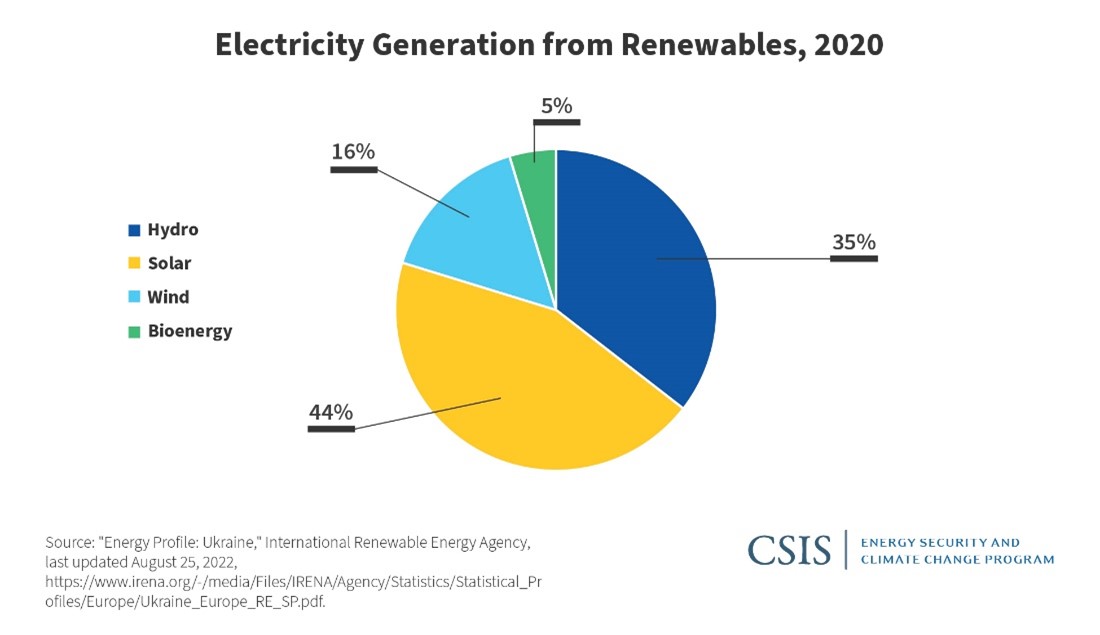 The rapid expansion of renewable energy sources (RES) was driven by the adoption of a feed-in tariff (FIT) in 2009. The policy led to a surge of private sector investment, as the FIT in Ukraine was one of the highest across Europe. Under the FIT policy, energy produced from renewable sources could be sold to the guaranteed buyer, a state-owned enterprise created when Ukraine liberalized its electricity market. The guaranteed buyer would then sell the purchased electricity at market prices (lower than the tariff). The policy proved to be unsustainable, with the guaranteed buyer unable to meet payment obligations to renewable energy generators starting in 2019. While Ukraine had begun to reform the policy surrounding renewables prior to the war, significant steps will need to be taken in postwar reconstruction to attract and sustain investments in the sector.

Ukraine has outlined plans that would significantly ramp up renewable generation capacity in the reconstruction effort. The Ukraine National Recovery Plan, presented in July at the Lugano conference, includes around $130 billion in spending (equivalent to 65 percent of Ukraine’s GDP in 2021) to achieve energy independence and develop green energy over two reconstruction phases (2023–2025 and 2026–2032). Renewable energy is emphasized in the second phase, with a target of an adding 5 to 10 GW of solar and wind capacity ($15 billion), localizing RES equipment production ($2 billion), building 30+ GW of RES for hydrogen production ($38 billion), and constructing smart grids ($5 to 10 billion). The scale of these targets is ambitious to say the least.

Unfortunately, the highest potential for renewable energy is concentrated in regions that have been or are currently under Russian control. Developing renewables, particularly wind and solar, depends on Ukraine successfully recapturing these territories. The level of destruction across these regions could impede any new investment or development, as enabling infrastructure such as roads and grid networks may need to be rebuilt. Current installations may also have been damaged. Around 66 percent of solar and wind installations are in five regions: Odesa, Zaporizhzhia, Mykolaiv, Kherson, and Dnipro. These sites may require additional maintenance and repair as Ukraine retakes territory.

Significantly expanding generation capacity will occur in the later stages of reconstruction, but projects and initiatives in earlier stages will contribute to expanding green energy. Prior to the war, the rapid increase in renewable generation capacity caused grid imbalances and a growing need for balancing capacity and storage. The Ukrainian government had estimated that the grid would require around 2 GW of new peak-generation capacity and about 500 megawatts (MW) of energy storage capacity by 2025. Initial projects in grid-scale battery storage had seen significant private sector and international involvement prior to the war. DTEK, the largest private investor in Ukrainian renewables, completed a 1 MW storage project in the city of Energodar at the beginning of 2022, with the support of Honeywell and SunGrid. Creating further partnerships between Ukrainian renewable and grid companies and U.S. and other international companies can further the country’s reconstruction plan.

Rolling out renewable generation will enable Ukraine to support the European Union’s climate ambitions through green electricity exports. Before the latest disruptions in the nuclear energy sector, some 55 percent of power generation in Ukraine came from nuclear. Renewables can potentially displace coal and natural gas in the sector. Full integration with the European grid will require progress on both regulations and technology, underscoring the importance of clear steps forward throughout the war and initial reconstruction.

Ukraine’s vision of a secure and green energy mix will require significant investment across the energy sector. But missed payments to energy producers under the FIT and revisions to the renewable energy policy environment had eroded investor confidence in the sector prior to the war. Ukraine will also be competing with many other countries aiming to expand renewable energy. Development finance institutions (DFIs) and multilateral development banks (MBDs) can help overcome these challenges. Three broad initiatives can support renewable development and investment in the sector:

Expanding renewable energy generation in Ukraine can bolster energy security and further Ukraine’s integration with the European Union. Rebuilding Ukraine’s energy system will be a time- and capital-intensive process. Attracting investment into the renewable sector will also require improvements to domestic policy surrounding renewables. While the war continues, international partners and Ukrainian leaders can identify projects that will strengthen the power grid through storage capacity expansion and interconnection with the European Union. The work being done to address the ongoing destruction of Ukraine’s grid can set the foundation for the longer-term reconstruction of the energy sector, while donor coordination and the expertise of different DFIs and MDBs will be invaluable for the renewable energy sector in Ukraine. Work on reforming and improving the renewable sector should begin today.