Do we need a new strategy to prevent terrorist attacks on the United States?

Fifteen years after September 11, terrorism has spread, gained favor among a new generation, and now casts an ever-larger shadow over the globe. The policies of the past two administrations—one Republican and one Democratic—have been successful in hunting down terrorists, destroying their safe havens, and preventing them from planning and executing attacks on the homeland. Despite this good work, the problem has only grown more urgent and severe. New and powerful movements have taken root. Terrorist groups around the world have used technology, the media, religious schools and mosques, and familial and fraternal networks to sell their twisted ideologies, justify their violence, and convince recruits that glory can be found in the mass murder of innocent civilians.

The executive branch has received almost $2.5 trillion for counterterrorism activities and operations since the 9/11 attacks.

There are no easy solutions to this problem. The United States has taken extraordinary steps to try to address it. These measures include: hardening and expanding physical barriers around sensitive locations and critical infrastructure; improving security procedures and screening at airports and other entry points; tightening controls on people entering the country; and strengthening investigation and prosecution capabilities for terrorism-related cases. More than 263 government entities were either created or reorganized to implement these reforms. Chief among them were the Department of Homeland Security, which integrated all or part of 22 different federal departments and agencies to unify domestic counterterrorism efforts, and the Transportation Security Administration, which centralized and standardized airport security.

The United States simultaneously invested vast sums on countering terrorism abroad and building the capacity of partner security and intelligence services. According to estimates, Congress has appropriated $1.6 trillion to the Department of Defense (DoD) for war-related operational costs since September 11. Intelligence budgets have also significantly increased. In 2007, Congress appropriated $43.5 billion to the National Intelligence Program (NIP). Ten years later, the budget requested for the NIP rose to $53.5 billion. When combined with an estimated $123.2 billion for relevant State Department and Foreign Operations, the executive branch has received almost $2.5 trillion for counterterrorism activities and operations since the 9/11 attacks. 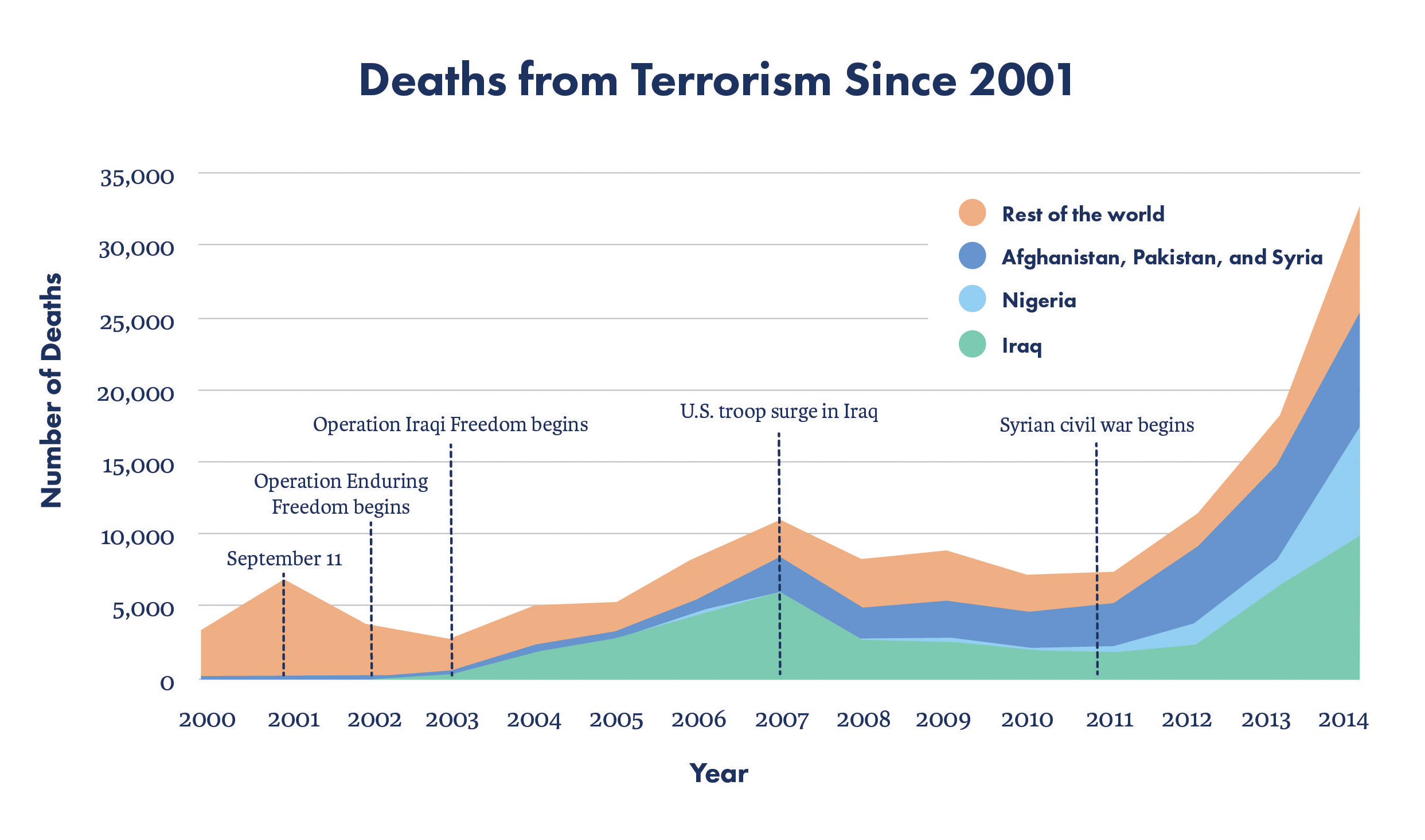 In many respects, the massive human and financial resources devoted to security since September 11 have made us safer. It is more difficult for terrorists to get into the United States and, if they do, harder for them to pull off a complex attack. However, in an era of social media, domestic radicalization, and lone wolf attacks, it is clear that military, intelligence, and law enforcement strategies alone are insufficient to eradicate the threat. Combating terrorism is both a “battle of arms and a battle of ideas—a fight against the terrorists and their murderous ideology,” as the 2006 National Security Strategy put it.

We have undoubtedly failed when it comes to the battle of ideas. Both the Bush and Obama administrations made some attempts to confront extremist ideologies and narratives, but prevention has never received sustained attention and focus, nor has it had the desired effect. One only has to look at the rise of the Islamic State (ISIS) and its unprecedented use of digital platforms to recruit fighters and inspire terrorist attacks all over the world. Instead of continuing to pursue complex 9/11-style attacks, these terrorists have adapted, transitioning to plots that can be executed by small groups or individuals, against soft targets, using less sophisticated and easy-to-acquire weapons. Such attacks do not require extensive training, planning, or coordination, making them harder to spot, but no less lethal. These groups have been better at adapting to our efforts than we have been at adapting to theirs.

Take the way terrorist groups have become more proficient at using social media and modern communications tools to target recruits, build their brand and market share, and expand their reach globally. Personal connections and one-to-one interactions remain central to terrorists’ recruitment tactics. But, digital platforms serve as a powerful amplifier and accelerant, allowing terrorist groups to target a much broader audience. Wannabee terrorists can consume propaganda, get inspired, and learn how to execute an attack—without ever leaving their homes. The widespread use of social media has also made violent extremists’ plans more difficult to identify and disrupt. Security agencies now have the added challenge of isolating genuine threats from a sea of noise.

Terrorism today is therefore more atomized, pervasive, and challenging to counter than it was at the turn of the century. Going forward, terrorists will likely seek to evade improved law enforcement and intelligence capabilities and border controls by calling on national citizens or green card holders—without a criminal record or known terrorist ties—to conduct attacks. As such, “homegrown extremism” presents a growing challenge in the United States and elsewhere. Violent extremist groups are also diversifying their recruitment pool, reaching out to women and older and younger generations who are not yet as closely watched by security agencies. Terrorists have already started recruiting children in their pre-teens—a trend that is likely to accelerate—and women are increasingly found in high-profile roles as supporters, mobilizers, and members of terrorist groups.

If the past 15 years have taught us anything, it is that we will never reduce the violence caused by terrorist groups until we blunt their appeal.

This evolution will require a fundamental shift in the way we counter terrorism. We can no longer rely on purely kinetic and law enforcement approaches and expect the same degree of success. Of course, these tools will remain essential for taking terrorists off the battlefield, disrupting plots, and safeguarding our borders. However, if the past 15 years have taught us anything, it is that we will never reduce the violence caused by terrorist groups until we blunt their appeal.

What is needed now is a comprehensive strategy to discredit violent extremists’ murderous and twisted ideology and a well-resourced operational plan to confront this threat over the next 15 years. Such a strategy must view terrorism as a global, generational, and ideological struggle. It requires mobilizing and empowering parents, teachers, peers, religious leaders, and other grassroots actors—those closest to would-be terrorists—to detect risks to public safety and intervene quickly to deflect someone from the path of radicalization. Civil society and community leaders are also in the best position to compete with and overtake violent extremists’ narratives in virtual and real spaces. However, they need greater political and financial support and training to play this crucial role.

Progress will also require addressing the underlying grievances and aspirations that make individuals open to the siren call of violent extremism. While we know that there is no single variable explaining why people join violent extremist groups, we have learned that terrorism thrives where marginalization, injustice, and oppression reign and where people are struggling to find an authentic identity and sense of purpose. Joining a violent extremist movement is, for many, an aspirational act—an opportunity to gain power, prestige, and status; to address perceived injustice; or to participate in a utopian effort to remake the world.

To prevent catastrophic attacks in the future and protect a new generation from being exploited by terrorist groups, we must find partners willing to help create meaningful opportunities for people to contribute to the political, social, and economic fabric of their societies in positive and sustainable ways. This will require a major reorientation of our approach and surge of investment in bottom-up, civilian-led, and long-term efforts in making communities inhospitable to extremist ideologies and narratives.