If the Trump administration decides to junk the North American Free Trade Agreement (NAFTA), the United States would be free to raise tariffs on Mexico and Canada 180 days after formal notification to Congress. In response, either or both countries could decide to retaliate. In Mexico’s case, its ability to inflict severe damage, especially on U.S. farmers, is far greater than the United States’ ability to do the same. Furthermore, if Mexican authorities choose to shut down even a portion of the $18 billion of agricultural goods that U.S. farmers export to Mexico, the effects would be huge. One such effect could be the ability of Republicans to hang on to House seats in farm states next year.

Mexico’s asymmetric advantage has to do with its commitments to the World Trade Organization (WTO). WTO tariff rates don’t really matter when a free-trade agreement exists, as NAFTA has since 1994. But if NAFTA goes away, Mexico and Canada could apply what is known as the “bound” rate to imports from the United States, that is, the maximum allowable tariff that a country has promised not to exceed for a given product. While the United States and Canada have steadily lowered their bound rates during successive rounds of trade negotiations, Mexico has not.

If applied fully, Mexico’s post-NAFTA bound rates would be devastating for American farmers. Although Mexico’s average bound rate is 35 percent, this masks higher average agricultural tariffs. The full rates, reaching as high as 156 percent, would essentially stop some U.S. exports and sharply curtail others. The pain would not be spread equally, since most of these commodities are produced in the Midwest, California, and Texas. For instance, the top five producers of both corn and soybeans—our biggest farm exports to Mexico—are Nebraska, Iowa, Illinois, Indiana, and Minnesota. Last year corn exports to Mexico hit $2.6 billion, and soybeans exports reached $1.5 billon. If NAFTA goes away, Mexico could impose a tariff up to 36 percent on corn and 45 percent on soybeans. 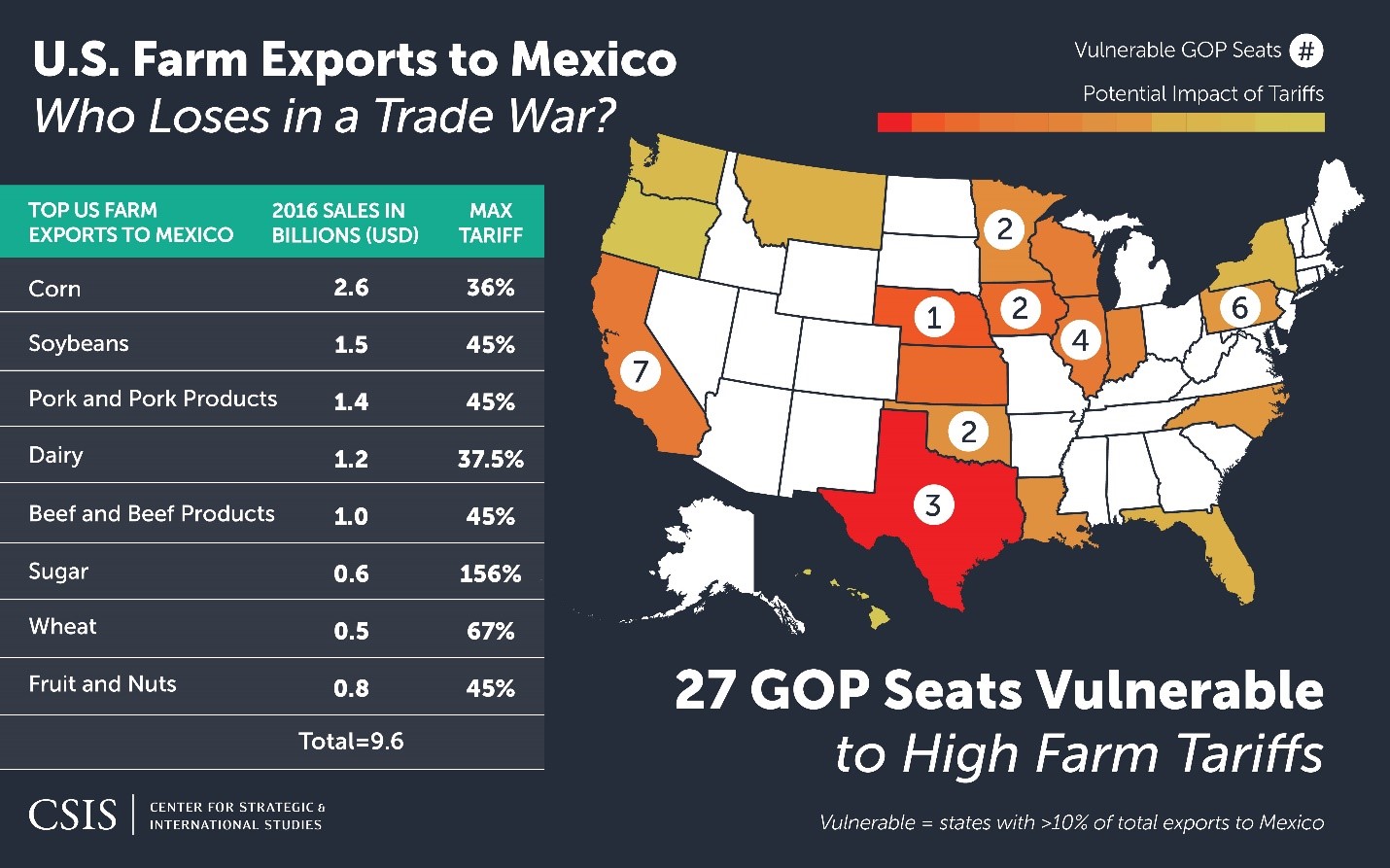 Lining up other commodities suppliers would not be difficult for Mexico. With 10 free-trade agreements in place that cover 45 countries, Mexico could not only buy corn, but also milk from Brazil, as well as wheat, beef, and soybeans from Argentina, fruit from Central America, and sugar from the Caribbean. For that matter, it could import more from China—its second-largest trading partner after the United States—from which it bought almost $70 billion in imports last year, including about $2.2 billion in commodities. Although the transportation costs probably would be higher, they would easily be offset by the huge U.S. tariff differentials. Mexican consumers, on the other hand, would not be pleased by having to shoulder higher prices due to an aggressive Mexican tariff strategy against the United States.

Unhappier would be American farmers, and all whose jobs depend on agriculture in the United States. The economic shock of losing Mexico as an export market may translate into political tremors during the U.S. midterm elections next November. If voters blame Republicans for the trade war, about 27 GOP House seats and two Senate seats (Texas and Arizona) could be in jeopardy. California, for instance, has seven House seats held by GOP incumbents that are considered “competitive” by political expert Larry Sabato of the University of Virginia. Last year, over one-sixth of California’s $164 billion in exports headed to Mexico, including dairy, beef, fruits, and almonds, all of which face job-killing tariff hikes if NAFTA disappears. Texas exports $92 billion of goods to Mexico, including beef and sugar. In addition to three GOP House candidates in competitive races, it has Senator Ted Cruz up for reelection. Likewise, six Republican seats are in play in dairy products from Pennsylvania (subject to a 37.5 percent tariff), and another four GOP seats in Illinois, one of the country’s top five producers of corn (36 percent), soybeans (45 percent), and pork products (45 percent).

The United States’ ability to retaliate in kind would be limited because our bound tariffs are lower, and we import far fewer commodities from Mexico. On average, the U.S. bound tariff is 4 percent, although our tariffs on agricultural products are also higher than average. For instance, the United States also could impose a 35 percent tariff on corn, but we don’t import any from Mexico. What about the commodities we do import? The Trump administration could go after beer with a tariff of 1.3 cents per liter (4 cents a six-pack) or 33.1 cents per kilo on avocados (about 5 cents per avocado)—not exactly enough to ruin a Super Bowl party. But even those modest price hikes are likely to be offset by a devaluation of the peso, caused in no small part by the end of NAFTA.

Mexico’s asymmetric leverage in the event of a trade war, especially in farm states with vulnerable GOP incumbents, is one of the main reasons such a war will not happen. (The other is the massive disruption to automotive supply chains across North America.) The U.S. Chamber of Commerce and state trade officials are belatedly making the case to lawmakers that a post-NAFTA America would not be filled—among other things—with amber waves of grain.