Southeast Asian economies are taking a huge hit in the global economic crisis caused by the spreading pandemic. The economic impact will be huge, on par with the fallout of the 1997-98 Asian Financial Crisis, or perhaps much greater. On the one hand, Association of Southeast Asian Nations (ASEAN) economies are better prepared than they were in the Asian Financial Crisis that hit the region more than two decades ago, with larger foreign exchange reserves and overall better macroeconomic positions compared to their situation in the late 1990s. However, the economic shock from Covid-19 may be deeper and longer lasting depending on how the pandemic plays out, and there is vast uncertainty surrounding the ongoing spread and ultimate containment of the virus.

At a minimum, we can expect to see a sharp slowdown or recession in all of the ASEAN economies in 2020. Recent forecasts from the World Bank, the Asian Development Bank (ADB), and today’s just released IMF World Economic Outlook all see sharp declines in regional growth as a result of the economic shock of this pandemic, but they offer a range of projected growth—which interestingly appears tied directly to the timing of the reports (see table below). The IMF projects ASEAN-5 (Indonesia, Malaysia, Philippines, Thailand, and Vietnam) growth at -0.6 percent in 2020, down from its earlier forecast of +4.8 percent. The  ADB's Asian Development Outlook, which was released earlier in April, forecasts that Southeast Asia will track closely with China and decelerate growth to +1 percent in 2020. The World Bank report, released in the beginning of April, includes both a baseline and a more pessimistic scenario, with the “lower-case” forecast projecting contractions of the major developing ASEAN countries in the -0.5 percent to -5.0 percent range, with the exception of Vietnam, which maintains positive (+1.5 percent) growth. Although they measure a slightly different group of countries, the worsening of economic conditions and the ongoing spread of the crisis has lowered forecasts by these international financial institutions (IFIs) over the course of just a few weeks. Many private forecasts paint an even bleaker picture for ASEAN growth, projecting growth in the range of -1.5 percent for 2020. 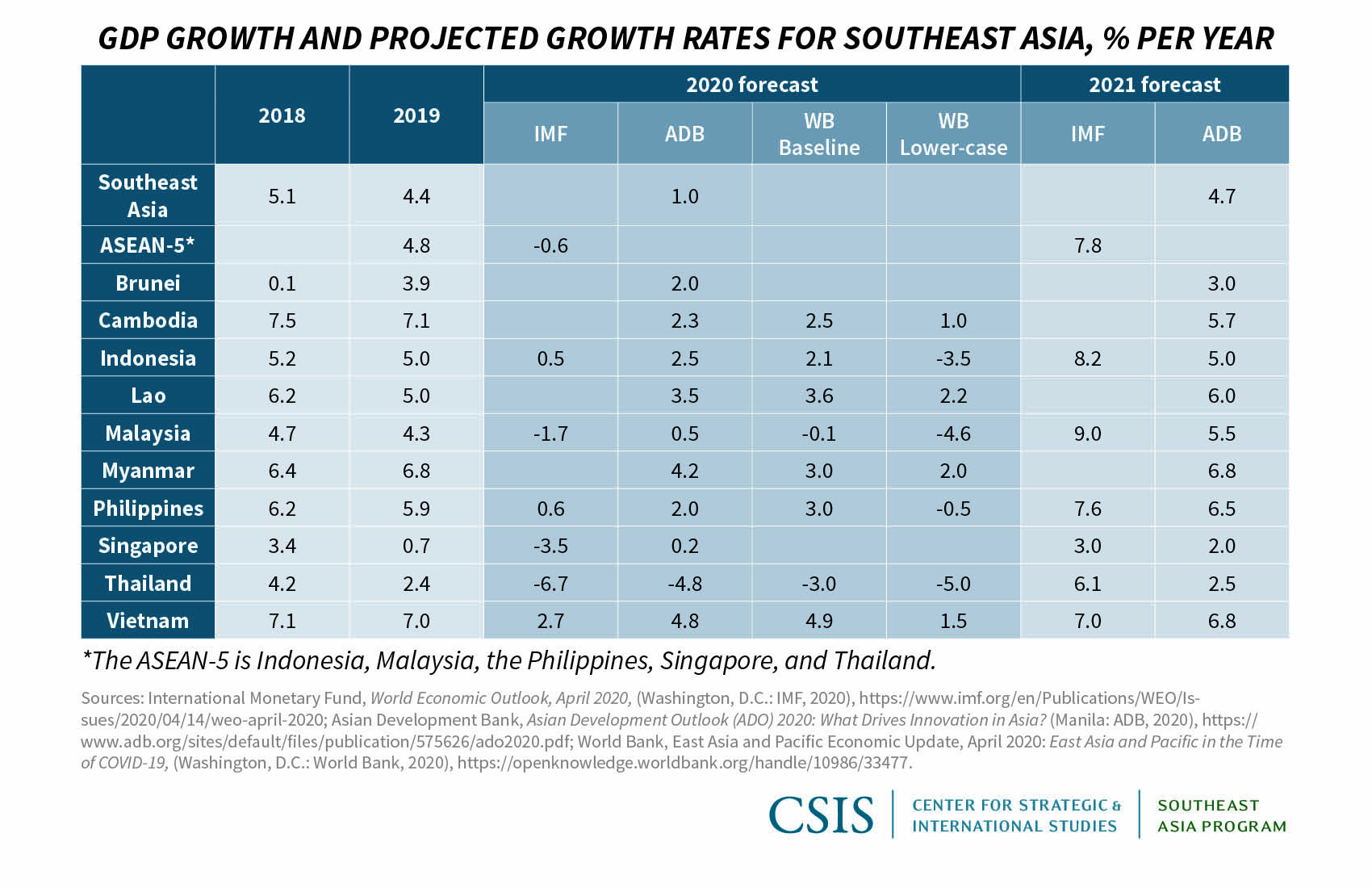 Despite the increasingly pessimistic forecasts for the region, both the IMF and ADB project a strong rebound in 2021.The IMF projects growth for the ASEAN-5 to bounce back to +7.8 percent in 2021, while the ADB sees growth for Southeast Asia rebounding to +4.7 percent next year. In short, they see the global economic crisis brought on by the Covid-19 pandemic as a huge but relatively short-term shock. Only the “lower-case” scenario of the World Bank foresees a slower recovery, with the major ASEAN economies still in negative growth territory in 2021, again with the exception of Vietnam.

Country-specific impacts will depend on the structure of each economy and their initial economic conditions heading into the crisis. Hardest hit will be Thailand, which was already struggling in 2019 and early 2020 with a severe drought, budget delays, and a strong currency and was somewhat slow to respond to the onset of the pandemic. All three of the April IFI reports forecast a major contraction for Thailand in 2020 in the range of -4.8 percent to -6.7 percent. The closely entwined economies of Malaysia and Singapore are forecast by the ADB to see close to 0 percent economic growth this year, with only Malaysia expected to rebound strongly next year. However, the IMF projects recessions for both economies in 2020, with Singapore projected at -3.5 percent growth and Malaysia at -1.7 percent. Singapore’s own projections by its Ministry of International Trade and Industry have been revised down to between -0.5 percent and -4 percent growth this year, with the lower end more likely now that Singapore is combating a second wave of infections and will likely be forced to further shutter economic activity. Indonesia and the Philippines are forecast to see sharp deceleration of growth, with the IMF projecting growth in the barely positive range. Vietnam stands out in all these forecasts as the only ASEAN economy to maintain moderate growth in 2020, in the range of +2.7 percent (IMF) to +4.8 percent (ADB), and is expected to strongly rebound in 2021 (+6.8 percent to +7.0 percent growth).

The impact of the Covid-19 crisis is hitting these economies through several channels. First, ASEAN countries are highly open to trade and investment as well as tourism, all of which have been severely disrupted by the spreading global pandemic. Demand for these countries’ exports—whether palm oil and metals from Indonesia; manufactured components from Malaysia, Vietnam, and the Philippines; or textiles from Cambodia—have fallen sharply and will continue to stagnate throughout the crisis. The suspension and likely very slow resumption of tourism will hit the Thai economy especially hard, which depends on tourism and travel spending for one-fifth of its GDP, and will also impact the tourism-dependent economies of Malaysia, Indonesia, Philippines, and Vietnam. Singapore had already been hit by declining trade volumes in the midst of U.S.-China trade conflict in 2019 and is now facing a further drop in trade in goods as well as declining services trade and tourism.

ASEAN economies have a diversified set of trade and investment partners, including the United States, European Union, China, and intra-ASEAN trade. In normal times, this diversified portfolio of partners would provide a buffer for a regional economic downturn, but in this global pandemic all of these partners are facing a halt to or dimming prospects for growth for the first three quarters of 2020—with bleak forecasts for China (+1 percent growth), the United States (-6 percent), Japan (-4 percent), and the Eurozone (-7 to -8 percent).

Second, the collapse in oil prices caused by the sudden drop in energy consumption due to the widespread lockdowns and travel bans will have a sharp impact on economies dependent on exports of fuel, namely Indonesia, where coal and oil comprise nearly one-quarter of exports; Malaysia, where oil and gas make up about 16 percent of exports; and of course Brunei, whose economy is almost entirely supported by exports of crude and natural gas (over 90 percent of exports).

Third, the sharp drop in domestic demand due to lockdowns and other public health measures will have large multiplier effects on these economies, since consumption represents about 60 percent of GDP in the major ASEAN economies, with Singapore being an exception. The fourth channel of economic impact from the global Covid-19 crisis is capital outflows. Whereas foreign direct investment is generally sticky, international portfolio investors in emerging market equities and bonds have driven large capital outflows as they seek safe havens in the face of the deepening global pandemic. According to the Institute of International Finance, capital outflows from emerging markets have totaled nearly $100 billion so far this year, with Southeast Asian economies taking a sizeable hit. Indonesia has seen an outflow of $8.2 billion in capital by the end of March. These outflows have led to regional currency depreciations, especially the Indonesian rupiah, which has depreciated 14.5 percent year to date, while the Thai baht, Malaysian ringgit, and Singapore dollar all depreciated by more than 4 percent in the March 2-19 period. Central banks in the region have also intervened to support their currencies, but tightening financial conditions complicate their efforts to maintain accommodative monetary policy and shore up their economies in the face of the Covid-19 crisis.

Over the longer term, it is difficult to predict the ultimate economic impact on Southeast Asia because there is vast uncertainty about how the pandemic will play out over the next several months and beyond, and how the crisis will reshape the global economy. It is likely to intensify the ongoing process of reshoring capacity away from China and the rest of East Asia. Although certain sectors in some Southeast Asian economies have benefited from recent supply chain shifts out of China, it is less clear that post-pandemic trends will be as favorable. National security considerations in the United States and other advanced economies now loom large over questions about pharmaceutical ingredients and inputs for and production of medical supplies, while travel disruptions and difficulties in the form of quarantines, health certificates, and fear of travel will likely further accelerate the shortening of supply chains.

On the brighter side, the shift of economic activity to the cloud and the need for mobile tracking and other tech solutions to contain and respond to future outbreaks of the virus could benefit Southeast Asia, in particular countries like Singapore, Indonesia, and Vietnam, which are already on the leading edge of the mobile-app-based digital economy. A global or regional shift in demand toward digital applications, and government policies designed to support this sector, could spur innovation and boost entrepreneurs working on the digital economy, which would brighten the growth and development prospects for Southeast Asian economies once we get to the other side of this global crisis.

Amy Searight is senior adviser and director of the Southeast Asia Program at the Center for Strategic and International Studies (CSIS) in Washington, D.C.