On February 7, 2021, over 13 million Ecuadorian voters across the country’s 24 provinces will cast their ballots for president and vice president, the 137-seat National Assembly, provincial legislatures in all 24 provinces, and members of the Andean Parliament—the governing and deliberative body of the Andean community, which encompasses Bolivia, Colombia, Ecuador, Peru, and Venezuela. Whomever wins the upcoming elections will have to address the country’s main problems, which, according to public opinion polls, Ecuadorians perceive to be an economic crisis, poverty, and debt; unemployment and underemployment; corruption and justice; the Covid-19 pandemic; insecurity and violence; and education.

Andrés Arauz is the center-left presidential candidate of Union for Hope (Unión por la Esperanza, UNES), created in 2020 as an amalgam of eight organizations that support former president Rafael Correa. The alliance is led by the Citizen Revolution Movement (Movimiento Revolución Ciudadana), which Correa founded in January 2018 after he resigned from the ruling Alianza PAIS Party. Arauz is a 35-year-old economist who has never run for office and has little name recognition but was handpicked by Correa to be the UNES presidential candidate, thus explaining his rapid rise in the polls immediately upon entering the election. Despite his youth and relative anonymity, Arauz does have some economic and political experience, having served as a director in Ecuador’s Central Bank and as minister of knowledge and human capital under Correa. It is widely believed that if Arauz wins, Correa would actually be the one governing, albeit by proxy. Proxy or not, Arauz is certainly widely recognized as Correa’s protégé, and many in Ecuador question whether Arauz—if victorious—will resemble the demagogue Correa of 2007 or the pragmatic Correa of 2013.

Guillermo Lasso Mendoza is the center-right candidate for the Creating Opportunities Movement (Movimiento Creando Oportunidades, CREO) and the Social Christian Party (Partido Social Cristiano, PSC). He is a banker turned politician, which is reflected in the technocratic orientation of the CREO-PSC platform. He was appointed vice president of FINASUR Bank in 1984. FINASUR later merged with Guayaquil Bank, where he rose to the role of executive vice president and general manager, and then executive president from 1994 until 2012. He is also president of the nonprofit Ecuador Libre Foundation.

Lasso is no stranger to presidential elections. He ran in 2013 and again in 2017 as the presidential candidate for CREO, both times placing second with 22.7 and 28.1 percent of the vote, respectively. In this third go-around, Lasso’s odds appear to be improved, with the PSC victorious in prefectures in seven provinces in the 2019 local elections—Esmeraldas, Cañar, and Bolivar on its own, and Guayas, Santa Elena, Pastaza, and Imbabura in an alliance.

Yaku Pérez Guartambel is the leftist candidate of the Pachakutik Plurinational Unity Movement (Movimiento de Unidad Plurinacional Pachakutik, MUPP). He was born in Azuay Province, where he was elected to the Cuenca City Council in 1994 and won the Azuay Prefecture in 2019. Prior to entering politics, he served as president of the Confederation of Peoples of the Kichwa Nationality of Ecuador.

Beyond his name recognition as an indigenous leader and environmental advocate, Pérez also benefits from the MUPP’s party machinery; in the 2019 local elections, MUPP won the prefectures in six provinces—Azuay, Tungurahua, Morona Santiago, and Napo on its own, and Pastaza and Cotopaxi in an alliance.

What Do the Polls Say?

The CNE has registered a total of 19 pollsters for electoral forecasts and 3 for exit voting, which makes the field of polling firms more crowded than the presidential race itself. While the polls differ in their projections for which candidate will place first or second between Arauz or Lasso, and by what margin, they all place Pérez in third place. 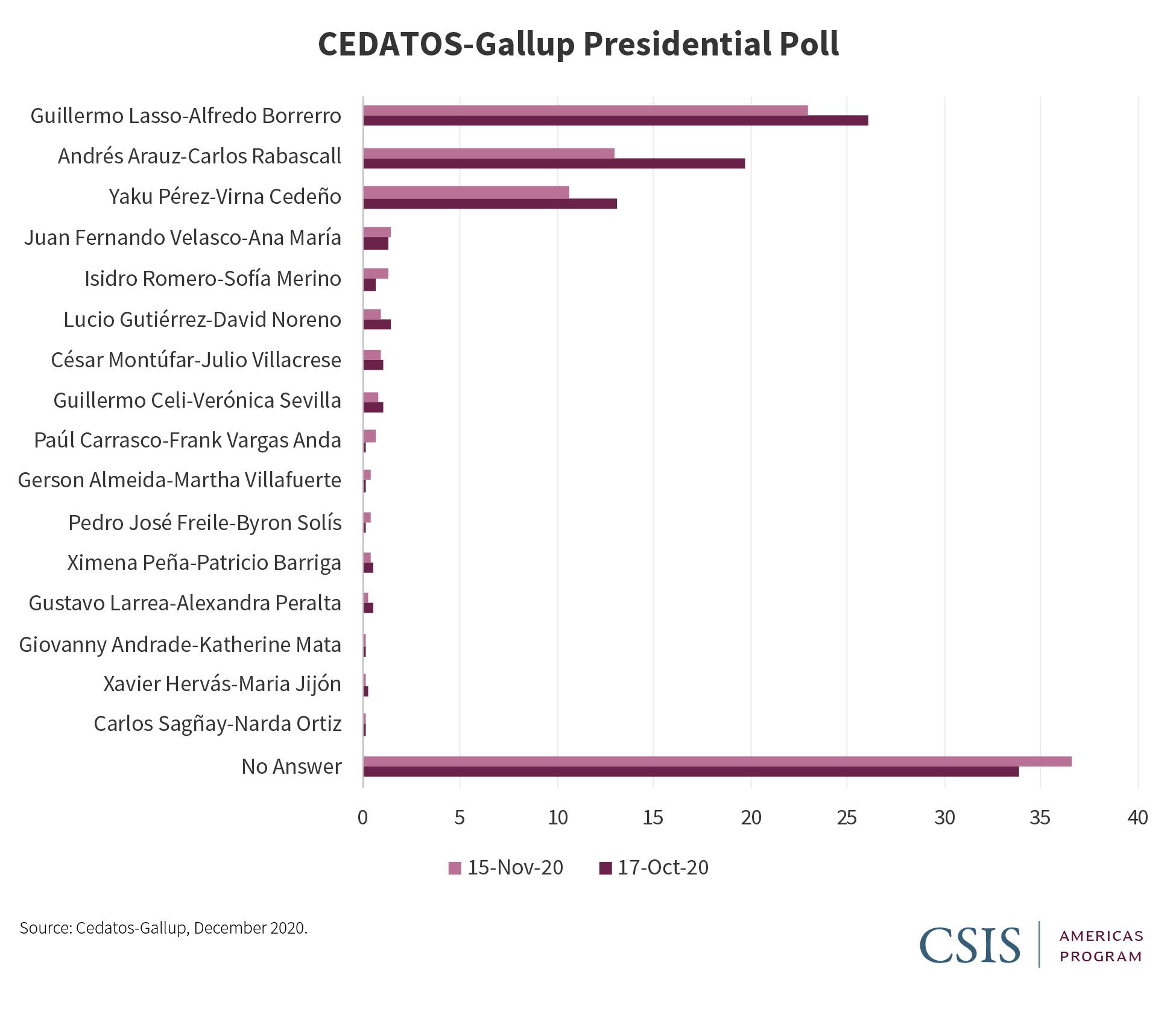 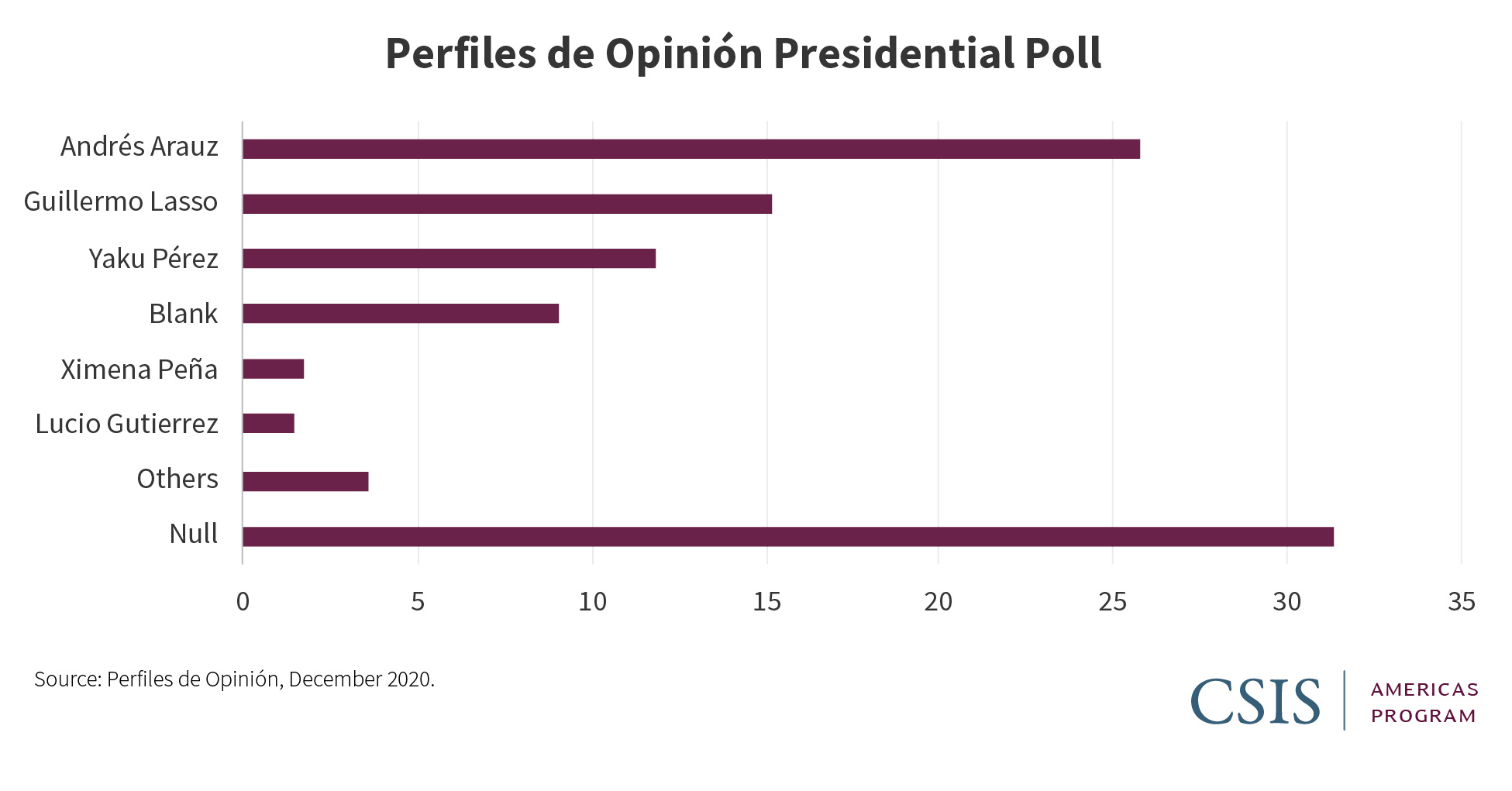 In an electoral scenario where no candidate wins a majority, and Arauz and Lasso end up as the top two vote-getters, Pérez could be decisive in the outcome of the April 11 runoff. Some believe that in such a scenario Lasso would be advantaged, since Pérez—a victim of Correa’s political persecution—would throw his support behind Lasso. Still, others doubt Pérez could deliver the vote of the MUPP, contending that the indigenous movement would never support Lasso, whom they regard as a capitalist banker.

That said, many—if not all—of the public opinion polls show a high percentage of undecided voters, which could conceivably translate into either a surprising first-round victor, although a runoff remains the most likely result. Once elected, whether on February 7 or on April 11, the president- and vice president-elect will be sworn in on May 24, 2021.

Ecuadorians on February 7 will also cast their votes to elect members of the 137-seat National Assembly. Based on presidential public opinion polls, it is likely the parties of the three top candidates will end up with sizable blocs in the National Assembly. In such a scenario where no single party enjoys a legislative majority, building a consensus necessary to pass much-needed structural reforms will be difficult, requiring the next president to instead rely on presidential decrees. All 137 members of the National Assembly will be sworn in on May 14, 2021, at the start of the Ordinary Session.

Regardless of the results of the election—and whether the outcome is decided on February 7 or April 11—Ecuador’s next president will still have to manage the Covid-19 pandemic, revive economic growth, and reduce unemployment and high public debt in an already fragile economy.

The World Health Organization’s (WHO) Global Covid-19 Dashboard registered 250,986 confirmed cases and 14,890 deaths in Ecuador as of February 2, 2021—the sixth-highest number of deaths in Latin America and the Caribbean after Brazil, Mexico, Argentina, Colombia, Peru, and Chile (listed in descending order). Although initial vaccinations of frontline workers and seniors in Guayaquil and Quito commenced on January 21, 2021, the new president will need to ensure a sufficient supply of vaccines and effective nationwide distribution of them.

As illustrated in Figure 3, the decline in GDP growth, which began in 2011 after Ecuador emerged from the global recession, is linked to the generally steady decline in the price of oil.

Although former president Lenín Moreno enjoyed GDP growth of 2.4 percent during his first year in office in 2017, GDP resumed its decline thereafter, dropping to 0.1 percent growth in 2019. As such, Ecuador’s economy was already precarious when the WHO declared the Covid-19 outbreak a global pandemic on March 11, 2020. The economic impact of Covid-19 drove the steepest drop in GDP growth in the country’s history, a projected -11.0 percent for 2020. 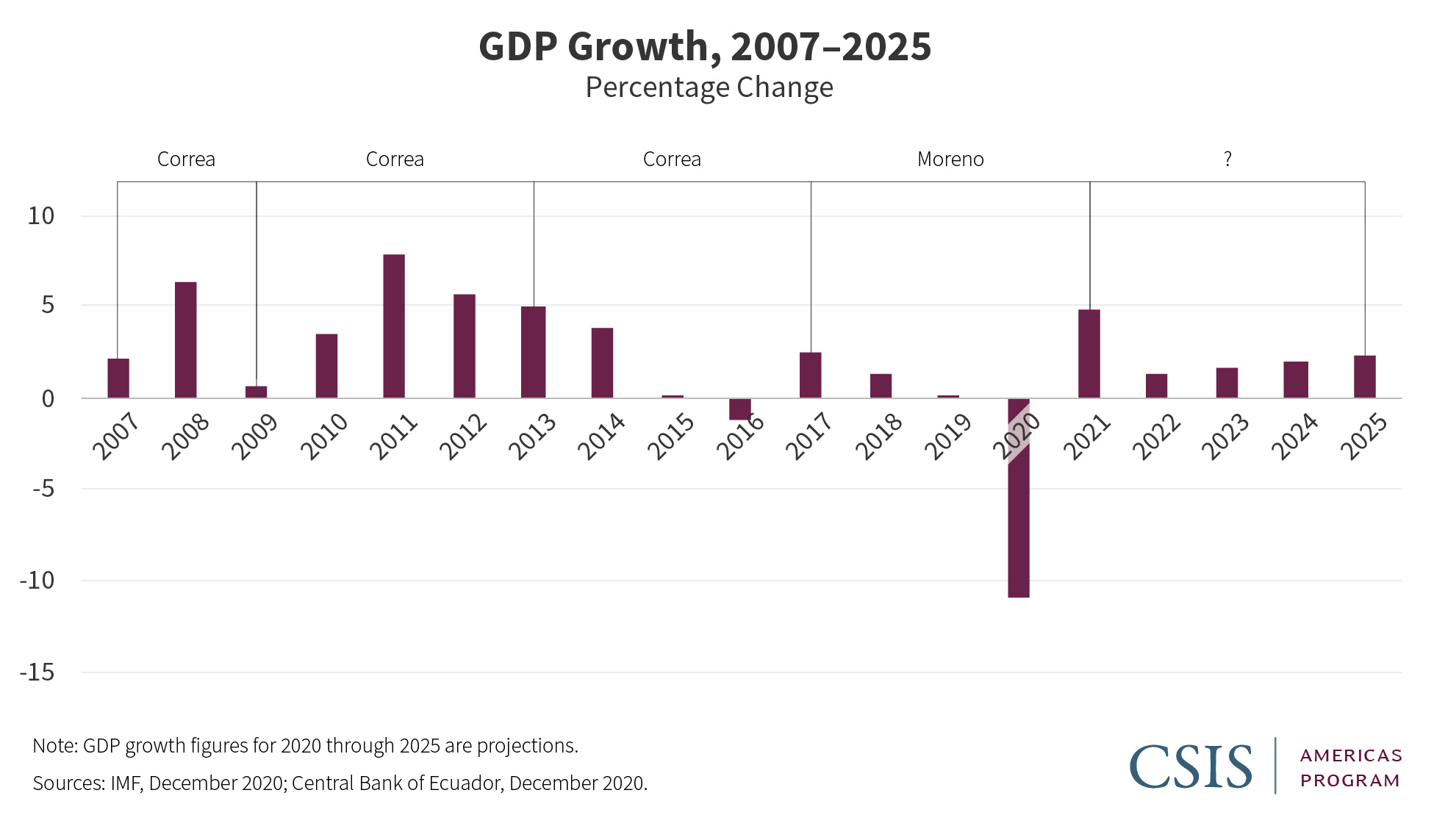 The precipitous economic contraction in 2020 was driven largely by Covid-19-related factors:

The nationwide Covid-19-related shutdown and its devastating impact on the Ecuadorian economy led to an estimated 1.2 million job losses during the first half of 2020. The Moreno government fully lifted the nationwide curfew in mid-September 2020, and it is reported that some 800,000 jobs were also created in the third quarter of 2020. However, this figure is deceiving since many of these jobs were no longer full time, nor were they renumerated at the same wage levels as pre-pandemic ones.

Although public debt is projected to reach 68.9 percent of GDP in 2020 and 67.4 percent in 2021, it is still below the critical threshold for emerging economies of 70.0 percent of GDP. Even though the IMF projects that public debt will decrease, this will depend on the next government’s commitment to pursuing a stringent fiscal policy and debt-to-GDP ratio.

As Ecuador’s economy is dollarized, there is less risk associated with its largely external public debt, for Ecuador would not be susceptible to the danger that non-dollarized countries encounter when their currency devalues and their debt multiplies. The one downside of Ecuador’s dollarized economy, however, is that it could detract from its own competitiveness when compared to other countries in the hemisphere with weaker currencies.

To prevent an all-out collapse of the Ecuadorian economy, President Moreno’s government negotiated with the International Monetary Fund (IMF) a 27-month Extended Fund Facility (EFF) arrangement, which was approved on September 30, 2020. The EFF, which extends to December 30, 2022, provides Special Drawing Rights of about $8.6 billion. Ecuador’s economic difficulties were exacerbated by a delay in the planned $1.7 billion in financing from China for 2020 and Ecuador’s loss of access to international capital markets due to its relatively high public debt. For the IMF to approve the EFF, the Moreno administration had to undertake some prior actions and commit to a series of structural benchmarks to strengthen the central bank, increase transparency in the spending of public monies, and enhance tax revenue collection statistics.

Ecuador’s next president should support the IMF-prescribed actions and benchmarks, but despite the severity of the economic crisis and the favorable budgetary impact of the IMF’s EFF for the national government, Arauz and Pérez have stated that, if elected, they would renegotiate the program. While their remarks can be construed as campaign rhetoric, they do nonetheless introduce an element of risk, given their populist leanings and periodic attacks on neoliberal economics.

U.S.-Ecuadorian relations were rekindled during the Trump administration, with President Trump hosting Moreno at the Oval Office on February 12, 2020, the first time a president from Ecuador had met with a U.S. president in Washington in 17 years.

On January 12, 2021—eight days before President Joe Biden assumed office—the U.S. International Development Finance Corporation signed a framework agreement worth up to $2.8 billion to refinance debt and support private sector investment in Ecuador. Given the polarized nature of U.S. politics, the timing of the deal has cast doubt over its substantive underpinning. Partisan politics aside, it is clearly that the health and economic impact of Covid-19, coupled with low oil prices, have had a devastating impact on Ecuador, placing Ecuador’s next president in a very difficult situation.

As the Biden administration reviews its foreign policy toward the Western Hemisphere, it will have an opportunity to reengage Ecuador in order to advance Washington’s strategic interests while also addressing Ecuador’s need to stimulate its economic recovery regardless of the outcome of the elections.