For a long time Democrat, albeit one who spent 17 of his 20 years on Capitol Hill working for Republicans, the election outcome brought a sense of relief that perhaps now we can move on—or back—to a time when politics was civil and when people could disagree without being disagreeable. No such luck. It appears that is not going to happen despite the best efforts of the incoming president to take us there.

Much has been written, and no doubt more is coming, about how President Trump’s actions are a threat to democracy and our very system of government. I think that is right, but I also see more ominous trends because the vote and our conduct of the election, as well as our handling of the pandemic, have effectively exploded two American myths that have been the foundation of our position of global leadership.

The first to go is the myth of American exceptionalism—that we are somehow special because our country was founded on the basis of fundamental principles like freedom and democracy. What the election and our collective behavior before and after have shown the world, sadly, is that we are not exceptional. In fact, we are just like everybody else: tribal, violent, racist, and selfish in our determination to put our own interests ahead of others, even when health or livelihoods are at stake. We are intolerant of others’ beliefs and lifestyles, and we stubbornly cling to our own perceptions regardless of reality. We buy into a culture of grievance and victimhood, that all our problems are somebody else’s fault—foreigners, our own feckless leaders and elites, ordinary people of other races and cultures, even the next door neighbor with a yard sign supporting the other party. This is not true of everybody, just as it is not true of everybody in other countries, but the behavior of many of us has taken over the narrative of what the United States is and what the United States stands for, and we don’t look good.

The second to go is the myth of American competence. It turns out we are not competent. We cannot manage an epidemic, and we cannot manage an election. Our ineptitude has exposed our weaknesses to the rest of the world and has played into China’s narrative that an authoritarian political model and a statist economic model work better than Western market democracies. We are proving their case every day. It is ironic that a president focused on projecting his own strength has instead exposed our weaknesses.

Much of this is due to our preoccupation with rights rather than responsibilities. John F. Kennedy called my generation to public service saying, “Ask not what your country can do for you—ask what you can do for your country.” In the intervening years, that has been turned around. Today, we demand our rights—the right to carry a gun, the right not to wear a mask, and more. Instead, we would be better off talking about how to be a responsible gun owner and promote public safety rather than threaten it, and about our responsibility to slow down the spread of Covid-19 by wearing a mask.

Can we change? The president-elect will try to do that. As Lincoln did, he will appeal to the better angels of our nature and tell us it is time to bind up our wounds. I hope that works, but it will be an uphill battle. Republicans may know that Trump is dangerously wrong, but they also know that they deviate from his line at their political peril, at least as long as he is dominating the party, which it certainly looks like he will be doing long after January 20. Plus, he has acolytes on the way up with fewer rough edges.

So, I’m depressed. We’ve dug ourselves a deep hole, too few want to stop digging, and it’s not up to the politicians to rescue us. President Kennedy got that right too:

In your hands, my fellow citizens, more than mine, will rest the final success or failure of our course. Since this country was founded, each generation of Americans has been summoned to give testimony to its national loyalty. The graves of young Americans who answered the call to service surround the globe.

I hope we can work our way through this. The election gives us the opportunity. Whether we take it is up to all of us. 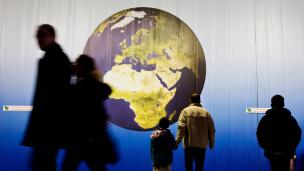 A Trade Policy for the 20s, Climate
By William Alan Reinsch
January 26, 2021
On Demand Event

U.S. and China Will Remain at Odds Under Biden as Beijing Flexes on Global Stage, Trade Expert Says
CNBC | Weizhen Tan
January 25, 2021
In the News

The China Trade War is One Thing Joe Biden Won't Be Rushing to Fix
CNN | Jill Disis
January 21, 2021
View all content by this expert